1851. Bloomer Class engine for the London and North Western Railway. 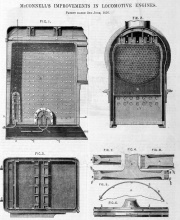 1846 One of the members of the committee established to draw up rules for a constitution of the Institution of Mechanical Engineers.

1862 After retiring from the LNWR, he went into business as consulting engineer in London.

JAMES EDWARD McCONNELL was born on the 1st of January, 1815, at Fermoy, Co. Cork, where his father, Mr. Quentin McConnell, possessed a fairly prosperous business in large ironworks.

He was left fatherless at the age of four, and came under the care of his uncle, Mr. Alexander McConnell, then resident in Ayr, where he spent most of his early years ; till, owing to a difference with his uncle, he was launched on the world with a capital of ten shillings.

He first obtained employment in the works of Girdwood and Co., of Glasgow, where he was regarded as a steady reliable workman, assisting the foremen and managers against the frequent difficulties arising in those days through trades-unions and strikes.

Later on he was engaged in the works of Vernon and Co, of Liverpool, as foreman, and while there superintended the erection of several horticultural buildings, and a great deal of machinery for the late Earl of Clare at Mountshannon.

In 1842, on the recommendation of Bury, Curtis and Kennedy, Liverpool, he was appointed Locomotive Engineer of the Bristol and Birmingham Railway.

On the 16th of February, 1847, he was made Locomotive Superintendent of the southern division of the London and North Western Railway, which post he held for fifteen years.

His patents, in 1853, of 'Improvements in Locomotive Engines' and of ‘Hollow Railway Axles' were decidedly successful. During the latter part of his connection with the London and North Western Railway, he worked with his engines the main line from London to Stafford and all its branches. On his resignation, in 1862, he received from the officials and employees a handsome service of plate, together with a flattering address.

At that time he bought an estate near the village of Great Missenden, and several commercial enterprises under his hands became great successes. He now took an office at Westminster, and commenced to practise as a mechanical engineer. He was largely engaged in the valuation of railway rolling stock, and in the assessment of railway property.

We announce with much regret the death of Mr. J . E. McConnell, which took place at Great Missenden, Bucks, on the 11th inst. Mr. McConnell's name is inseparably connected with the history of the locomotive, and his loss has deprived us of another of those men to whom the world owes a great deal, and whose presence carried the minds of the younger generation of engineers back to the past, when difficulties were overcome of which the existing generation can form but an inadequate idea.

Mr. McConnell was born in 1815, and served his apprenticeship to Messrs. Girdwood and Co., of Glasgow, and became there a competent workman. He was subsequently appointed foreman in the shops of Messrs. Bury, Curtis, and Co., of Liverpool1 where he may be said to have made his first practical acquaintance with the construction of the locomotive. We next find him with Messrs. Vernon and Co., of Liverpool; and he was subsequently manager of a machine shop in Manchester.

In 1842, when he was but twenty-seven, his railway career began. In that year he was appointed locomotive superintendent of the Birmingham and Gloucester Railway, which he held until 1847, when he was made locomotive superintendent of the Southern Division of the London and North Western Railway, which responsible post he filled for fifteen years - that is to say, up to 1862, when he retired from railway life, and thence up to the time of his death took private practice as a consulting engineer. He was elected an associate of the Institution 10 March, 1846, and was transferred to the class of member in February, 1851. He was one of the founders of the Institution of Mechanical Engineers.

Mr. McConnell gave much attention to the introduction of coal as a locomotive fuel, and the peculiar type of double furnace boiler which he designed is well known. The Chronicle of March the 13th, 1862, contains the following account of the presentation of a testimonial to Mr. McConnell on his retirement from the London and North-Western Railway :-

This was accompanied by an appropriate address, bearing 1966 signatures. On the occasion of the presentation, which took place at Wolverton, the meeting was presided over by the rural dean, the Rev. R. M. Russell. In the course of the various speeches delivered allusions were made to the labours of Mr. McConnell for the welfare of the workmen under his charge and their wives and families, by the establishment of schools, classes, and other educational means, the erection of churches, the foundation of a savings bank, a sick and benefit society, and other local institutions, amongst which, and not the least important, was the Mechanics' Institution, the foundation stone of which was laid in May last in the presence of the directors and principal officers of the company by his Grace the Duke of Sutherland.