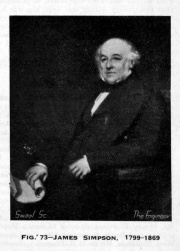 1799 Born in London on 25 July in the engineer's residence at the Chelsea waterworks where his father, Thomas Simpson was engineer; Thomas was later engineer of Lambeth water company too.

James Simpson worked and learned under his father's direction

1823 He inherited the position of chief engineer to both the Chelsea and Lambeth companies on his father's death.

1827 Simpson toured the water filtration operations at Glasgow and at industrial sites near Manchester and elsewhere in Lancashire.

1829 After more than a year of experiments with prototype filter beds, he completed a 1 acre filter bed at the Chelsea works.

Simpson trained his younger brother William Simpson (1809-1864) in engineering and aided him in the operation of a steam engine company in Pimlico, London, [3], Simpson and Co at Grosvenor Engine Works.

He provided a water supply for Windsor Castle and other royal palaces and was called on as expert to report on schemes for improvement of London's sewers.

1848 Partnership dissolved. '...us the undersigned, James Simpson and James Gascoigne Lynde the younger, as Civil Engineers, at Great George-street, Westminster in the county of Middlesex, expired on the 25th day of March instant...'[4]

Involved in waterworks for Cambridge, Cardiff, Carlisle, Exeter, London, York, Amsterdam, Copenhagen and elsewhere from the 1840s through the 1860s.

1856 York Water Co: note in archives suggests that James Simpson was asked to advise on method of operating the Beam engines; James Simpson (presumably the company) was ordered to remove the beam engines for scrap in 1918[5].

James had three sons, James and Arthur who were connected with engineering or engine manufacturing, and John who was an artist.[6]. At least four of his grandsons were engineers involved with waterworks.

1869 Died at his home, Westfield Lodge, Portsmouth Road, Kingston upon Thames on 4 March.

Mr. James Simpson, the fourth son of Mr. Thomas Simpson, the Engineer of the old Chelsea waterworks, formerly situated on the banks of the Thames, near to the present Victoria railway bridge, was born on the 25th of July, 1799, at the engineer’s residence on those works, and received there his first instruction in the profession of a civil engineer.

At the death of his father, in 1823, Mr. Simpson was appointed Engineer to the Company.

Amongst his earliest achievements must be mentioned that of the filtration of water on a large scale. About the year 1827 he was instructed by his Company to investigate that subject, and after examining into the previous efforts that had been made to purify water, which had been chiefly done for manufacturing purposes, he designed and executed, in 1828, at the Chelsea waterworks his first 'filter bed,' which had an area of about one acre, and which was so successful, that no material alteration has been made in the system of filtration since that time: similar filters being now in operation in almost every town artificially supplied with water.

The elder Simpson had, in the year 1785, assisted in establishing a small company for the supply of portions of Southwark and Vauxhall with water, and had erected pumping-engines on the south side of the Thames near the present Charing Cross Bridge.

To the management of these works his son also succeeded as Engineer, and the present high position of the Lambeth Waterworks Company is mainly due to the talent and energy displayed by Mr. James Simpson.

The construction of elevated reservoirs at Streatham and at Brixton, with the iron mains and pumping engines in connection with them, were amongst the earlier works performed, and the then operations of the company were hastened by the rapid spread of population in that district, as well as by the competition of the present Southwark and Vauxhall Water Company, which occupied at that time much of the same district, both companies striving to outstrip each other in extension of territory. This competition was closed about 1840, by arrangement between them, and the spread of the Lambeth works was rapid down to the year 1849, when, owing to the greatly increasing deterioration of the Thames water in and near London,

Mr. Simpson advised his company to take the bold step of removing the works to their present position at Seething Wells, between Thames Ditton and Kingston. The extensive filter beds and pumping station, constructed there in 1850, were the first which were designed for taking Thames water above tidal influence, and embrace, amongst other engineering features, the longest line of pumping main perhaps ever attempted, at all events until that period.

The success of the first removal of the Lambeth works, followed by the public agitation on the subject of the metropolitan mater supply, resulted in the passing of a general Act in 1852, obliging all the companies to remove their works above tidal flow.

In the following year Mr. Simpson induced the Chelsea Water Company to select a locality above Kingston adjoining the Lambeth works, and accordingly, by an Act obtained in 1853, the present extensive works of the former company were constructed, and were opened in 1856.

Early in life Mr. Simpson became the engineering adviser of the Government on many subjects. He constructed waterworks for the supply of Windsor Castle during the reign of his Majesty George IV., and in succeeding years he was more or less constantly engaged in designing or conducting water supplies to the royal palaces, as well as being consulted on various sanitary works in connection therewith, and he was thus to the period of his decease engaged in the service of the department of works, either as civil engineer designing works, or giving advice, or as a manufacturing engineer, constructing machinery for the Board of Works at his extensive works in Pimlico.

During his long career, Mr. Simpson was also extensively engaged on various large engineering works in different parts of the country. In 1842 he designed, and afterwards carried out, the long pier at Southend for landing from steamers at low water; and in the year 1843, Mr. Ralph Ward Jackson, M.P. (Assoc.Inst.C.E.), having conceived the ides of a wet dock there, as a rival to the old Hartlepool Harbour, sought Mr. Simpson's advice upon the subject, the result being that an Act of Parliament was obtained, and a dock and harbour, with other works, constructed; the nucleus of the present extensive town and port of West Hartlepool, which now ranks amongst the largest shipping ports for coal in the kingdom.

About the year 1845 Mr. Simpson was consulted by a new company formed at Bristol for the supply of water, and he designed the extensive works for bringing to that city springs and streams of water from the Mendip Hills. These works embrace all the features of a large undertaking of the kind, and have been completely successful, both in an engineering and commercial sense.

The sanatory requirements and measures of the period opened a great field for private enterprise, in the formation of companies and the construction of waterworks, in every town of any importance in the kingdom. Mr. Simpson being a leading authority, soon became extensively engaged in such works, and he constructed or improved works at many of the most important towns in this country, amongst which may be mentioned Newcastle, Liverpool, Manchester, York, Cardiff, Rending, Cambridge, Carlisle, Exeter, Folkestone, and Gravesend.

He was also consulted, about the year 1856, as to water and gas works at Copenhagen, and afterwards designed and carried out, as consulting engineer, the present extensive works there. The town of Aberdeen likewise owes to him the design and execution of the very comprehensive and complete works for supplying that town with water, taken from the river Dee, about twenty miles above the city. Of several of his works Mr. Simpson contributed accounts to the Institution, and some of them are published in the Transactions and the Minutes of Proceedings.

Although Mr. Simpson's engineering talents were principally directed to hydraulic works, he was consulted on and was connected with many minor engineering works and enterprises, and took part in all the parliamentary campaigns of the last twenty-five or thirty years, as adviser, promoter, or opponent of companies and other bodies.

He was thus intimately associated with all the leading members, not only of the present, but of the past generation of engineers; being in early life the friend and associate of Telford, Rennie, Mylne, the Bramahs - father and sons, Maudslay, Donkin, Field, Walker, Manby, of the older names, and with the leading engineers and scientific men of his own time, with all of whom he was more or less intimate, and in the habit of acting in his profession, and with whom his name will be classed and remembered.

As an engineer, Mr. Simpson took a large and comprehensive grasp of his case rather than of the minor parts and details; and accordingly his views were large and extensive, and habitually embraced a consideration of the results of his projects. He was not brilliant as a witness, nor as a speaker, but his advocacy generally carried great weight with it, and his opinions were held in high esteem, not alone because of the soundness of his views, but of his known and admitted honesty and uprightness of character.

Being long the intimate adviser of many clients and interests, his policy, perhaps, led him to act more as an arbitrator than an advocate; while the suavity of his manner and the kindly geniality of his nature were influential in softening down professional asperities or in arranging disputes between rival parties, many of whom will remember these estimable qualities in looking back upon his long and useful career, extending over nearly half a century.

Mr. Simpson was elected a Member of the Institution of Civil Engineers in 1825, the same year in which Mr. Telford accepted the office of President. He was a Member of the Council from 1826 to 1844, a Vice-President from 1844 to 1853, and the President in 1854 and 1855. He at a very early period took an interest in the Institution, and during the whole of his long career was one of its warmest supporters; he was assiduous in his attendance at the Council, and at the ordinary meetings; he selected the best officers to be found, devoted his time and his funds to its advancement, and there are few members who have been such solid benefactors to the Society as he was.

His decease occurred on the 4th of March, 1869, at his residence, Westfield Lodge, Kingston-on-Thames, and his remains were interred in the Brompton Cemetery, the funeral being attended by a large gathering of the Council and Officers of the Institution, of his professional colleagues and other friends, besides the employees of the companies and of other undertakings with which he was connected.