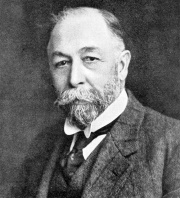 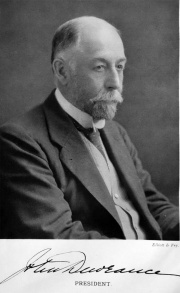 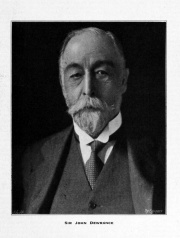 He was educated at Charterhouse School and King's College, London, where he paid special attention to chemistry, and was a pupil of his stepfather, Colonel John Davis.

At 21 he took control of the engineering business of Dewrance and Co which had been left him by his father.

In 1882 Dewrance married Isabella Ann (d. 1922), second daughter of Francis Trevithick, of Penzance, and granddaughter of Richard Trevithick. They had a son and a daughter.

In 1880 he started a research laboratory, taking over Professor Frederick Barff's assistants and apparatus and working up his process for protecting iron from rust by treatment with superheated steam.

Dewrance was a prolific inventor who took out more than a hundred patents, mainly relating to steam fittings and boiler mountings.

1923 He was President of the Institution of Mechanical Engineers

He died at his home, Wretham Hall, Wayland, Thetford, Norfolk, on 7 October 1937.

Sir JOHN DEWRANCE, G.B.E., was one of the most eminent of the surviving Past-Presidents of the Institution. He was elected a Member in 1899 and served on the Council from 1912 to 1921, when he was made a Vice-President. In 1923 he was elected President, and he subsequently continued to serve on the Council until 1930. Among his contributions to the Institution were a paper on the standardization of pipe flanges, delivered in 1915; his lecture to the Graduates' Section, London, 1921; and his Presidential Address two years later. But his most outstanding work for the Institution was in connection with research. He was chairman of the Alloys Research Committee for many years, and was also Chairman of the Research Advisory Committee. In addition he held the Chairmanship of the Cutting Tools Research Committee at the time of his death. He also rendered valuable services to the Institution as Chairman of the Finance and House Committee. In recognition of his eminent services to engineering he was elected an Honorary Life Member in 1931.

Sir John was born at Peckham in 1858. His father was associated with George Stephenson in earlier years, and was the erector of the Rocket and later became locomotive superintendent of the Liverpool and Manchester Railway. Sir John's father went into partnership with Joseph Woods (brother of the engineer of the Liverpool and Manchester Railway), who had founded an engineering business in London. After the death of Mr. Woods, the firm was continued under the name of Dewrance, which it still bears. Sir John was educated at Charterhouse and at King's College, London, of which he was made a Fellow in later life. In 1879 he took over the direction of his father's firm and a year later he assumed control of the research laboratory and staff of Professor Barff; this establishment subsequently became known as the Albion Chemical Works. In the early "eighties" Sir John devoted much time to research on lubrication, finally producing a bearing which ran under a load of 2,000 lb. per sq. in. in one direction and under a high vacuum in the opposite direction. He spent much time in metallurgical research and on problems of corrosion, and was a pioneer in the electrolytic production of aluminium ingots. In 1899 he was elected chairman of Messrs. Babcock and Wilcox, Ltd., and held this position until July 1937, when he retired; he retained, however, a seat on the board. He took out over 100 patents, mainly relating to improvements in boiler mountings and steam fittings, and largely in connection either with his own firm or with Messrs. Babcock and Wilcox. He was actively interested in the development of the Kentish coalfields, and from 1914 onwards he was chairman of several companies formed for their exploitation. In 1925 he was High Sheriff of Kent. During the War he was engaged on Government contracts, and he served on various committees of the Ministry of Munitions, and the Ministry of Labour, also on a Treasury Committee. In 1920 he was awarded the K.B.E., and eight years later the G.B.E. As a recognized leader of industry, Sir John served on multitudinous committees and federations, among which was the Engineering and Allied Employers' National Federation, of which he was president from 1920 to 1926.

In the latter year he was elected president of the Institute of Metals. He was also an Honorary Member of the Institution of Royal Engineers. His strong support of scientific research, in particular in its industrial applications, and his efforts in connection with many important researches, were recognized by his appointment to the General Board of the National Physical Laboratory, and to the Engineering Research Board. He was for ten years a Governor of the London School of Economics, and in 1923 was made Master of the Armourers' and Braziers' Company. The problems of standardization and the work of the British Standards Institution interested him deeply in the later years of his life, and in his Presidential Address before The Institution of Mechanical Engineers he expressed the view that, had the British Standards Institution been in existence, it might have prevented the "battle of the gauges" between the railways concerned.

Sir John's death occurred at his home, Wretham Hall, near Thetford, on 7th October 1937, in his eightieth year.

SIR JOHN DEWRANCE, G.B.E. (Past-President). It is with deep regret that we record the death of Sir John Dewrance, G.B.E., Past-President of the Institute, which took place at his home, Wretham Hall, Thetford, Norfolk, on October 7, 1937, after a short illness. By his death the engineering profession has lost one of its most distinguished engineers, and the country a great English gentleman.

To know Sir John intimately was to be impressed by his remarkably fine character—upright, just and human, of great personal charm, of true culture, learned in the sense known to the academic world, but distinguished moreover by the practical application which he made of that learning in an every-day life of far reaching usefulness to his fellow men. He was possessed of an un- swerving devotion to the cause of right, with a rare ability to infect others with the appeal of such a cause. His conversation was a privilege to listen to, for he had the ability of leavening his remarks with a fund of entertaining stories and a host of personal experiences. The success of his father placed him in a position that, had he so desired, he could have lived a life free from the cares of an active engineer, but such was not his nature.

Educated at Charterhouse and King's College, London, and later becoming the engineering pupil of the late Colonel Davis, Sir John, as a young man, attained eminence in his profession. He won the Watt Gold Medal and a Telford premium of the Institution of Civil Engineers. That he took out over 100 patents is more than sufficient testimony to the alertness of his mind. At an early age, he assumed direction of the family business, Dewrance and Company, in partnership with his step-father, Colonel Davis.

In 1880, as a separate venture, he took over the Research Laboratory and Staff of Professor Barff, eventually developing it into the Albion Chemical Company. In this Laboratory he carried out extensive investigations of the problems of lubrication, the corrosion of boilers, the composition of bearing metals, and also the production of aluminium, an ingot of which he succeeded in producing by electrolysis as early as 1882.

On April 5, 1899, he was elected a Director and Chairman of the Board of Directors of Babcock and Wilcox, Ltd., in the place of Mr. Andrew Stewart, a position which he continued to hold until the present year, and the success of that Company is due in no small measure to his guiding hand.

As a prominent resident of Kent, in which county he lived until 1926, he took an active interest in the exploitation of the Kentish coal fields, and in 1914 succeeded the late Mr. Arthur Burr in the Chairmanship of the Deal and Walmer Coalfield, Ltd., Kent Coal Concessions, Ltd., and a number of Associated Companies in which he was intimately concerned with the financial reorganization then instituted. He gave freely of his time to the organizations of his profession.

In 1923 he was Master of the Worshipful Company of Armourers and Braziers, an Honorary Member of the Institute of Royal Engineers and an Associate Member of the Royal Engineers' Board. As a Member of the General Board of the National Physical Laboratory, and of the Engineering Research Board, he gave valuable assistance to the development of organized research, of which he was an active advocate, and which he was wont to declare must supersede the private small- scale efforts of individual firms. He was also a Director of the Iron and Steel Trades' Employers' Insurance Association, Ltd., and his standing in academic circles was testified by the fellowship of King's College and membership of the Commercial Degrees Committee of the University of London.

Sir John was the third of five children and the only son of John Dewrance, erector of George Stephenson's "Rocket," and subsequently Locomotive Superintendent of the Liverpool and Manchester Railway. Edward Woods, Engineer of the Line, had a brother Joseph, who established a small engineering business in London in 1835. With him John Dewrance, Senior, became associated in partnership and thus began Dewrance and Co., as it was named after Woods' death in 1842. In a sense it may be said that with his death the Institution of Mechanical Engineers suffers the severance of one of its closest links with the earliest days of its existence, for his father, as already stated, was associated with George Stephenson, the first President of that Institution.

At the age of 24 Sir John married Isabella Trevithick, the grand-daughter of the famous Richard Trevithick, and they had two children, a son and a daughter.

In 1926 Sir John went to reside at Wretham Hall, Thetford, Norfolk, one of the best shooting estates in the Eastern counties, and country pursuits and the management of his Estate provided him, during his later years, with his principal activity and enjoyment. He was a fine shot, with both gun and rifle, a deer stalker of repute, and a first-class fisherman. He was also intensely interested in all forms of wild life in the country, and he was a keen supporter of local sports in his district. He was President of the Thetford Ex-Service Men's Club, Vice-President of the local branch of the British Legion, Vice-President of the Thetford Chamber of Trade, and of the Thetford Y.M.C.A. His daughter, Mrs. Rich, who lived with her father, is well known as a breeder of both agricultural and race horses, and a keen supporter of the turf, and both these activities of hers were of constant interest to Sir John. Thus we record the passing of a truly great English gentleman, transparently honest and open, kindly and unassuming, whose life in every sense forms a pattern and encouragement for those who follow. Essentially one such as Pasteur had in mind when he recalled to the students of Edinburgh University: "To remember the past and look to the future, associate the cult of great men and great things with every thought." J. H. M. G.