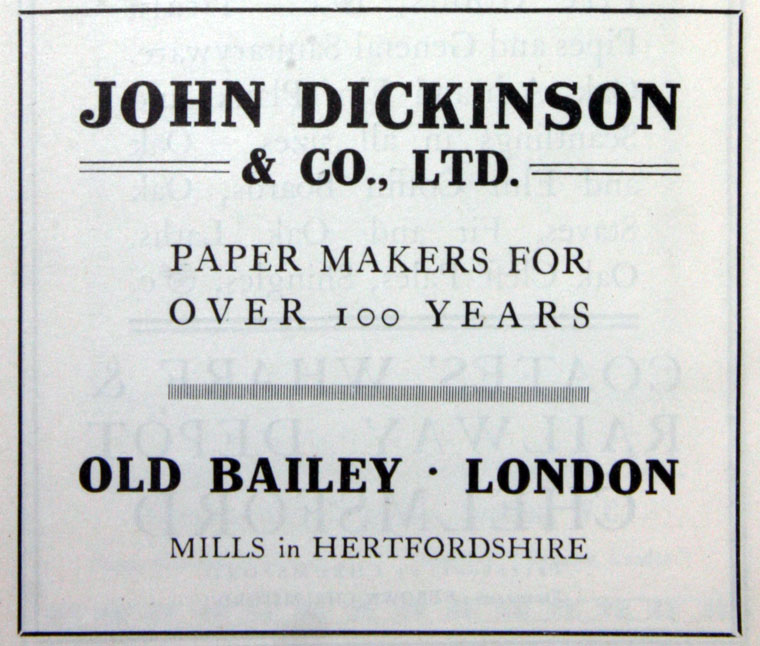 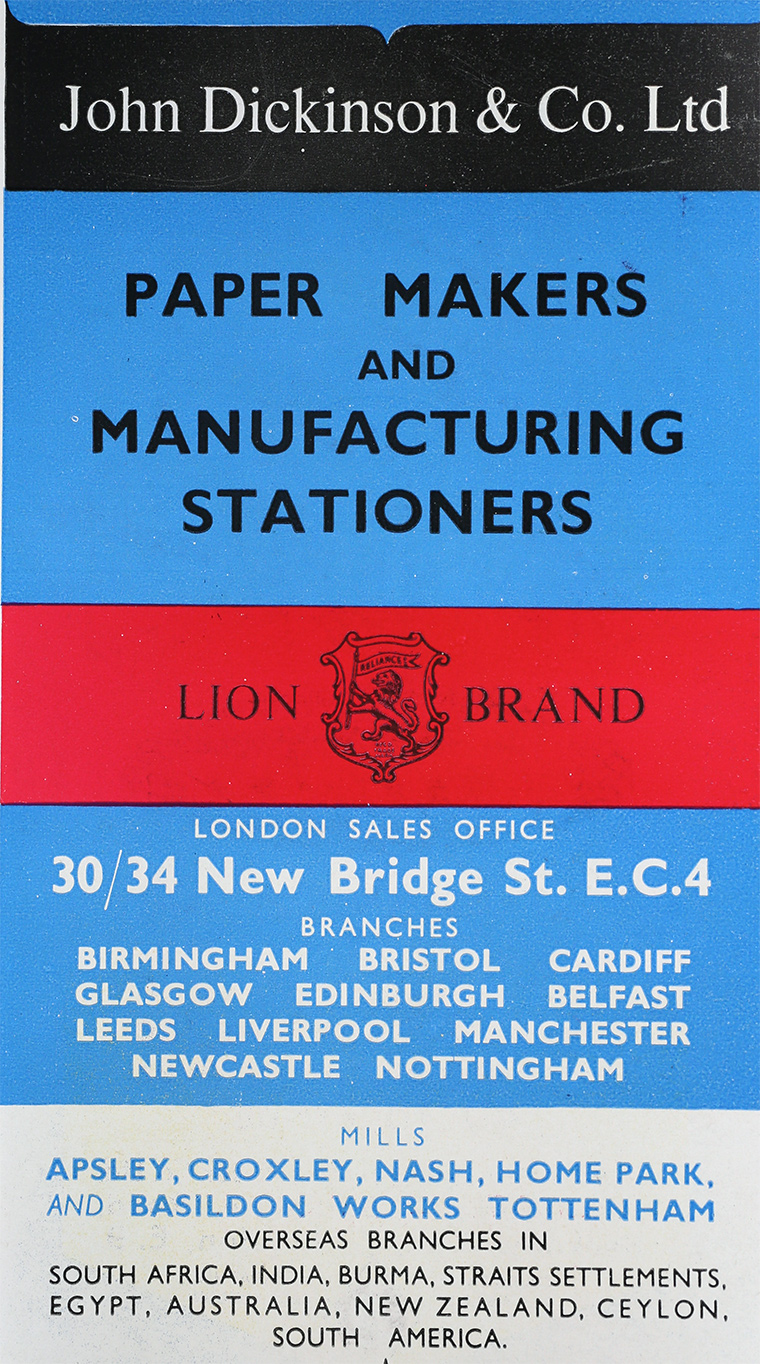 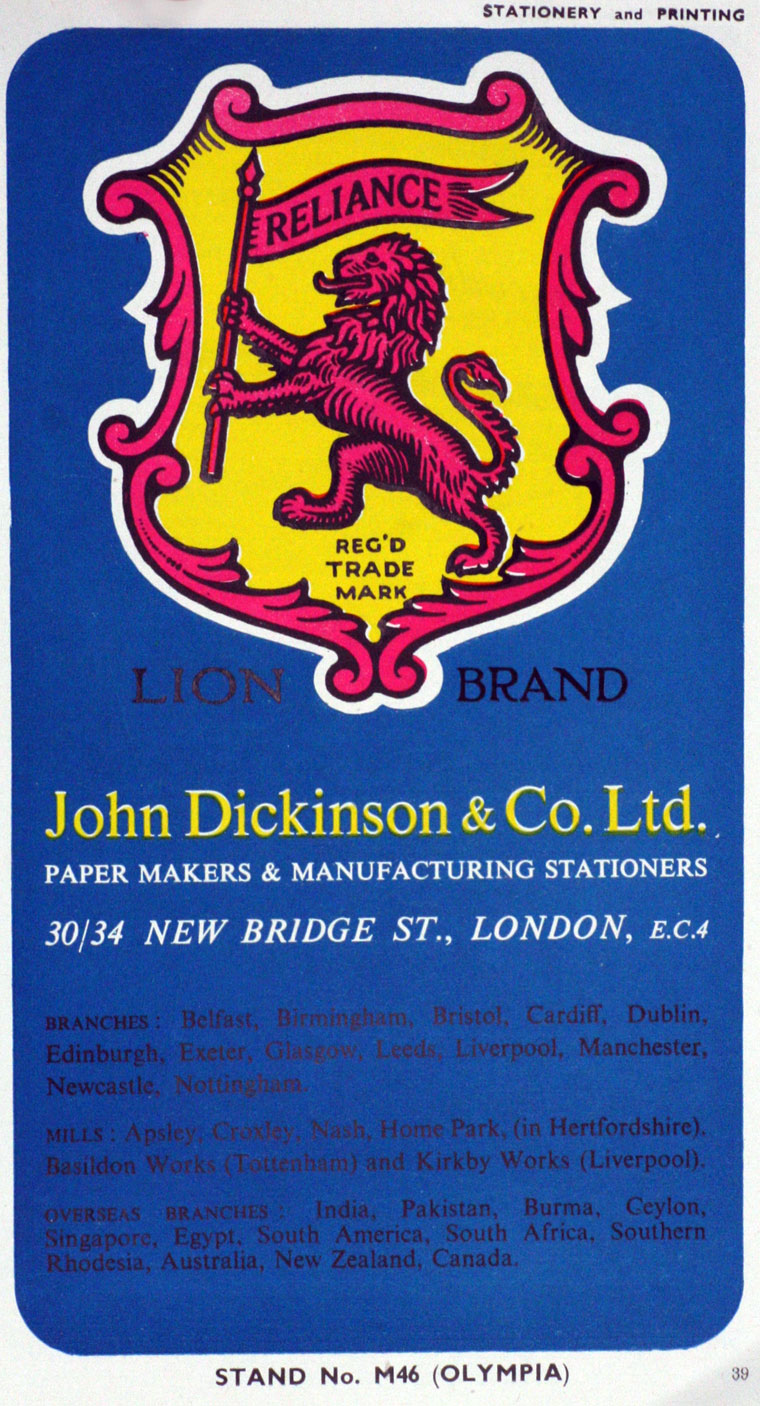 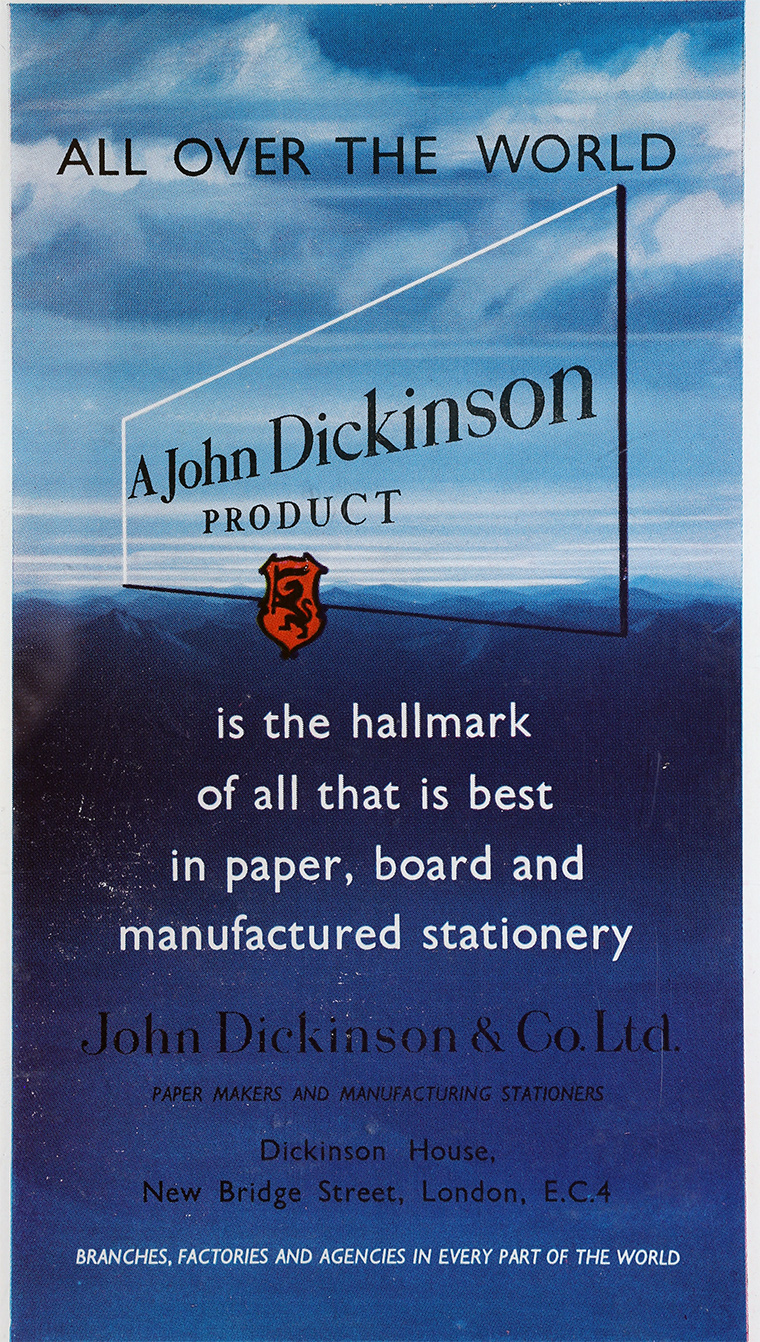 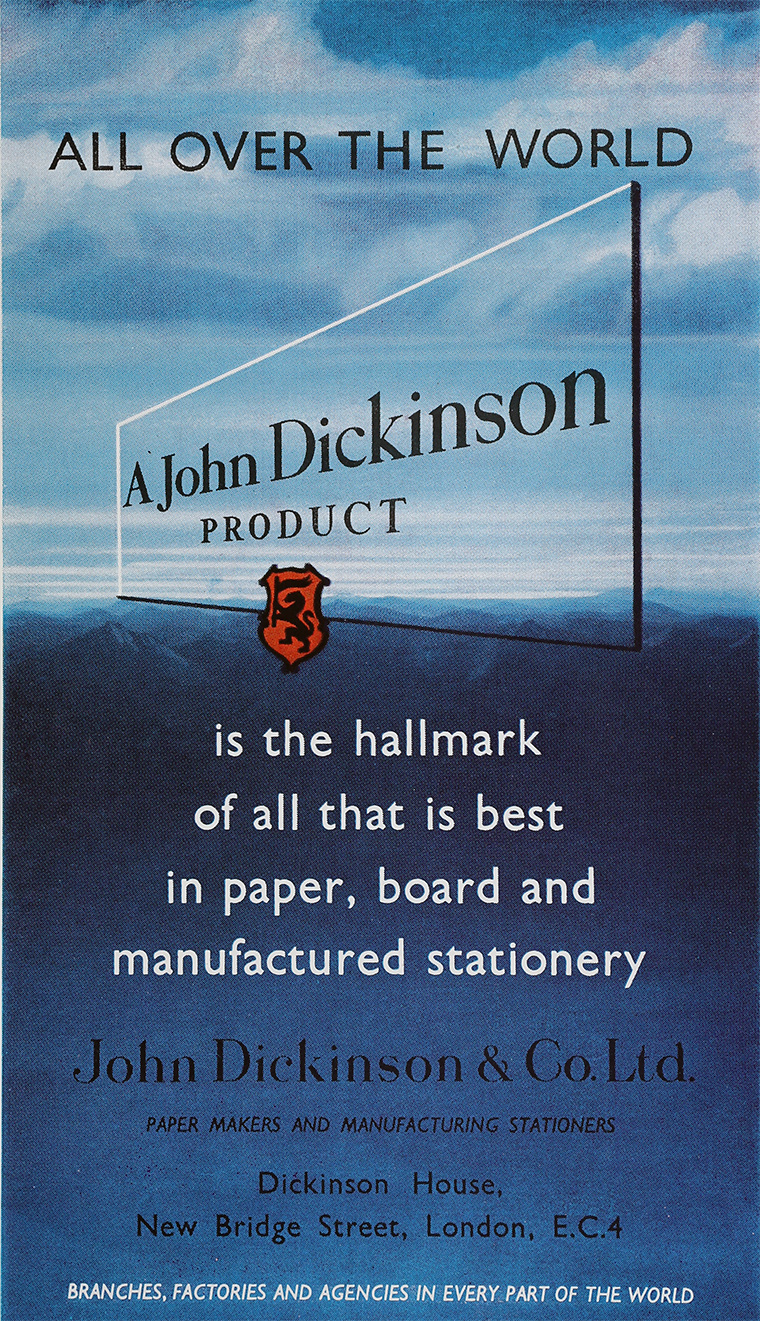 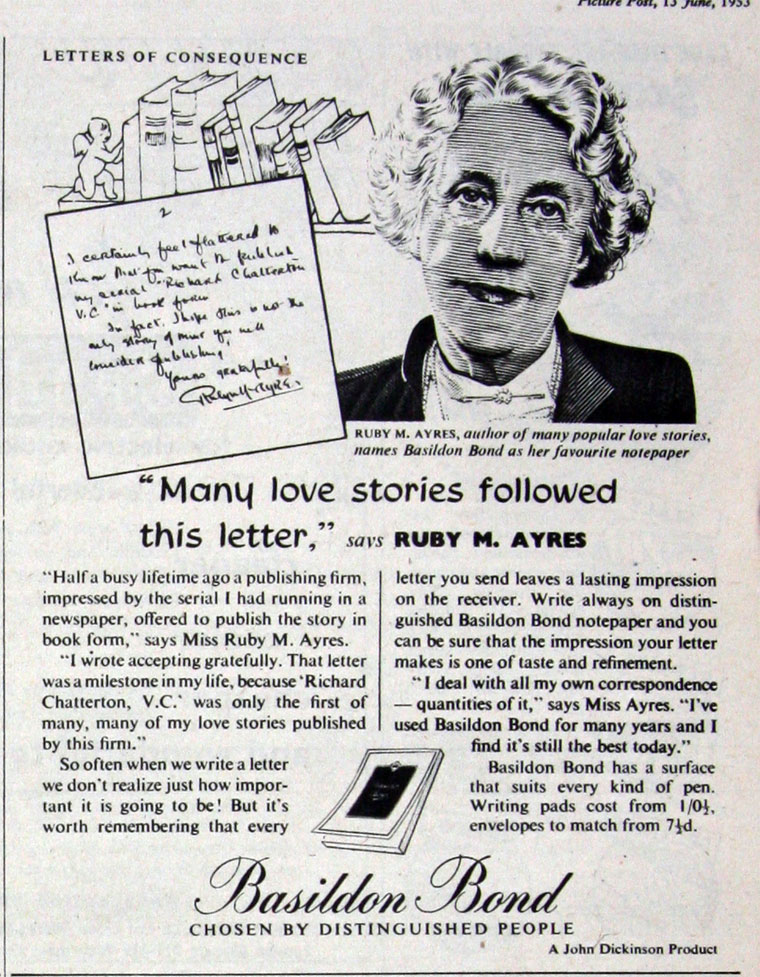 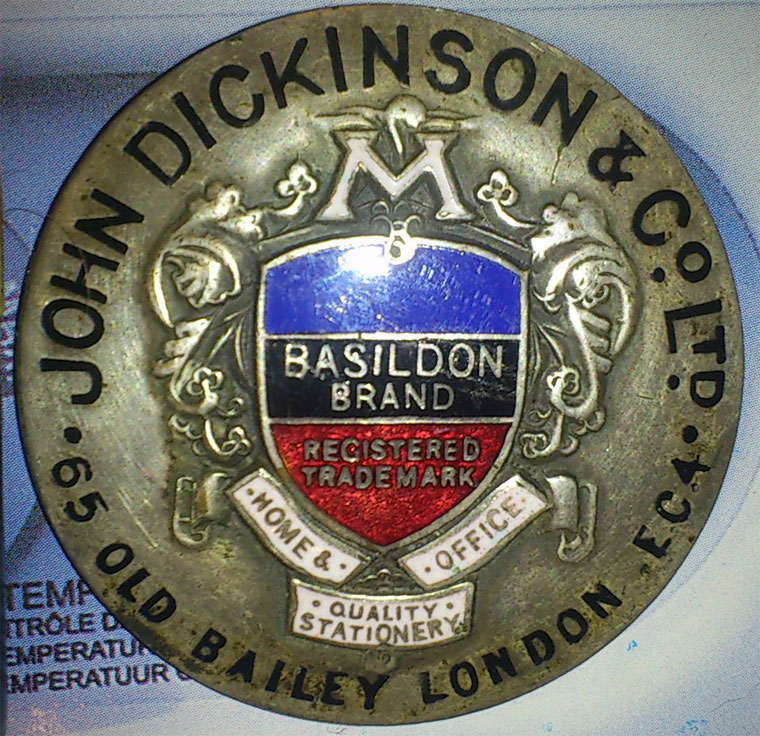 John Dickinson (1782-1869). Inventor, engineer, architect, builder, manager and financier, John Dickinson spent more than 60 years in the trade, and laid the foundations for a company that has reflected his ingenuity and hunger for expansion ever since.

1797 John Dickinson was almost 15 when he was apprenticed to stationers Thomas Harrison of Leadenhall Street, London.

1803 At the age of 21, John Dickinson was already experimenting with improvements over the prevailing paper making process, the Fourdrinier patent.

1804 John Dickinson set up as a stationer in the City of London at Walbrook.

1809 He developed a patent process for machine-made paper utilising an ‘endless web’ which was an ingenious perforated cylinder of metal with a finely woven wire covering. This revolved in a vat filled with pulp and produced a continuous sheet of paper of superior surface and appearance. From this time right up to 1855 he took out dozens of patents, and many of the pioneering discoveries of papermaking were his.

By 1876 his company was producing 3 million envelopes per week.

1886 The company was registered on 31 March, to acquire the business of paper-makers, of London and elsewhere, of a firm of the same name. [1]

1917-1930 Companies established in South Africa, Australia, and New Zealand, and ultimately a network of manufacturing sites and sales offices in 13 countries around the world.

1932 Basildon Bond becomes the bestselling notepaper in the UK.

1946 Factory in Kirkby, Liverpool, set up for pocket envelope production.

1953 Advert on this page for Basildon Bond.

1960 Advert on this page for Queen's Velvet.

1966 Formation of the Dickinson Robinson Group Ltd (DRG) by merging with E. S. and A. Robinson, forming one of the largest Stationery and Packaging companies in the world.

1999 The company left Apsley Mills and relocated to Cambridgeshire.

1990 DRG Stationery was sold to Biber Holdings of Switzerland. Its name was changed to John Dickinson Stationery Limited.

2004 John Dickinson Stationery celebrated its bicentenary as the largest UK producer of envelopes, books and pads.

2005 John Dickinson Stationery was purchased by Hamelin, a major stationery manufacturer based in Caen, France.