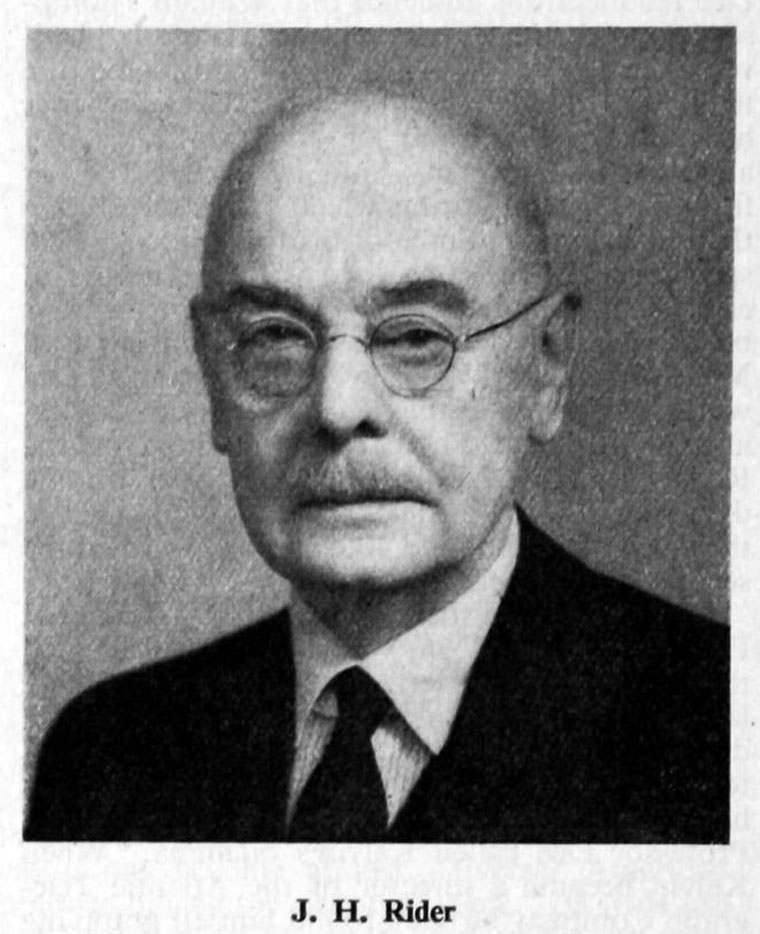 We regret to record the death of Mr. John Hall Rider, at "Sleepy Hollow," Woldingham, on Thursday, April 23rd.

Mr. Hall, who was in his ninetieth year, began his career in the early days of electricity generation and distribution and electric traction in Great Britain: he lived to see the country's electricity generation and transmission system grow into the largest integrated system of its kind in the world and he also saw the rise and decline of electric tramways. For the greater part of his working life he was a partner in the firm of Preece, Cardew and Rider.

John Hall Rider was born in Bristol on January 30, 1864, and in 1880 he began to study electricity and magnetism under Dr. Cook at the Bristol Trade and Mining Schools.

In 1883 he was apprenticed to Messrs. Paterson and Cooper, and while he was with the firm he carried out a number of lighting contracts in England and Norway.

Four years later he joined Blakey, Emmott and Co., Ltd., of Halifax, as the firm's electrical engineer, and became responsible for the design and manufacture of its dynamos and lighting plant.

In 1893 he was appointed borough electrical engineer to the Corporation of Bolton and he was responsible for the borough's electric lighting undertaking.

After three years he left Bolton to become borough electrical engineer to the Corporation of Plymouth, where he designed combined works for electric lighting and traction and superintended their construction.

Further experience in traction came his way when, early in 1901, he was appointed electrical tramways engineer to the London County Council. In that capacity he was concerned with electrification of the L.C.C. horse-drawn tramways, mainly on the underground conduit system. Before his death the whole of this tramway system had given place to omnibuses.

The Kingsway tram subway, now closed, was the direct outcome of a visit to North America in 1901 to study and report on shallow underground tramways. Another of his responsibilities was the L.C.C. generating station at Greenwich, which, together with a number of substations, was built to his designs.

Ten years' service with the L.C.C. ended in 1910, when he was appointed chief electrical and mechanical engineer to the Central Mining and Investment Corporation, Ltd. and the work he carried out for that organisation was the subject of a paper before the Institution of Electrical Engineers in 1915.

In that year there began an association which lasted for the rest of his life: on returning to England from South Africa he became a partner in the firm Preece, Cardew and Snell, and the title of the firm was accordingly changed to Preece, Cardew, Snell and Rider. His first major work with the firm concerned the new Harbour power station at Belfast. Most of the work had been done by the late Sir John Snell, but when he was appointed Chief Electricity Commissioner and resigned his partnership in the firm Mr. Rider took over the completion of the work. Later he designed the new power stations at Nottingham, Norwich and Swansea. At the same time he was occupied with a survey of electricity supply in London, on behalf of the London and Home Counties Joint Electricity Authority, as a result of which plans were drawn up for building a major power station in the western part of the area. Accordingly, in association with the late Mr. A. J. Fuller, he designed Fulham power station, which has a capacity of 310MW.

The last major installation with which he was concerned was the new Kingston power station, which was the first station to be opened after nationalisation of the electricity supply industry and now has a total installed capacity of 123MW.

Mr. Rider was a member of the three major engineering institutions. In 1909 he was elected to the Council of the Institution of Electrical Engineers and the next year he was elected a vice-president. He was also a past-president of the Incorporated Municipal Electrical Association, an association which was founded largely on his initiative in 1895.