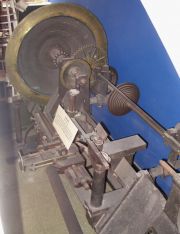 1. Johnson Jex's lathe/gearwheel cutting machine, as displayed at the Bridewell Museum, Norwich in 2011 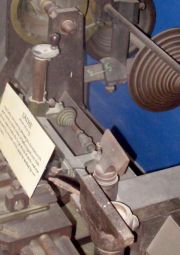 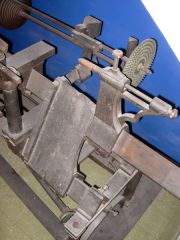 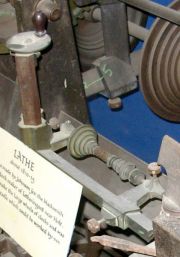 A number of sources state that this machine was constructed c.1820 by Johnson Jex, an ingenious self-taught blacksmith and mechanic, of Letheringsett near Holt, Norfolk. It was used for general turning and for cutting gear wheels.

The following advertisement was placed in 1822: “‘TRIPLE PRISMATIC ENGINE LATHE : JOHNSON JEX Informs the Proprietors of Mills and Manufactories that he turns Axles, Shafts, Spindles, Cylinders, working Barrels, Valves, Dutch Cones, Spherical and Plane Surfaces, Pyramids, Circles, Squares, Pentagons, etc., divides and cuts Pinions, Wheels and Patterns with any number of Teeth from 6 to 2000 and upwards and cuts screws of all kinds, from a Watch-screw to the largest Press Screw, left or right, single, double, or triple, square or angular thread, cylindrical or conical and to any required number of turns per foot or inch. The accuracy with which all these operations can be performed by the above Lathe is highly deserving of the attention of all persons who employ Mechanism in their various manufactures.
J.J. casts Mill Brasses by a new and superior process which can only be had at his Foundery at Letheringsett, near Holt.”[1]

An 1852 notice for the auction of Jex's effects included '.... a magnificent Dividing and Wheel Cutting Engine, and triple Prismatic Bar Lathe, self-acting for surfacing and screw cutting, with micrometer and repeating indices. The Dividing Engine is capable of producing any number up to 2000, multiplies or not, and is self-acting.'[2]

It is not clear from the 1852 advert whether the dividing engine and lathe were separate, but the 1822 advert implies that all the work was done on one machine.

1856 Advert: 'To Machinists. TO BE SOLD A BARGAIN, a superior LATHE, made by the late Johnson Jecks. To be seen at Messrs. G. and W. Stevens, Orford Hill, Norwich.'[3]

The quality of construction of the machine is extremely high.

After Jex died in 1852, the importance of his machine was recognised by influential people in Norfolk, and it was saved for posterity, and from 1942 it was displayed in the Bridewell Museum, Norwich. Unfortunately by 2012 it was no longer considered worthy of display at the Bridewell. Fortunately its importance was recognised by the Science Museum, and it was acquired by the museum and is currently in their reserve collection.

The Bridewell Museum partly justified its removal by claiming that the lathe was made 'by Henry Maudsley of London c1802'.[4] This was based on some speculation about the possibility of the lathe having been originally made by Henry Maudslay for use at Portsmouth Dockyard, and coming to Jex after passing through a number of hands.

However, no convincing evidence was forthcoming to support this speculation, and the postulated Maudslay connection was not given any credence by the Science Museum. Furthermore, while some of the design principles are consistent with Maudslay's lathes (but also with some other makers' prismatic lathes), the mechanical and minor 'architectural' and details are noticeably different to Maudslay's. Photo 12 shows a Henry Maudslay lathe formerly displayed in the Thinktank science museum in Bimingham, and it will be seen that there are considerable differences in the detailing. Minor details include the moulding of the fillets on the various castings, and the use of bolt heads with multiple holes for a 'tommy bar'. Maudslay did not favour tommy bar holes for his various clamps, using either loose 'vice handle' bars or 'eye bolt' types, as seen in photo 12. The Jex lathe also has various ornamental flourishes on turned features, whereas Maudslay eschewed such decoration. Much more significant is the design of various slideways used on the compound slide, etc. Maudslay used dovetails, while the Jex lathe has very unusual slideways. There are two types. One type is based on opposing vees, thus: < > (see photos 8 & 9). The other type, used for clamped location features, has combination of T-slots and 'inverted dovetails', having their flanks thus / \ rather than the more conventional \ /. This can be seen at the top RH corner of photo 9. The opposing vee ways appear to be limited to the compound slide, which might suggest that this was a later addition to the lathe.

Thus, while superficial aspects of the design - the tailstock, for example - do initially suggest a strong influence from Henry Maudslay, the significant detail differences mentioned above almost certainly rule out Maudslay as the maker.

Another source suggests that the lathe might well have been made by Bryan Donkin for Simon Wilkin, and acquired by Jex when Wilkin’s estate in Costessey (Cossey), near Norwich was sold in November 1816[5] following his bankruptcy. Among the items auctioned off was a metal working lathe that had been made for him by Bryan Donkin. [6].

Unfortunately, no illustrations of a Bryan Donkin lathe have been found to provide a comparison with the Jex lathe. However, it is recorded that Donkin made many lathes with triangular bar beds and cone pulleys drilled to use as a dividing plate.[7] We can refer to photographs of Donkin's rose engine used for engraving banknote printing plates[8]. We find that this does indeed feature a number of bolt heads with four holes for tightening with a tommy bar (although the heads are plainer than on the Jex lathe). There the resemblance seems to end. Its slideways have 'conventional' dovetails, rather than the types used on the Jex lathe. However, it seems that the rose engine was originally ordered from and partly built by Holtzapffel, but was finished by Donkin on account of the pressing need.[9]

Donkin did make the pantograph machine which was also needed for engraving the banknotes, but there is not much scope for comparison with the Jex lathe. All we can say is that the Donkin machine used 'conventional' dovetails.

We can consider what sort of lathe Wilkin might have owned. He was a wealthy gentlemen, and it seems most likely that he would have owned a 'gentleman's lathe', i.e. an ornamental turning (O.T.) lathe. Such machines were generally more compact than the Jex lathe, and highly finished. The Jex lathe is relatively large and well-made, but it does not have the degree of finish normally associated with O.T. lathes. Its dimensions seem more consistent with commercial use than with ornamental turning. That said, it does not seem ideally suited to the run-of-the-mill work for which Jex advertised in 1822, although it was evidently very versatile.

It is pointless speculating further in the absence of additional information.

Note: Simon Wilkin (1790-1862) had inherited a great deal of money. He was persuaded to go into partnership with Richard Mackenzie Bacon, who proved to be unscrupulous. Bacon persuaded Bryan Donkin to share in the development of a printing machine of Bacon's invention. The venture bankrupted Wilkin and Bacon in 1816 and nearly ruined Donkin.

Some of the machine's features are not understood. It is probable that parts are missing, and components might have been wrongly assembled.

Referring to photo 2, close examination of the polished brass face of the large pulley reveals hundreds of holes. All the holes in each individual ring would be spaced with great accuracy. A spring-loaded 'pin' fixed to the lathe would be engage with a selected hole to set the position at which a gear tooth was to be machined. If a particular ring had, say, 100 holes, they could be used to index the lathe spindle round to allow a gear wheel to be cut with 100 teeth, or 50 teeth, or any other factor of 100. Other rings of holes would cater for other numbers of teeth.

Most triangular bar bed machines had a single bar, while some had a pair. This is most unusual in having three bars. Referring to photo 4, the top bar is serving a typical role as a guide for the headstock, tailstock, and tool rest (for a hand-held tool). What is highly unusual is the presence of two headstocks, the larger one being supported by the pair of lower triangular bars. This large headstock would be used after removing the smaller headstock spindle and its bearing bracket. The remaining spindle could then be used either for turning large components, or for holding gear blanks while cutting the teeth, in conjunction with the indexing plate.

Photos 6 & 10 show a small spindle which carried a milling cutter of flycutter for cutting the teeth of gear wheels. It cannot have been used as mounted, as its axis should be at right angles to the main axis. It appears to be clamped to the toolholders on the compound slide, and it could have been clamped in the adjacent toolholders at 90 degrees. It is not known whether this is the correct arrangement, but it seems a poor arrangement, lacking rigidity.

Photos 8 & 9 show a compound slide mounted on one of the lower triangular bars. It could not have been used in this position, and would have been clamped to the upper triangular bar, replacing the hand tool rest. A curious feature is the immense anount of overhang at one end. This would have been very unsatisfactory, unless it was supported when properly set up. There is a movable bracket clamped to one of the lower prismatic bars, and it is possible that this could have been used to support the overhang of the compound slide.

Photo 11 shows the treadle-powered crankshaft, flywheel/drive pulley, etc. Note the roller arrangement on the crank to minimise friction. The placard claims that three men could work the treadle. This would make it a tight squeeze for the turner! In fact a long treadle board was needed because of the length of the lathe - the turner's feet need to be reasonably in line with his hands and head whichever part of the lathe he's working on.