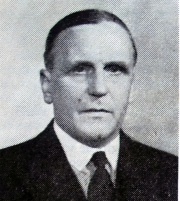 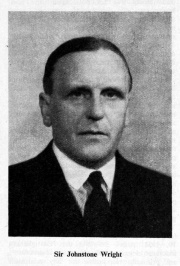 Sir Johnstone Wright (1883-1953), chairman of the Central Electricity Board

THE death of Sir Johnstone Wright at Guildford, on Sunday last, at the age of seventy, will have been noted with regret by his many friends in the electrical industry. Sir Johnstone Wright spent almost the whole of his working life in the service of electricity supply. He joined the industry when it consisted of a large number of individual and independent undertakings and he gained experience of both in the privately owned and municipally owned sections. He saw the first major evolutionary change in the industry, when the Central Electricity Board was set up to co-ordinate the generation and main transmission of electricity through the medium of the grid. Finally as chairman of the Central Electricity Board, he witnessed the complete transfer of the supply industry to public ownership and control.

Johnstone Wright was born in Perthshire on January 22, 1883, and he was educated at Perth Academy and at the Royal Technical College, Glasgow. After serving an apprenticeship with Messrs. Duncan Stewart and Co., he left Glasgow and worked for two years as contracts engineer with the British Electric Plant Company, Alloa.

He left Belfast in 1927, when he was appointed deputy chief engineer of the Central Electricity Board, and he remained with the Board, as chief engineer from 1933-44, as general manager from 1944-47, and as chairman from 1947 until 1948, when the Board was dissolved on "vesting date" - the date when the whole of the electricity supply industry passed to public ownership. Sir Johnstone therefore served on the Board throughout its existence and it is with the Board's achievements that his name is mainly associated.

It will be recalled that the purpose of the Board (which was set up under the Act of 1926) was to implement the Weir Committee,s recommendation that generation and main transmission of electricity should be divorced from the function of local distribution. Briefly, the Board, acting as a non-profit making body, was required to establish an interconnecting grid, to control generation without owning the stations, and to provide the authorised undertakers with a cheap and abundant supply of electricity for local distribution. Inasmuch as the Board was charged with the co-ordination of plant that it did not own, its task was a delicate one.

A record of the way in which the Board set about its task was given by Sir Johnstone Wright in his inaugural address as President of the Institution of Electrical Engineers in 1939. In this address he gave an account of the grid as an established entity, summarising some of the experience gained and progress made from an engineering and national standpoint since the passing of the 1926 Act. He wrote: "It is not too much to say that the grid has brought about a revolution in the outlook regarding the provision of new generating equipment. Indeed, the co-ordination of generating plant development may well prove ultimately to be the greatest of the contributions of the grid towards the advancement of the supply industry. Previously new generating facilities were provided piecemeal as required by the load increment of the individual undertakings and the size and type of set were more or less rigidly determined by local load prospects in the years immediately ahead."

The subsequent operating results of the grid have been given in the annual reports of the Central Electricity Board, which show the economies achieved by increasing the concentration of generating plant on the more suitable sites and by securing the closing down of the smaller and less efficient stations. For example, it is stated that the net annual saving to the supply industry by grid operation amounted, by 1937-38, to over 17 per cent of the costs of production which would otherwise have been incurred.

During the second World War the grid system (which was originally intended to operate under the control of areas) was normally run as a single national unit. National control was imposed primarily to achieve a still more effective pooling of generating plant, to enhance security by improving mutual assistance between areas and to save transport of coal by transferring electrical energy between areas up to the capacity of the transmission lines available. Some of the economies made possible by grid operation are reflected by the fact that, in 1925-26, the average price charged by the electricity supply industry to its consumers was 1.65d. per unit and that by 1946-47 the price had been reduced to 1.08d. per unit, although the price of fuel had increased, in the interim, by 250 per cent.

When the Central Electricity Board was dissolved on April 1, 1948, Sir Johnstone Wright, who was then chairman of the Board, retired. For his services during the war he had been knighted in 1943. From 1944 47 he was a member of the Fuel Research Board. He was also a member of the Institution of Civil Engineers.