Grace's Guide is the leading source of historical information on industry and manufacturing in Britain. This web publication contains 144,275 pages of information and 230,174 images on early companies, their products and the people who designed and built them. 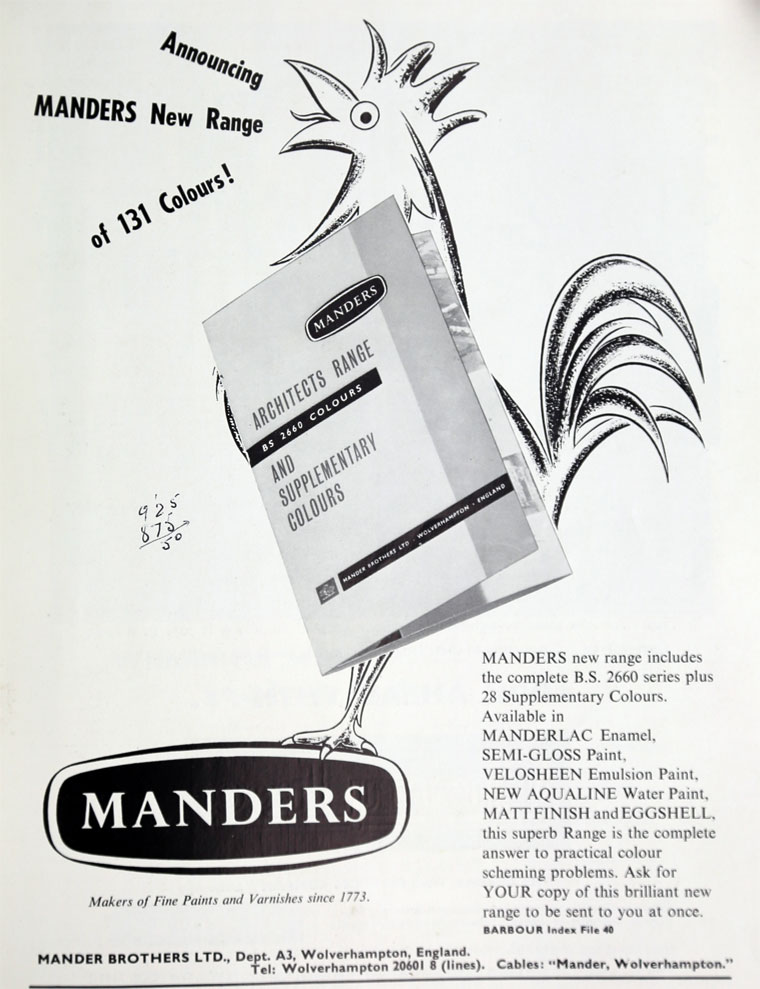 Mander Brothers of Wolverhampton, makers of paints, inks and varnishes.

c1742 Thomas Mander arrived in Wolverhampton and started in business as a baker and maltster. He married Elizabeth Clemson

After leaving school, Benjamin joined his father's business, as a baker and maltster.

John was apprenticed to a chemical company.

1790 John purchased four houses, two in Cock Street and two at the back of 48 St. John's Lane. He moved his business there to be close to Benjamin's activities.

1792 Benjamin started a new business on the same premises in John Street as his father, with his eldest son Charles. The new business was called Benjamin Mander & Son, Japanners, and was a great success. They would have produced all kinds of japanned goods and tinware, decorating such things as trays, firescreens, wine coolers, clocks and ornamental boxes.

Further properties were acquired in 1800 and 1803, and one of the houses was converted into an engine house, and a tall chimney was built. John also began to make varnish and colours for the growing japanning trade, and supplied these to Benjamin and Charles at cost price.

By 1803 Charles was also making varnish - his black 'japan' varnish sold very well. It was quite cheap and a good quality product. This seems to be the recognised start of the business which eventually became Mander Brothers[1]

By 1817, Mander's varnish and paint works employed about 30 people. Charles also travelled widely to promote and sell the varnish.

By 1820, they traded as Mander, Weaver and Co one of the largest chemical manufacturing works in the country, and also operated businesses in baking, japanning and tin-plate working, canals and gas manufacture.

c1824 A severe fire destroyed most of the buildings. Several people lost their lives and the heat was so intense that it melted the glass in the windows of adjacent houses.

1835 Charles took William Wiley, the chief manager and invoicing clerk, into partnership. However, the partnership did not live up to Charles' expectations and was dissolved in June 1836; Wiley left to start his own japanning business, taking some of Charles's employees with him in the process.

By the 1830s the varnish trade seemed to be overtaking the Japanware.

For Charles the varnish-making side of his business was far more profitable than japanning and tin plate and he correctly saw that the japanning industry was in decline. Tastes were changing and sales were slowly falling as people began to lose interest in japanned goods.

1840 Mander decided to concentrate on making varnish and sold the japanning firm to William Shoolbred, which became Loveridge and Schoolbred. Manders still continued to provide varnish to the Japanware trade.

Charles was now 60 years old and so had to think about securing the future of the business for his sons.

1845 The partnership of Mander Brothers was founded by the brothers Charles Benjamin and Samuel Small Mander. As the business expanded with the Industrial Revolution and the rise of railways all over the British Empire, branches and agencies were established in "all the civilised countries of the world".

c1850 Charles retired to Brighton, leaving the business in the hands of his sons. His retirement was only to last for three years. He died suddenly of apoplexy in Croydon, on 22nd December 1853.

The company prospered through the nineteenth century by manufacturing paint and printing ink and had branches in London, Paris, Florence, Vienna and Berlin.

1865 The colour works was set up; the colours and paints proved to be very popular. Offices were set up in London and overseas depots and agencies were opened in France, Italy, Canada and Australia.

The company also started to manufacture printing inks, at a time when newspaper and magazine sales were increasing. The inks proved to be as popular as Mander's other products.

1887 Theodore Mander bought land at Wightwick, 3 miles outside Wolverhampton, and commissioned the architect Edward Ould to build Wightwick Manor; in 1893 he was asked to extend it.

1894 the Wednesfield Works were opened in Well Lane, Wednesfield to make printing inks. The works were rebuilt in 1908.

1911 The family became distinguished for public service, art patronage and philanthropy. Charles Tertius Mander (1852-1929) was created the first baronet of The Mount in the baronetage of the United Kingdom in the Coronation honours of George V, on 8 July 1911.

1923 The business was constituted as a limited company, Mander Brothers Limited and Sir Charles Tertius Mander was appointed the first chairman, or "governing director".

Under the chairmanship of the Radical Liberal M.P., Sir Geoffrey Mander, Mander Brothers led many progressive initiatives in the field of labour relations and employment welfare between the Wars.

1931 Mander Brothers was the first British company to introduce the 40-hour week through an historic agreement signed and mediated by Ernest Bevin, general secretary of the Transport and General Workers' Union, in September 1931.

1927 Manders became paint and wallpaper merchants, when the company acquired some 50 depots through the purchase of W. S. Low's long established distribution chain.

1937 the printing ink interests merged with John Kidd and Co to become one of the largest printing ink manufacturers in the U.K. Formed Manders (Holdings) Limited gathering together all of the specialised companies.

1945 the Wednesfield Works were sold to Griffiths Paints.

The Company redeveloped their historic properties on a 4.5 acre site in the centre of Wolverhampton.

1968-74 the original works were closed. The company set up a property division to control the redevelopment of the site as the Mander Shopping Centre and Mander Square. Today the Mander Centre dominates the retail heart of the city.

1970s The Heath Town works had expanded to cover an area of over 20 acres and the company employed over 1,000 people.

1972 Philip Fitzgerald Mander, who had been Chairman of the public company, died, and the family took a less active role in the business.

1973 Acquired British Domolac Limited, an industrial paint company; Manders' Industrial Paints Division was added to it. The company then started to trade as Mander-Domolac Limited.

1990 A new decorating centre was opened at Heath Town; a new headquarters for Mander-Deval Wallcoverings was built on land adjacent to the works.

1993-4 The paints and coatings businesses were sold to the Total S.A. Group; then the property portfolio, including the Mander Centre, was sold to the Prudential Insurance Company.

1998 the printing inks division was sold to the Flint Ink Corporation, of Detroit in the United States of America, "so ending a long chapter in the British chemicals industry" (The Financial Times).