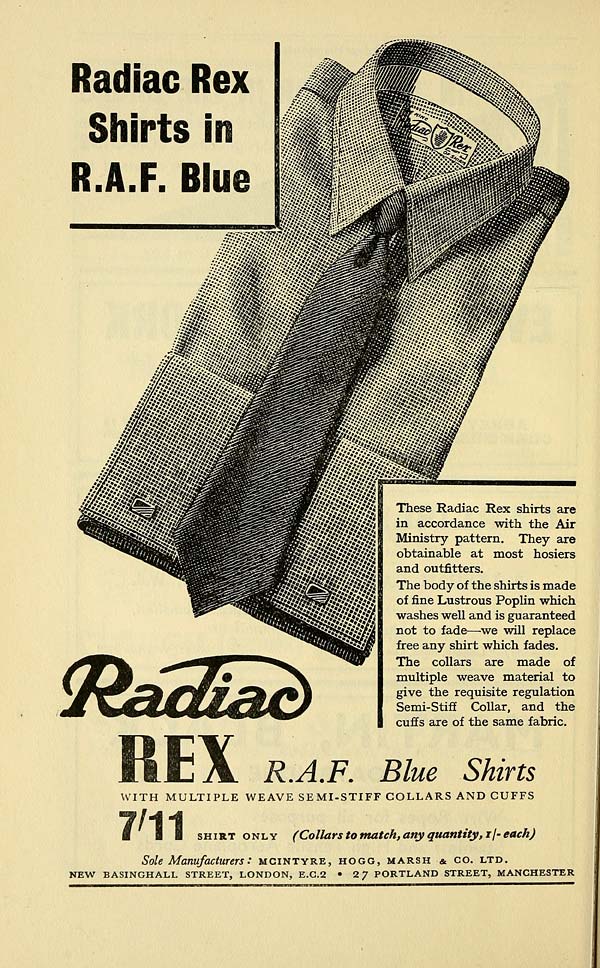 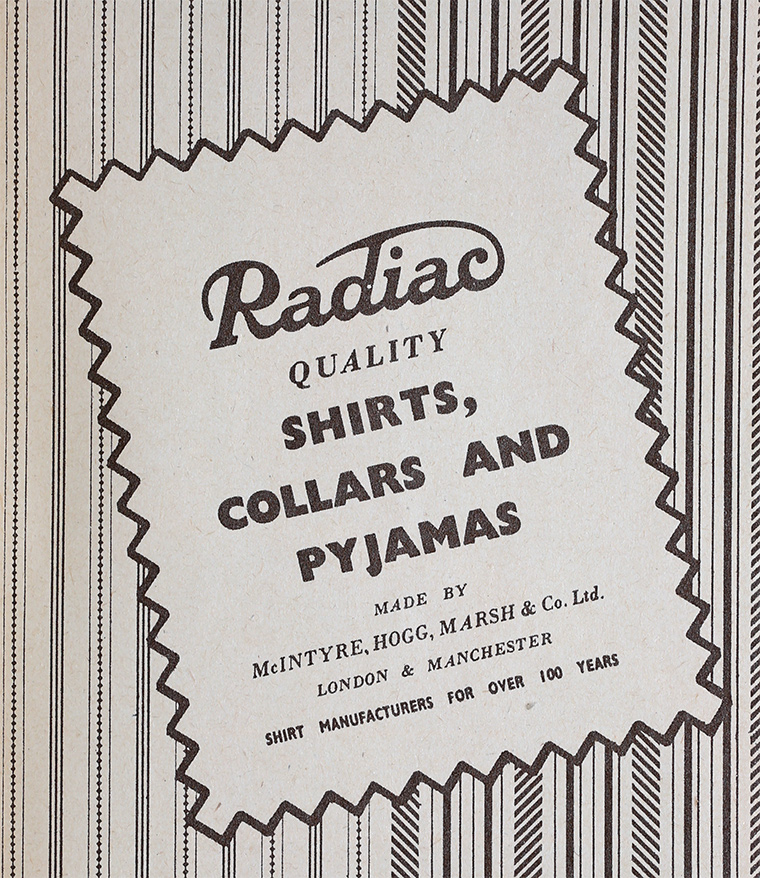 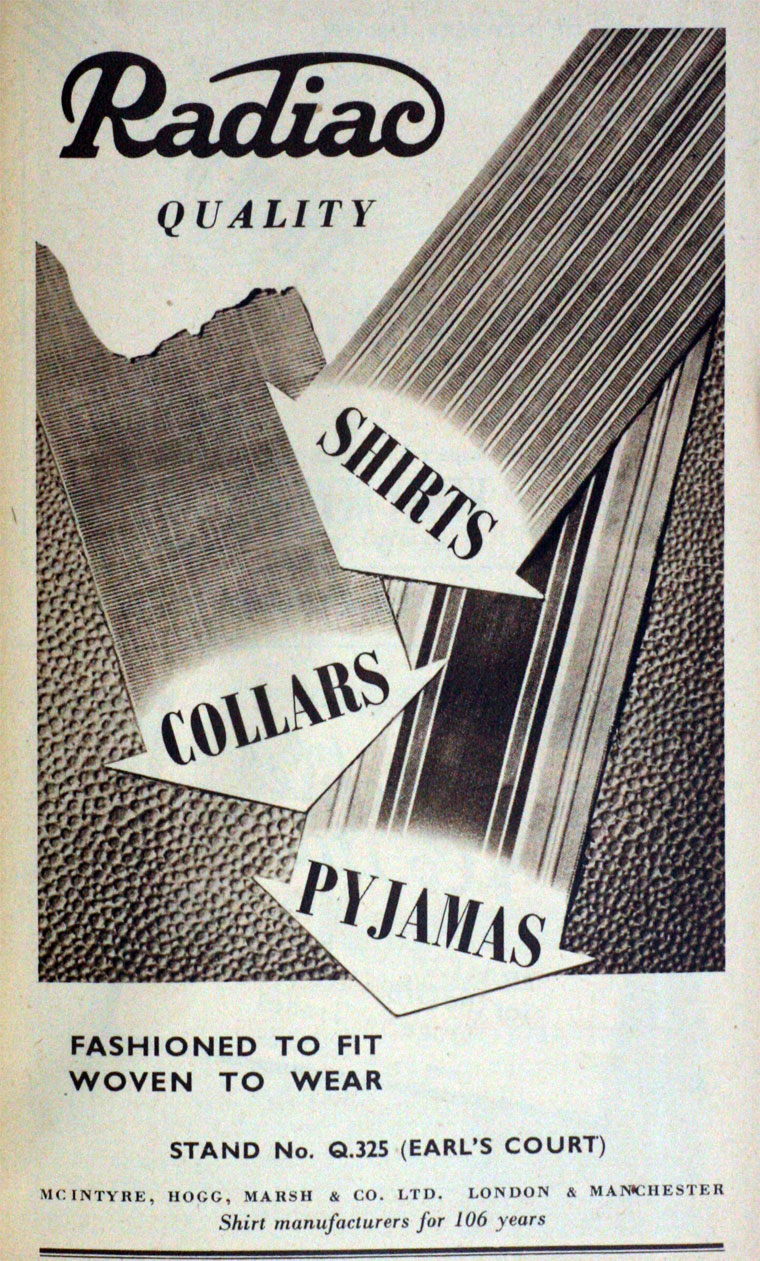 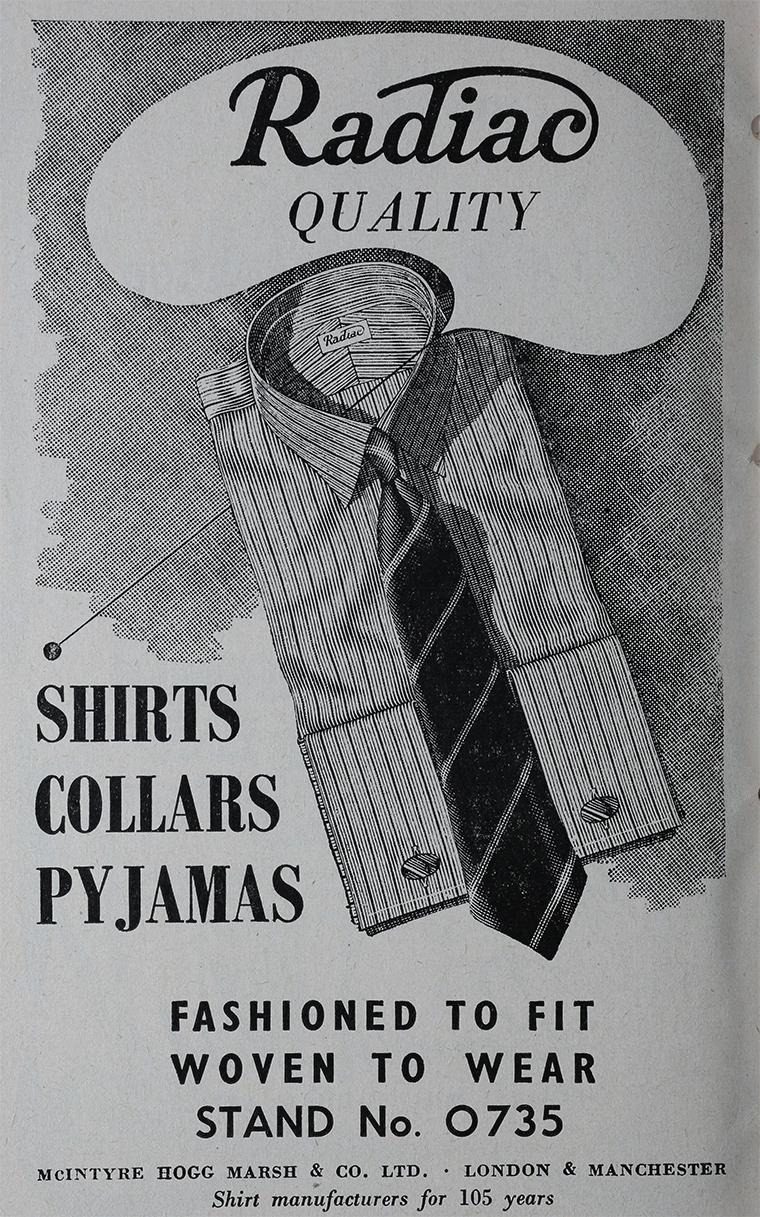 Mid-1800s. Shirtmaking became an important industry when three pioneers appeared - Peter McIntyre, William Tillie and Joseph Welch. Peter McIntyre was born in Paisley, Scotland in 1819, and in 1844 joined his brother-in-law, William Thompson, to found a shirt wholesaling business with connections in Glasgow and Londonderry, Northern Ireland.

1850 Peter McIntyre moved permanently to Londonderry and eventually broke with his existing partner.

1855 He entered into a lasting association with Adam Hogg; forming McIntyre and Hogg. Adam Hogg was also a Scot who went to Londonderry as a manager for the shirt manufacturers Tillie and Henderson and, for a short time, he was also with Welch, Margetson and Co, another shirt manufacturer. With two experienced men in control, expansion was swift, and it became necessary to hold stocks of shirts in London; with a warehouse opening at 9-10 Addle Street, EC2.

Although, in Londonderry, the cutting of the shirts and some sewing was done in a Factory, the greatest part of the work was done in countless homes and collected weekly from the out-stations.

1857 The centralised factory system came with the introduction of sewing machines, which McIntyre and Hogg took up that year. This enabled more people to be employed centrally and soon the original factory became too small to accommodate the growing firm.

1861 The partners embarked on an ambitious project for a new factory in Londonderry.

Late 1860s. Soon after McIntyre and Hogg was founded, the need was felt for a factory in London, so premises were taken at Copperfield Road, Mile End.

1872 A factory was opened in Bristol and transferred to Cheddar in 1873.

1870s The firm was employing 600 workers in the City Factory, Londonderry, and more than 2,000 workers in Derry and the surrounding area.

With settled conditions at home and abroad, the 1870s and 1880s were a boom period and the firm's home trade was reinforced by the extension of export markets (Australia, South Africa and the East and West Indies). To meet this growing demand, the Cheddar branch was enlarged - by this time it was known as the Taunton Manufacturing Co.

1882 A fine new warehouse was built in Basinghall Street, London (lasting until it was destroyed in the blitz during the Second World War).

1891 The name of the business was changed to McIntyre, Hogg, Marsh and Co.

1904 A new London factory was built at Upton Park, London E13 ,to replace Spa Factory in Copperfield Road. The early part of the 20th century was again one of consolidation and expansion, with mass production centred on the Londonderry, London and Taunton factories. In 1901, the factory space of "City Factory" had been doubled, taking the workforce up to over 800.

1907 The trade name Radiac was introduced.

1908 A limited company was formed as "McIntyre, Hogg, Marsh and Co Ltd".

WWI: During and after the War, controls were imposed on the industry; and the shirt trade, like many other businesses, went through a major recession. But progress was made steadily and the fashions demanded by the "bright young things" of the 1920s were met just as readily as those of their fathers and grandfathers. During this period, H. F. Powell (1876-c1974), Henry Powell's son, was controlling the Londonderry and Taunton factories, and it was he who nursed them through the Second World War years, ensuring that shirts for the forces were turned out in ever increasing quantities.

After being in the army during the Second World War, he returned to City Factory, Londonderry to become manager and then became Production Director.

1960 The firm was taken over by the English Sewing Cotton Co.[2]

1964 McIntyre, Hogg, Marsh and Co was merged with another of its subsidiaries, Tootal, and closed the Selsdon Road factory, but retained the better known Tootal name.