HFW liveried lorry. HFW subsidiary of Melias Transport. Reputedly the first one off the production line after end of hostilities in WW2.

Melias-owned E.R.F. eight-wheeler delivering paper at the Thames Board Mills. 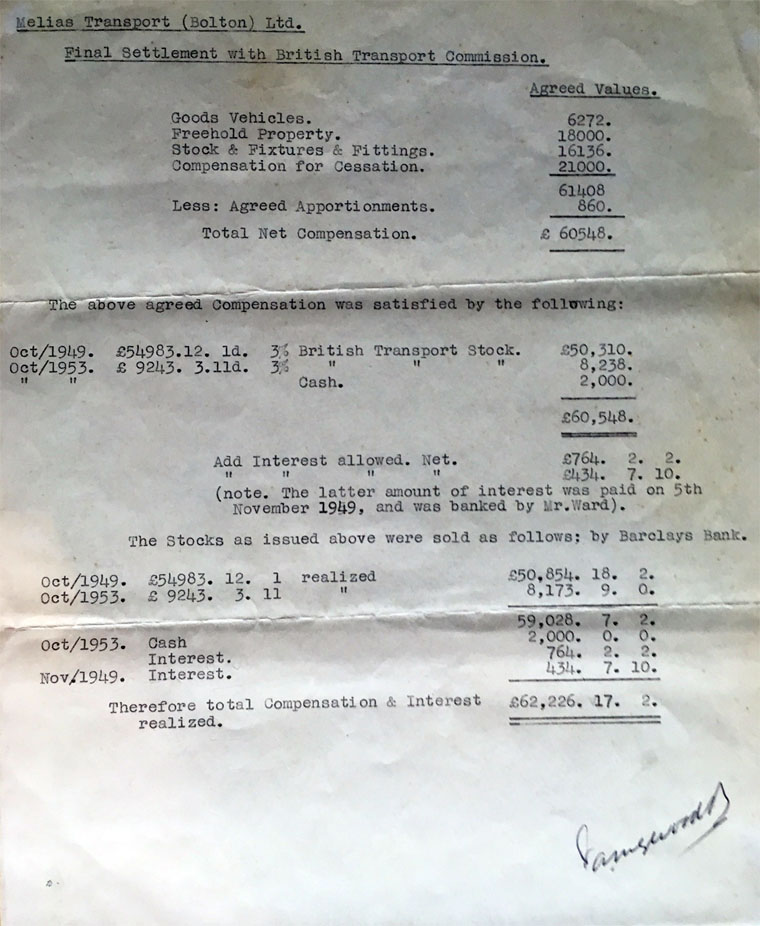 "In 1919, Mr. E. Melias, of Bolton, came back from the war crippled and unable to stand at the bench to do his old job. He was not, however, troubled by this situation, for he saw the true possibilities of road transport, especially in war time and, accordingly, he acquired an ex-army bullet-riddled Maudslay and then set to work. From that beginning has grown the business that is now Melias Transport (Bolton), Ltd with headquarters at Bolton and depots in Warrington and London.

Mr Melia was one of the pioneers of long-distance road transport in the Bolton district. He has developed a busy trunk service, of which the chief user is Thames Board Mills, Ltd., with loads of patent board and paper. Another important customer is Thos. Ryder and Son, Ltd., of Bolton.

From his modest start, Mr. Melia's activities quickly expanded and, in 1924, he became an early user of Saurer machines, a six-wheeler of which make is still included in the fleet. Otherwise, the vehicles are all of E.R.F. manufacture, these consisting of six eight-wheelers, a six-wheeler and two four-wheelers. Until permission was obtained recently to acquire another machine, £1,500 a month was being paid out to sub-contractors, and even now some hundreds of pounds must be expended each month for dealing with superabundance of work.

The main depot at Bolton is housed in a former cotton warehouse, which is well equipped with plant, but in view of the efficiency or the manufacturers' service Mr. Melia contends that it pays to take advantage of these facilities and to refer all work of a major character to the Gardner or E.R.F. factories. In case of trouble the service department is given carte blanche to do all that it deems necessary and apart from the speed with which the job is completed, the basis of the charges is such that proved costs compare most advantageously with those of maintaining, permanently, an adequate repair department, in addition to the present section.

This system results in the vehicles receiving thorough attention, for when a machine has gone 12 months without being sent to the works at any time it goes in for a general overhaul.

Some idea of the high level of mileage is given by one machine which has run 82.000 miles in the course of 13 months, operating on the London Bolton trunk service, with shunt drivers at each end. Normally the vehicles leave Lancashire at about seven o'clock in the evening and arrive in the Metropolis about 11 hours later, when the night men retire to bed and the shunt drivers take over to do deliveries and collections.

London is left again in the evening the following morning the day men come out by car from Bolton and meet the vehicles at various points near the end of the journey, there changing places with the night drivers. Originally, with the agreement of the men, arrangements were made for a particular stopping place to provide accommodation, but later it was decided to give the driven; a cash allowance and for them to choose their own rest-houses.

On only the rarest occasions is a vehicle standing in the garage. To save waste of time a car will proceed with a mechanic to anywhere near at hand where loading is likely to occupy a considerable time, and minor repairs will be completed while the vehicle is at the loading docks.

In the case of trouble on the road the drivers arc instructed to telephone direct to Mr. Melia at any time of the day or night and be then drives out to their aid or, if necessary, he will instruct the E.R.F. service depot or Messrs . W. J. Boyes and Son, of Peckham, to send assistance.

At Bolton a dozen spare wheels are kept in constant readiness to change over as required and the tyres' of these are tested for pressure each day. Incidentally, new vehicles are fitted with oversize tyres, the 40 by 8 type being found to give particularly good service. Dunlop covers are used throughout and reach mileages between 60,000 and 70,000. Each week the machines arc cleaned, greased from end to end, and before starting on any journey the fuel tanks arc filled up and oil levels and tyres checked, details then being entered against the particular machine on a chart.

During a year the fuel consumption will total 60,000 gallons and typical figures show that the eight wheelers will average 10.7 m.p.g. Lubricating oil stocks are of Valvolene."[1]

Thomas A. Melia was the former managing director of Melias Transport.

"We operated from Gilnow Lane during the war and carried endless amounts of combat damaged German aircraft, which had wings and propellers removed as the planes could not be moved in their assembled state. The wings and props were usually carried on another vehicle which accompanied the fuselage, and some were taken to aircraft research and design centres in various parts of the country."

"Melia's Transport carried a virtually undamaged Focke Wulfe 190 on CXJ 862, driven by a Londoner, Barney Fetherstone, who lived in the Deane area. The prop. and wings were carried, I think, on ABN 429, a six-wheel ERF, and the plane was assembled on the Town Hall Square by the RAF team. Melia's also carried damaged flying bombs (Buzz Bombs) some of them virtually undamaged, and they were used to teach pilots where to shoot t bring them down."

"Melia's Transport eventually became part of British Road Services when we were nationalised by Clem Atlee's Government in the 1949-50 era. We were in Kay Street by then."[3]