1858 pumping engine for the Léonie coal mine, France

Detail of operating mechanism at Birkenhead 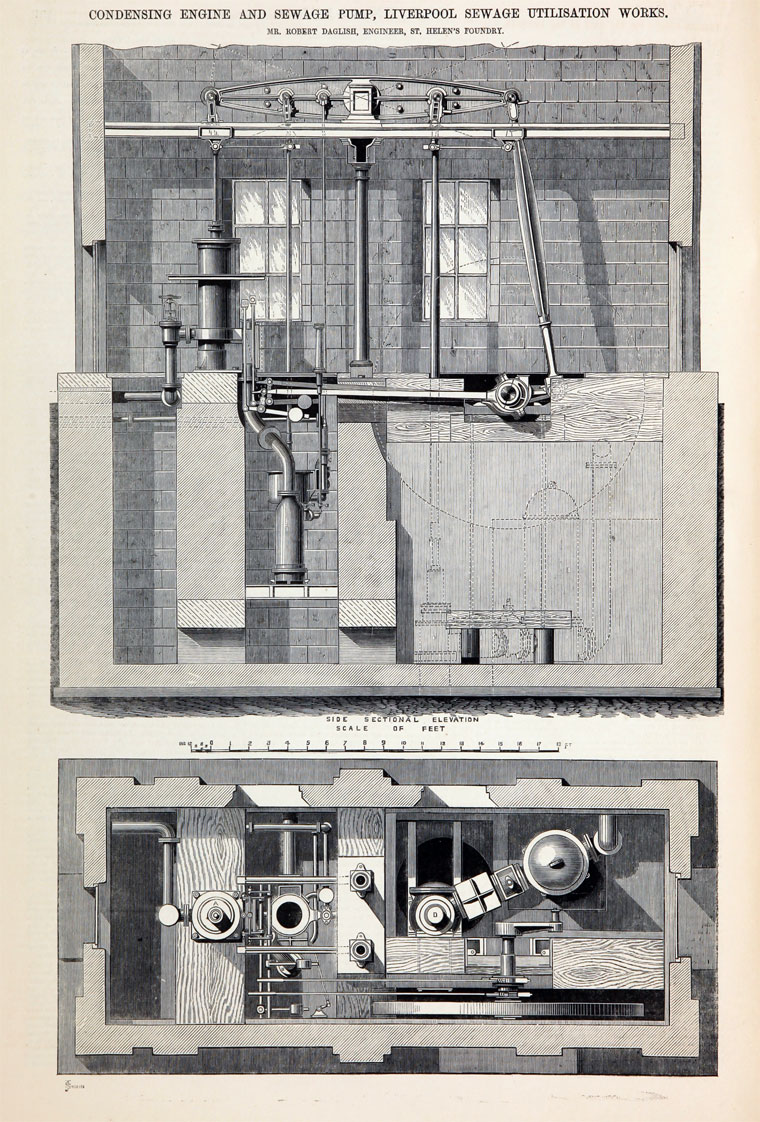 1872. Revolving Furnace for The Manufacture of Black Ash. 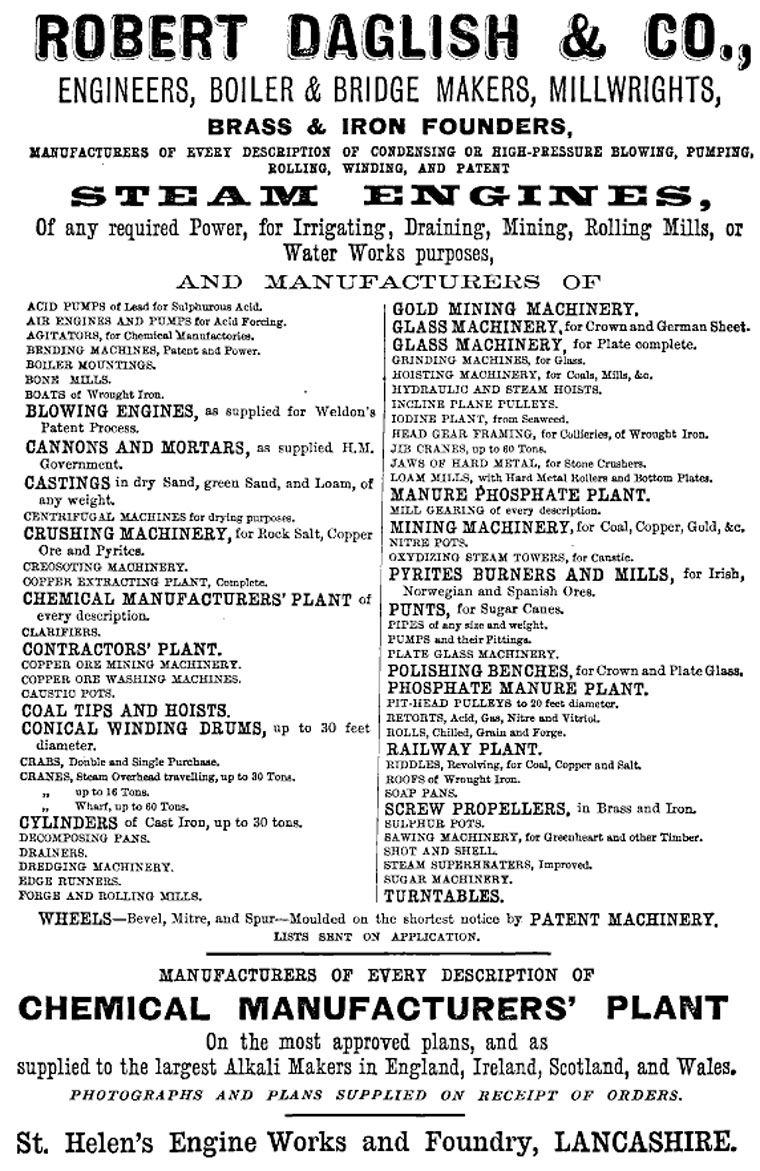 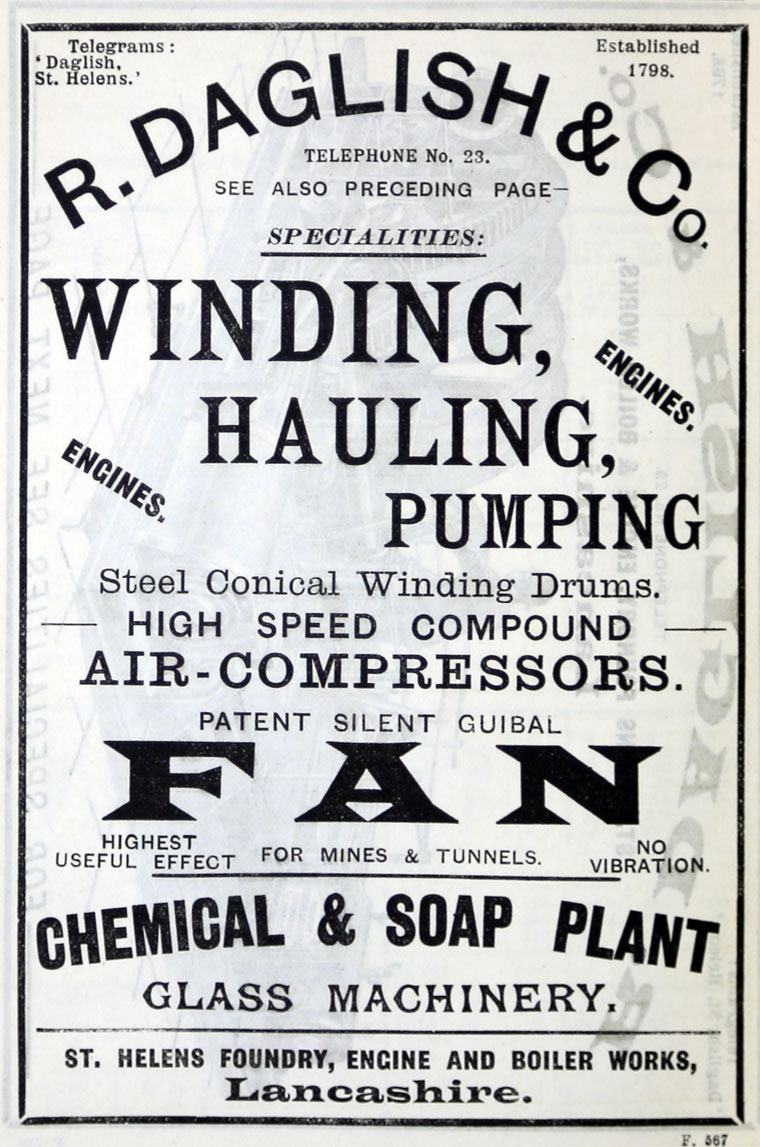 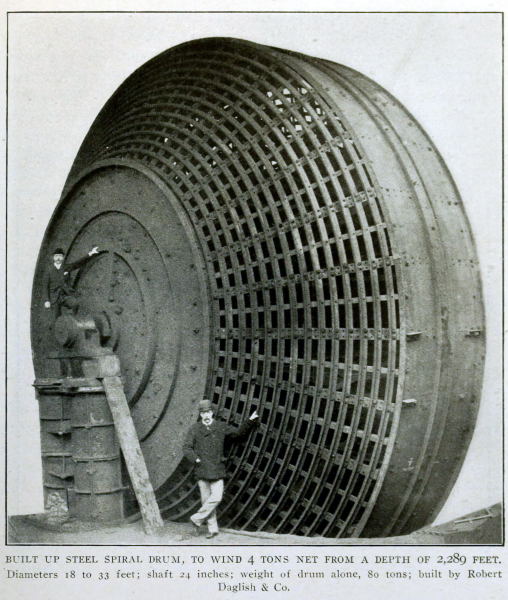 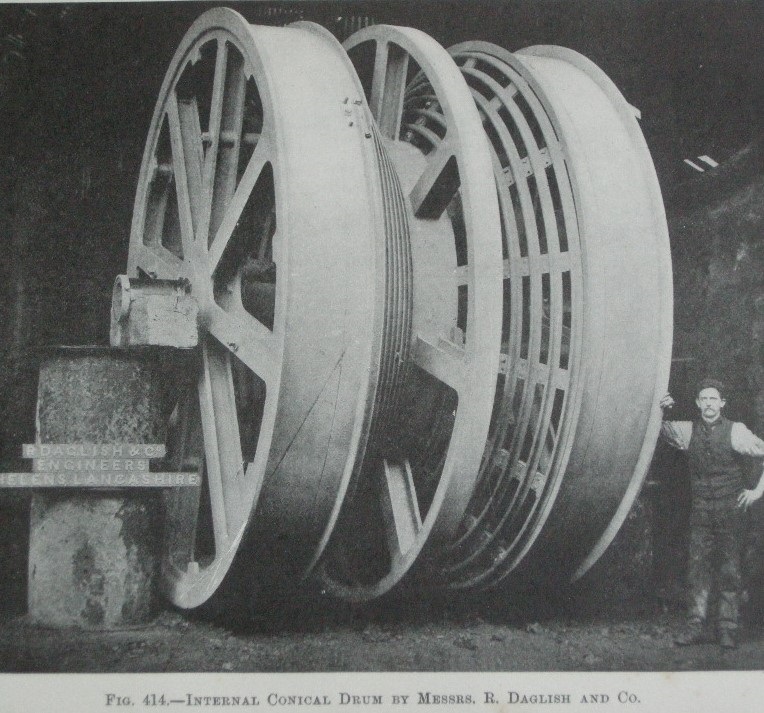 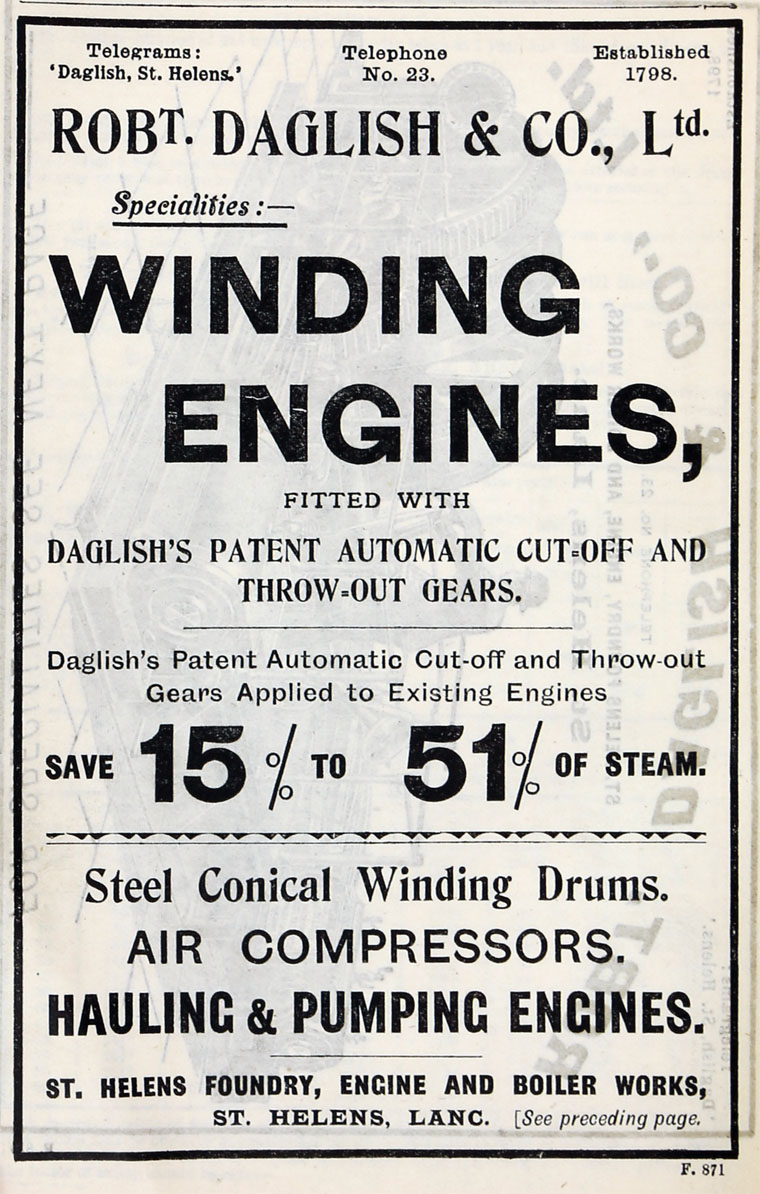 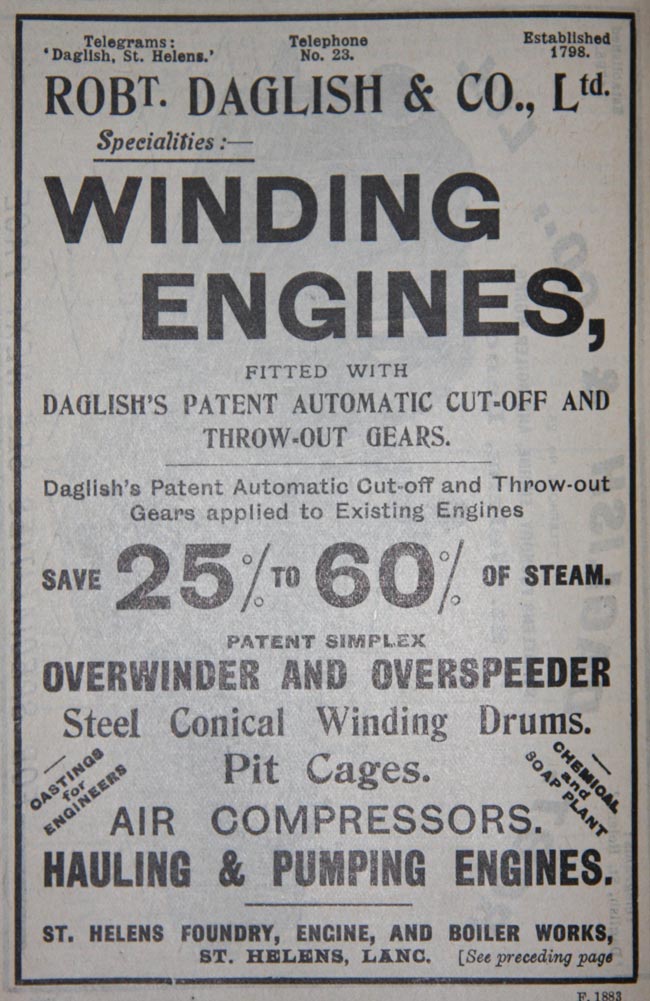 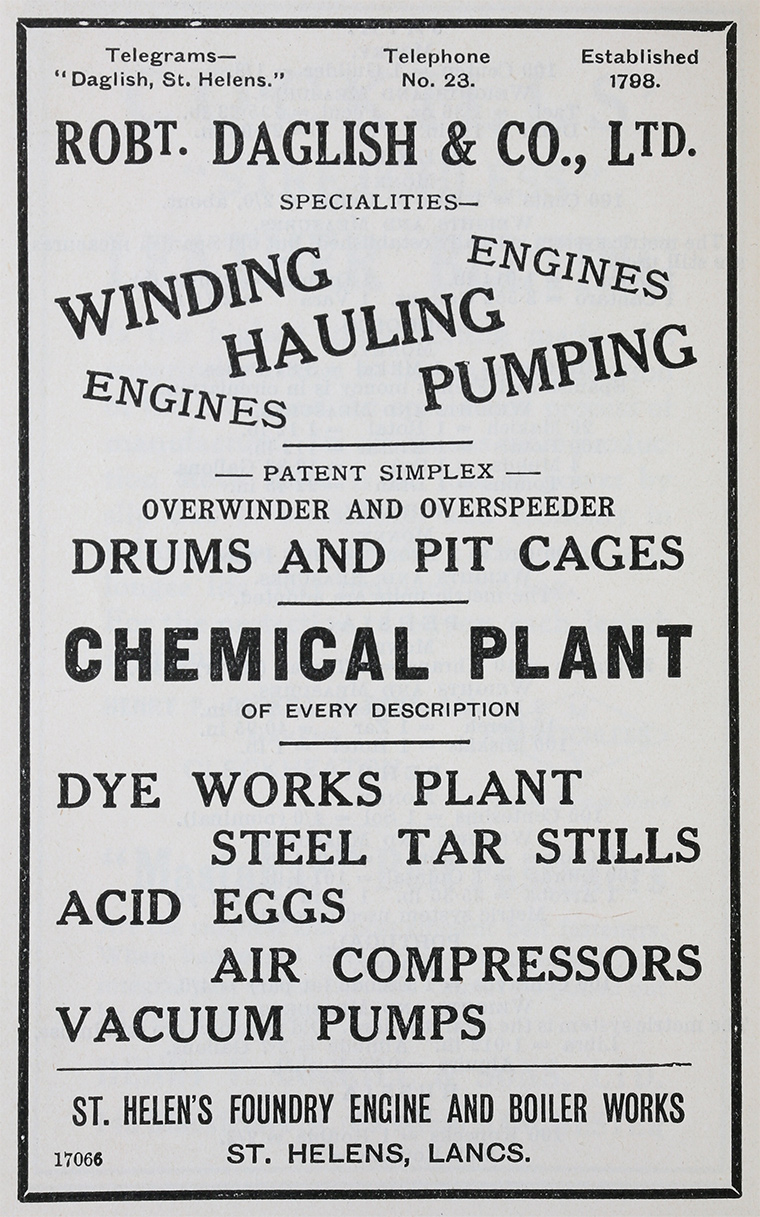 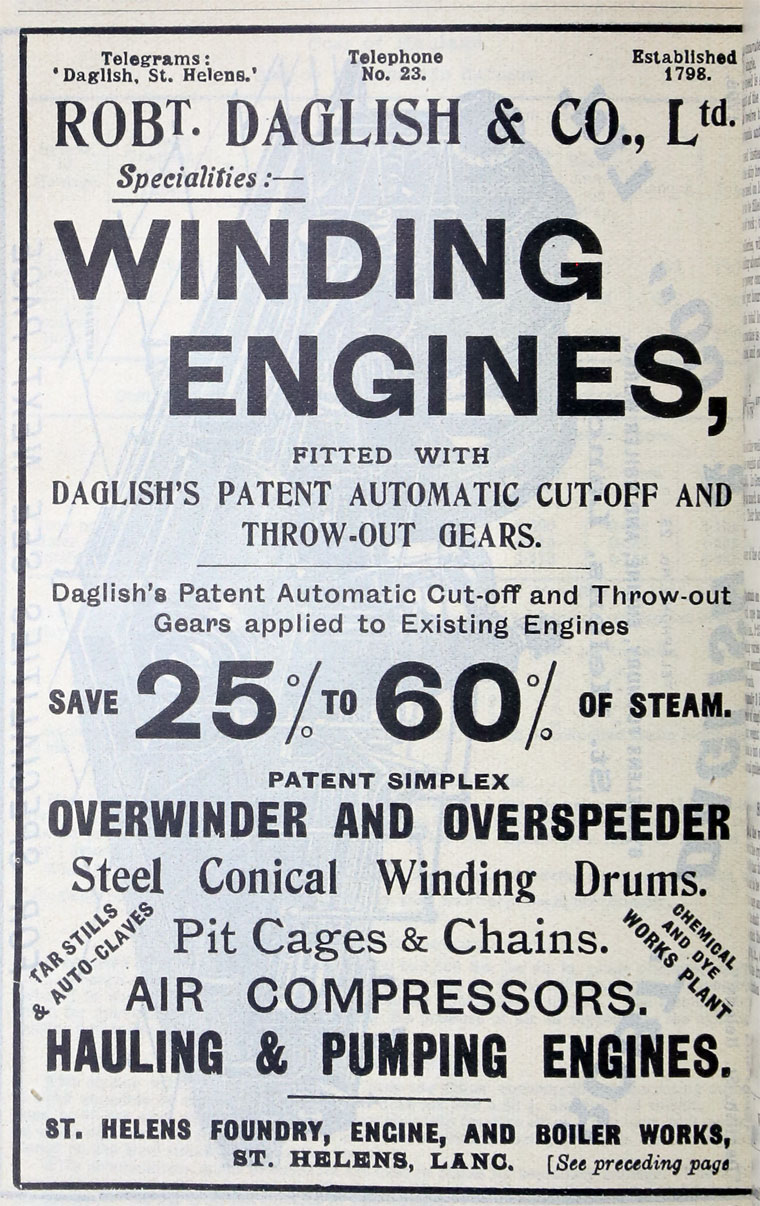 1849 'The North Railway Station at Liverpool ... in Waterloo Road ... Upwards from the Waterloo station, the station extends under Great Howard-street, which is supported by a neat iron bridge, of 116 feet span, erected by R. Daglish, jun., St. Helens[4]

1852 Partnership change. '... the Partnership heretofore subsisting between us the undersigned, Robert Daglish, Robert Daglish the younger, John Thompson, and Edward Thompson, lately carrying on business at Saint Helens, in the county of Lancaster, as Civil Engineers and Iron Founders, under the firm of Robert Daglish, junior, and Company, was dissolved on the 30th day of June 1850, by mutual consent...'[5]

1858 'A large brass screw propeller, for the steamer Doris, was sent on Tuesday from the foundry of Mr. R. Daglish, at St. Helen's, for Plymouth, where the vessel is being built. The screw was made according to Griffiths's patent, and is one of the largest brass screws made in this district, being 20 feet from blade to blade, and weighing upwards of 12 tons.'[7]

1884 Made a set of Provand's patent sea water distillation plant for use at Iquique, S America [10]

1919 Advert for engines for winding, hauling and pumping and other equipment

1927 Advert for winding, hauling and pumping engines and other equipment

1879 'SIXTY-SEVEN YEARS' OF SERVICE will shortly be completed by a workman named Richard Rogerson, who entered the employ of Messrs. Robert Daglish and Co., St. Helen's Engine, Boiler, Bridge Works and Foundry, St. Helen's, Lancashire, in 1812, and, his employers write, has never been in any other employ, has always been a faithful servant, and has never given the slightest trouble to them in any way. Messrs. Daglish also inform us that their cashier, who recently died, had been in their service for fifty years. Such instances as these of long service are worth recording in these days of changes and strikes.'[15]