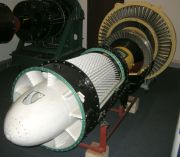 1948 F2/3 jet engine, with thrust augmentor behind. On display at the aeronautical museum at Manchester's Museum of Science and Industry 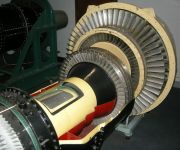 1938 The Air Ministry gave Metropolitan-Vickers a contract for development work on the engine, designated B.10, and named 'Betty'. This was not envisaged as a jet engine.

1939 The team, including Metrovick engineers led by David Smith, started work on a flyable design, the F.1.

1939 After Whittle's demonstration of his jet engine, Smith decided to end development of the F.1 and move on to a pure-jet instead, starting work on the otherwise similar F.2 in July 1940.

1940 the Ministry of Aircraft Production asked Metropolitan-Vickers to undertake the development of an axial-flow jet engine. The outcome was the now famous F.2 type, in which the gases flowed straight through the engine.

1943 On November 13, 1943, a prototype Gloster Meteor fighter equipped with F2 engines made a flight from Farnborough.

The F.2 was considered to be too complex; Metrovick then re-engineered the design once again to produce roughly double the power, while at the same time starting work on a much larger design, the Metrovick F.9 Sapphire (see below).

Karl Baumann designed the F3 ducted-fan augmentor for the exhaust of an F.2 engine. The augmentor was manufactured as a private venture but it was 15 years before its time. The simple jet was better suited to military aircraft and civil aircraft had a long way to go before requiring the augmentor. When by-pass engines were developed, the front-fan arrangement was the preferred option.

Rolls-Royce were successfully producing Whittle-type engines with centrifugal compressors, but the Ministry of Aircraft Production saw that the furure lay in axial flow, and placed an order with R-R to produce the Avon engine. Six months later the MAP negotiated with M-V to produce an engine of similar thrust, to be called the Sapphire. This would provide a fall-back position in the event of problems arising with the R-R Avon.

M-V's Dr. D. M. Smith departed from the compressor blade designs derived from Dr. Griffith's early work, and introduced a radically different type, which proved to be a major advance in terms of stalling characteristics.

1947-8 Despite successful developments, culminating in the promising Sapphire engine, Metropolitan-Vickers decided to drop out of the aero-engine business. At the behest of the Ministry of Supply, Metropolitan-Vickers handed over the Sapphire project to Armstrong Siddeley Motors. M-V completed the first ten development engines and then worked closely with Armstrong Siddeley Motors. The Sapphire went on to be highly successful, powering the Gloster Javelin FAW 1, 2, 4, & 7, Hawker Hunter F2 & F5, and Handley Page Victor B1. It was also built under licence by the Curtiss-Wright Corporation as the J.65, 13,000 examples of which powered six types of combat aircraft.[1]