Grace's Guide is the leading source of historical information on industry and manufacturing in Britain. This web publication contains 138,193 pages of information and 223,451 images on early companies, their products and the people who designed and built them.

(Redirected from Napier and Sons)
Jump to: navigation, search 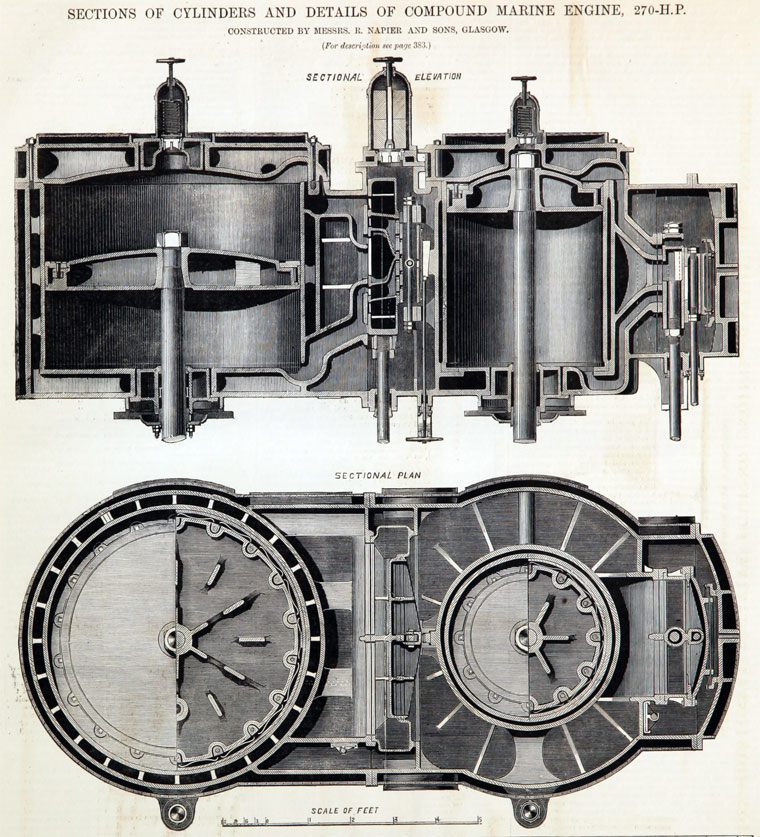 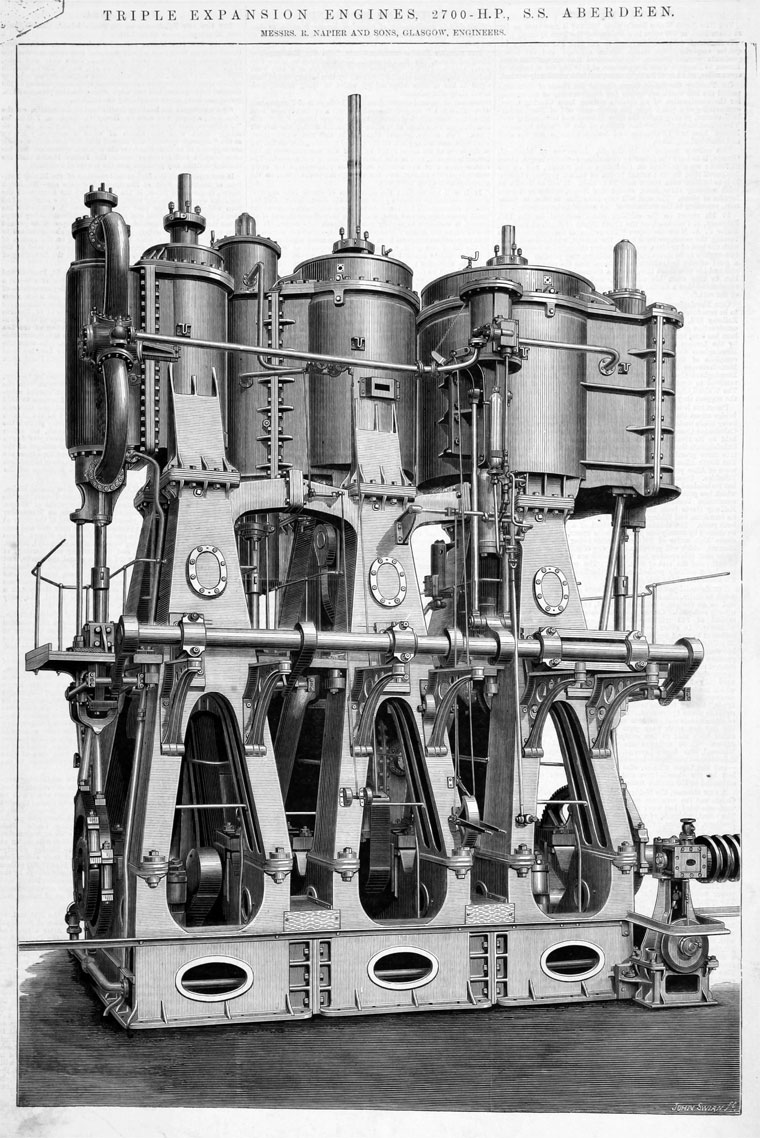 R. Napier and Sons of Govan and Lancefield Street, Glasgow were shipbuilders and engineers.

Napiers built the engines for the first four vessels of the Cunard Line: the Britannia, the Acadia, the Caledonia, and the Columbia, each of 400-horse power

Napiers also built for the Navy the Audacious, the Invincible, Malabar, and the powerful ram Hotspur.

1848 Robert Napier took over the bankrupt Parkhead Forge in the east end of Glasgow to supply wrought iron plates and forgings for his works.

1852 Robert Napier's business was renamed Robert Napier and Sons, when he took his 2 surviving sons, James and John, into partnership. James and John were put in charge of the business but the company began to lose its technical advantage to competitors such as Denny and Elder.

After supplying a number of engines for vessels of the Navy, the firm constructed several ironclads; among them was the Erebus, a floating battery for service during the Crimean War, the Black Prince, and the Hector. Also built a turret ship, named the Rolfkrake, to the order of the Danish Government.

1859-60 The company lost money on construction of their first ironclad warship, HMS Black Prince, because of the difficulty of manufacturing wrought iron armour plate to the Admiralty specification.

With Napiers on the verge of bankruptcy, William Beardmore senior was recruited to Parkhead, and solved the problem. However, Napier's financial problems persisted, exacerbated by an open disagreement between Robert and his sons about the future direction of the enterprise.

1861 Mr. Beardmore entered into partnership with William Rigby, for the purpose of carrying out on a more extensive scale the rolling mill and forge at Parkhead, Glasgow[1].

1865 See 1865 Clyde Shipbuilders for detail of the tonnage produced

By 1871 Robert Napier and Sons were forced to sell their company's interest in the Parkhead Forge.

1877 The shipyard and engine works were purchased for the sum of £270,000 on behalf of Mr. John and Mr. James Hamilton and Mr. A. C. Kirk and carried on the business under the old title[4]. John Napier left the business.

1877. 'The Copartnery carrying on business as Engineers and Shipbuilders in Glasgow, and at Govan, near Glasgow, under the firm of Robert Napier and Sons, of which the now deceased Robert Napier, Engineer and Shipbuilder in Glasgow, and John Napier, Engineer and Shipbuilder there, were the sole Partners, has been terminated, and the business of the Copartnery placed in liquidation, as on the 11th day of November current. The liquidation will be conducted under the charge of the surviving Partner, Mr. John Napier, at his temporary office, No. 101, St. Vincent-street, Glasgow, who will subscribe the name of the late firm as in liquidation only. The premises at Lancefield and Govan, with machinery and plant, and the goodwill of the business of the late Company, have been transferred to Messrs. Alexander Carnegie Kirk, John Hamilton, and James Hamilton, Junior, Engineers and Shipbuilders, Glasgow, who will, after the said day of November current, carry on the business in these premises, under the same firm of Robert Napier and Sons.....Signed by James Smith Napier, Robert Bennett Browne, Adam Paterson, David Barr, and Richard Robb Grant, being a majority and quorum of the Trustees of the said Robert Napier...'[5]

1879 The Pizarro, the first steel ship constructed by Napiers, was built for Pacific Steam Navigation Co; she had a displacement of 3400 tons, was 340ft. long by 40ft. beam, and fitted with engines of 2000 ihp.

The mercantile marine readily adopted the compound steam engine but the Admiralty remained sceptical of the new approach until Kirk told them that he had sold compound engines of around 12,000 hp to the Imperial Russian navy from 1883. The Admiralty responded by placing two orders for cruisers at Napiers: the first of these, the SS Galatea, performed above their expectations at trials in 1885.

1889 See 1889 Shipbuilding Statistics for detail of the tonnage produced

1911 Harland and Wolff acquired the London and Glasgow Iron Shipbuilding Co's shipyard, together with the adjoining yard of Mackie and Thomson, and Robert Napier and Sons' old yard, which had been vacated by William Beardmore and Co.