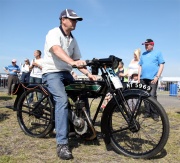 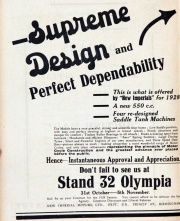 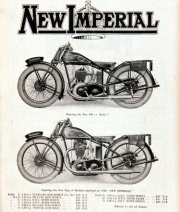 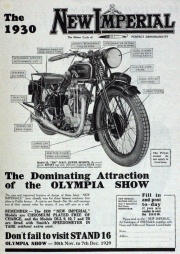 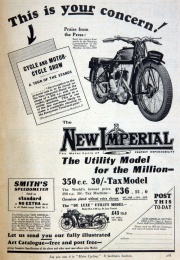 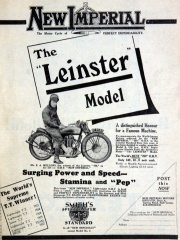 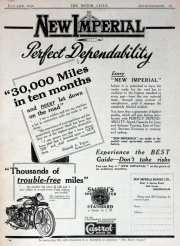 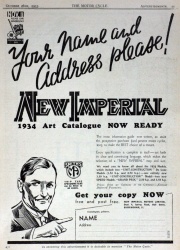 1887 Imperial Cycle Co Ltd (or its precursor) was established as manufacturer of pedal cycles.

1901 First motorcycle shown with the engine mounted in front of the handlebars above the front wheel, and the transmission consisted of a leather belt which drove the front wheel but it was not successful and the company went back to making cycles.

At this time another new company seems to have been established by Downs as New Imperial Cycles Co Ltd, presumably as a subsidiary.

Post WWI: The company moved to Hall Green, Birmingham, and added more models to their range.

1921 That year brought success in the TT when Doug Prentice won the 250cc Junior race. Using that to advertise the make, they increased the range still further.

Mid-1920s The firm was now making its own engines and the JAP motors became an option before being dropped.

1927 New Imperial Motors (1927) Ltd was incorporated as a public company, which continued the business.

1930 The range had been so extensive that the firm decided to cut back and concentrate on six-cylinder models.

1932 Major advancements were made with the first appearance of the company's unit-construction models with the engine and gearbox built as one unit, wet-sump lubrication and pivoted-fork rear suspension.

Throughout the early 1930s developments were made on the sporting side and there were many successes.

c.1933 A subsidiary company (presumably New Imperial Cycles Ltd) was set up to manufacture pedal cycles; by the end of the 33/34 reporting period it was making a small profit[4]

1939 The business was bought by Jack Sangster, of Ariel, who planned to move it to the Triumph factory in Coventry, but production remained at Hall Green until the end of the decade.

1940 The planned move to Triumph took place, but the factory was bombed. Edward Turner's 3TU model was supposed to carry New Imperial badges, but never saw production. Proposals to use the name after the war did not materialise, so the name was never resurrected.

Further information can be found at the New Imperial Owners' Association web site. [1]

Speed King-JAP was a motorcycle produced between 1913 and 1914, by New Imperial and sold by J. G. Graves of Sheffield, as their own marque.

This model was the Light Tourist with a different tank transfer. It had the 293cc JAP sv engine, two-speed gearbox and belt final drive. The rigid frame had Druid forks and foot-boards, and Bowden brakes were fitted.

The intention had been to sell the machine by mail order and with interest-free credit, but the New Imperial was cheaper and the arrival of the first World War brought the idea to an end.

Graves was a motorcycle produced from 1914 to 1915 and sold by a Sheffield store.

This firm had the machines built for them by New Imperial. It was listed as the Speed King and fitted with a 2.5hp JAP engine that drove a two-speed gearbox, belt final-drive and Druid forks.

Wartime was not a good period for the trade and the make was soon gone from the market.