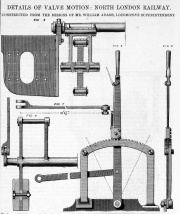 1869. Details of Valve Motion, constructed from the designs of William Adams. 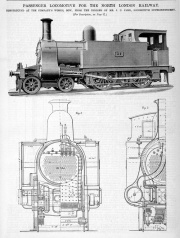 The North London Railway was known as the East and West India Docks and Birmingham Junction Railway until 1853. [1]

1846 The company was incorporated to build and own the line (which eventually totaled 12 miles in length). [2]

1850 The railway opened and connected the north of London to the East and West India Docks. Its headquarters and locomotive works were situated at Bow.

William Adams planned and equipped the workshops at Bow for the East and West India Docks and Birmingham Junction Railway, soon to change its name to the North London Railway.

The NLR initially ran trains from Camden to Poplar, and from there via the London and Blackwall Railway onto Fenchurch Street station.

1851 The line had been extended westwards to Primrose Hill to join the London and North Western Railway (LNWR).

1854 Adams was appointed as the company's locomotive engineer, a post he held for eighteen years. Here he introduced his noted series of 4-4-0 tank engines, the first to utilise the laterally-sprung bogie, and the first continuous train brake

1854 At the eastern end, a spur line connecting the NLR to Stratford from Victoria Park opened but was not used by passenger services.

1865 An extension from Dalston Junction to Broad Street was opened; Broad Street became the main terminus instead of Fenchurch Street, and the Poplar line became a branch.

1866 Standard engine designed by W. Adams and illustrated in The Engineer (see image yr 1868).These engines were built at the Bow Works of the North London Railway between 1863 and 1869, to the designs of William Adams, following the general lines of Stephenson's tank engines of 1855 for the same railway, but hte bogie was of a much improved type, with longer wheel base.[3] [4]

1908 The NLR was taken over by the London and North Western Railway in December 1908, though the NLR remained a separate operation with its own Board of Governors.

1916 The Broad Street to Richmond and Kew services were electrified; LNWR was responsible for these services, and also was joint owner of Broad Street station.

In 1979 the line between Richmond and Dalston via Gospel Oak, plus the spur line to Stratford, was joined with the former Eastern Counties and Thames Junction Railway to form what is known today as the North London Line. The line between Willesden Junction and Camden via Primrose Hill is now served by Watford DC Line trains out of Euston, although Primrose Hill station itself has been closed.

The Docklands Light Railway follows the path of the long-disused North London Railway from Bow Church to Poplar and the northern section of the East Cross Route (A12) built in the late 1960s used the route between Old Ford and Victoria Park stations, which were demolished during the road's construction.

The East London Line Extension (currently under construction) will take over the abandoned stretch between Dalston and Shoreditch.