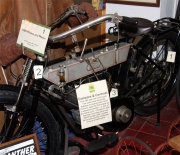 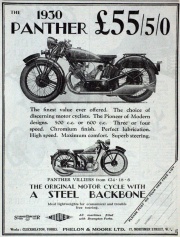 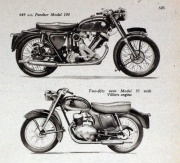 Phelon and Moore, of Cleckheaton, Yorkshire, maker of motorcycles.

1901 Phelon had already been in business with Harry Rayner, as P and R, where they built their first motorcycle. After Rayner died in a car accident, Phelon unable to produce the machine himself, sold his first design to Humber for royalty payments.

1904 The P and R engine was further developed and the all-chain drive was replaced by a simple two-speed gear system with clutches. Their first offering was a two-speed forecar but as this was not popular, the partners' attention focussed on motorcycles. The first models were typical of those times and were based on bicycles with engines. Before long the name was recognised in the field of hill climbs and trials.

World War I. That model was taken on by the Air Force and used by their dispatch riders. A V-twin engine had been on the drawing board, but this was dropped with the outbreak of war.

1922 Phelon and Moore introduced a new design of motorcycle, a sports model with four speed gearbox and a 4.5hp engine. With its arrival came the Panther name that was to stay with the firm throughout its existence. After the Panther trademark came into use the catalogue boasted “A great Leap forward!”, and that was truly so.

1926 The firm were successful at the Olympia show, where they exhibited their 242cc V-twin Panthette, with a transverse engine and four-speed gearbox, designed by Granville Bradshaw of ABC fame. Sadly it failed to sell in any great quantity as it was very expensive and too advanced for the times.

1928-1929 Speedway and two-stroke models appeared on the market and they listed the Redwing - a big single with a tuned engine.

1931 Saw the arrival of headlights that could could function independently.

1932 The 249cc model was introduced. Although it was fitted into a conventional frame with a downtube, the engine had an inclined cylinder and the oil tank formed in the crankcase.

1933 The company forged a link with Pride and Clarke who sold large numbers of their 250cc machines.

1939 The 250cc model supplied to Pride and Clarke was given mudguards and a red-panelled tank, and sold quite cheaply. It was the subject of some derision but proved itself to be a good worker.

1940 The firm had had many plans and designs on the drawing board but these were all shelved as production turned to war contracts.

Post War to 1953. The company produced three singles and several variations including a trials version.

1956 The three singles were joined by two lightweights with Villiers engines.

1959 A scooter, known as the Princess joined the range.

1960s The arrival of the very successful Mini cars found Panther in a shrinking market.

1962 The Official Receiver was called in, although production continued.

1964 The range was cut still further - to three models.

1965-1967 Just one single and one twin trickled out of the factory at a dwindling rate.