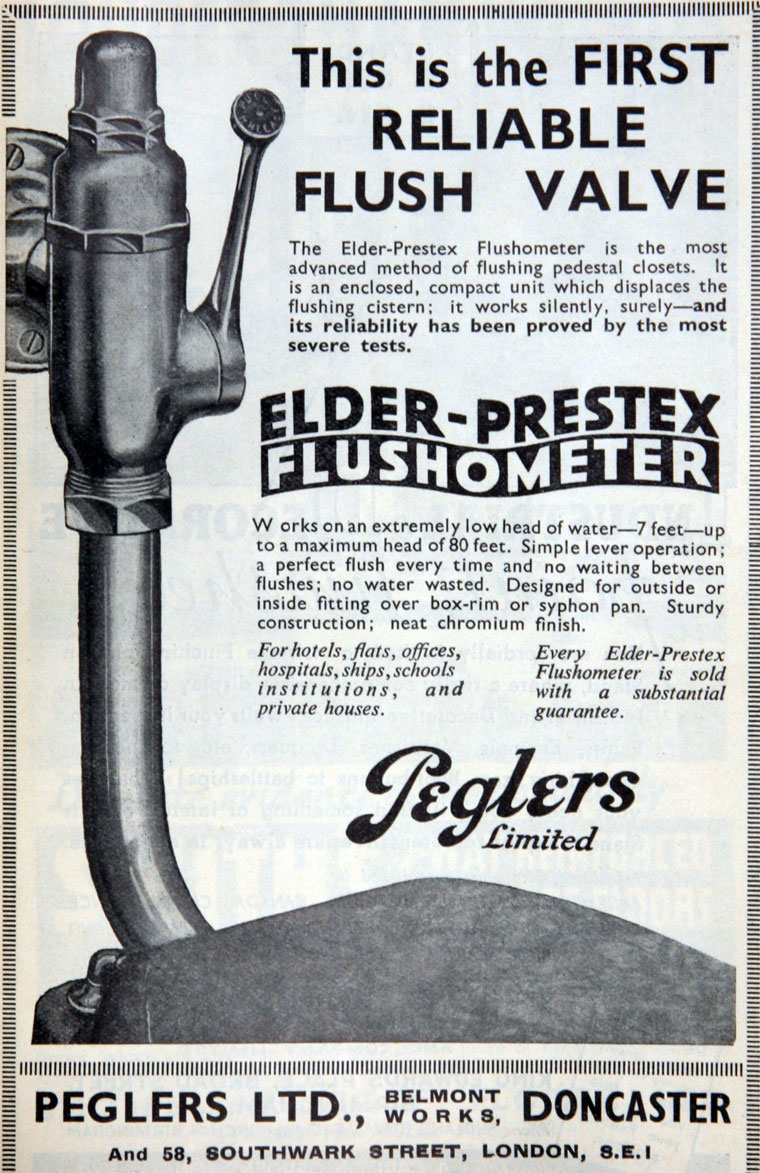 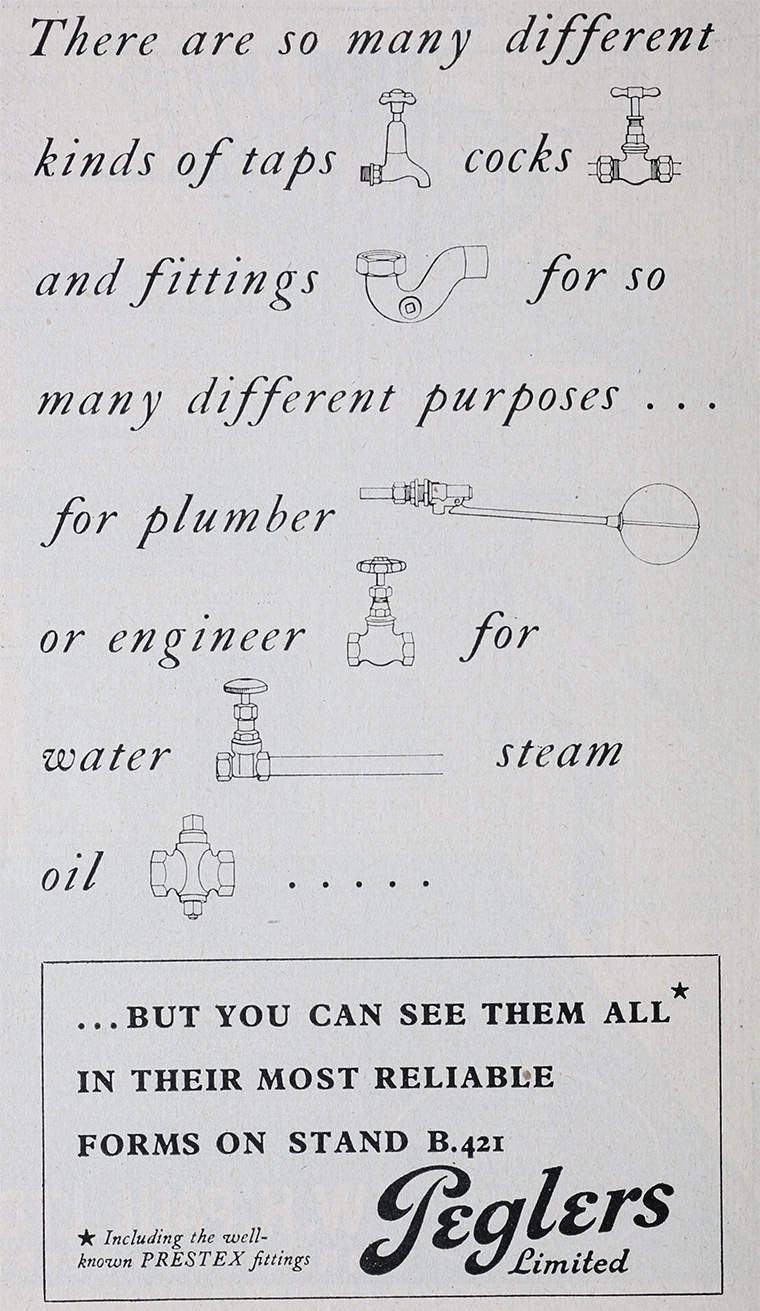 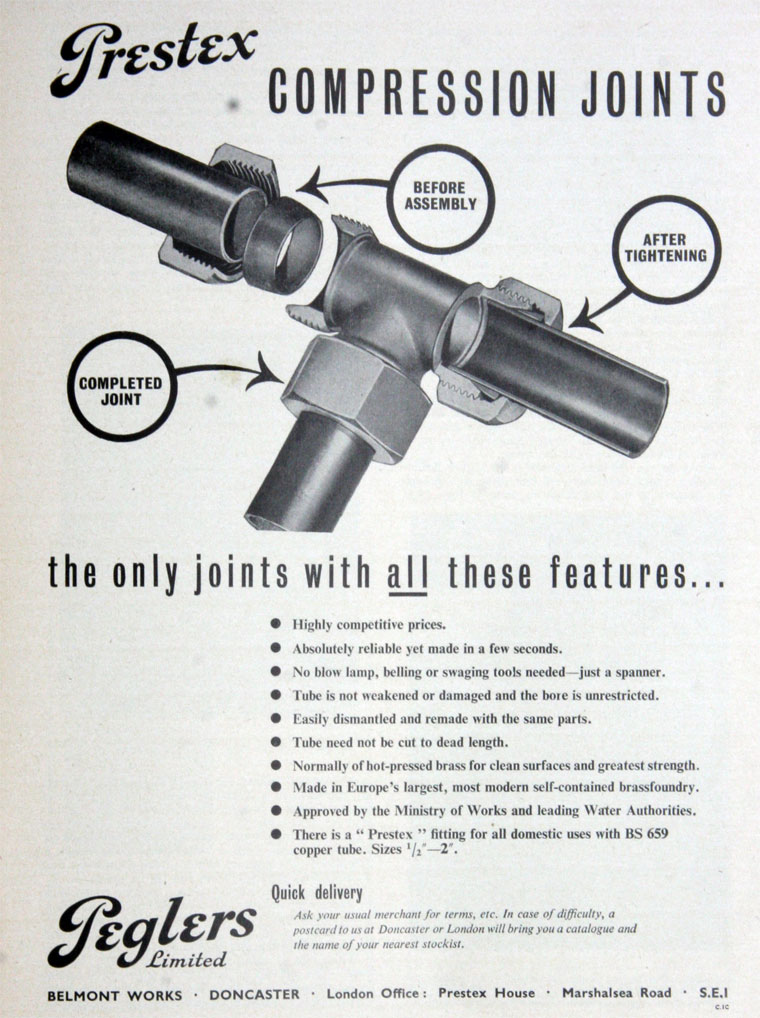 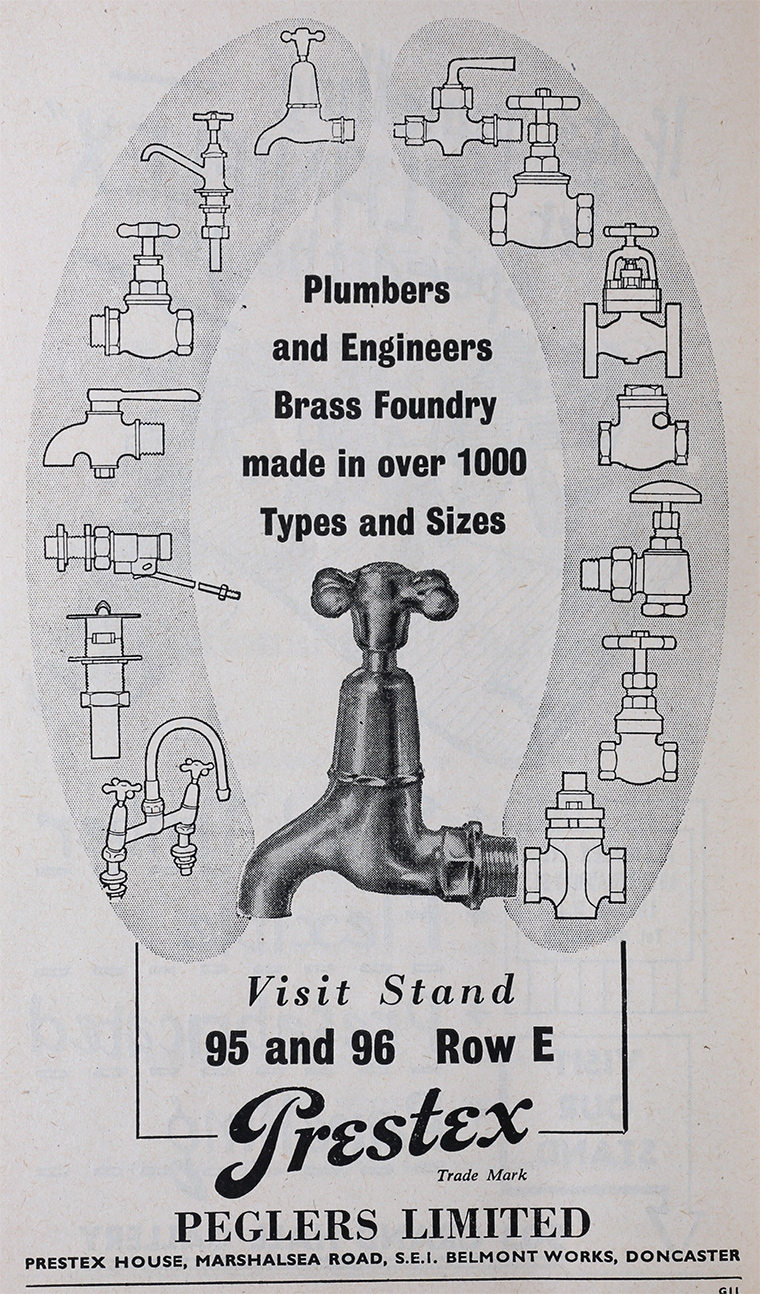 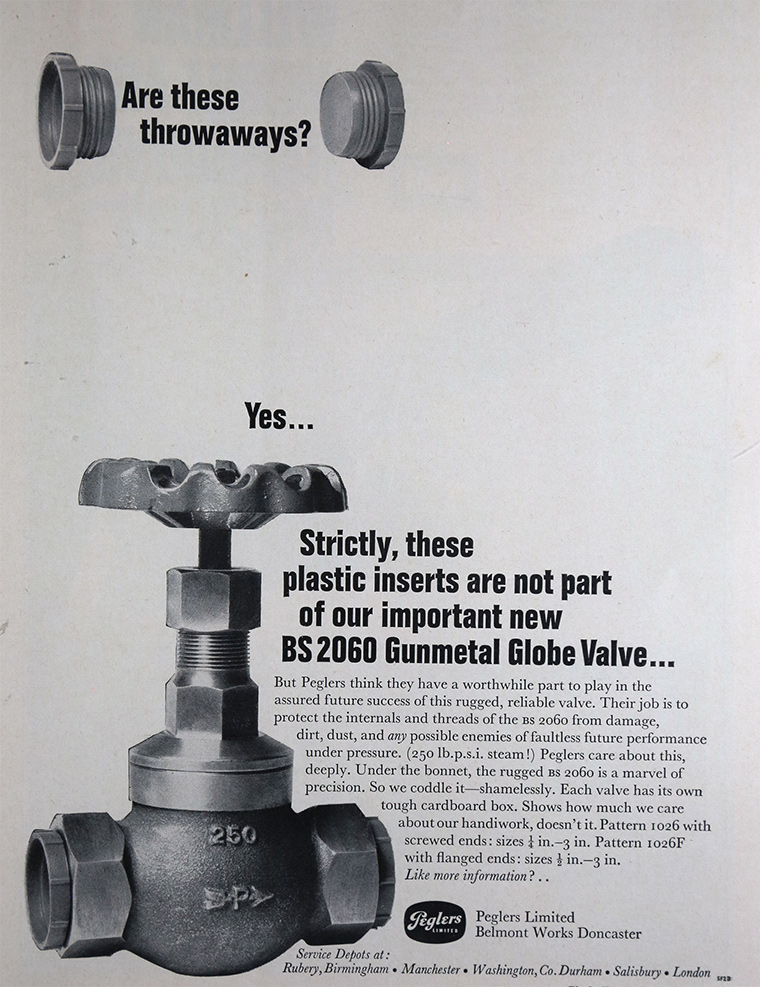 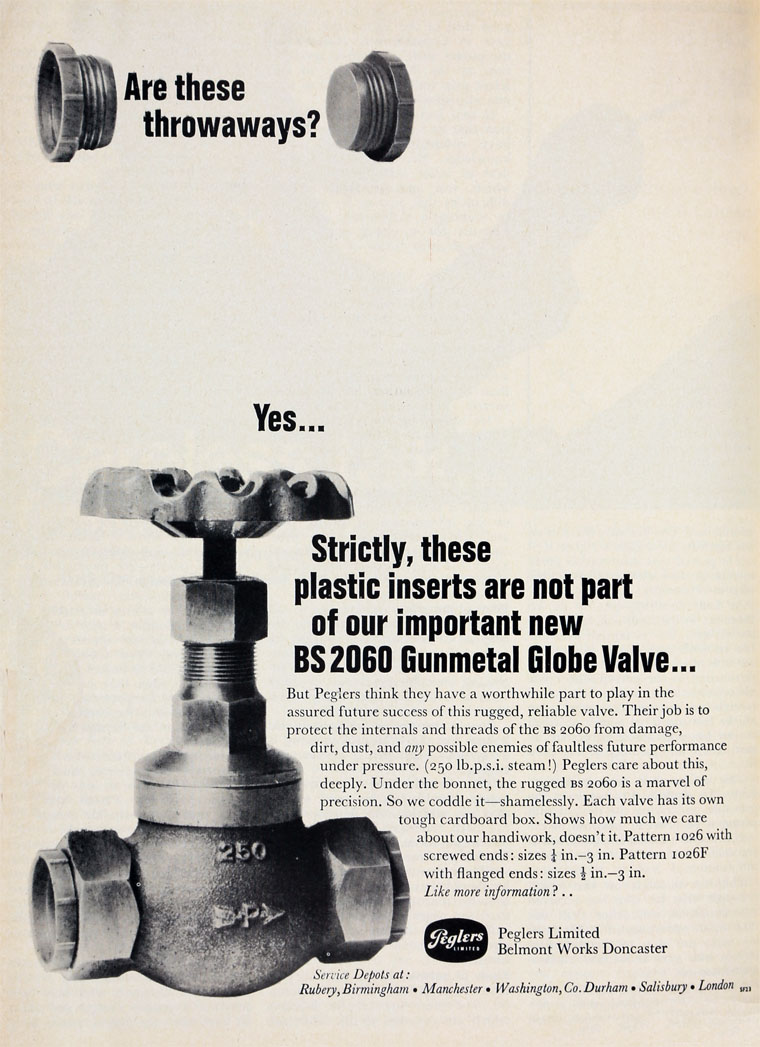 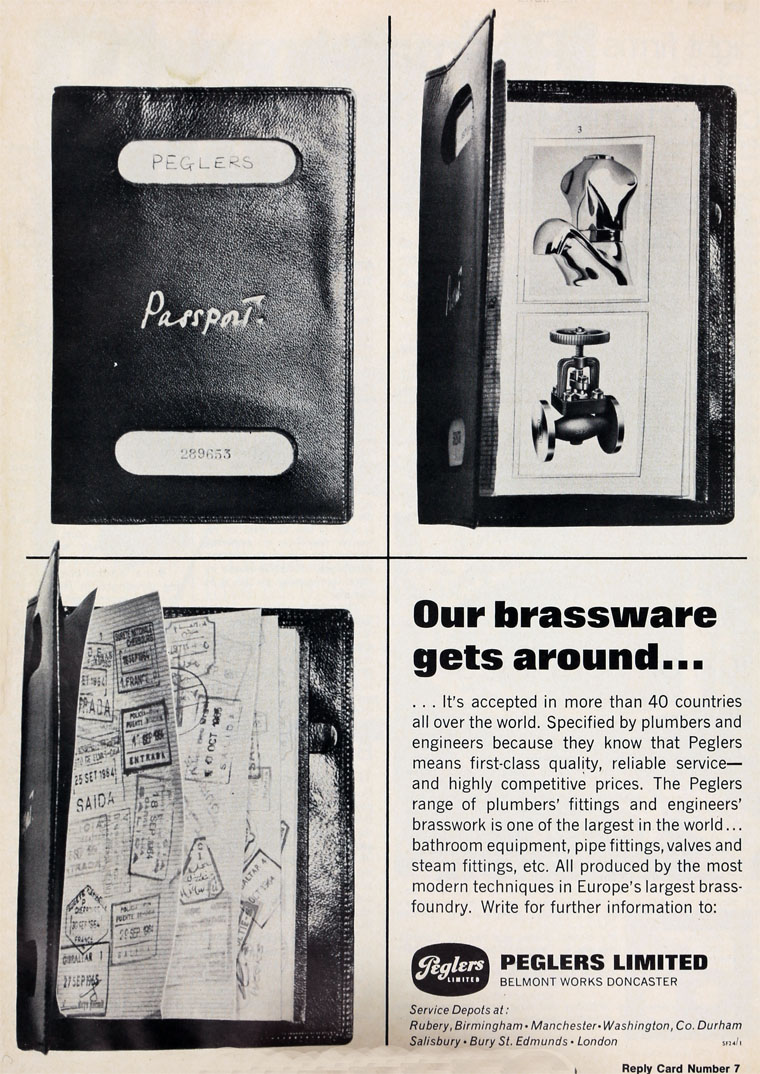 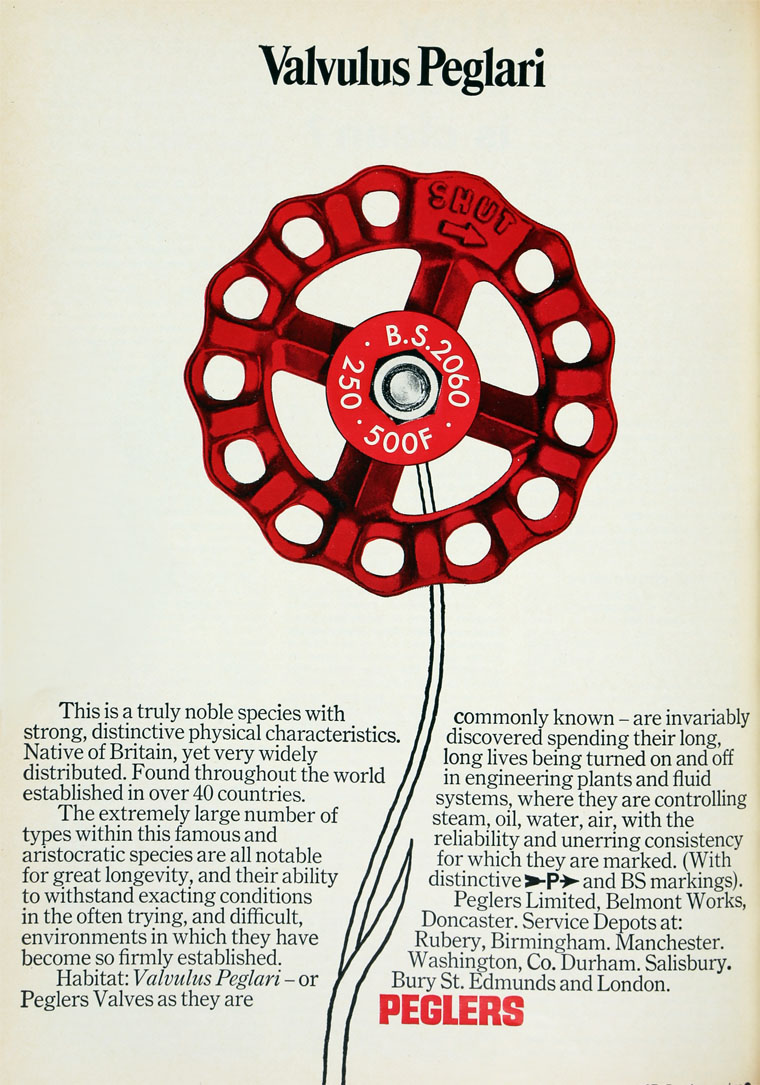 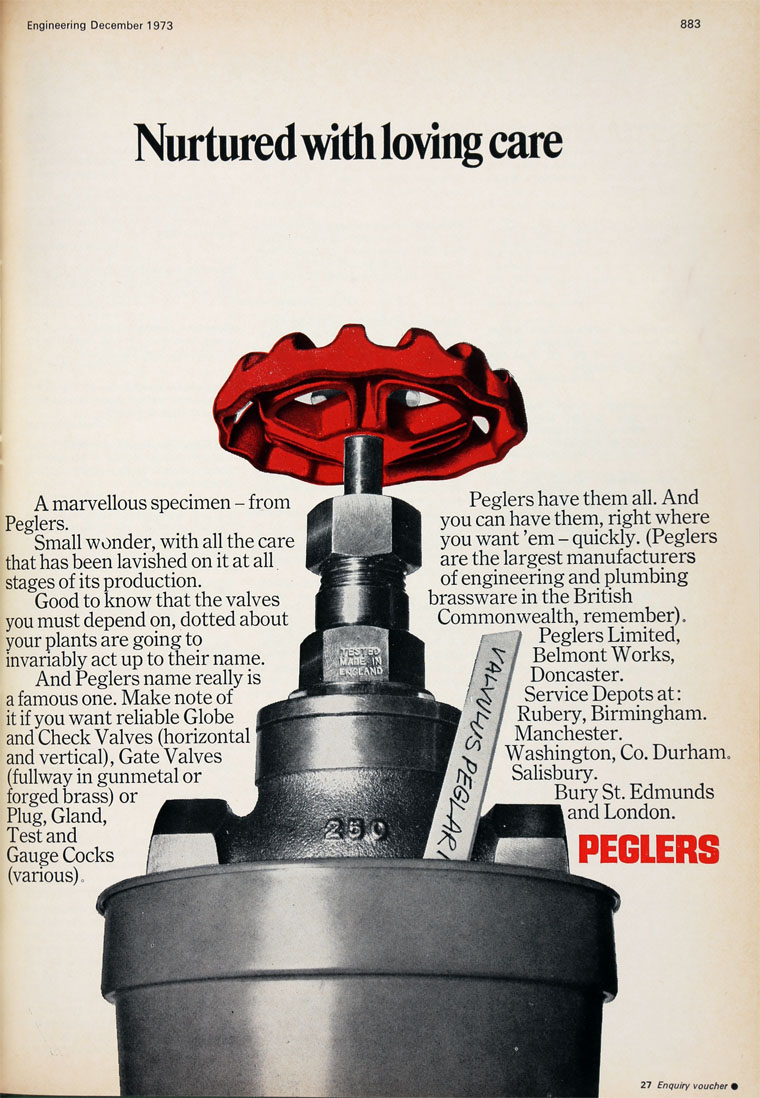 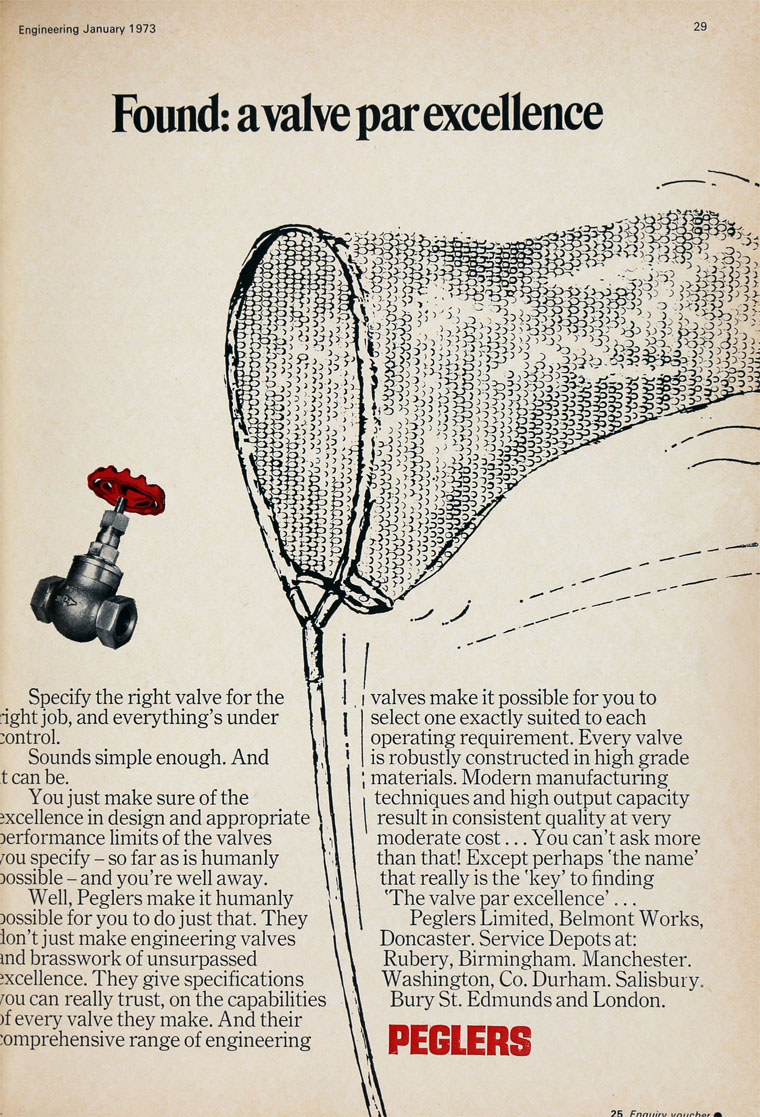 Manufacturer of taps and fittings for plumbing and sanitary engineers, steam, hot water and mechanical engineers.

1899 Frank Pegler inherited the Northern Rubber Co but he was keen to expand the business. He had already started a merchant company in Glasgow. He met Fred Birchall, who had gained experience as a brass founder, starting work aged 13 at the Hexthorpe Brass and Iron works in Doncaster, and rose through the ranks to become Manager and then went to work for brass founders Mckay in Glasgow. Frank agreed to put up the money for Fred to start a new operation to supply his merchandising company. Pegler Brothers and Co was established.

Using the latest methods at the time Peglers soon expanded from manufacturing products for the steam industry to manufacturing other complex valves. One of the catalysts for this expansion was the screw down tap. The tap was invented in 1845 but had not been successfully mass-produced before Pegler's inception.

1904 The increased production soon meant that Peglers needed to increase the size of the factory. Land was bought at Balby and, in 1904, the Belmont works were built. These works are still at the heart of Pegler's modern seven acre site.

1913 Fred Birchall wanted to have the most advanced factory in the country and took a trip to the United States in order to look at, what was then, the world's most advanced manufacturing companies. On his return he introduced revolutionary manufacturing techniques such as the capstan lathe and the pneumatic chuck.

1914 Incorporated as a private company: Pegler Brothers and Co (Doncaster)

WWI. Peglers switched to making shell fuses and shell sockets. A new subsidiary, Yorkshire Aeroplane Co was registered in 1916 but only completed its first Sopwith fighter plane in 1918.

After the war the factory resumed production of water fittings, steam and radiator valves with even more technically advanced production methods being introduced. Steam power replaced by electric power. A more sophisticated quality control system was introduced and carefully designed packaging brought products to customers in perfect condition - a concept well ahead of its time.

1932 The company was renamed Peglers Ltd.

1935 Peglers Ltd was floated as a public company[1]

WWII. The Second World War saw Pegler put their advanced production techniques into the war effort, making brass shells, fuses and valves and taps for military use. 6,000 Pegler taps were used on the Ark Royal and there were contracts from Rolls-Royce and Vickers. Over 2000 employees were engaged in the Pegler war effort.

Post-WWII. After the war, Pegler's output was further boosted by the massive rebuilding programme.

1959 Took over the Pegler and Louden subsidiary

1966 Group restructed under a holding company

1968 The height of this expansion was the merger of Pegler with Hattersley Holdings; name was changed to Pegler-Hattersley[5].

1986 Tomkins Engineering Group bought this group of companies and de-merged the group.

2017 Pegler Yorkshire is part of the Flow Control division of Aalberts Industries.