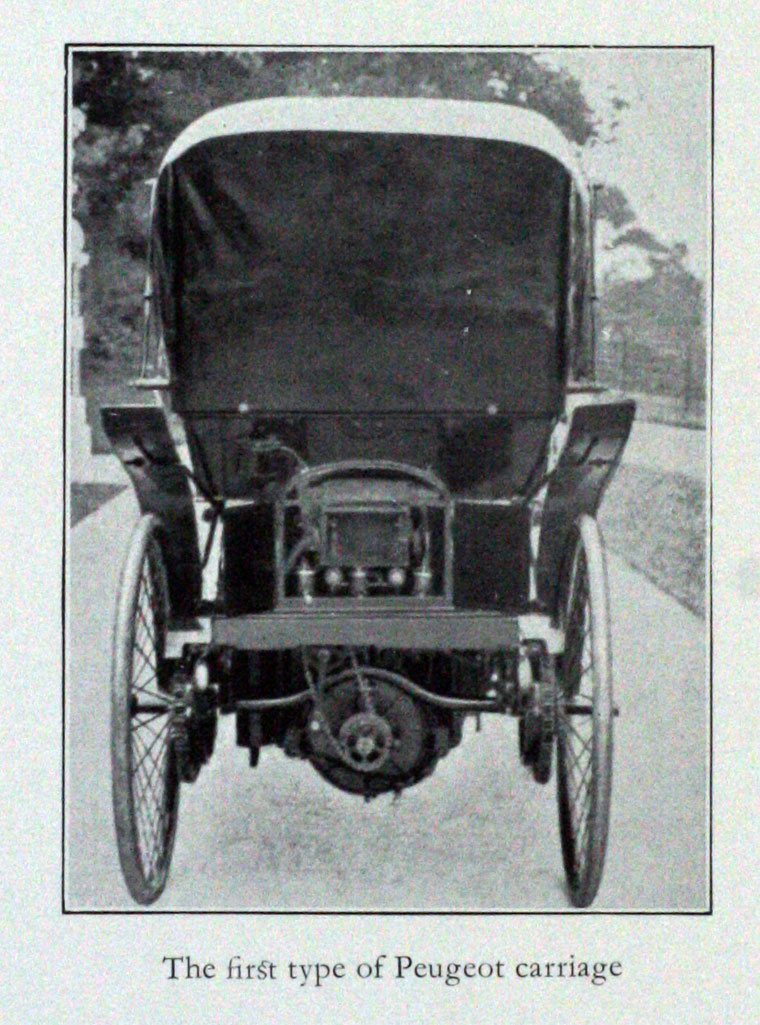 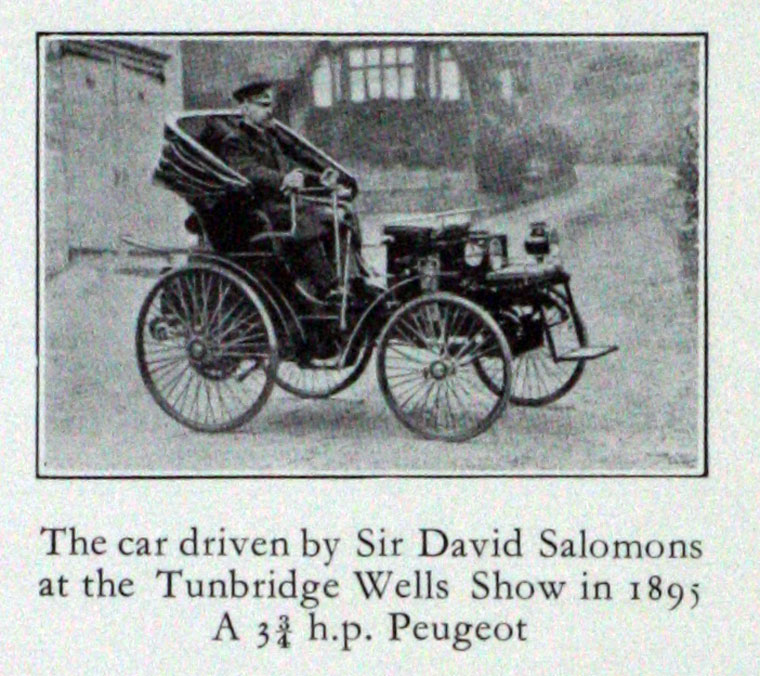 1896. No. 44 The Second Peugeot Autocar in the Paris-Marseilles Contest. 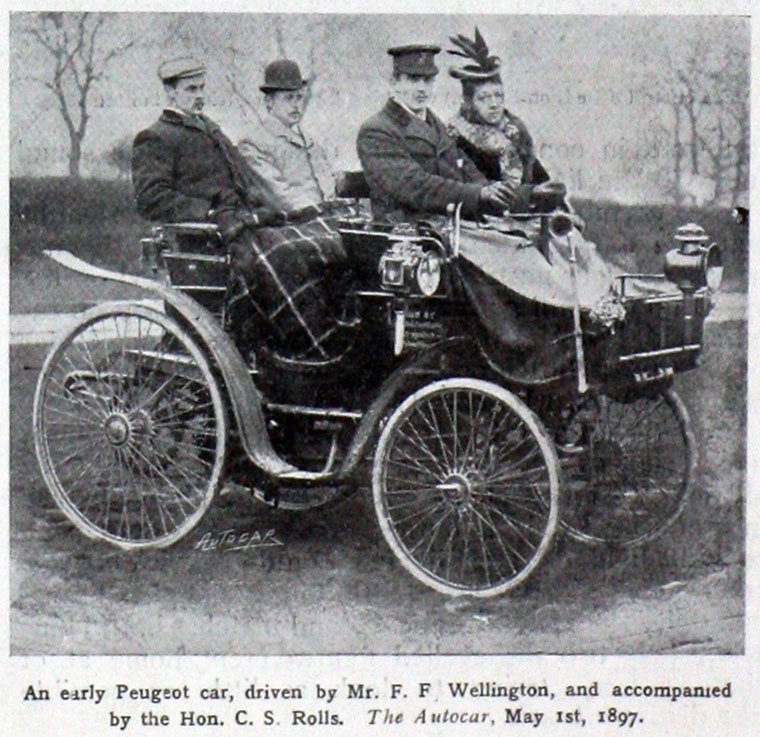 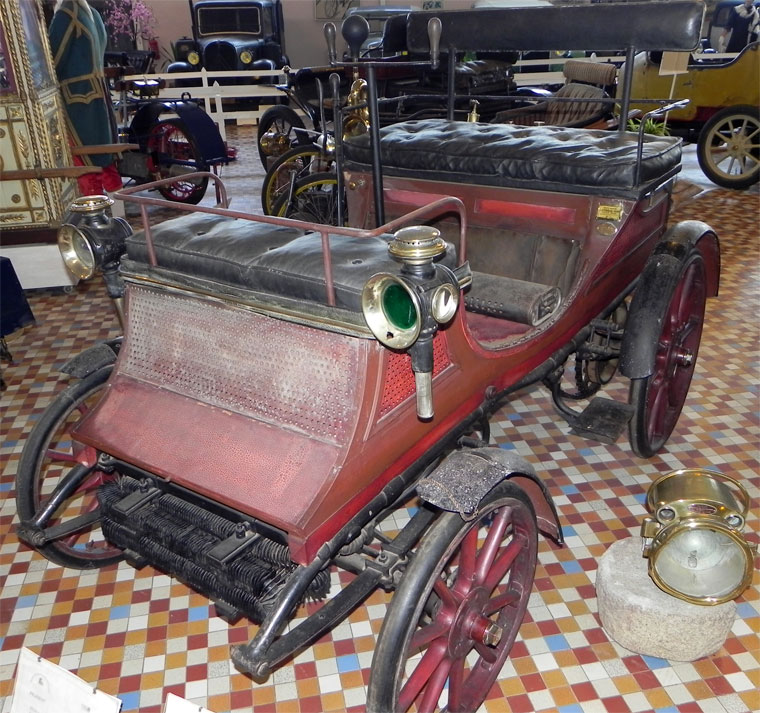 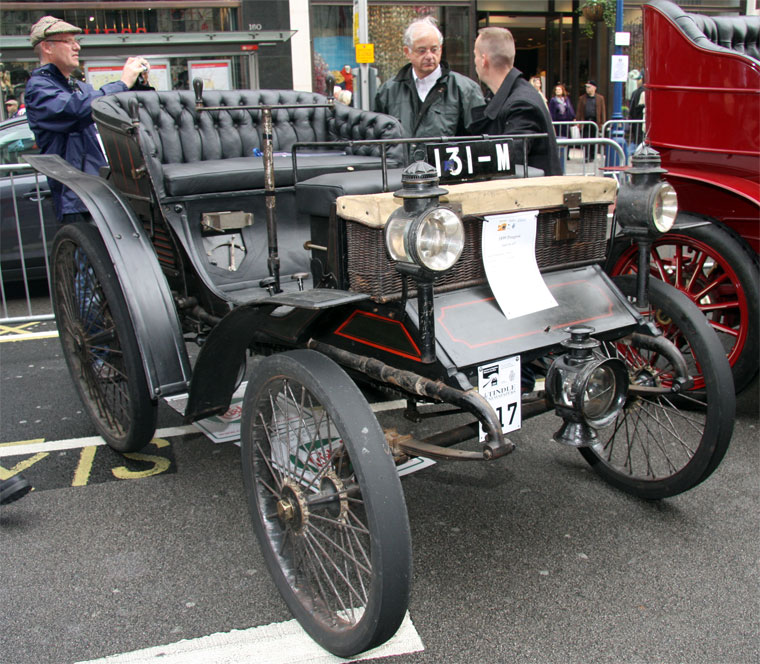 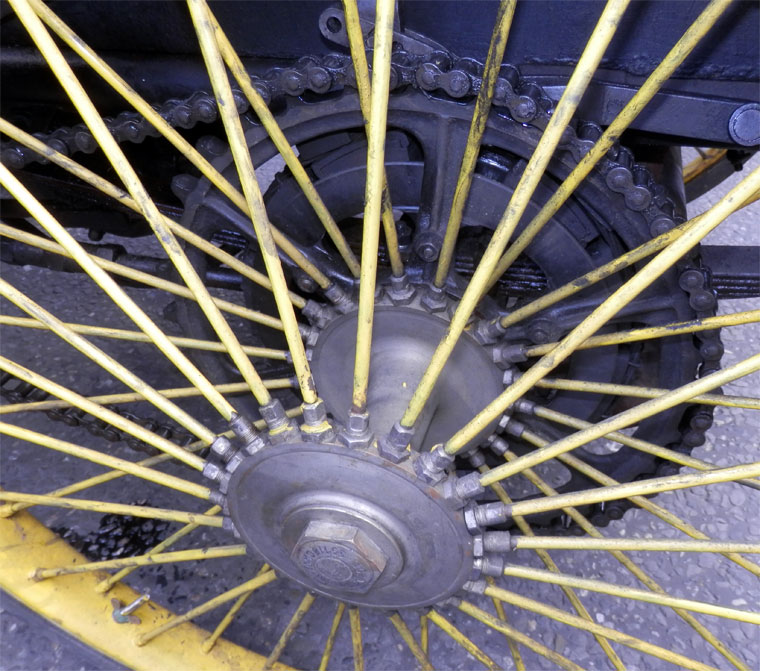 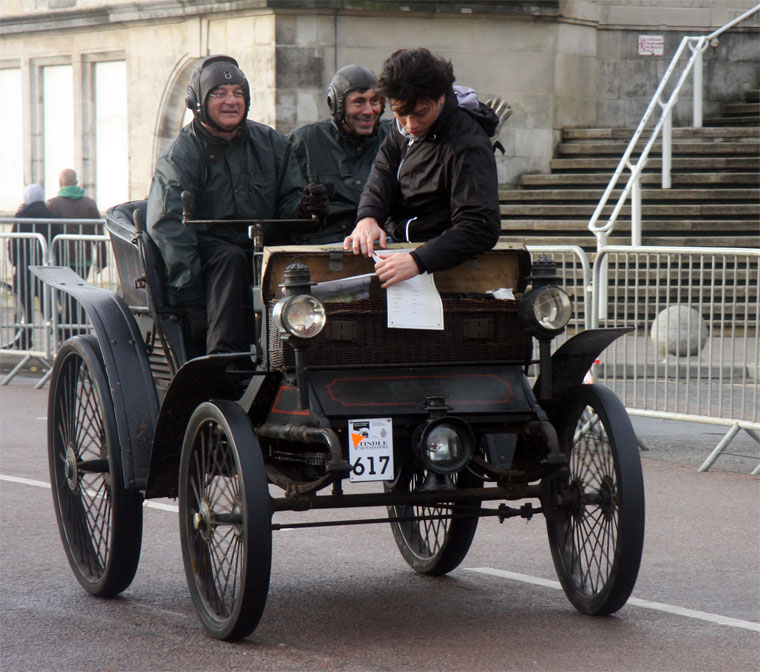 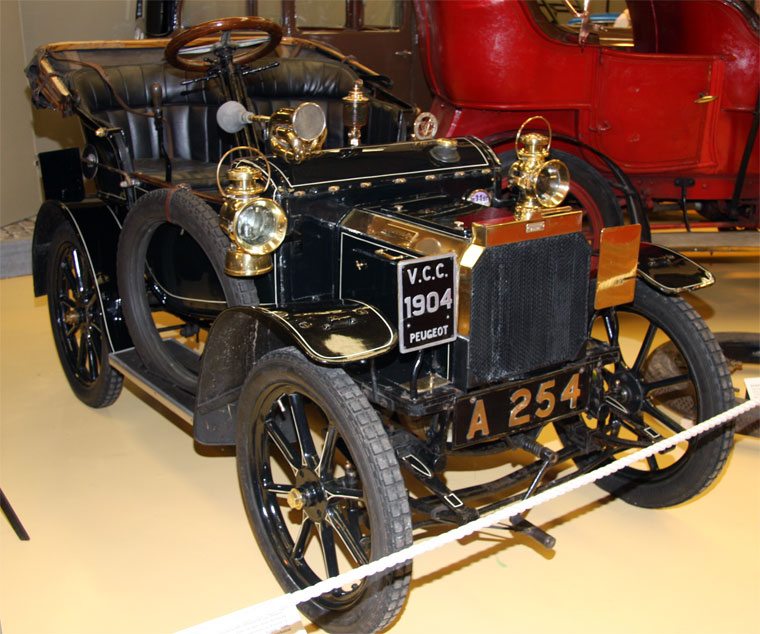 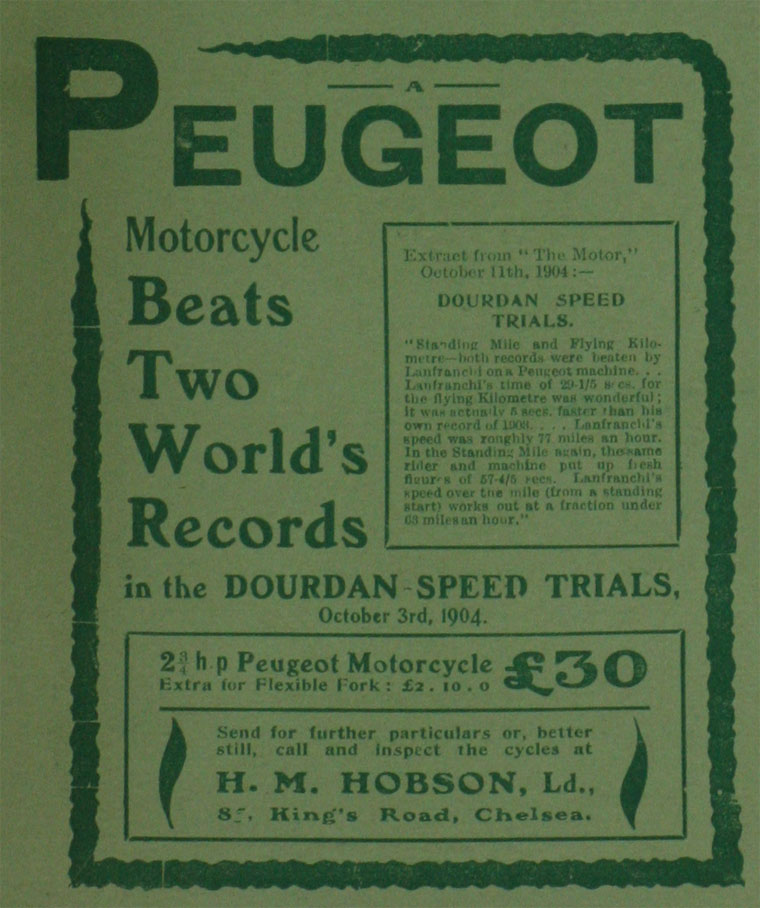 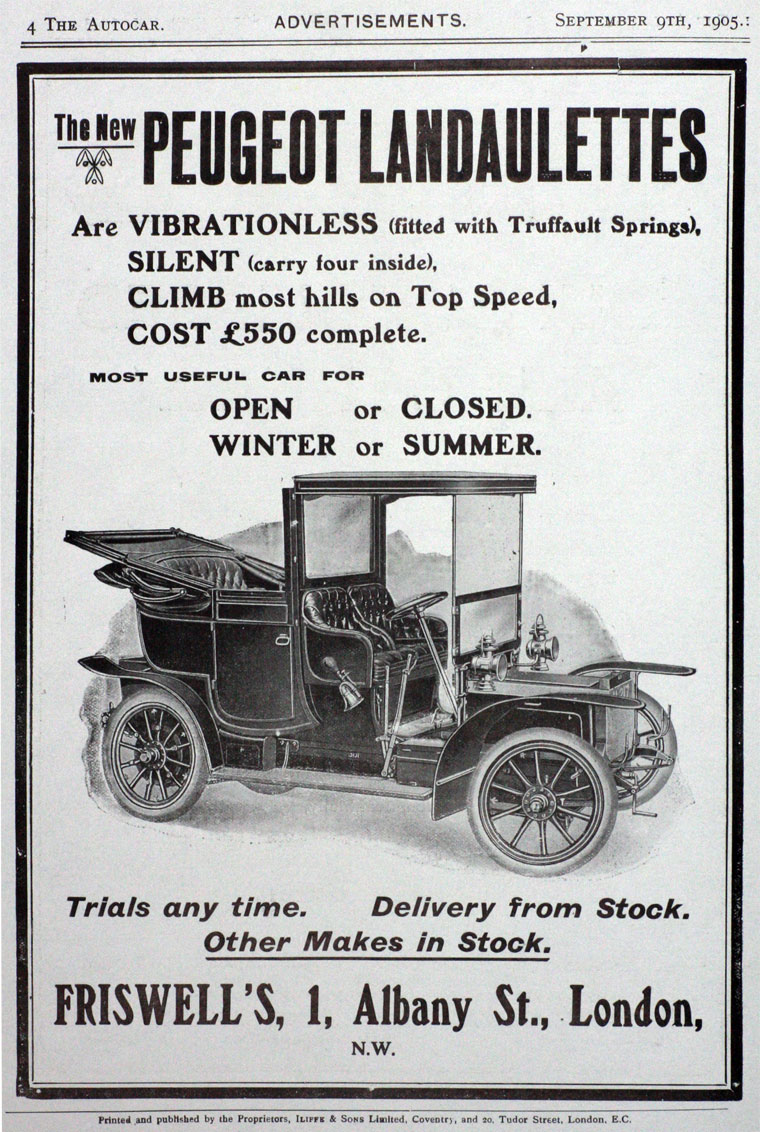 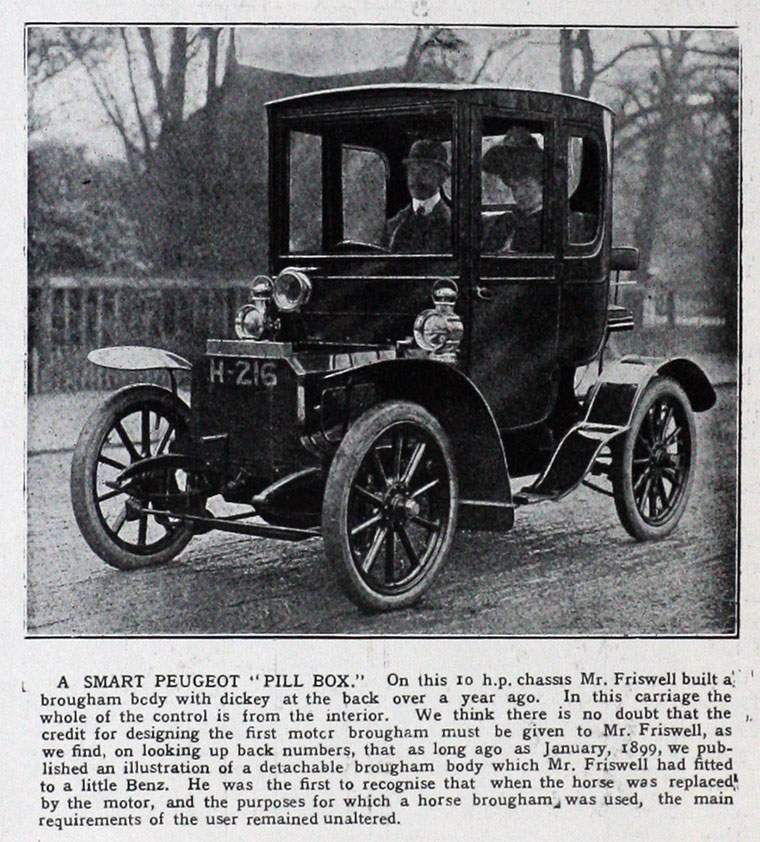 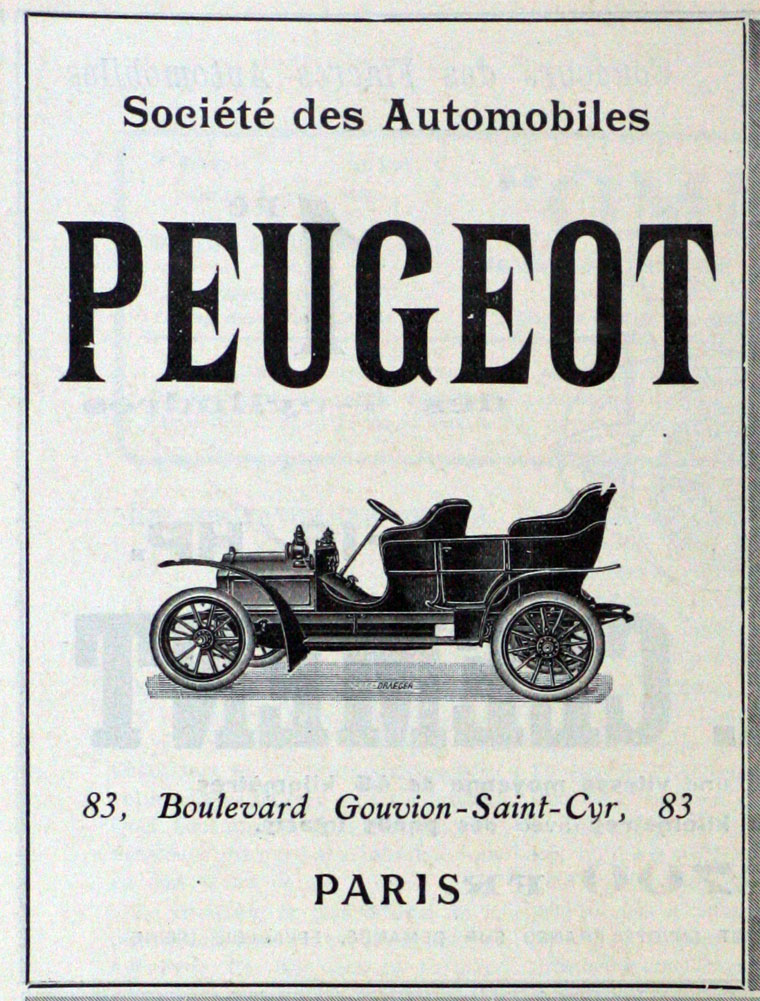 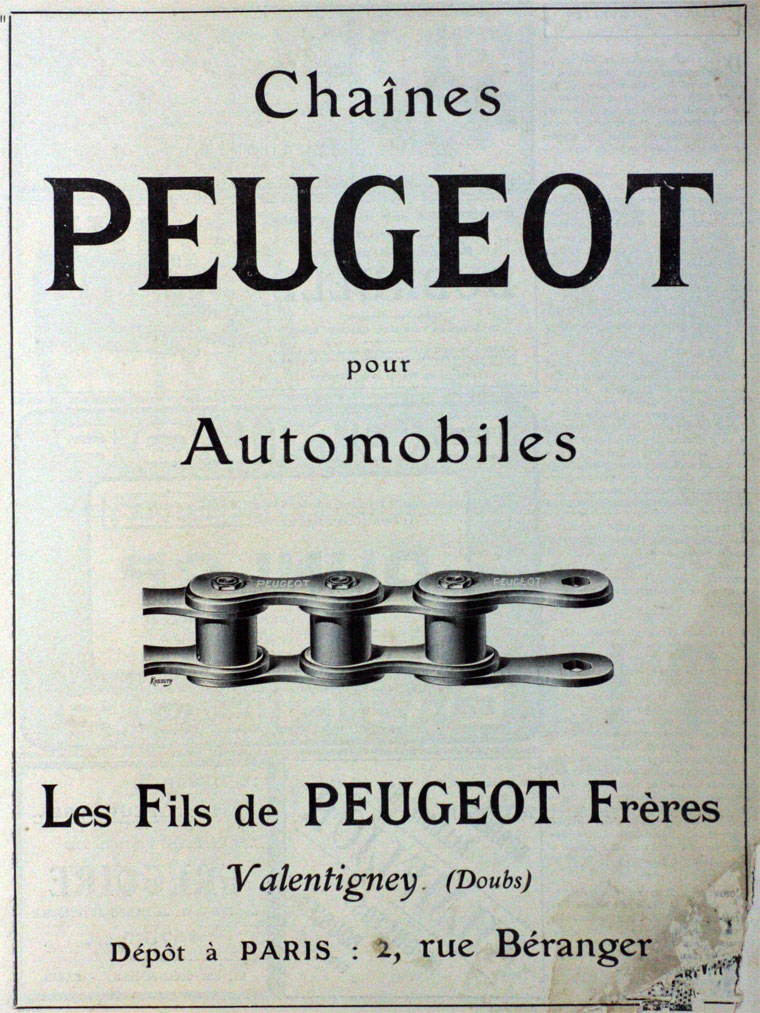 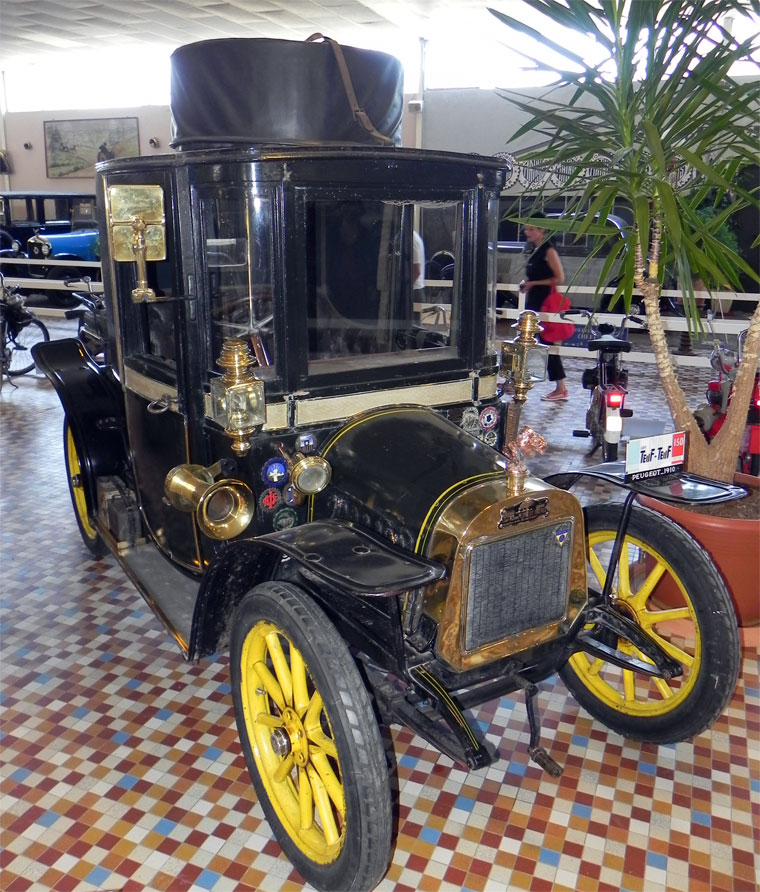 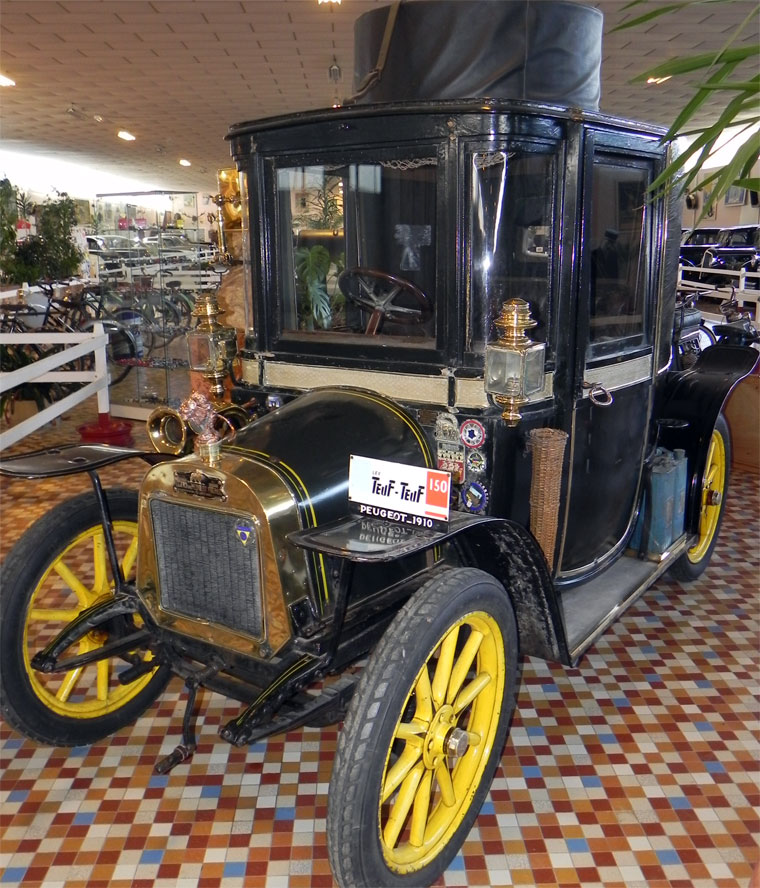 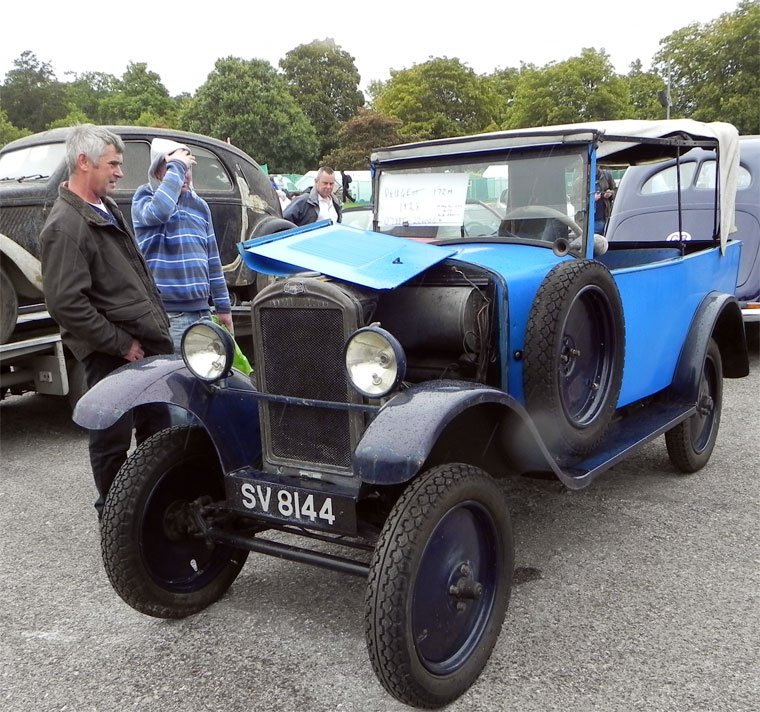 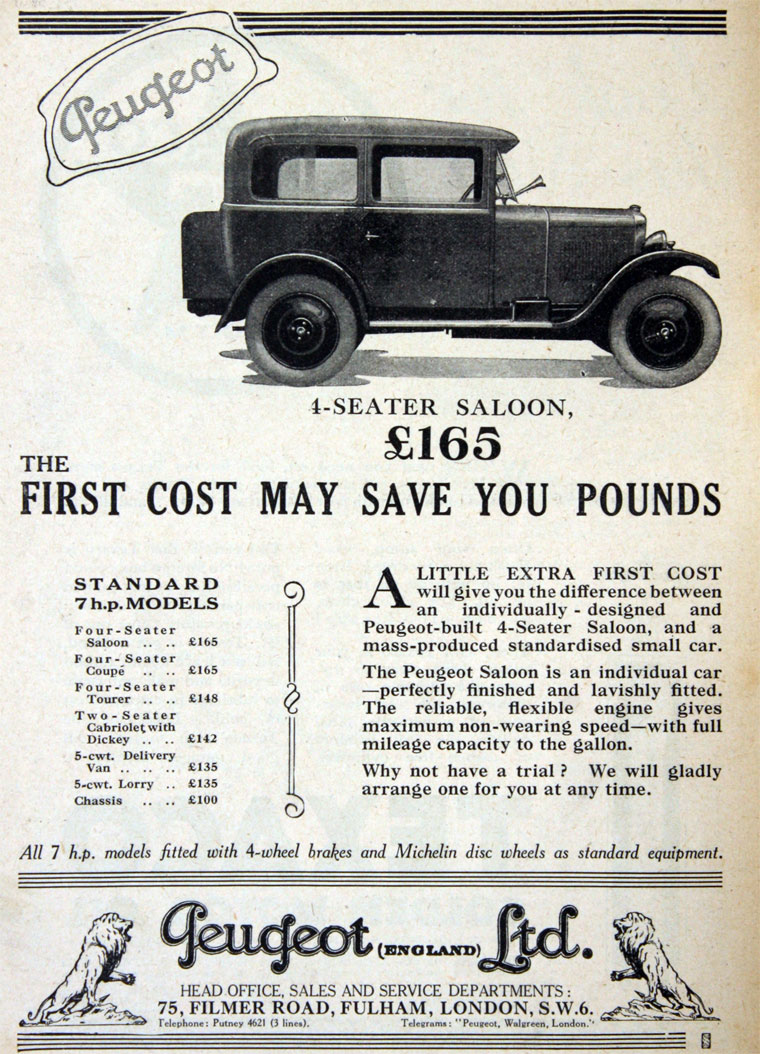 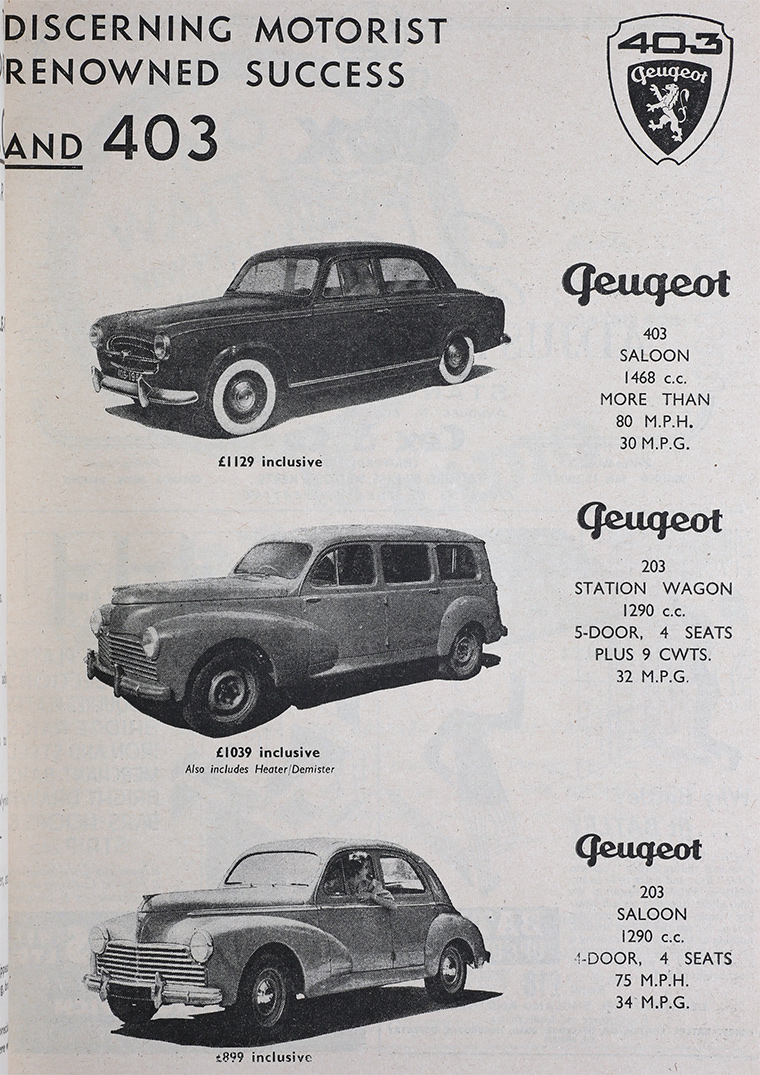 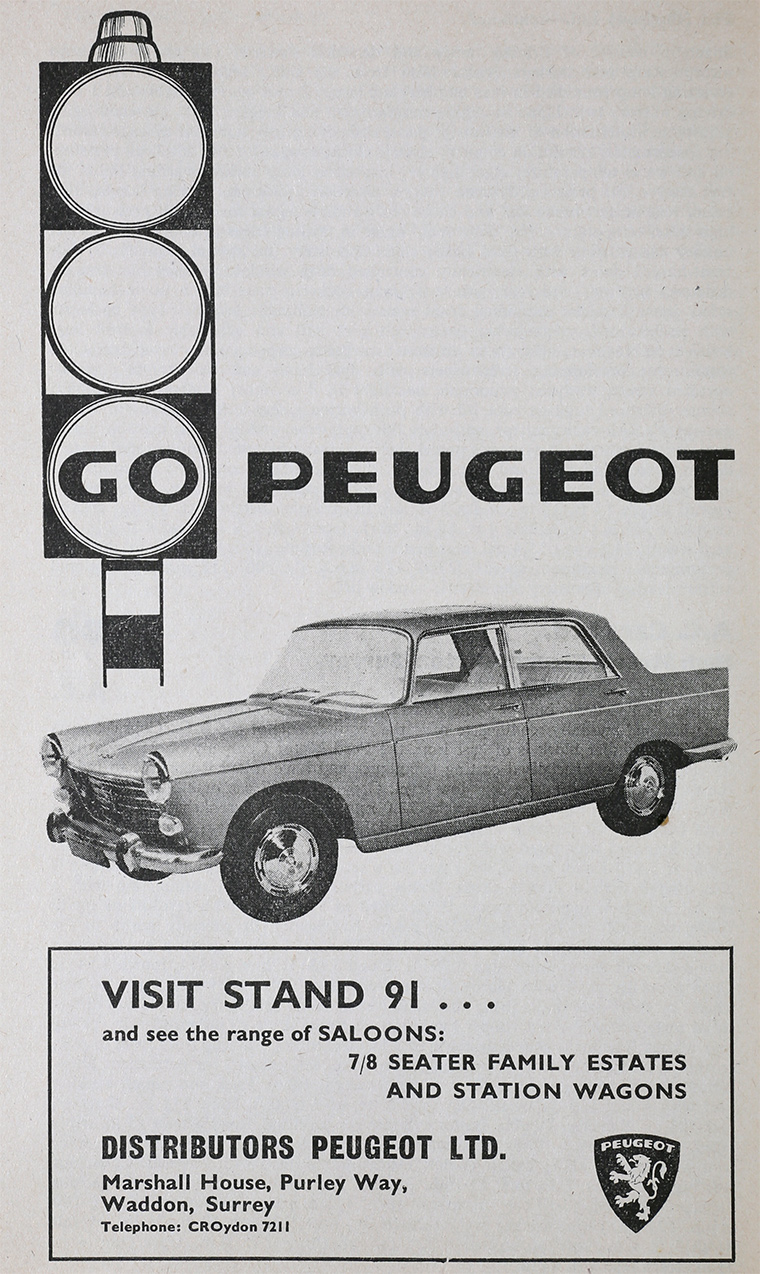 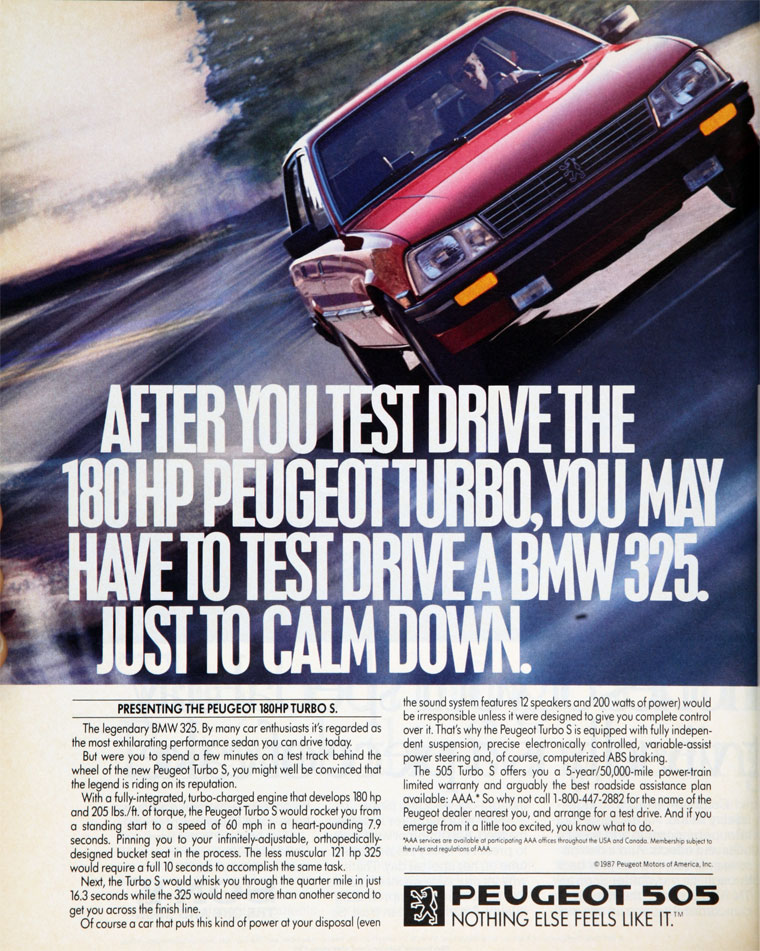 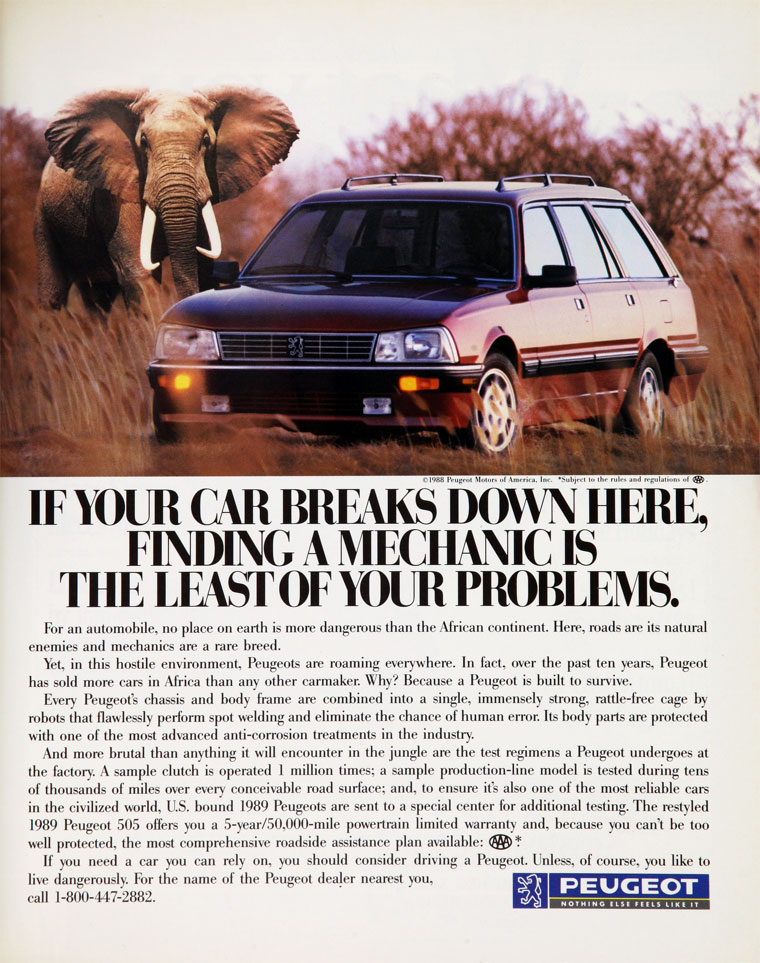 Note: This is a sub-section of Peugeot

Armand Peugeot became very interested in the automobile early on, and after meeting with Gottlieb Daimler and others was convinced of its viability. The first Peugeot automobile (a three-wheeled steam-powered car) was produced in 1889, in collaboration with Léon Serpollet. Steam power was heavy and bulky and required lengthy preparation before running, so it was soon abandoned in favour of the petrol-fuelled internal combustion engine.

1890 saw the first such vehicle, powered by a Daimler engine and with four wheels.

Further cars followed, twenty-nine being built in 1892. These early models were given Type numbers with the Type 12, for example, dating from 1895. Peugeot became the first manufacturer to fit rubber tyres to a petrol-powered car that year (solid tyres; pneumatic would follow in 1895). The vehicles were still very much horseless carriages in appearance and were steered by tiller.

1896 saw the first Peugeot engines built and fitted to the Type 15; no longer were they reliant on Daimler. Further improvements followed: the engine moved to the front on the Type 48 and was soon under a hood (bonnet) at the front of the car, instead of hidden underneath; the steering wheel was adopted on the Type 36; and they began to look more like the modern car.

1896 Armand Peugeot broke away from the family firm of Les Fils de Peugeot Frères and formed his own company, Société Anonyme des Automobiles Peugeot and built a new factory at Audincourt.

Peugeot added a motorcycle to its range in 1903, and motorcycles have been built under the Peugeot name ever since.

During the first World War Peugeot turned largely to arms production, becoming a major manufacturer of arms and military vehicles, from bicycles to tanks and shells.

1926 The cycle (pedal and motor) business separate to form Cycles Peugeot -- the consistently profitable cycle division seeking to free itself from the rather more boom-and-bust auto business.