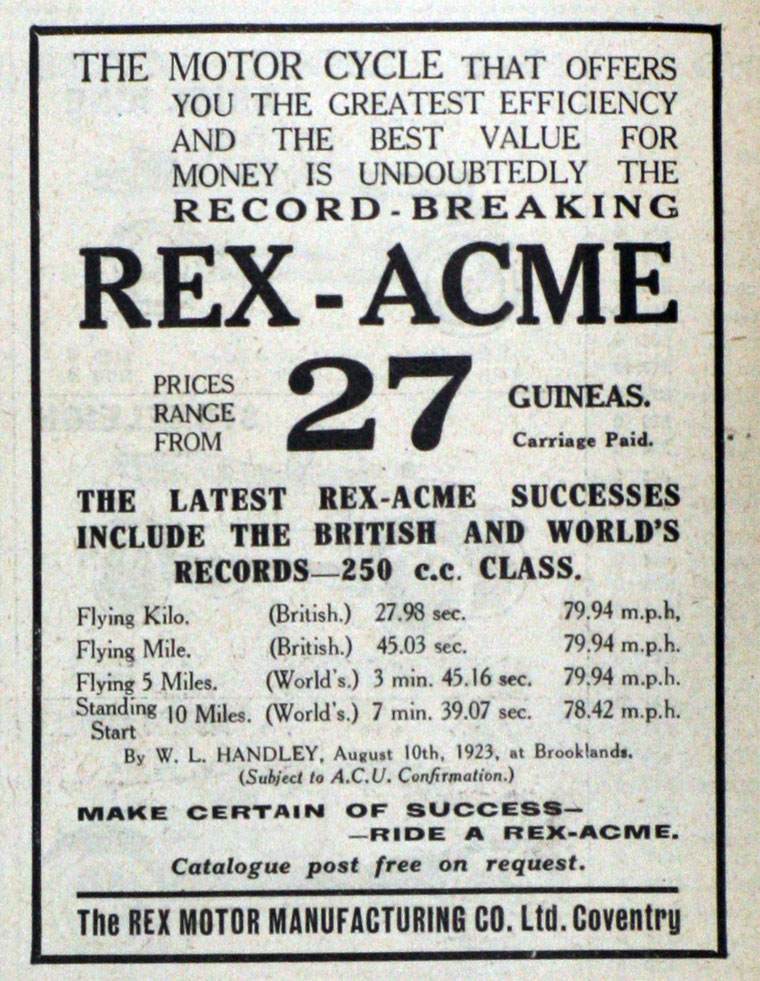 Rex-Acme Motor Manufacturing Co produced motorcycles in Coventry, from 1921 to 1933.

1921 The company arose from the amalgamation between Rex Motor Manufacturing Co and Acme Motor Co in 1921.

1921 A new marque was started with a lightweight model. This was either single or two-speed with a two-stroke Morris engine. They also produced a JAP or Blackburne four-stroke. Unusually, there was also the adoption of the locally made CAM engine with very large finning and a detachable head.

1922 Brought the introduction of a miniature with a 170cc two-stroke engine. It shared many similarities with the Hobart and Wee MacGregor machines.

1924 Rex-Acme motorcycles were successfully raced at the Belgium and Ulster Grand Prix. They also unveiled 250cc and 350cc ohv models with Blackburne engines (see Rex-Acme-Blackburne). Walter Handley, who was one of the best riders and tuners of the times, guided the company in its racing exploits. He later became Works Manager at the Earlsdon factory.

1926 Handley's strong influence saw the arrival of a wider range, with many options available. A new four-stroke, with a 173cc ohv AKD engine and Albion three-speed gearbox, replaced the miniature two-stroke.

1927 There were good results at the TT, when Handley won the Lightweight; as well as the world one-hour record - 91.21 miles covered in the sixty minutes.

1929 The depression was approaching, Handley had moved on and Rex-Acme was in the doldrums. In an effort to turn things around they produced a plethora of models and there were at least seventeen different ones on offer that year.

The depression years. Rex-Acme still offered their full list plus a range of others using Villiers, Blackburne, JAP and Sturmey-Archer engines, as well as a speedway model.

1931 A further range was announced, including one with a Rudge Python engine, but it was never built as production came to an end.

1932 The name had been bought by sidecar manufacturer Mills-Fulford, who launched models using JAP engines.