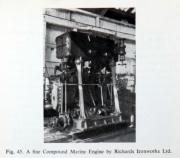 1876 Founded by Samuel Richards to build sailing drifters. Company was S. Richards and Co. It was based in a boatyard on the south side of the inner harbour at Lowestoft in Suffolk. It began its career by building wooden drifters.

1919 Richards died; by this time over two hundred wooden drifters had been built. Richard's sons took over the running of the yard and the company continued making drifters and deep sea trawlers along with paddle steamers.

1920s After making a series of motor trawlers and their first motor drifter, the yard closed for four years from 1926-30.

1930 The last steam engine was produced

1930s The yard was bought up by W. F. Cockerell of the East Anglian Ice and Cold Storage Co and he renamed the business as Richards Ironworks.

1935 The yard restarted shipbuilding again, making motor trawlers and then barges and a lightship. The yard also continued shiprepairing.

WWII The yard escaped any serious bombing and managed to complete 85 small ships and repaired hundreds of other craft. In addition, the yard made motor minesweepers and 24 motor fishing vessels and a torpedo recovery ship for the Admiralty. There were also a further eight standard coasters and six "VIC" type Clyde puffers made for the Admiralty during this time.

1954 The yard expanded by taking over an adjoining shipyard. It was also bought up by United Molasses Co who spent some time and £250,000 modernising the facilities there. It was at this point that the Lowestoft yard was renamed Richards (Shipbuilders) Ltd.