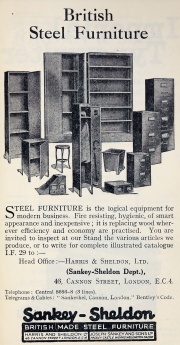 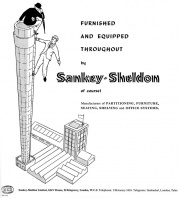 If it was made out of metal, Sankeys made it. One part of the company was Sankey-Sheldon steel office furniture, a joint venture with H. and S. (Holdings). Later Sankeys became part of the GKN Group.

1910 Sankeys acquired the Castle Works, Hadley, Wellington and switched all their automotive-related production to that site. It was there that the company also developed Sankey-Sheldon office furniture and produced agricultural implements. Sankeys were diversifying into such things as filing cabinets, and were keeping up with newer developments by producing goods for the electrical trades, as well as vehicle wheels and brake drums.

1920 Guest Keen Nettlefold acquired the whole of the ordinary shares of Sankeys [1]. The Sankeys companies maintained their names as subsidiaries of GKN for many years.

1923 Sankey-Sheldon fire-proof cabinets and other steel furniture were advertised jointly by Harris and Sheldon of 46 Cannon St, London, and Joseph Sankey and Sons of Hadley Castle Works of Wellington, Salop[2]

c.1948 Joint venture, Sankey-Sheldon, was formed so that the Sankey company controlled the selling as well as the manufacture of metal furniture[4]

1949 Joseph Sankey and Sons acquired from H. and S. (Holdings) Ltd their interests in the joint venture Sankey-Sheldon, maker of metal furniture[5]

1954 Sankey's centenary was mentioned by the chairman of GKN in his address to the annual meeting[6]. Joseph Sankey Ltd's works at Albert Street, Manor and Bankfield, and at Hadley Castle had experienced differing levels of business; Sankey-Sheldon Ltd had had a reasonable year.

1961 Manufacturers and dealers in steel and other furniture, including chairs, filing and office equipment, partitioning and shelving. [7]

1965 Some Sankey companies had been rebadged GKN Sankey, an ongoing trend [8].

Sankeys no longer exist in Bilston. Their local demise was a part of the collapse of manufacturing industry in the 1980s. The Morrisons superstore now stands on part of the old Sankey site.