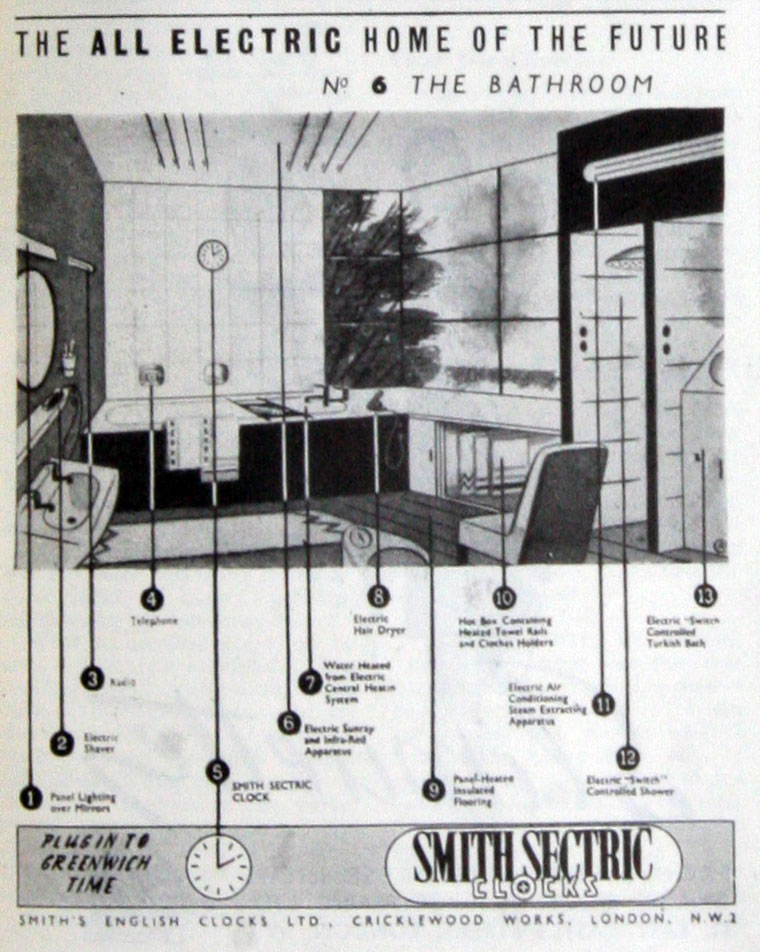 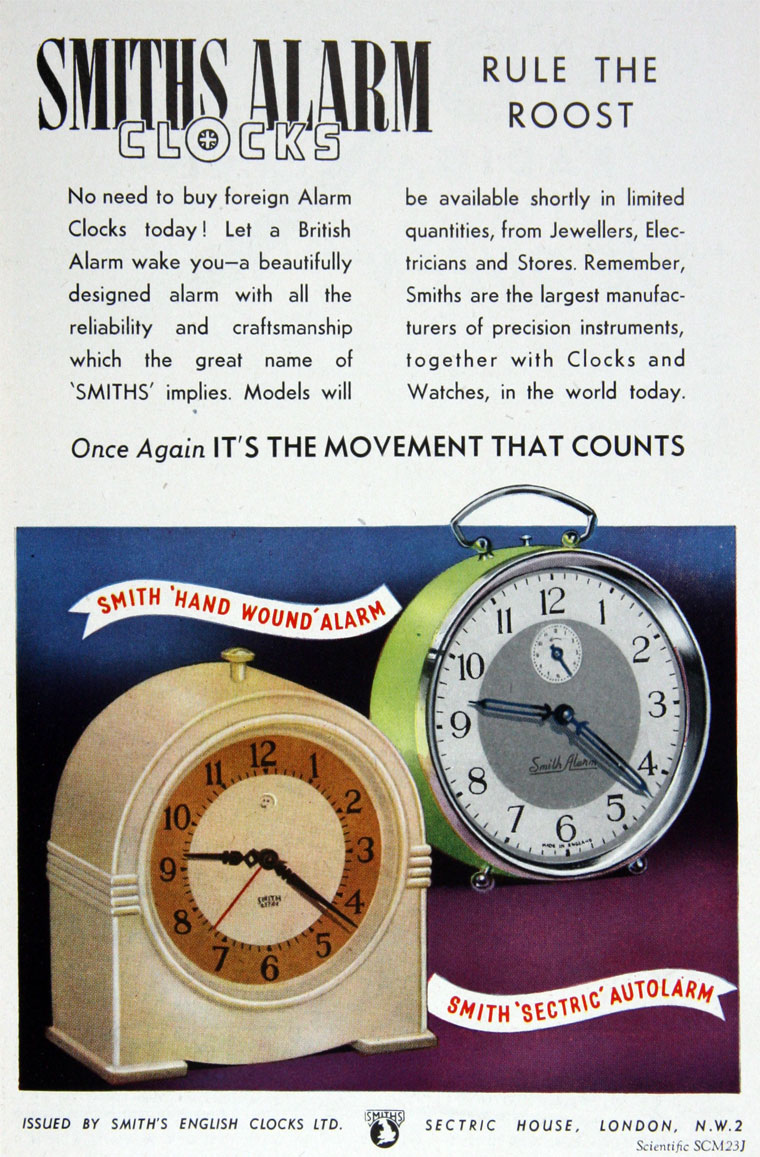 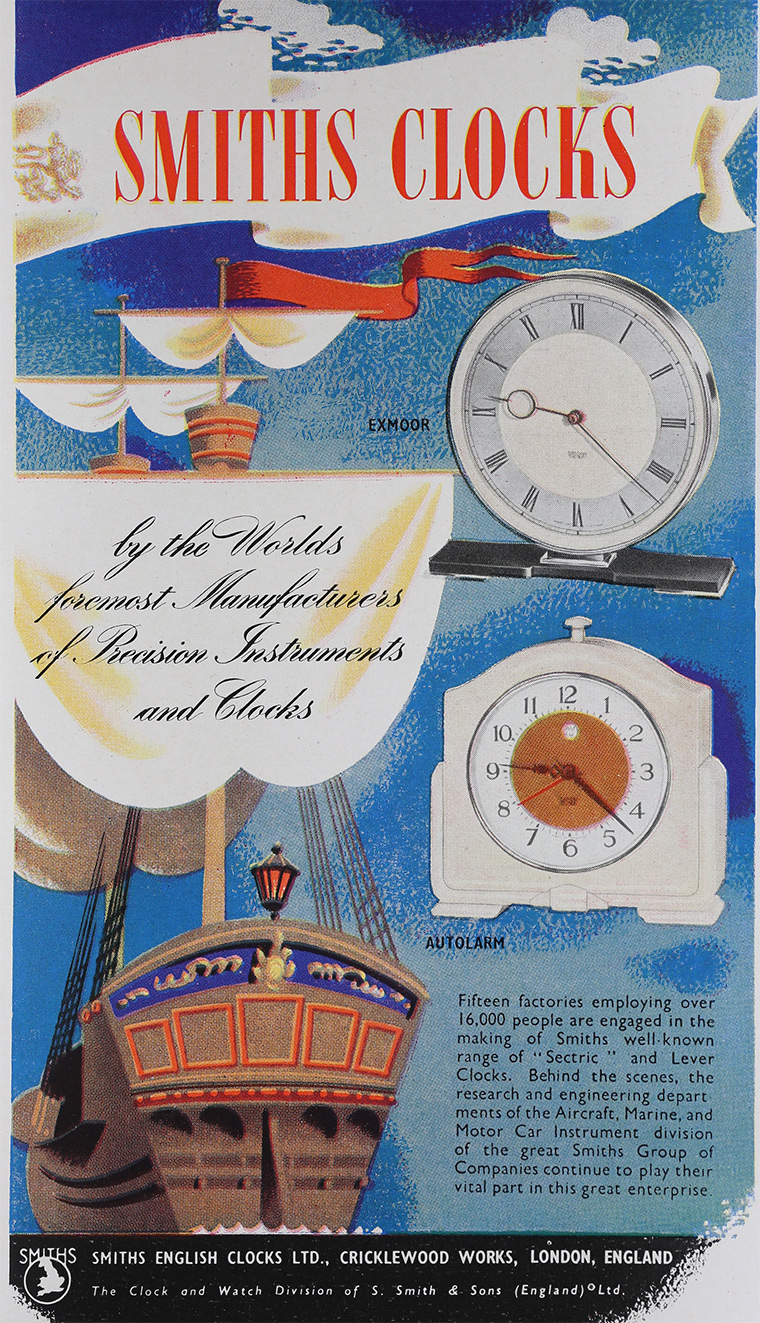 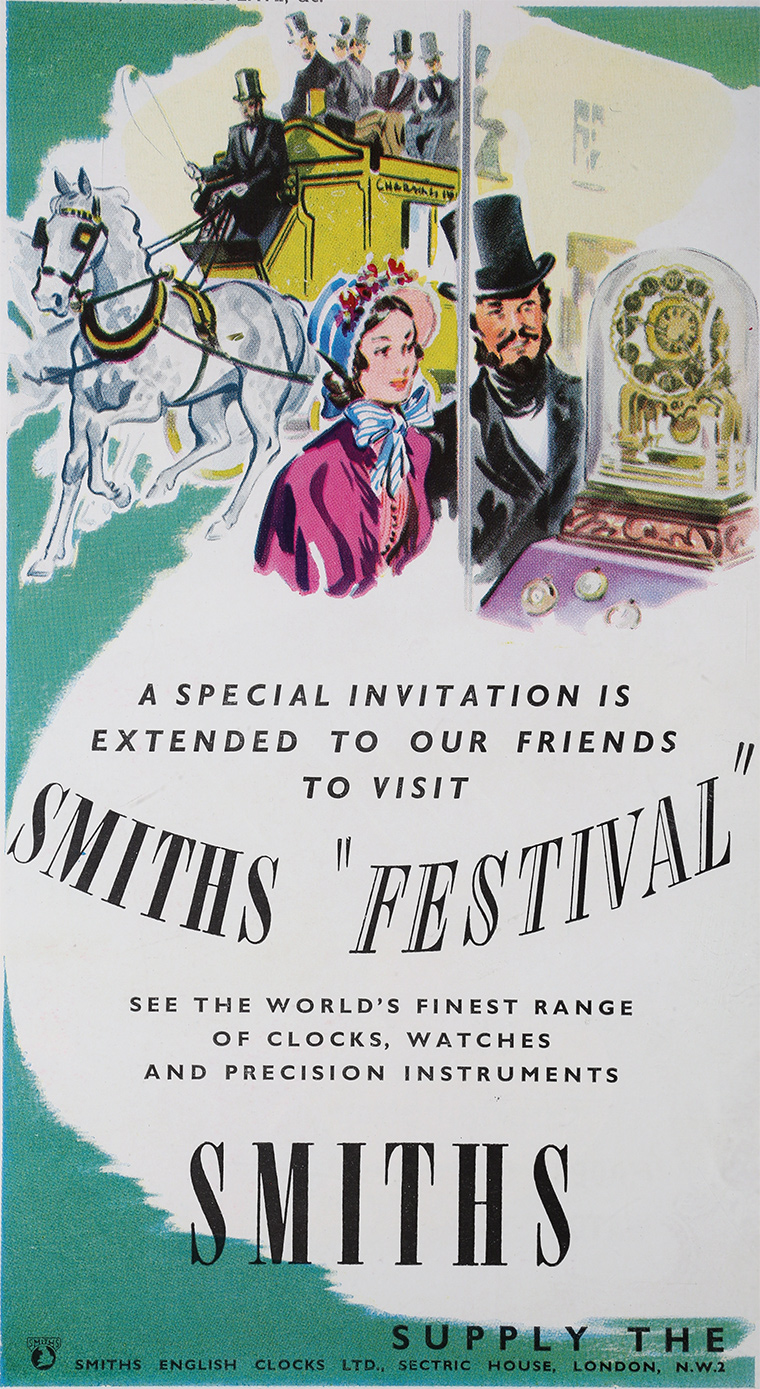 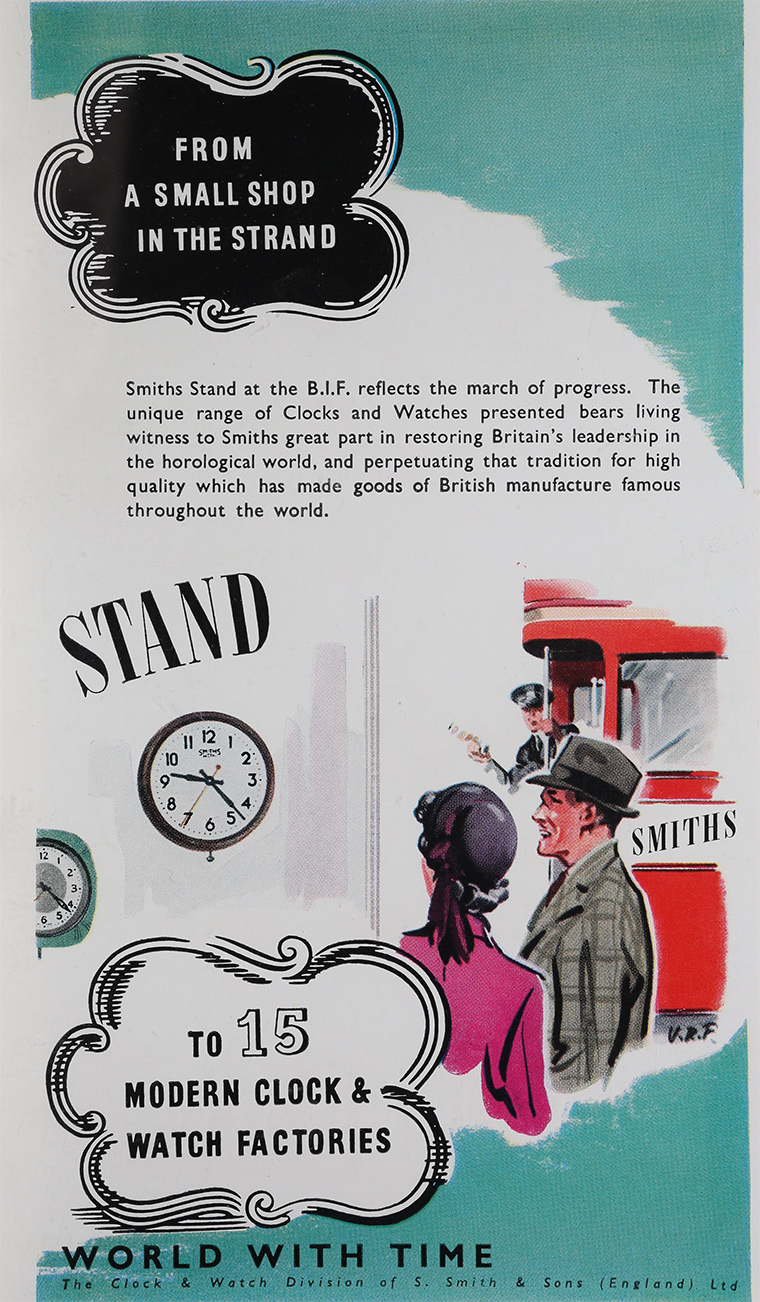 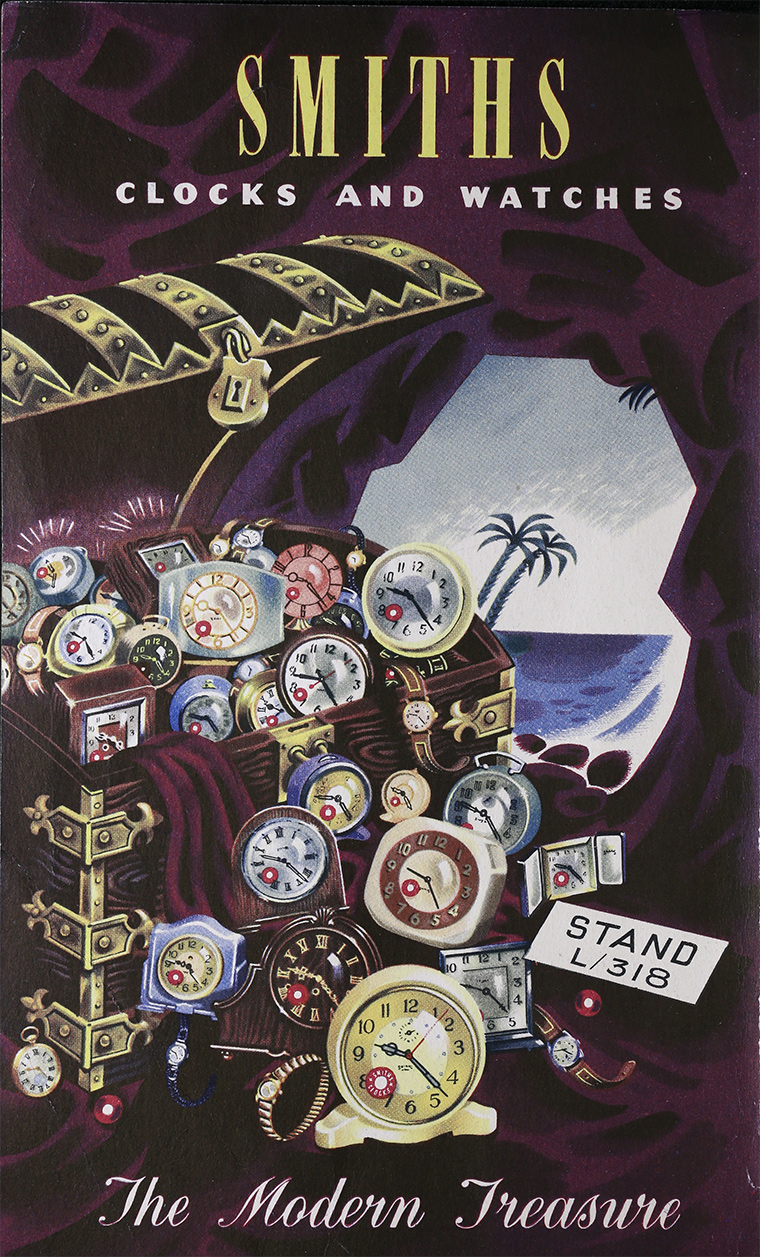 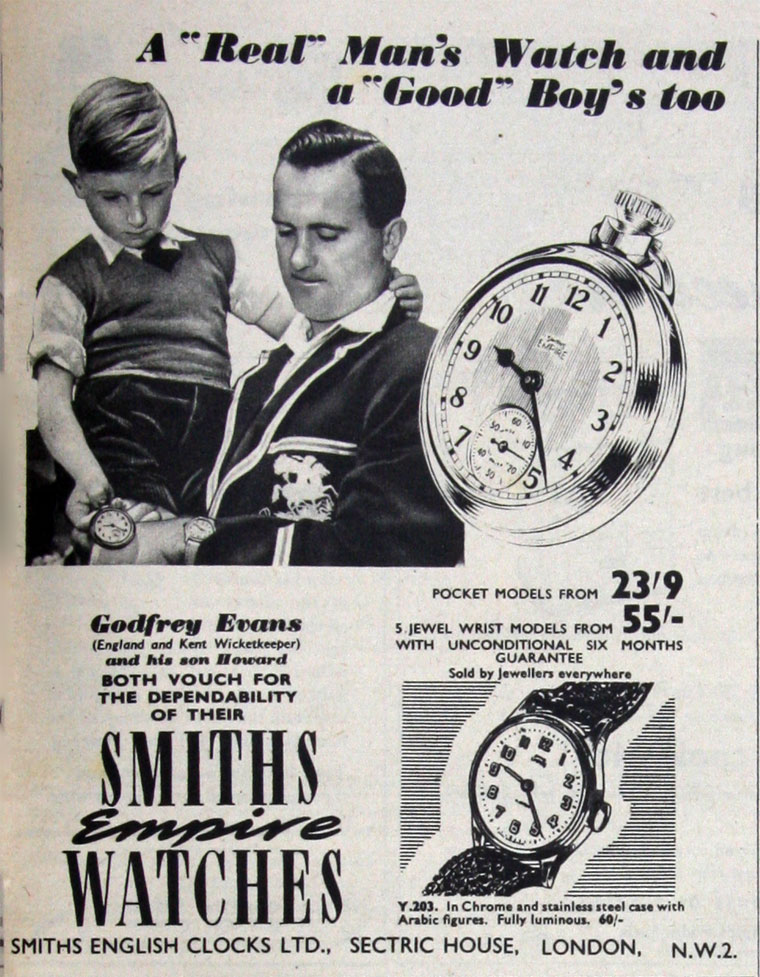 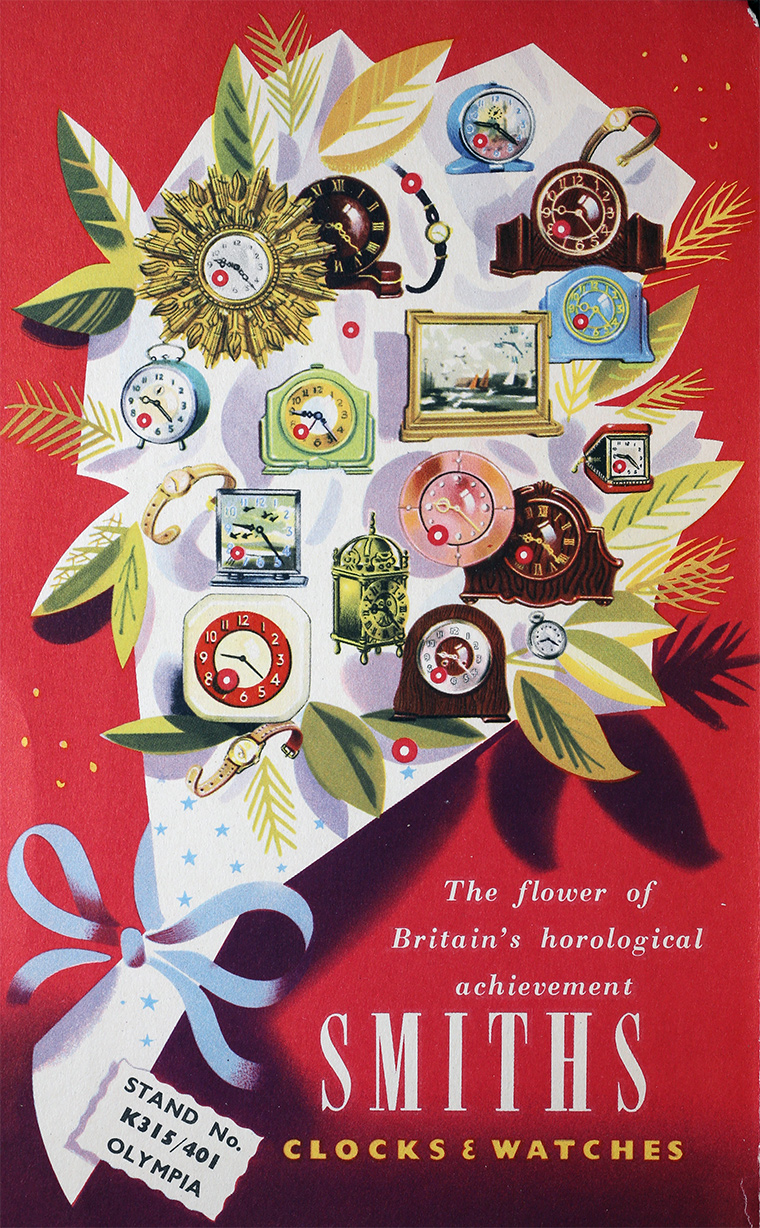 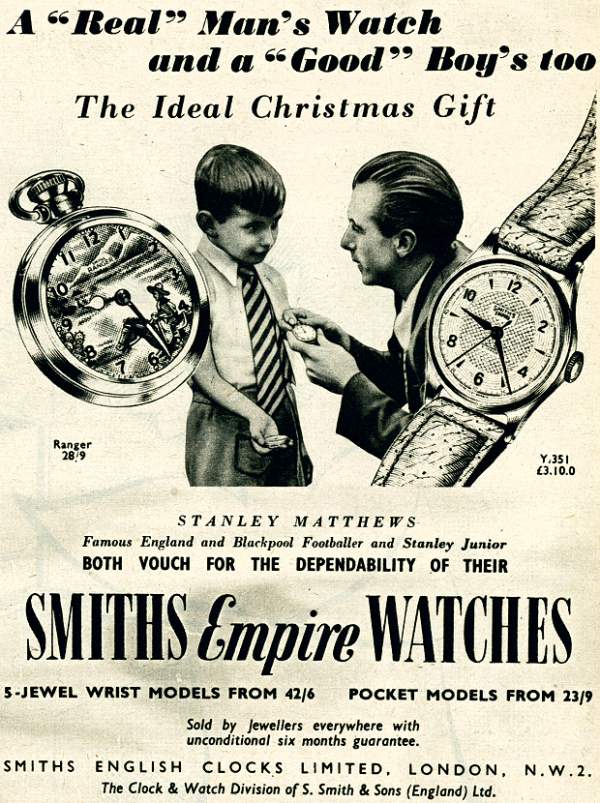 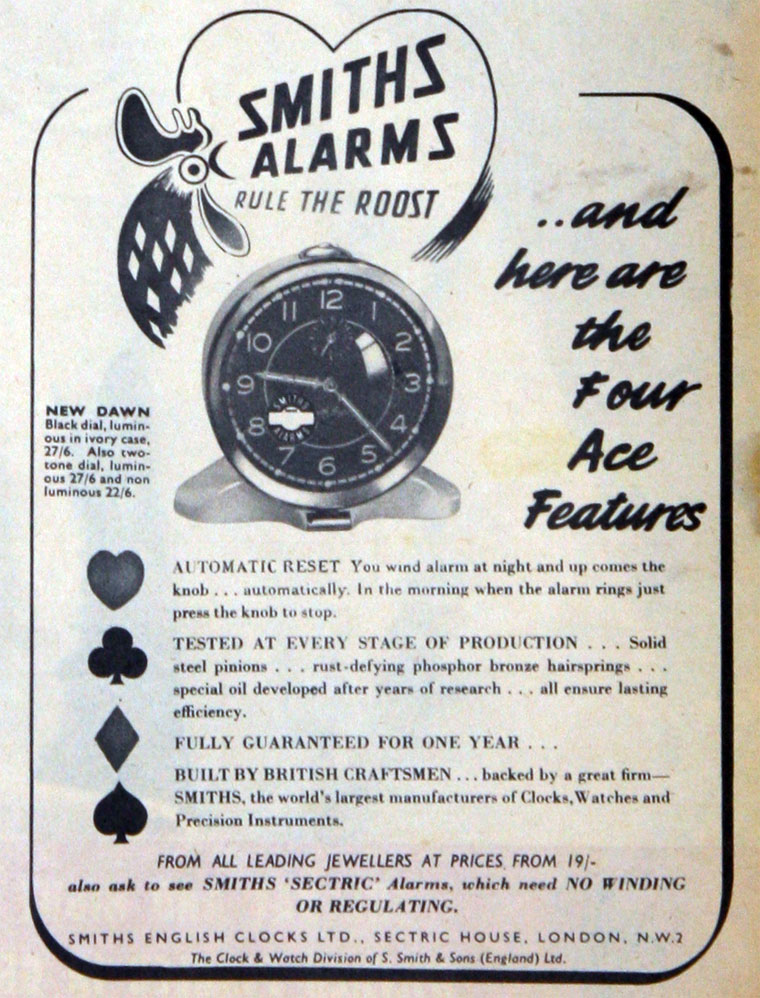 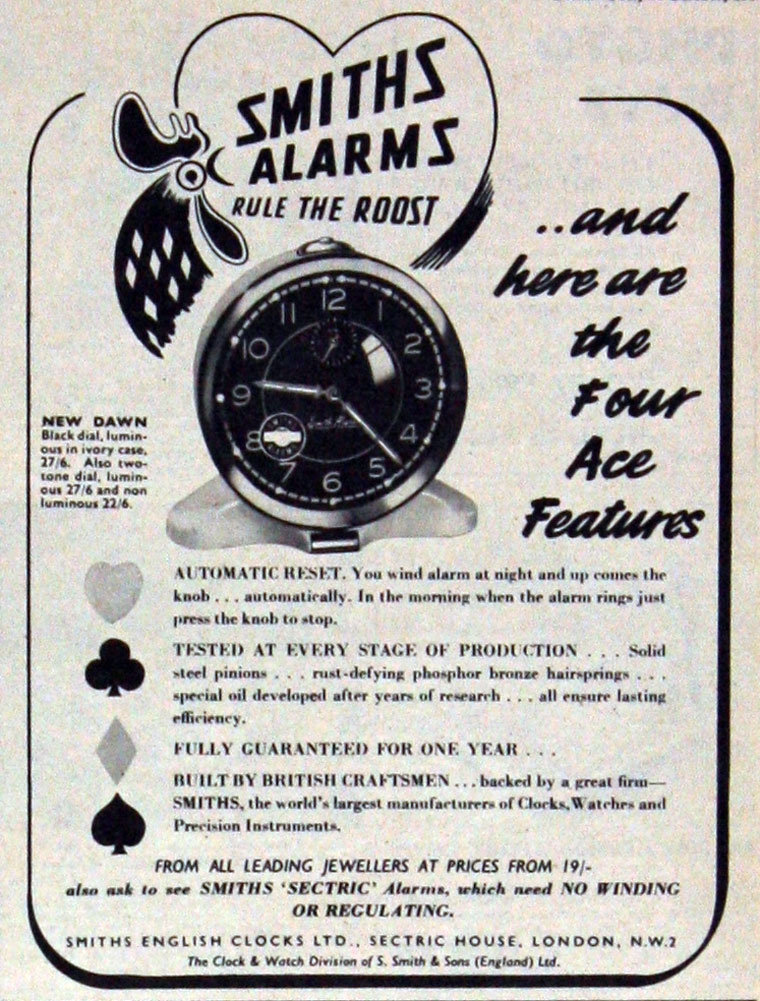 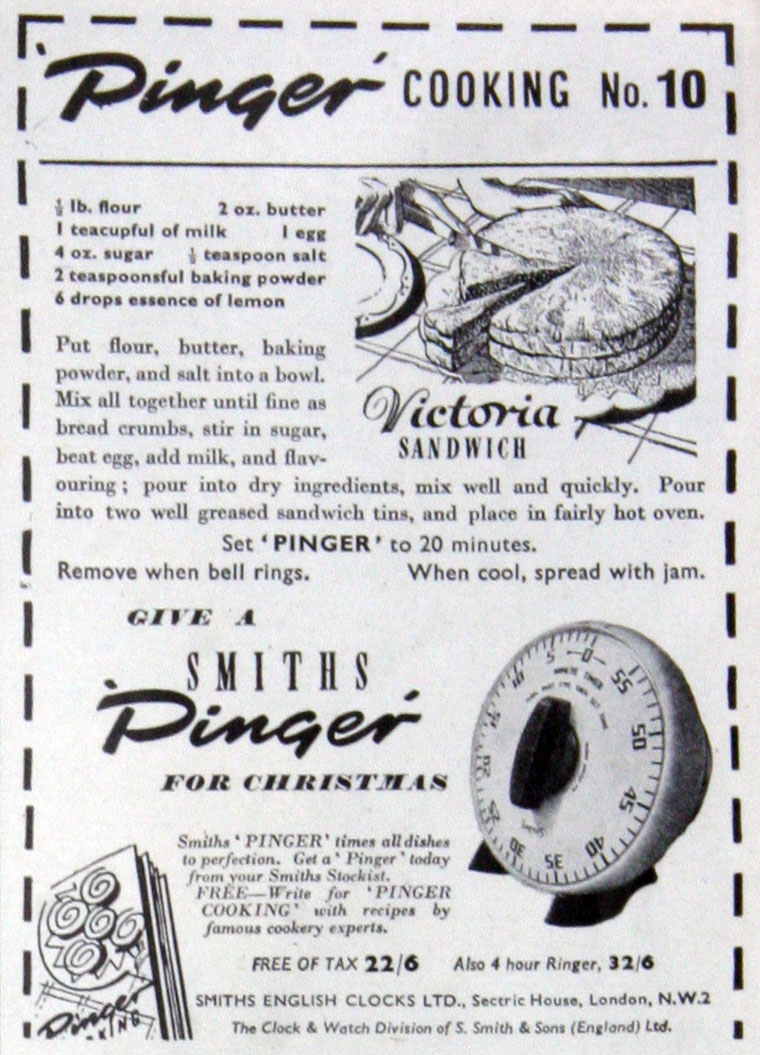 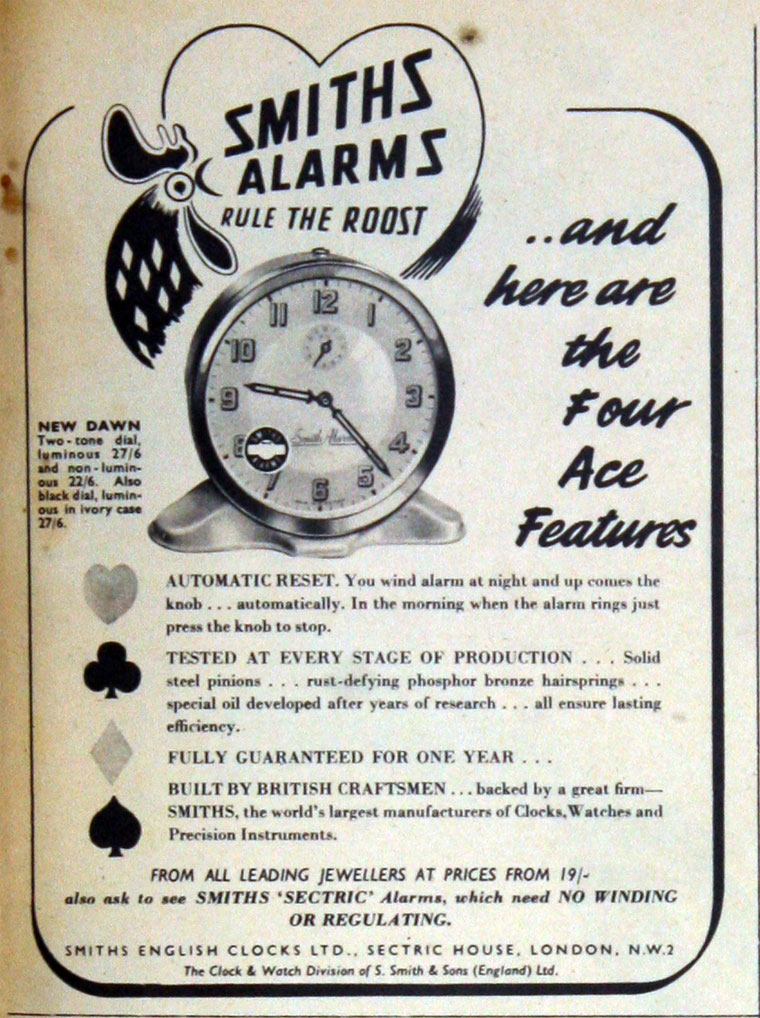 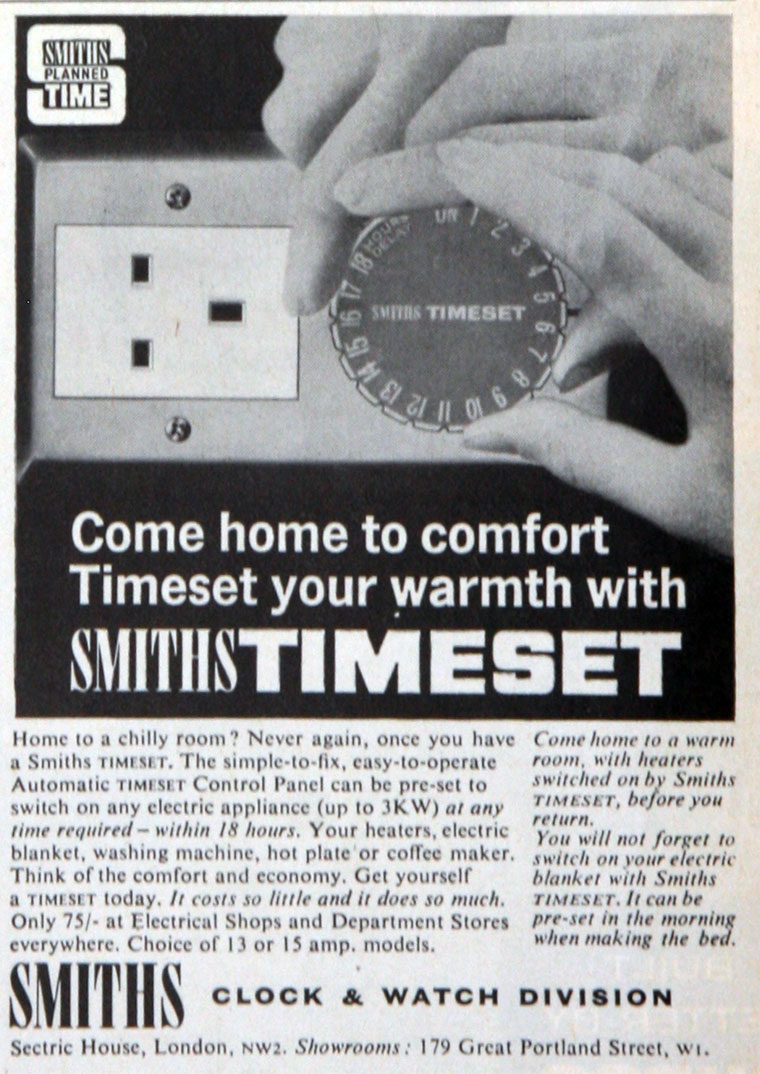 1931 Smiths, then called S. Smith and Sons (Motor Accessories) Ltd, entered the domestic clock market and formed a new company, Smiths English Clocks Ltd, as the Clock and Watch division with Cricklewood as the main factory.

Smiths were one of the first companies to produce synchronous electric clocks. These were put on the market towards the end of 1931. Smiths formed a subsidiary company called Synchronous Electric Clocks to produce these clocks as the first models carry this name.

1934 Smiths produced a synchronous alarm clock which they named the Callboy.

1934 They bought the Enfield Clock Co.

The Smith's 8 day Calotte clock made its debut at the British Industries Fair in 1934. Prior to this date calottes had been exclusively of foreign manufacture. Also that year, Smiths introduced the Batriclock which was intended for areas where the synchronous clock could not be used.

1935 They introduced the Synfinity, which Smiths described as "the clock that never stops". They said it was "the remarkable combination of a synchronous electric movement with the essential elements of a fine precision lever escapement". If the electric supply failed the clock would run for up to six hours and rewind when the power returned. Apparently the synchronous motor also corrected the mechanical time train at intervals. Smiths produced a synchronous electric chiming clock.

1937 The trade name Sectric appears on Smiths electric clocks. Also the introduction by Smith's of a calotte clock with an alarm movement.

After the regrouping the Clock and Watch division of the company, Smiths English Clocks Ltd consisted of the following main companies:

1945 The Cricklewood factory returned to clock production with new models of Synchronous clocks and a factory at Carfin (near Glasgow) was producing an alarm clock selling at less than a pound.

1949 Enfield had been taken over and allowed to continue production under its own name, but in 1949 production of Enfield "strikes " was moved from the Enfield factory at Edmonton to the Smiths factory at Ystradgynlais in Wales. The "chimes" production was moved a year or so later and Enfield ceased to be an entity, becoming just part of the Smiths Group, the only distinguishing feature being that movements from the Ystradgynlais factory were marked Smiths Enfield.

1951 A new factory for the manufacture of alarm clocks was opened at Wishaw as Carfin had become overcrowded.

c.1955 the name Smiths English Clocks was changed to Smiths Clocks and Watches.

1956 Smiths offered clocks with the new "floating balance" movement invented by Hettich in Germany and licensed to Smiths.

1960 They offered a smaller version to their own design, which was widely used as regulation was easy and precise. The floating balance had advantages over older escapements It is robust and less sensitive to disturbance, as for example when dusting, or to being out of level.

1962 In 1958 and 1959, Smiths patented moving coil clocks incorporating transistors, but did not put any models on the market until 1962 when they announced the Sectronic, which had a moving coil movement. This movement had three hairsprings which served to carry current to the coils.

1970 They introduced a range of clocks using the Tensator movement in which a special spring provides constant torque and potentially better timekeeping.

Throughout the 70s many more ranges were produced.

1979 Smiths ceased to produce clocks for the domestic market.