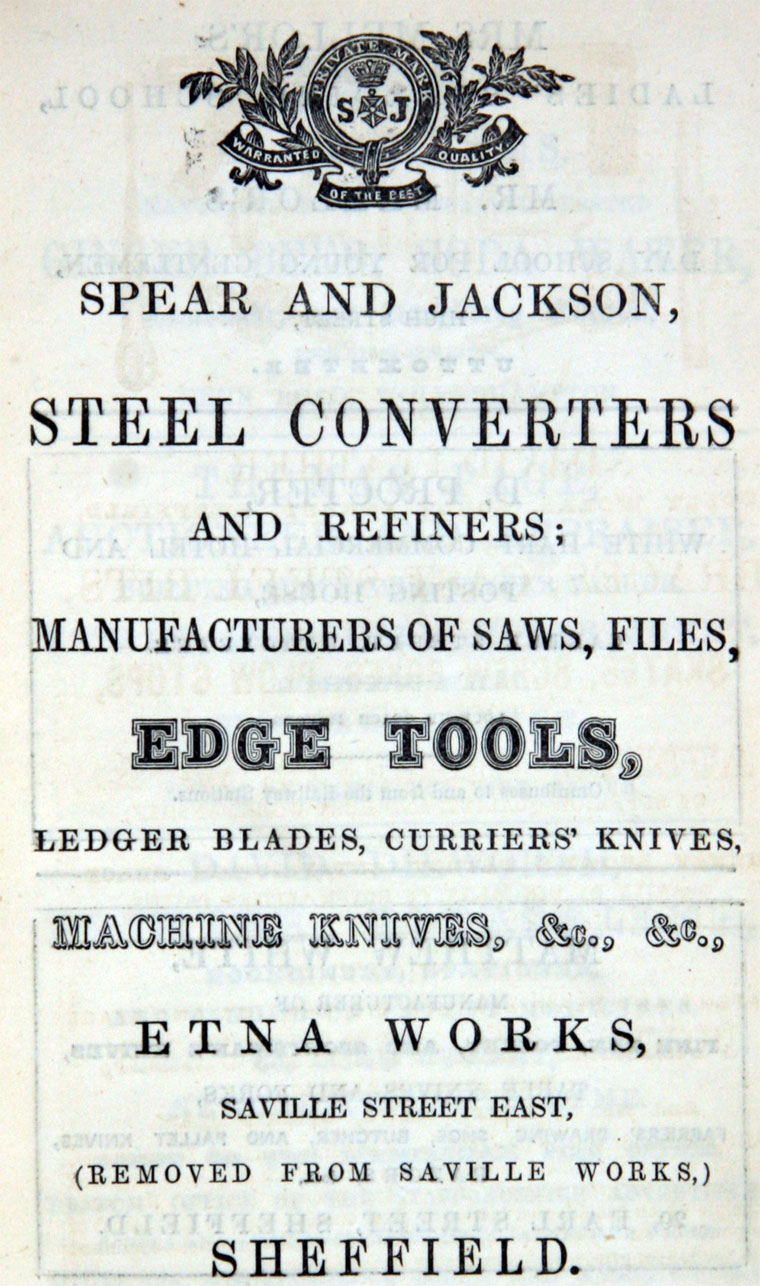 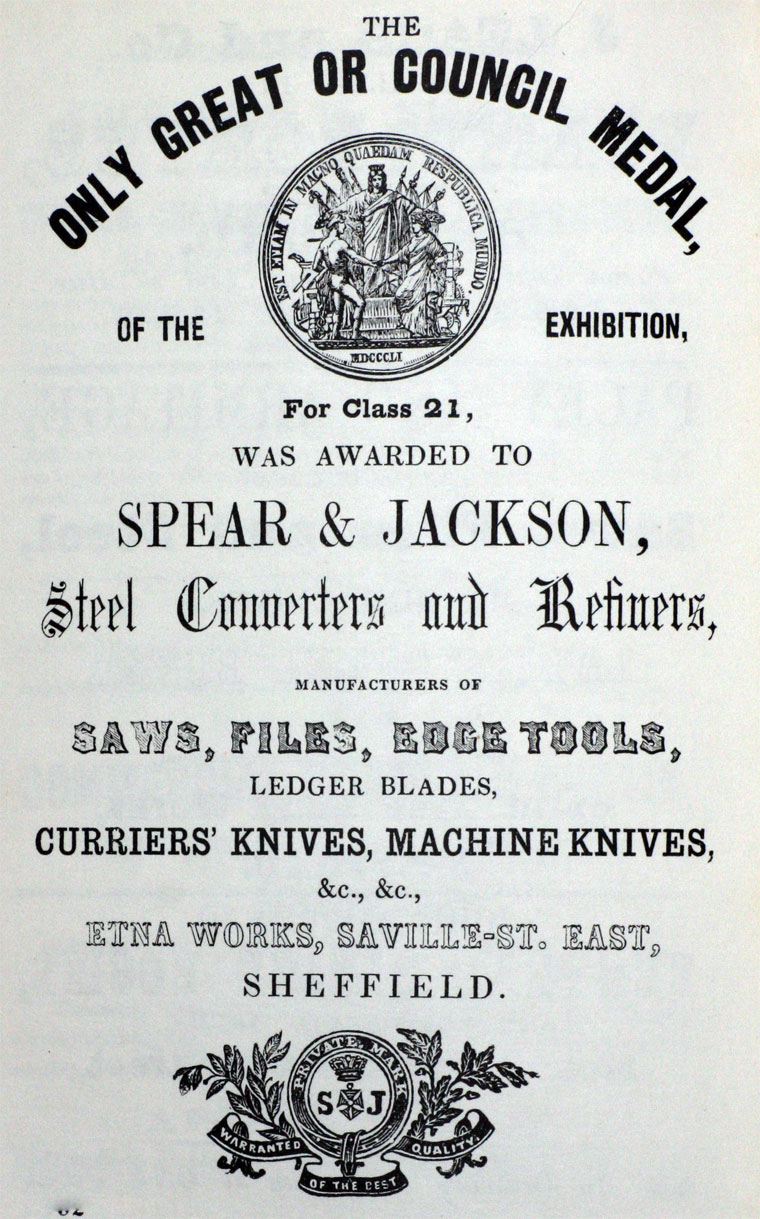 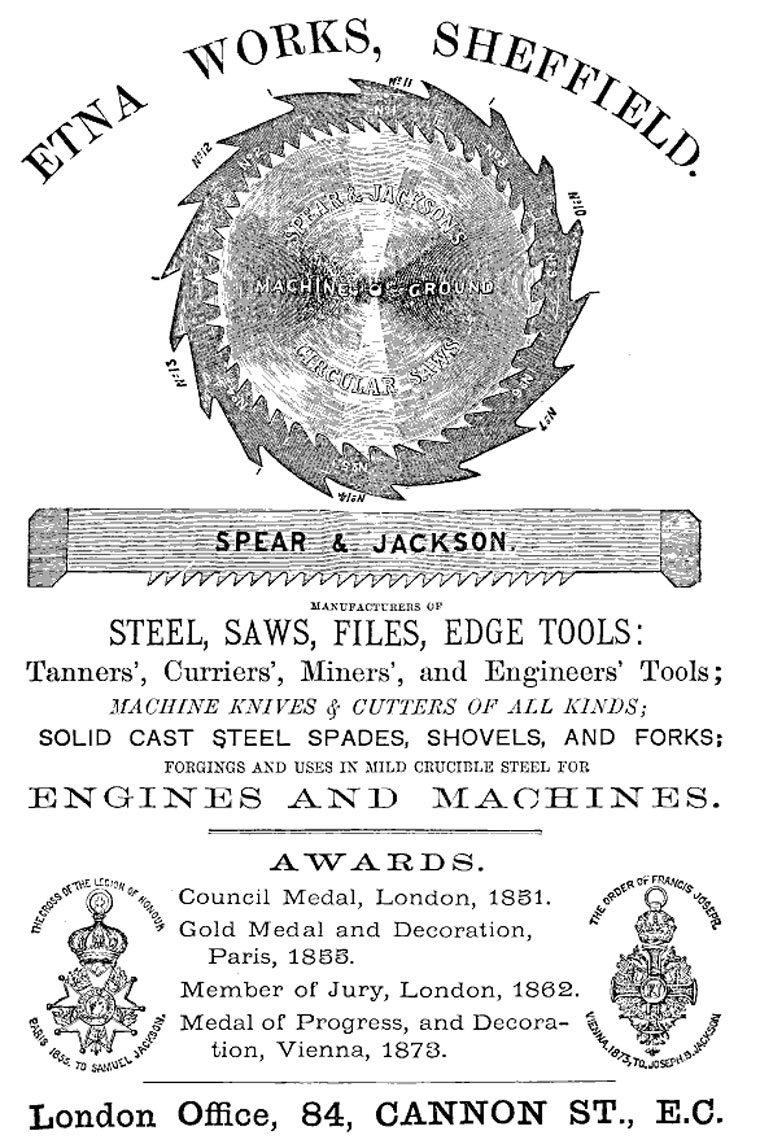 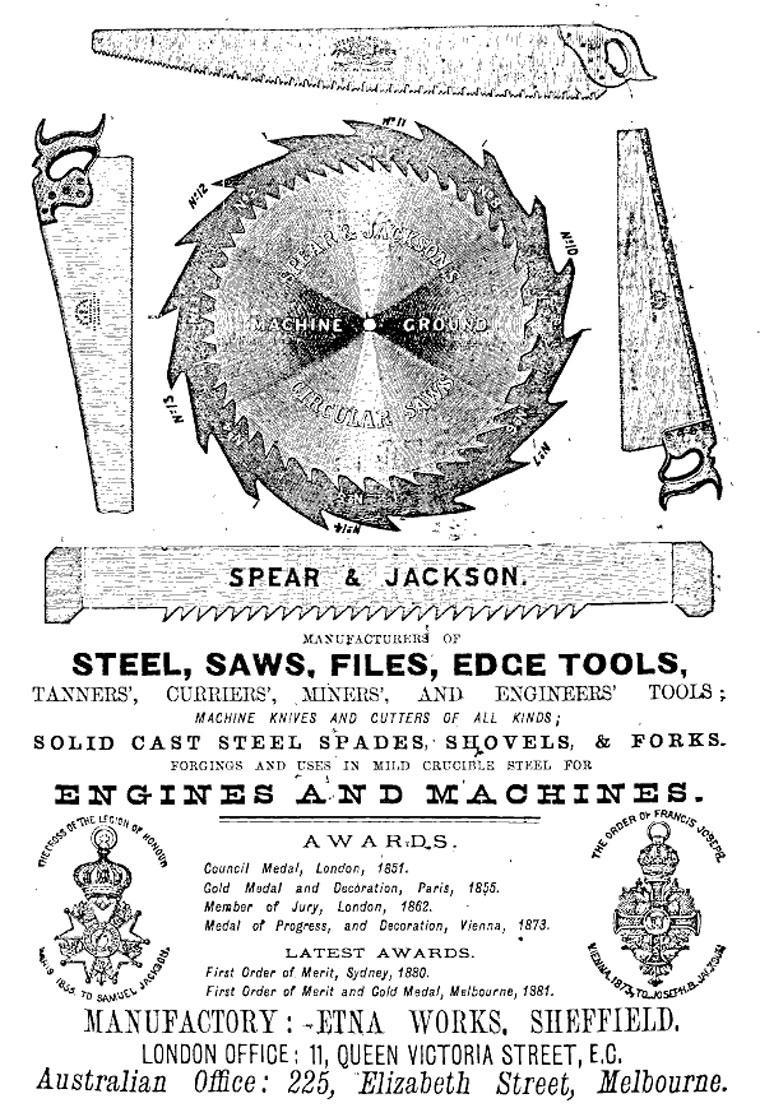 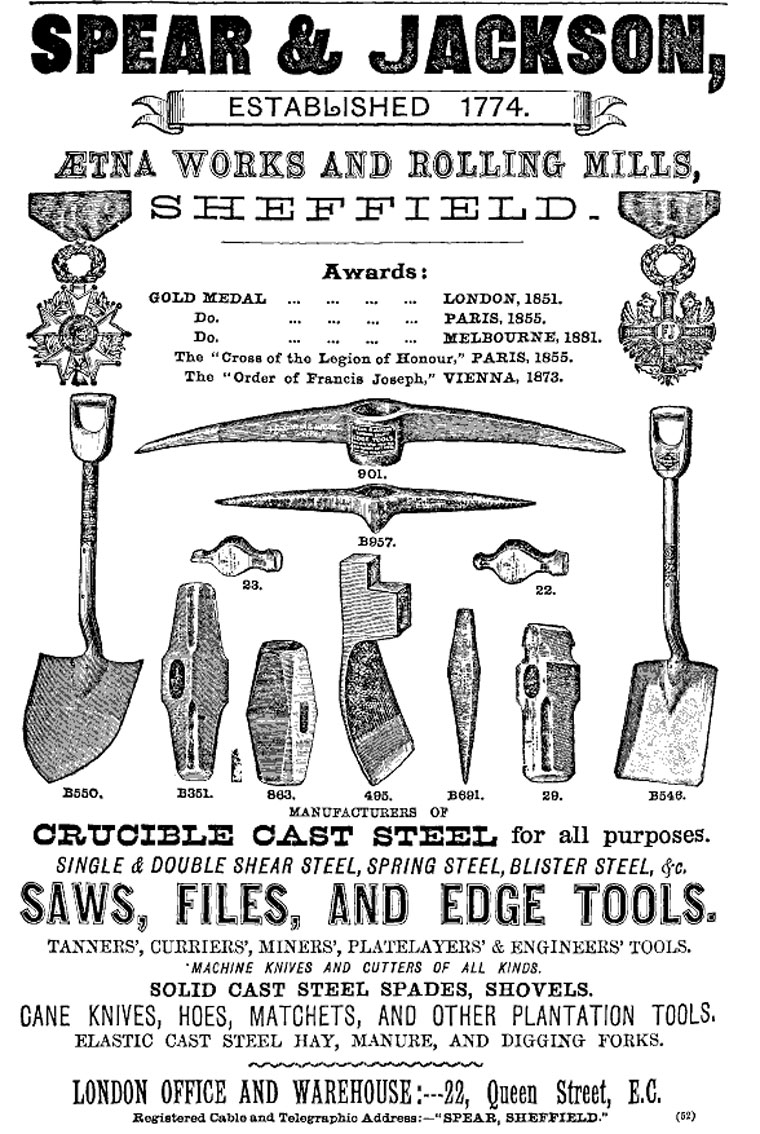 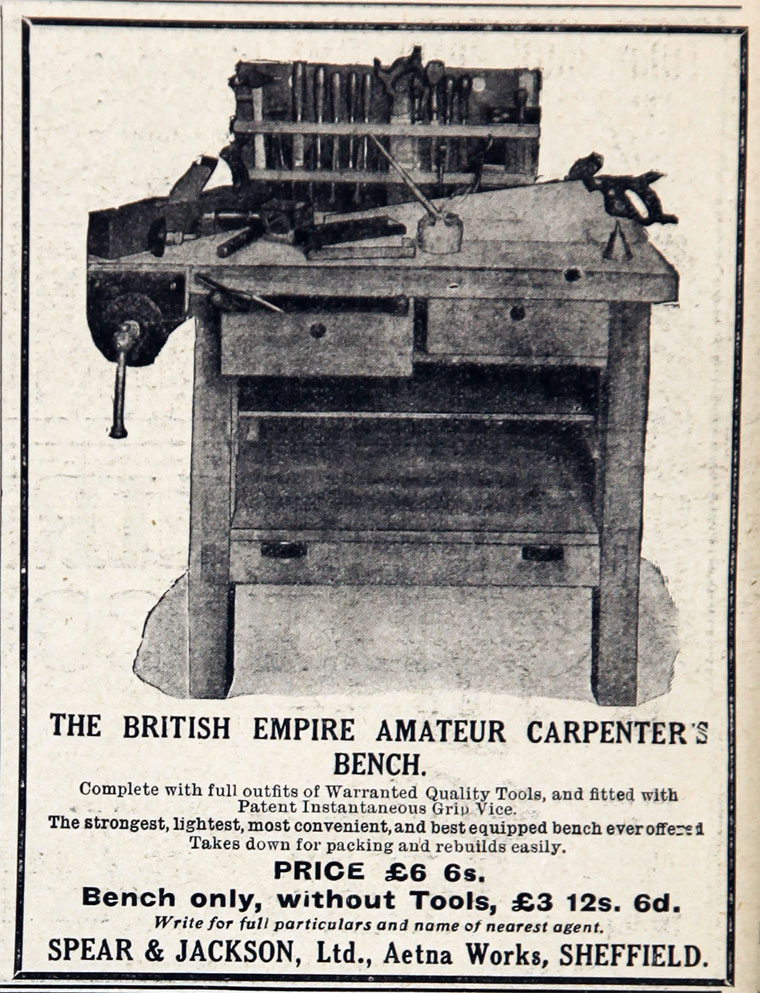 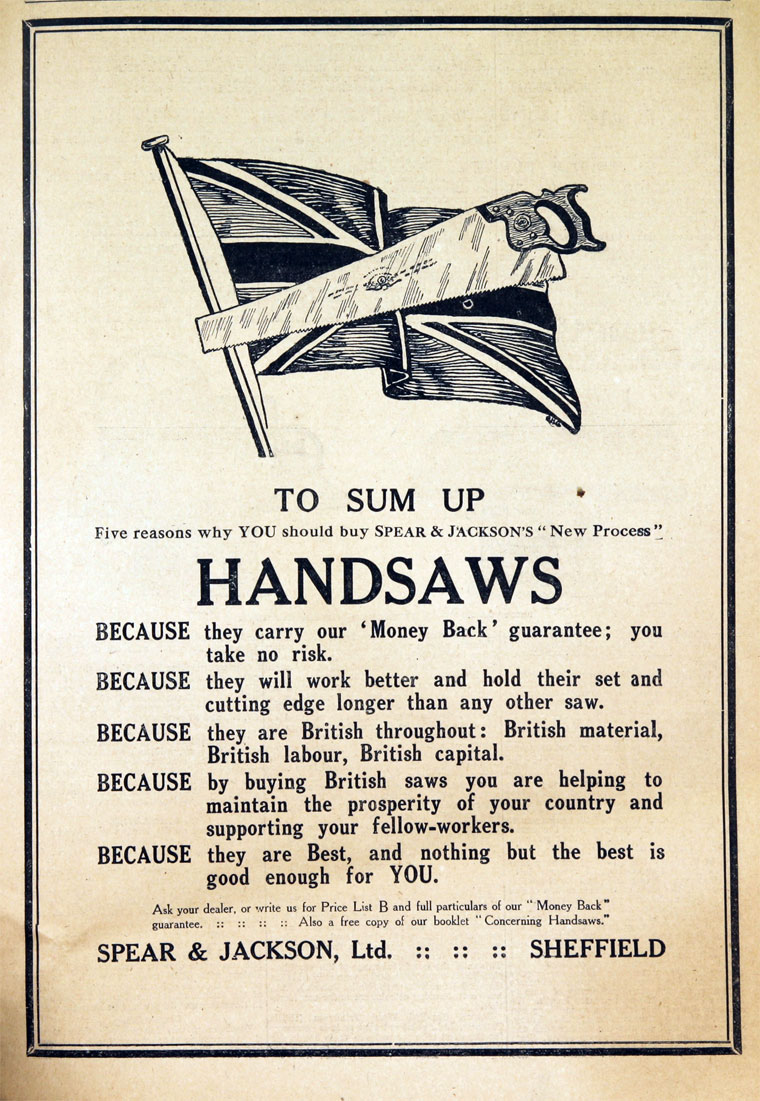 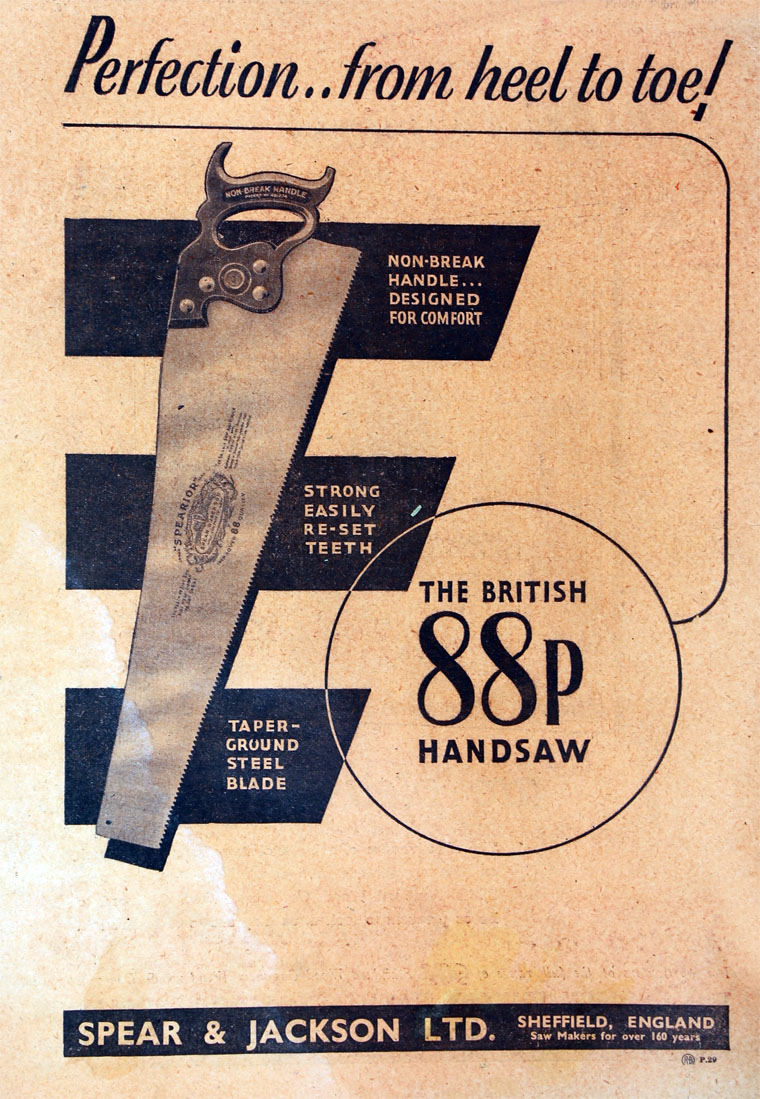 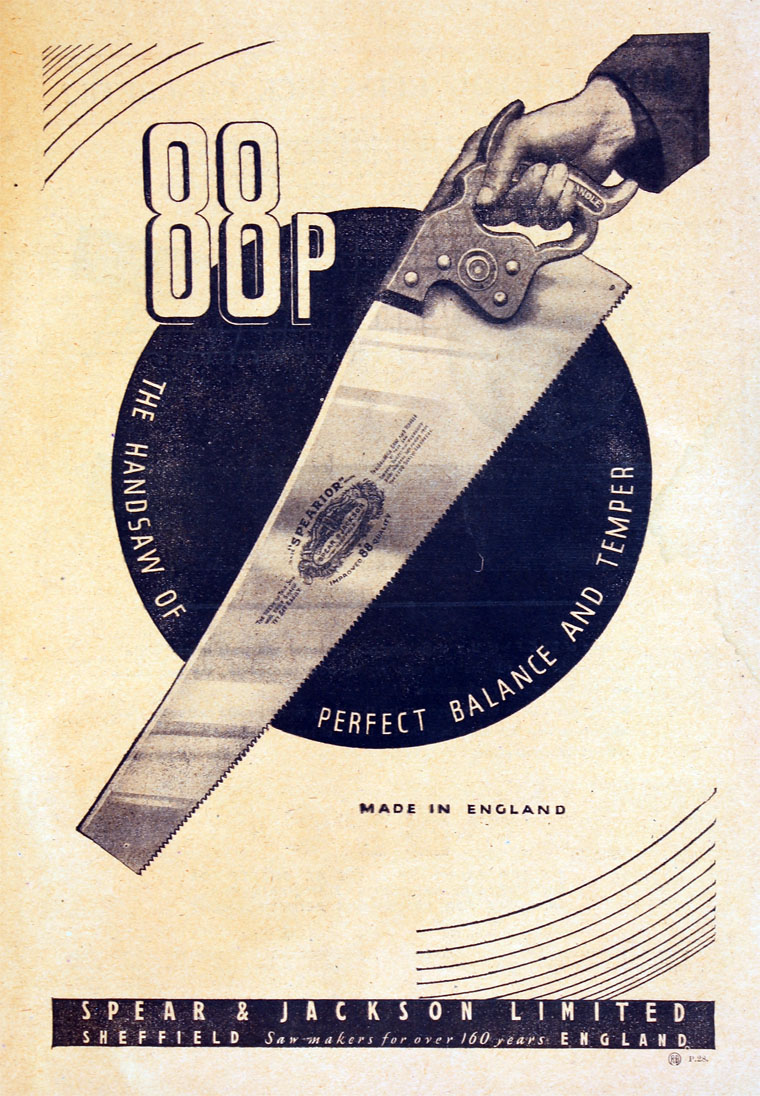 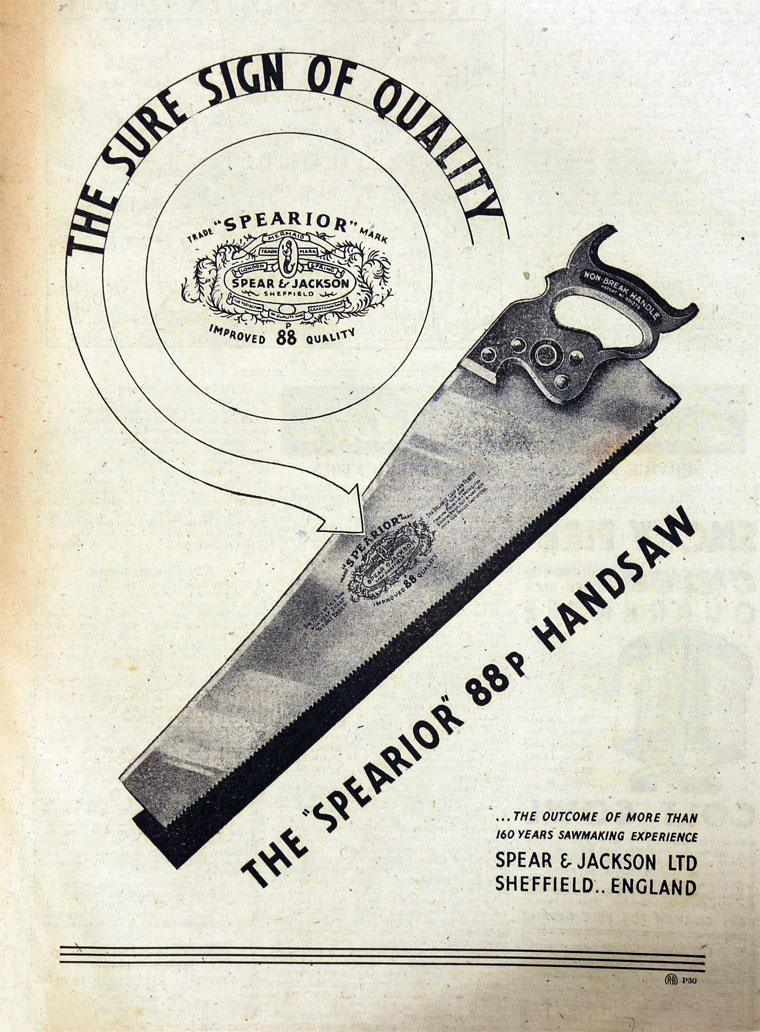 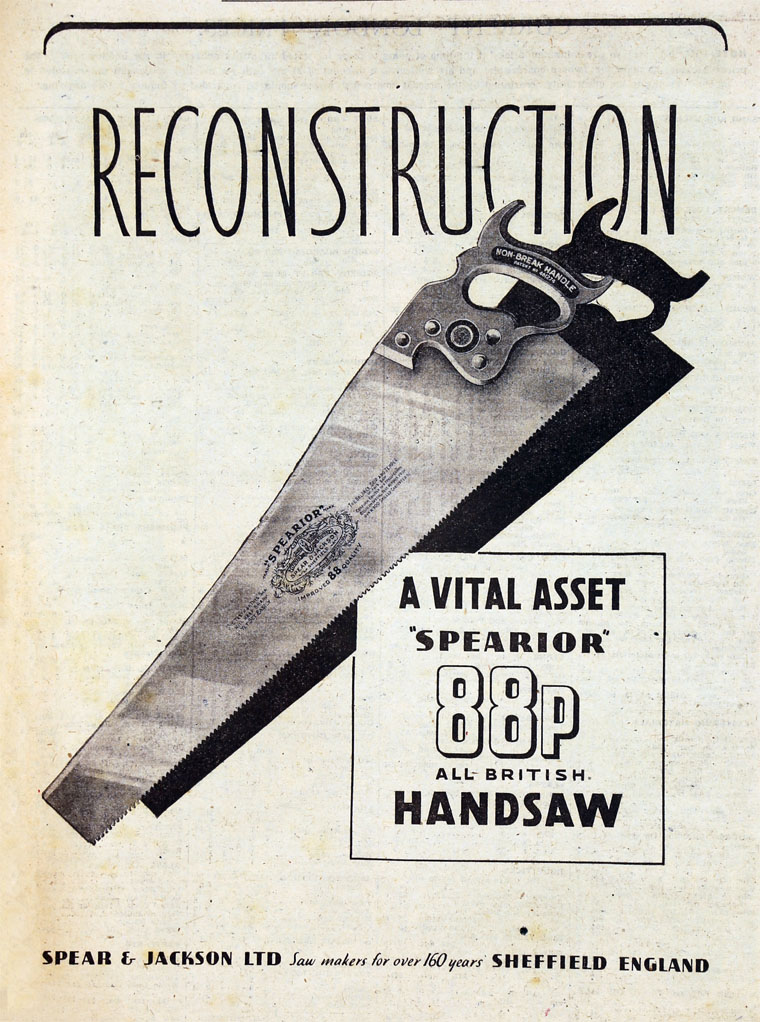 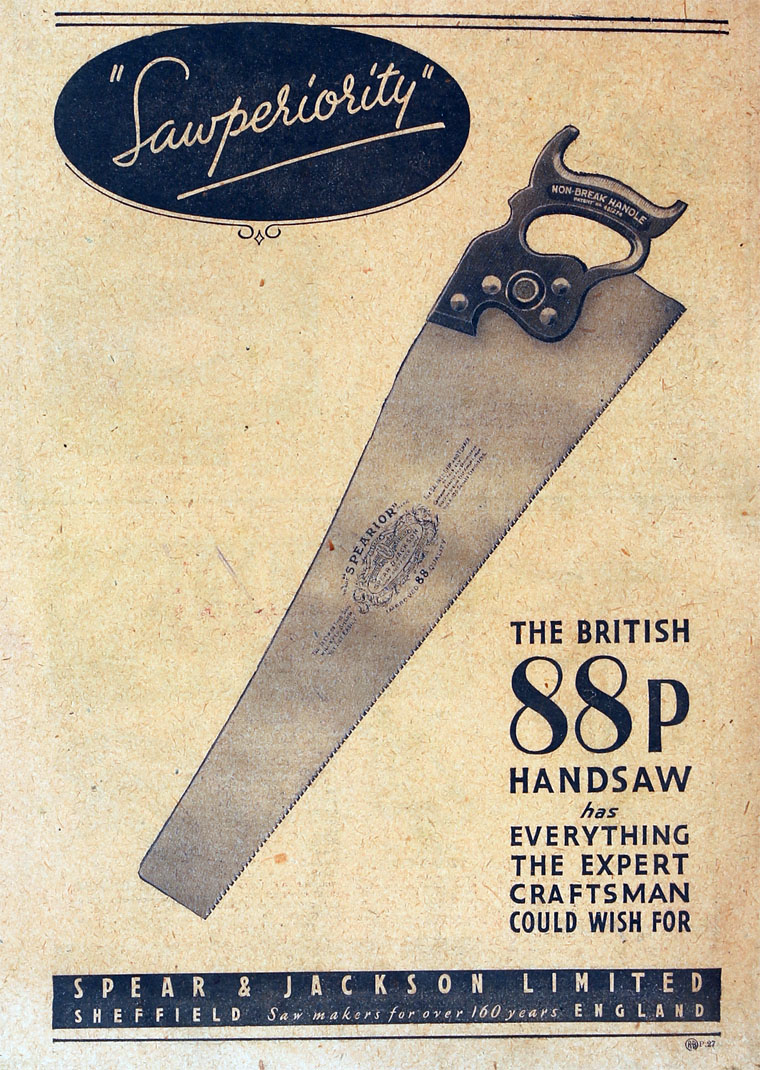 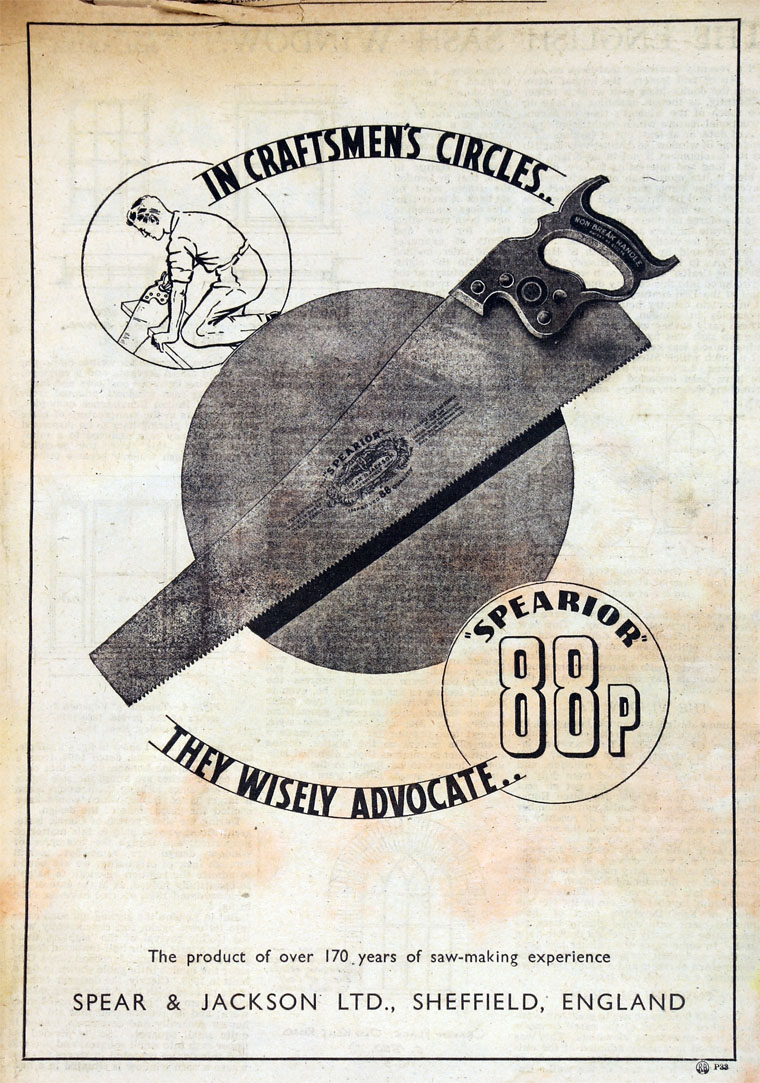 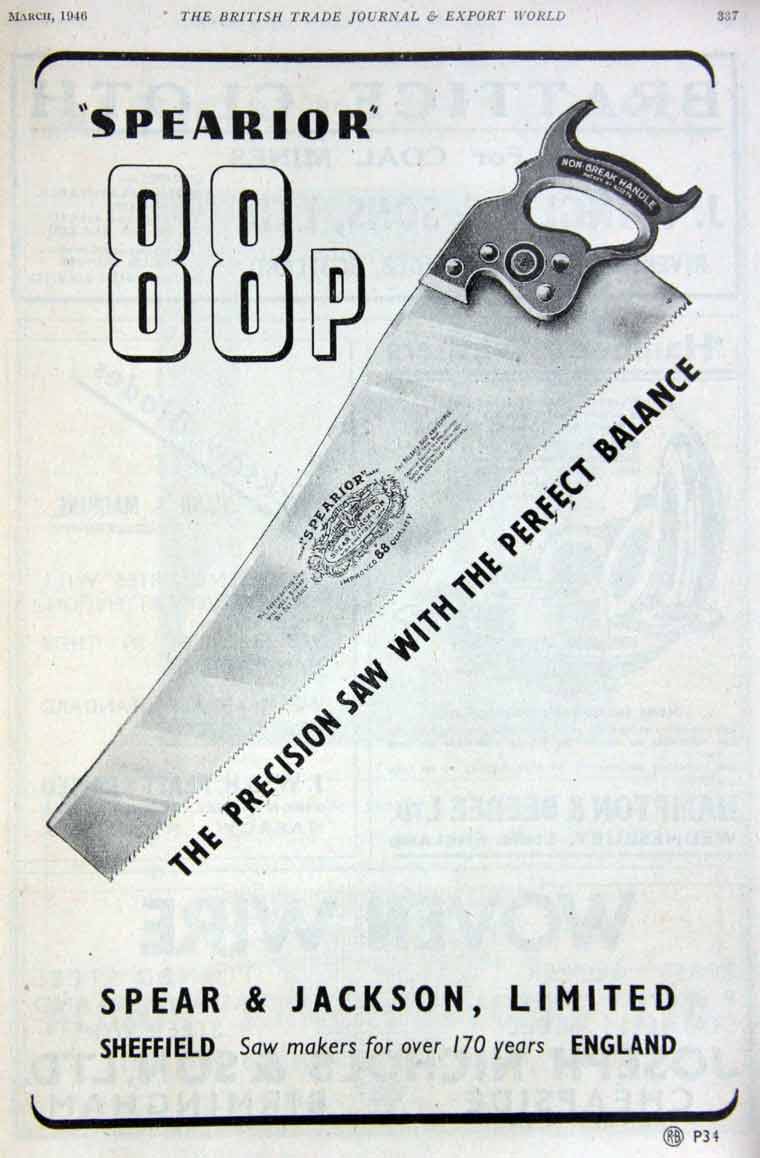 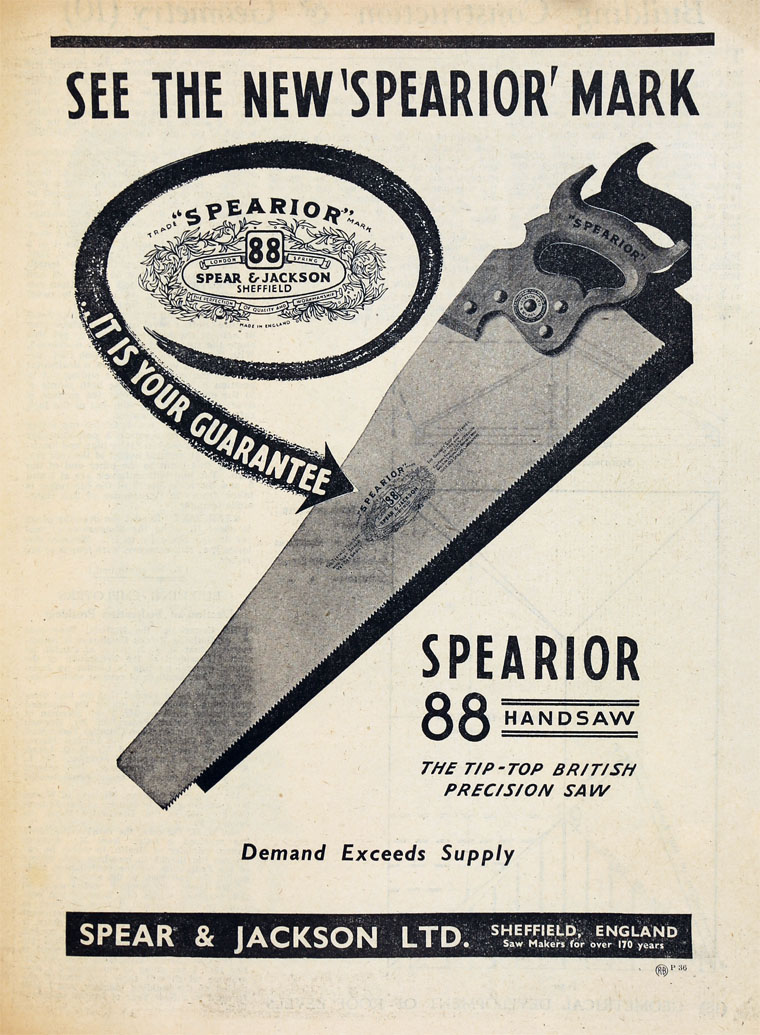 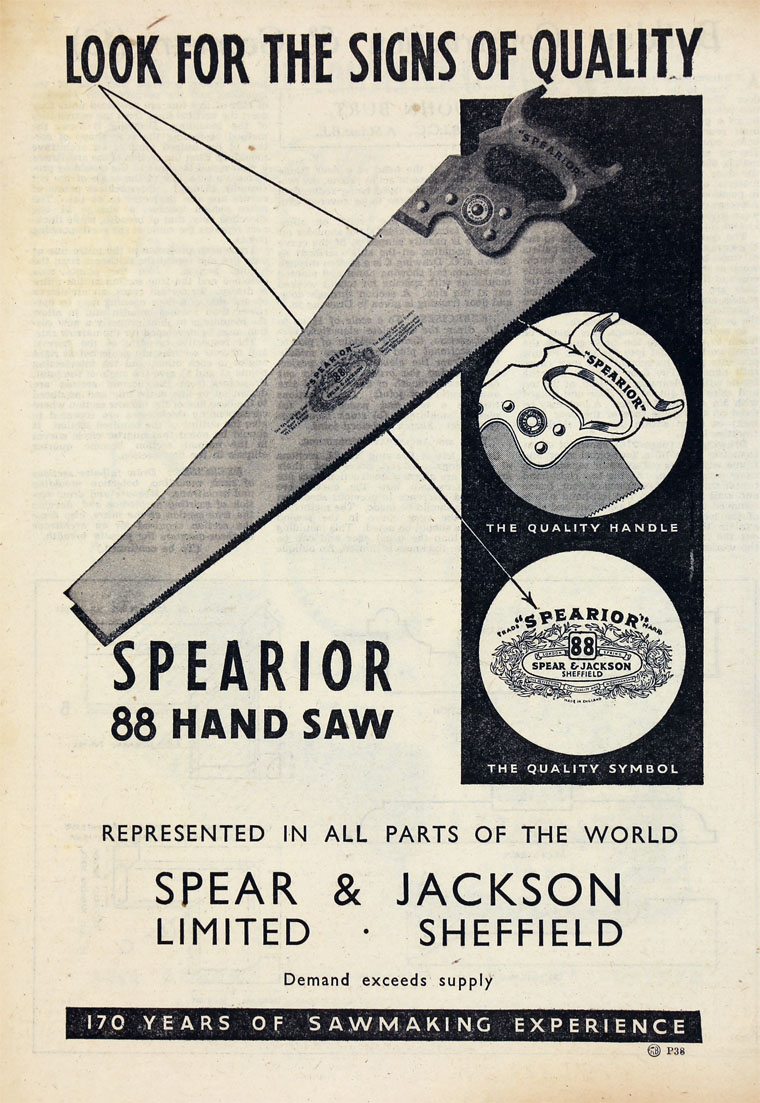 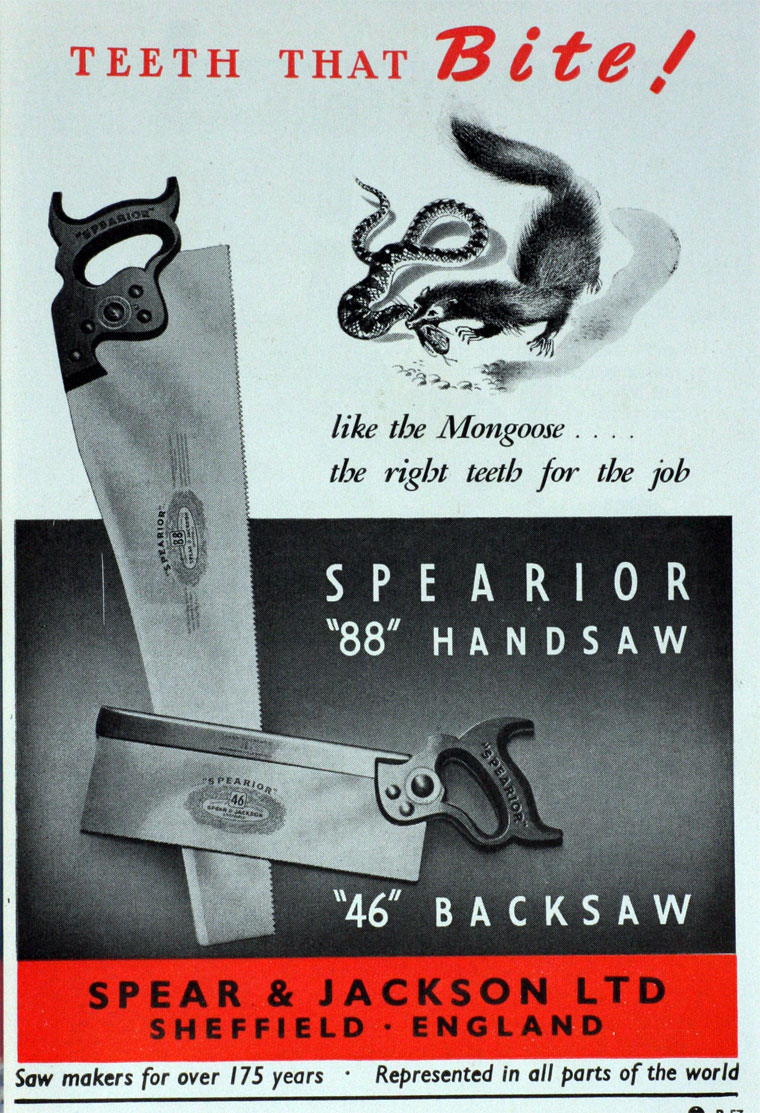 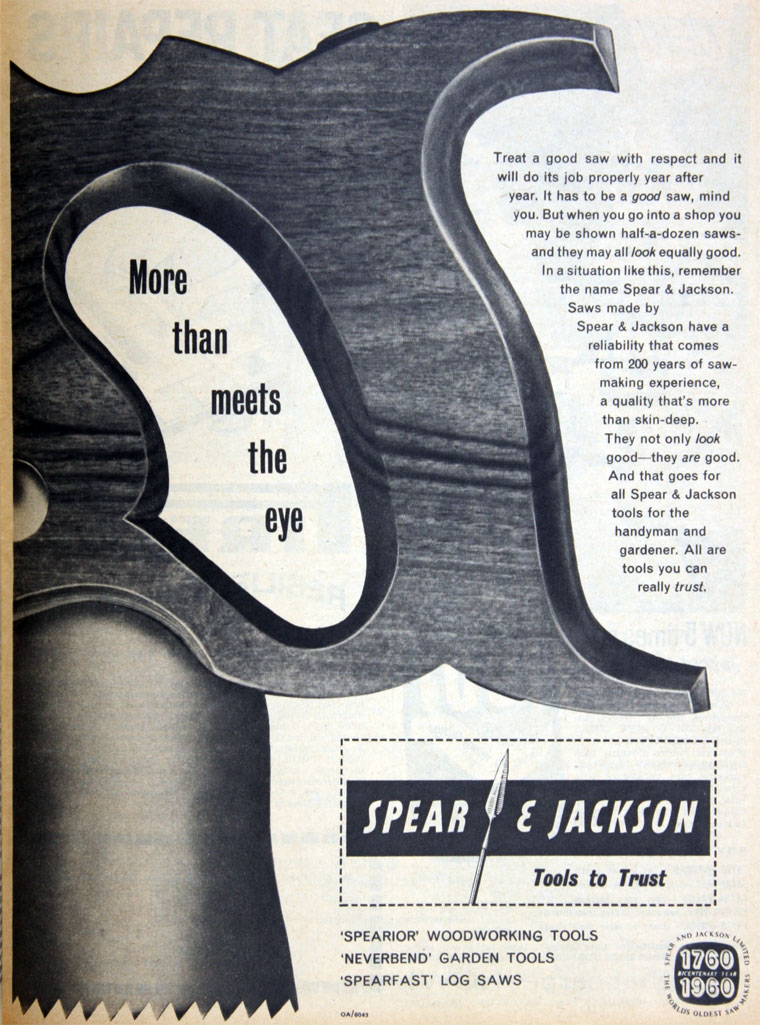 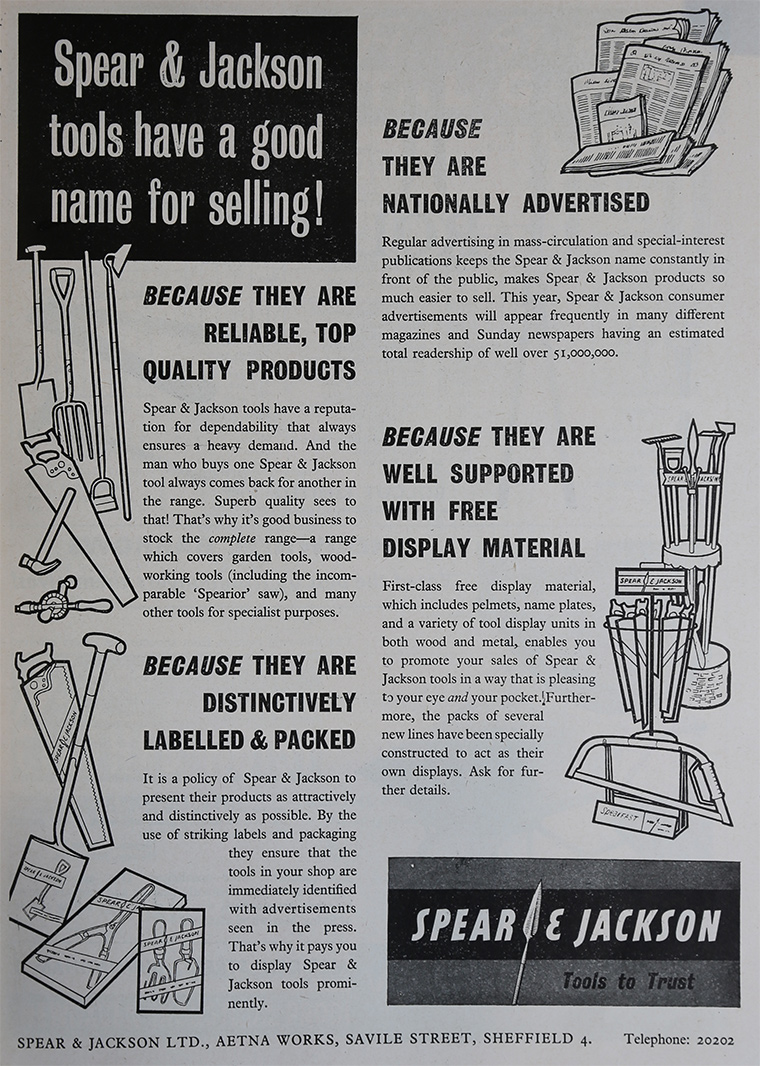 1760 A business was set up in Sheffield by John Love, a draper, and a Mr. Manson, making use of the new material, crucible steel, to make saws.

1775 The Partnership between John Love, Alexander Spear, and William Alexander (2), all of Sheffield in the County of York, Linen-drapers and Factors, was dissolved by mutual Consent; the said Business was continued by John Love and Alexander Spear.[1]

1783 John Love and Co, factors of Sheffield, accepted William Littlewood as an apprentice[2]

1802 John and Alexander Spear and Co, saw manufacturers, took on Stephen Liversidge as an apprentice.[4]

1820 The company were exporting saws to Europe and America. John Spear took Samuel Jackson as a partner. The firm became Spear, Jackson and Bramall.

Spear and Jackson were the second business in Sheffield to relocate close to the new Sheffield and Rotherham Railway so as to able to load products directly onto railway trucks, thereby saving considerably on transport costs[9]

1851 Exhibited at the 1851 Great Exhibition and won a medal for their 5ft circular saw.

1851 After the death of Mr Spears, the Jackson brothers (Samuel and Robert) were the senior partners

1872 Patent to Robert Jackson and Joseph Burdekin Jackson, File and Steel Manufacturers, trading under the style or firm of Spear and Jackson, for an invention of "improvements in machinery or apparatus for cutting files."[12]

1873 Dissolution of the Partnership between Robert Jackson (late of Carrysbrook, in the parish of Sheffield, in the county of York, who died on the 21st day of July, 1873) and Joseph Burdekin Jackson, of Tapton in the same parish, in the trades or businesses of Merchants, and Manufacturers of Files, Steel Saws, Edge Tools, Machine Knives, Agricultural Implements, and other Articles of Hardware, at Etna Works, in Saville-street East, in Sheffield aforesaid, and elsewhere, under the style or firm of Spear and Jackson; the business was carried on alone by the said Joseph Burdekin Jackson, under the said style or firm of Spear and Jackson[13]

1925 Mr Ernest Wilson left for New Zealand to act as sole representative for the company as well as Joseph Rodgers and Sons.[14]

1926 A. K. Wilson was governing director of the company, and also a director of Joseph Rodgers and Sons.[15]

1946 The company found itself well placed to respond to the great demand for its products post-war; the research department was busy with new developments; investments had been made in new Hollerith machines which it was hoped would enable tighter control of production and faster response to problems[17]

1967 Spearwell Tools was formed to merge the gardening and agricultural interests of Spear and Jackson and Eva Industries[21]; jointly owned by the 2 companies

1970 After a period of losses by Spearwell, and several factory closures, Spear and Jackson acquired Eva's interest in Spearwell Tools[23]

1985 Acquired by James Neill and Co

1995 The new company was renamed Spear and Jackson plc.

2007 Spear and Jackson exported to 115 countries and had subsidiary companies in Australia, New Zealand and the USA. After 245 years of production, Spear and Jackson's headquarters remains in Sheffield.

2020 Most Spear & Jackson products are made in the Far East.