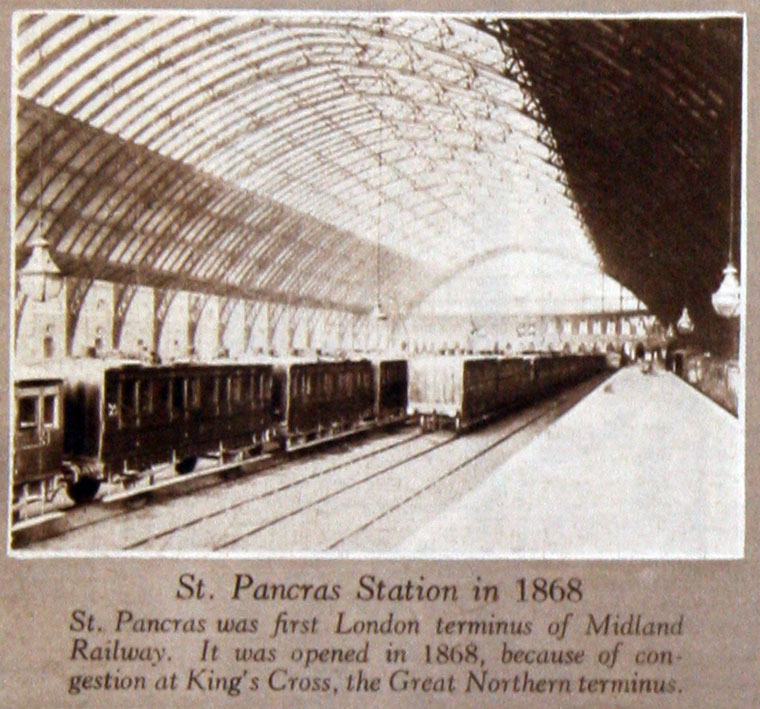 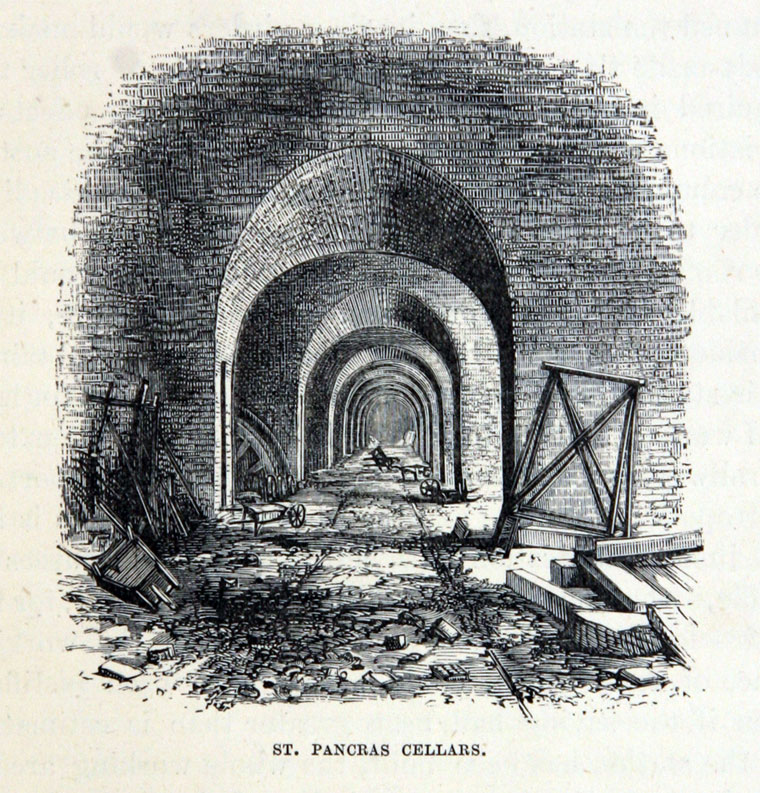 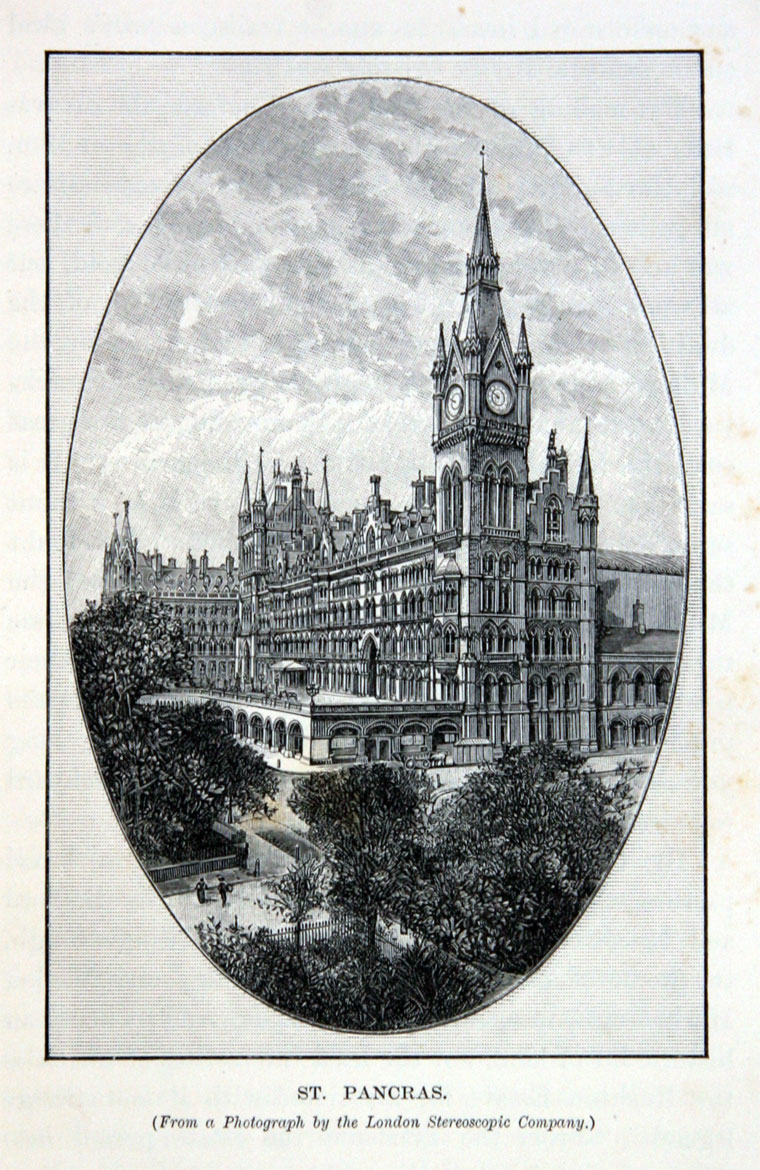 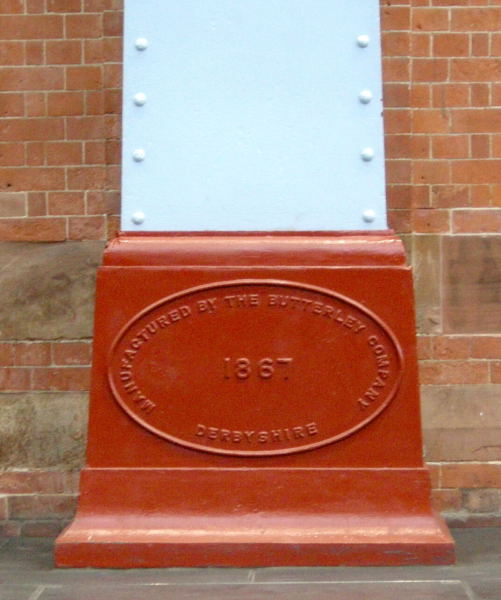 1867 Structural ironwork by the Butterley Co 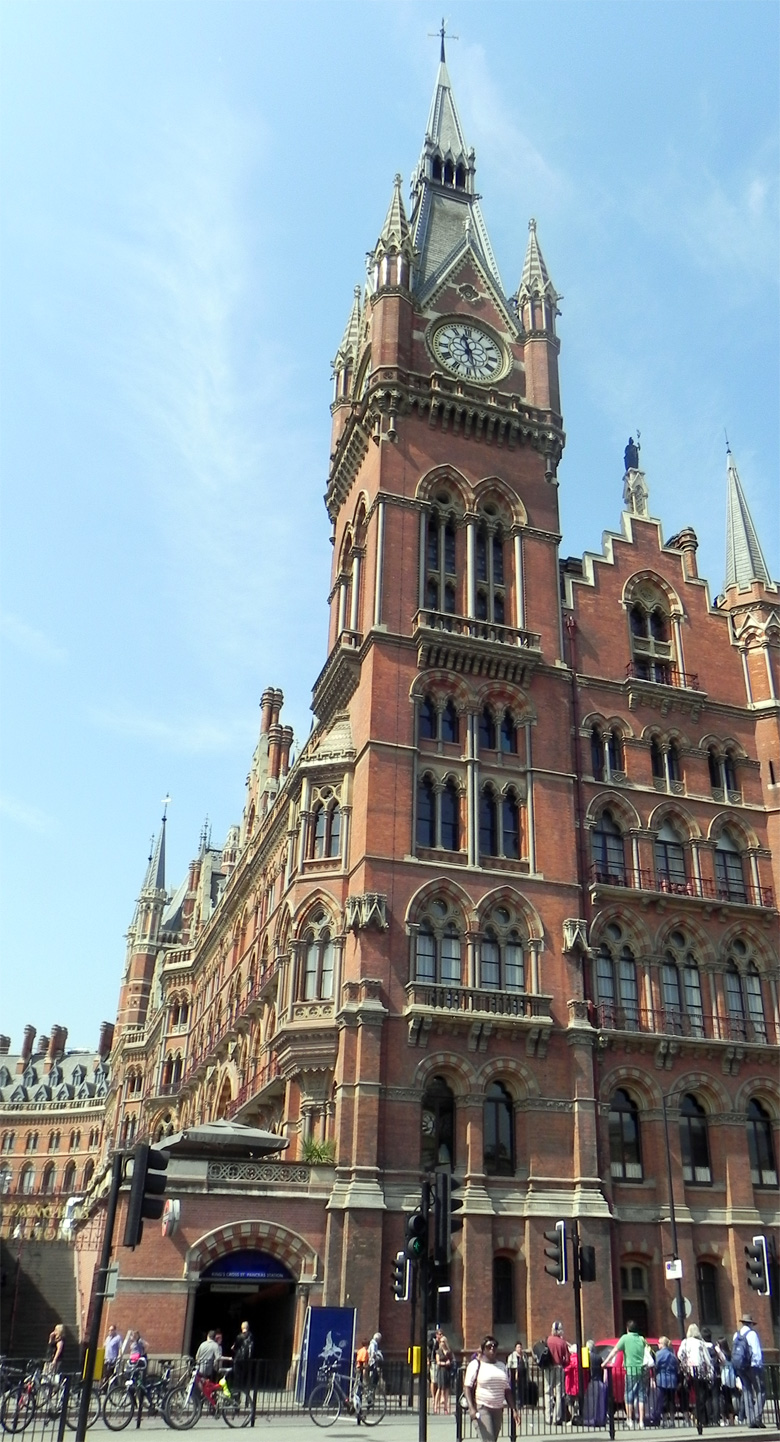 The station was commissioned by the Midland Railway.

Prior to the 1860s, the company had a concentration of routes in the Midlands and north of London but not its own route to the capital. From 1840, Midland trains to and from London ran from Euston using the London and North Western Railwayline via a junction at Rugby. Congestion and delays south of Rugby quickly became commonplace as services expanded.

A new London line was proposed around 1845, towards the end of the period of speculation later dubbed "Railway Mania". The Great Northern Railway line was approved by Parliament in 1846 and a Midland Railway spur from Leicester to Hitchin was agreed in 1847.

While the Great Northern line was constructed, the Midland spur was quietly abandoned in 1850 due to financial problems. Pressure from businesses in Leicestershire, Northamptonshire and Bedfordshire (notably from William Whitbread, who owned roughly 12% of the land over which the line would run) revived the spur scheme. The line was re-presented to Parliament and approved in 1853. Building began quickly but did not proceed at any great pace: the line was opened in mid-1857.

The Midland Railway secured initial running power for seven years at a minimum of £20,000 a year. The Midland Company now had two routes into London, through Euston and King's Cross, and traffic quickly expanded to take advantage, especially with the coal trade, with the Midland Railway transporting around a fifth of the total coal to London by 1852.

In mid-1862, due to the enormous traffic for the second International Exhibition, the Great Northern and the Midland companies clashed over the restricted capacity of the line. This was regarded as the stimulus for the Midland Company to build its own line and surveying for a 49.75 mile line from Bedford to London began in October 1862. However, the Midland Company had been buying large portions of land in the parish of St Pancras since 1861.

St Pancras was an unprepossessing district, with notorious slums. The area's other landmarks were the covered Fleet River, Regent's Canal, a gas-works, and an old church with a large graveyard.

For the terminus the Midland Railway chose a site backing onto New Road (later Euston Road) bounded by what are now Midland Road and Pancras Road, a few hundred yards to the east of Euston and immediately to the west of King's Cross station. The initial plan was to take the station's approach tracks under the canal in a tunnel, although the churchyard and the gas-works were added problems. The site was occupied by housing, the estates of Somers Town and the slums of Agar Town. The landlords sold up for £19,500 and cleared out the residents, without compensation, for a further £200. The church was demolished and a replacement built for £12,000 in 1868–69 in Kentish Town. The demolished church, St Luke's, was re-erected piece by piece in 1867 as a Congregational church in Wanstead, and still exists (now a United Reformed church).

The company intended to connect from the site through a tunnel (the St Pancras Branch) to the new Metropolitan Line, opened in 1863 running from Paddington to Farringdon Street below the Euston Road, providing for a through route to Kent.

The sloping and irregular form of the site posed certain problems and the Midland Railway directors were determined to impress London with their new station. They could see the ornateness of Euston, with its famous arch; the functional success of Lewis Cubitt's King's Cross; the design innovations in iron, glass and layout by Brunel at Paddington; and, significantly, the single span roof designs of John Hawkshaw being built at Charing Cross and Cannon Street.

The initial plan of the station was laid out by William Henry Barlow, the Midland's consulting engineer. Barlow persuaded the company to modify its original plans, raising the station 20ft on iron columns, thus providing a usable undercroft space and also allowing the approach tracks to cross the Regent's Canal on a bridge rather than a tunnel. The single span roof of 243 ft was a collaboration between Barlow and Rowland Mason Ordish and was the greatest built up to that time. It allowed the station to make maximum use of the space beneath without obstructions. A space for a fronting transverse hotel was included in the plan and the overall plan was accepted in early 1865.

A competition was held for the actual design of the station buildings and hotel in May 1865. Eleven architects were invited to compete, submitting their designs in August. In January 1866 the brick Gothic revival designs of the prominent George Gilbert Scott were chosen. There was some disquiet at the choice, in part because Scott's designs, at £315,000, were by far the most expensive. The sheer grandeur of Scott's frontage impressed the Midland Railway directors, achieving their objective of outclassing all the other stations in the capital. A subsequent financial squeeze trimmed several floors from the frontage and certain ornateness but the impressive design largely remained.

Construction of the station, minus the roof which was a separate tender, was budgeted at £310,000, and after a few problems Waring Brothers' tender of £320,000 was accepted. The roof tender went to the Butterley Company for £117,000. Work began in the autumn of 1864 with a temporary bridge over the canal and the demolition of Somers Town and Agar Town. Construction of the station foundations did not start until July 1866 and delays through technical problems, especially in the roof construction, were commonplace.

The graveyard posed the initial problems - the main line was to pass over it on a girder bridge and the branch to the Metropolitan under it in a tunnel. Disturbance of the remains was expected but was, initially, carelessly handled. The tunnelling was especially delayed by the presence of decomposing human remains, the many coffins encountered, and a London-wide outbreak of cholera leading to the requirement to enclose the River Fleet entirely in iron. Despite this the connection was completed in January 1867.

The company was hoping to complete most essential building by January 1868. The goods station in Agar Town received its first train in September 1867, but passenger services through to the Metropolitan line did not begin until July 1868. However, the station was not finished when it opened, to little ceremony, on 1 October. The final rib for the trainshed roof had been fitted only in mid-September and the station was a mass of temporary structures for the passengers. The first train, an express for Manchester, ran non-stop from Kentish Town to Leicester - the longest non-stop run in the world at 97 miles

The undercroft of the station was used to store beer barrels brought by train from Burton-upon-Trent, a major brewing town served by the Midland Railway.

Work on the Midland Grand Hotel did not begin until mid-1868. Designed by architect George Gilbert Scott and with construction in a number of stages, the hotel did not open to customers until 5 May 1873. The process of adding fixtures and fittings was contentious as the Midland Railway cut Scott's perceived extravagances and only in late 1876 was Scott finally paid off. The total costs for the building were £438,000. The hotel building initially appears to be in a polychromatic Italian Gothic style – inspired by John Ruskin's Stones of Venice – but on a closer viewing, it incorporates features from a variety of periods and countries. From such an eclectic approach, Scott anticipated that a new genre would emerge.

Following construction services were provided by the Midland Railway. This was a period of expansion as the major routes to Manchester, Nottingham, Sheffield and Carlisle opened.

The 20th century did not, on the whole, serve St Pancras station well. The Railways Act of 1921 forced the merger of the Midland Railway with the London and North Western Railway (LNWR) into the London, Midland and Scottish Railway (LMS), and the LMS adopted the LNWR's Euston station as its principal London terminus. The Midland Grand Hotel was closed in 1935, and the building was subsequently used as offices. During the second world war, bombing inflicted damage on the train shed, which was only partially reglazed after the war.

The 1960s electrification of the WCML between London and Manchester saw the Manchester Pullman running from St Pancras via Derby and Matlock. These trains and those to Glasgow were withdrawn following the completion of the the rebuilding of Euston and the consolidation of these services.

By the 1960s, St Pancras station came to be seen as redundant, and several attempts were made to close the station and demolish the hotel (by now known as St Pancras Chambers). These attempts provoked strong and successful opposition, with the campaign led by the then Poet Laureate, John Betjeman.

During the sectorisation of British Rail in 1986, mainline services were provided to the East Midlands by the InterCity sector (Midland Division), with London suburban services to St Albans, Luton and Bedford being provided by Network South East. It was during this period (in 1988) that the Snow Hill tunnel opened resulting in the creation of the Thameslink route and resulting diverting of the majority of suburban trains onto the new route. However the station continued to be served by trains running on the old Midland main line to Leicester, Nottingham and Sheffield, together with a few suburban services to Bedford and Luton. This constituted only a few trains an hour and left the station underused and empty.

Following the privatisation of British Rail, the long distance services from St Pancras were franchised to the Midland Mainline, a train operating company owned by the National Express Group, with a franchise start date of 28 April 1996. The few remaining suburban trains still operating into St Pancras were operated by the Thameslink train operating company, owned by Govia, from 2 March 1997.

During the 2000s major rebuild of the WCML history repeated itself with St Pancras hosting trains to Manchester, this time via the Hope Valley route, under the title of Project Rio.