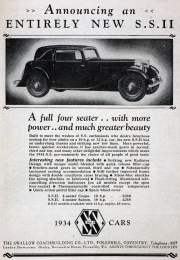 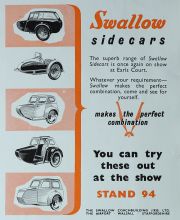 Maker of cars, motorcycle sidecars and motorcycles, of Coventry

1928 New name given to the Swallow Sidecar Co, which had been established by William Lyons and William Walmsley.

The company started making cars under the name S. S., as well as motorcycle sidecars.

Lyons wanted the company to go public, but Walmsley did not agree and let Lyons buy him out.

1945 The company was sold to the Helliwell Group when Jaguar was formed. Manufacture of Swallow sidecars was transferred to Helliwell’s factory at Walsall Airport, where the company manufactured aircraft components.

1946 Helliwell was taken over by Tube Investments.

The Swallow motor scooter was made and sold by the Swallow Coachbuilding Co of Walsall, Staffordshire, from November 1946 until September 1951.

1947 Already well known for its sidecars, the firm introduced the Gadabout. It was fairly basic and lacked performance. This was due to the combination of its weight and the use of the small Villiers 9D pre-war engine.

1949 The Mark II model was introduced, it had rubber-in-torsion front suspension and the foot-change Villiers 10D engine with fan-cooling. Both Gadabout models had been available with a Swallow box sidecar, named the Gadabout Commercial.

1951 Some later Mark II models were given the Villiers 6E 197cc engine becoming the Gadabout Commercial Major Mark III The arrival of the sleek and stylish Italian makes brought production to a close.

Production of the Gadabout ended in the early 1950s.

The Doretti was introduced; this had a tubular Reynolds 531 Cromolly chassis with a body made of a steel inner skin and aluminium outer. Most cars were supplied with overdrive and were capable of 100mph. 276 cars were made including a single fixed head coupe version. The car was designed by in-house engineer Frank Rainbow, and produced in the TI factory at the The Airport, Walsall, Staffordshire.

1955 Production ended when the parent company TI changed policy. Pressure from the British motor industry, most notably Jaguar itself, led to ending production of the Doretti. It is thought that the Directors of TI were convinced that continued production of the Doretti sports car placed TI in direct competition with their customers for raw materials creating a serious conflict of interest.