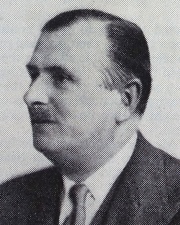 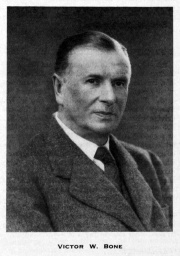 Mr. BONE was educated at Ipswich and at the local technical school.

He served his apprenticeship with Ransomes, Sims, and Jefferies, Ltd., Ipswich, and has since continued with that firm.

After various managerial appointments involving extensive travels abroad, he was appointed a joint managing director in 1917.

After the amalgamation of Ransomes, Sims, and Jefferies, Ltd., with Ruston and Hornsby, Ltd., in 1919, he transferred to Lincoln, becoming a director in charge of manufacturing for that company.

In 1929 Mr. Bone took a responsible part in the formation of Ruston-Bucyrus, Ltd., and was managing director from 1930 until 1944, when he took over the managing directorship of the parent company, Ruston and Hornsby, Ltd. He has since been also appointed deputy-chairman.

"WE have learned with regret of the death of Mr. Victor Bone, M.I.Mech.E., which occurred in a nursing home at Lincoln on Friday last, October 12th. Until his retirement, through ill-health, about two years ago, he was chairman and managing director of Ruston and Hornsby, Ltd., which company and its associates he had served throughout the whole of his active working years.

Victor William Bone was born at Ipswich on February 17, 1883, and received his general education at Ipswich Middle School. In 1900 he began an apprenticeship with Ransomes, Sims and Jefferies, Ltd., studying, at the same time, at evening classes at the Ipswich echnical School. Upon completion of his apprenticeship Mr. Bone continued on the staff of Ransomes, Sims and Jefferies, Ltd., and subsequently spent four years, from 1907 to 1911 , visiting European countries in the firm's interested. In 1911 he was appointed manager of the Ransomes' Parkside Works at Ipswich, a position which he held for the next foul' years. Mr. Bone then became manager of an aircraft works, established at which by his firm- principally under his direction-during the first world war. In 1917 he was appointed managing director of Ransomes, Sims and Jefferies, Ltd., taking particular responsibility for the activities of the Orwell works. In 1922 Mr. Bone went to Lincoln as works director of Ruston and Hornsby, Ltd., and eight years later he was appointed managing director of its then newly-formed associate, Ruston-Bucyrus, Ltd. He continued in that office for fourteen years and then relinquished it to succeed the late Mr. G. R. Sharpley as managing director of the parent company.

Mr. Bone was appointed chairman of Ruston and Hornsby, Ltd., in 1948, and it was a matter of keen regret among his colleagues and business associates that he was compelled, by failing health, to retire from that office a year after succeeding to it. Victor Bone saw his firm and its associates make considerable progress, progress that was in no small measure brought about by his able leadership. He will be affectionately remembered by those who knew him at Ipswich and Lincoln and by those who came into contact with him in the engineering and public works contracting industries.

"VICTOR WILLIAM BONE. M.B.E., who died on 12th October 1951, at the age of sixty-eight, was formerly chairman and managing director of Ruston and Hornsby, Ltd., Lincoln. He received his education at Ipswich Middle School and served an apprenticeship at the Orwell Works of Ransomes, Sims and Jefferies, Ltd., from 1900 to 1905, concurrently attending classes at Ipswich Technical School. After carrying out special work for the firm, he travelled widely as technical engineer in Europe, North Africa, and Russia. In 1917 he was appointed works director and joint managing director, and assumed responsibility for the entire control of the manufacturing side of the business, with a personnel of some 4,000. Following the association with Ruston and Hornsby, Ltd., and Ransomes, Sims and Jefferies, Ltd., he became works director at Lincoln in 1921, retaining his directorship with the Ipswich firm. In 1930, when the separate company of Ruston-Bucyrus, Ltd., was formed, he was appointed managing director, a position he retained until 1944, when he took over the duties of the same office for the parent company, Ruston and Hornsby, Ltd. He became chairman in 1948, but a year later he resigned and retired from active business. Mr. Bone was elected a Member of the Institution in 1920 and will be remembered with gratitude for his long services as a member of the East Midlands Branch Committee from 1933 to 1945; in 1933 and 1936 he held office as Chairman of the Branch and was a Member of Council whilst occupying that position. He was also joint author of "Public Works Contractors' Plant", one of the Institution Centenary Lectures delivered in 1947 and published in the PROCEEDINGS. Mr. Bone had many other interests : in Ipswich he took a leading part in the formation of the East Anglian Employers' Association, and the reorganization in 1919 of the Ipswich Engineering Society, of which he was a past-president. In addition he was a director and vice-chairman of Davey, Paxman and Company, Ltd., Colchester, and chairman and director of F. H. Lloyd and Company, Ltd., steel founders, Staffordshire."