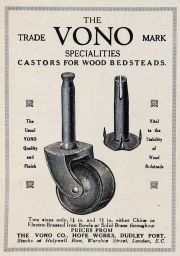 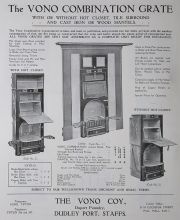 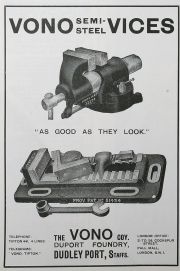 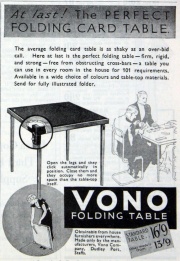 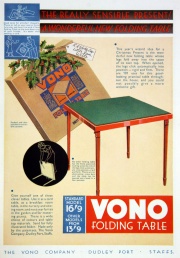 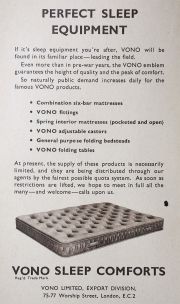 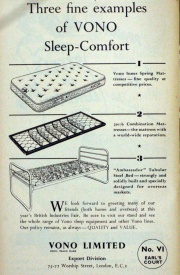 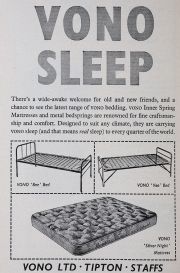 Later the name Duport was adopted which was a contraction of Dudley Port.

1939 Incorporated as a private company to acquire the business of The Vono Company.

WWII Production of Bailey Bridges, pontoons, ammunition and other equipment for the armed services.

1946 Converted to a public company, which was concerned with production of domestic equipment, wood and metal components required for the Housing Programme; manufacture of high-class engineering accessories for the motor, aircraft, electrical, gas and refrigeration trades; speciality castings; plastic mouldings; fibre upholstery and components for the railway, motor, aircraft and furnishing trades. Several of the directors were also directors of Revo Electric Co. Subsidiary companies were[2]:

1950 Death of first chairman of Vono as a public company; appointment of W.L. Barrows as chairman[4]. Company's name changed to Vono Industrial Products.

1956 Acquired the remaining shares in Haybridge Steel Co of Wellington, Shropshire which owned F. W. Ratcliff and Co of Oldbury[7]. Name of company changed from Vono Industrial Products Ltd to Duport to better reflect the business and because the old name was too cumbersome[8].

1965 The M.D. of Vono Ltd wrote an article calling for more novelty in British furniture (design and production methods) to attack export markets[9]