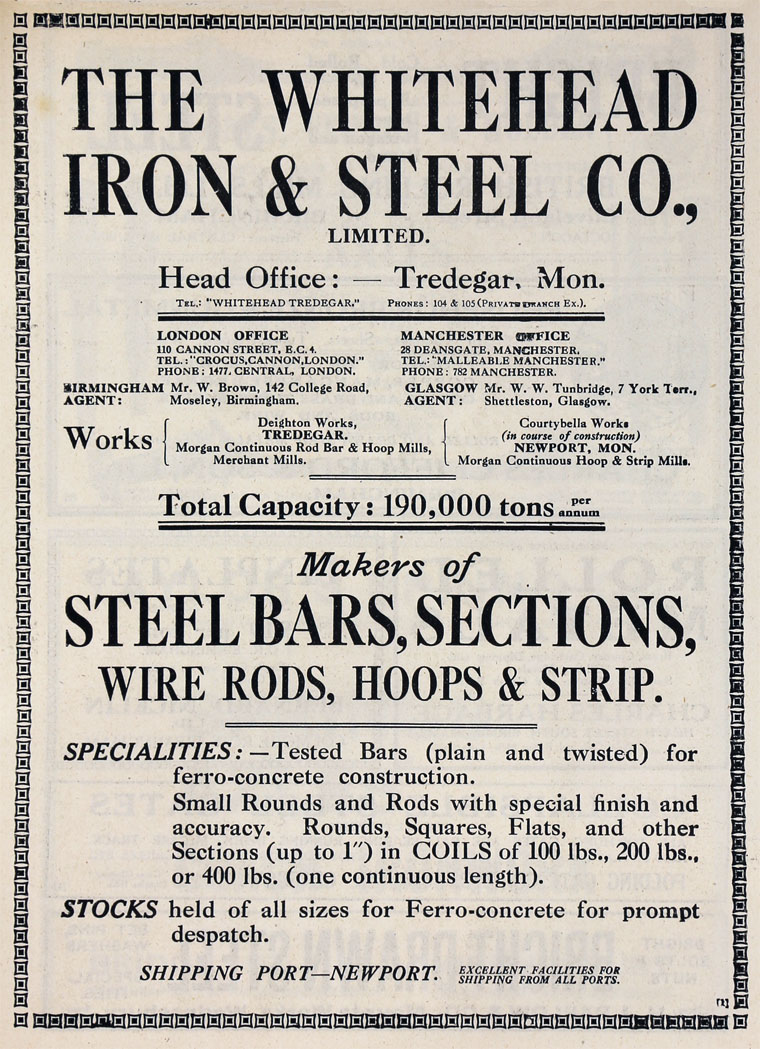 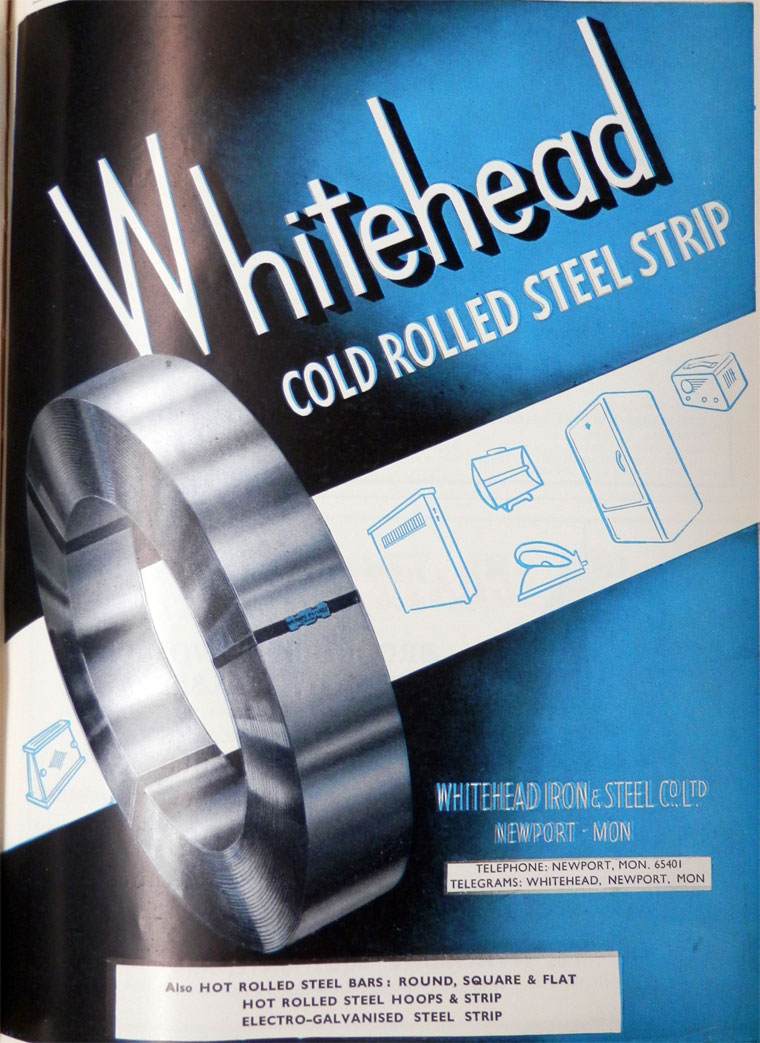 of Tredegar and Courtybella, Newport, Mons. Producers of various rolled steel products, pioneer in the UK of continuous rolling of steel[1].

1906 Purchased lease of portion of Tredegar Works and formed the Whitehead Iron and Steel Co.

1906 Imported one of the few continuous rolling mills from Morgan Construction Company of USA in the face of scepticism in the sector which made financing difficult, which started operation in 1907 but there were teething problems which took years to resolve[3].

1914 Whitehead Iron and Steel Co considering moving from Tredegar to Newport, where the company had purchased land[8]

1925 Customers were slow to accept the advantage of using coils of steel instead of 10 to 20 foot sections; partly as means of increasing usage of Whitehead's mill, installed the first 16 Robertson cold rolling mills. Acquired wire mills of J. C. Hill and Co of Cwmbran; at some point the name was changed to Whitehead, Hill and Co[11].

1931 Closure of the older mill at Tredegar.

1934 New mill at Newport and the transferred mill at Redbourn brought into operation; redeemed oustanding debentures in Whitehead, Hill and Co; electro-galvanising process was a great success - the company was the only manufacturer[16].

1940 Whitehead Iron and Steel Co acquired half of the shares in Godins Ltd[18].

1946 Plan to add an extra strip mill. Carried out major expansion and refurbishment of W. A. Baker and Co to provide a modern engineering department for Whitehead Iron and Steel Co, replacing the Courtybella engineering works at Newport, as well as to supply iron and brass castings at competitive prices to external customers[19].

1955 Iron and Steel Holding and Realisation Agency offered for sale the whole of the share holding in Whitehead Iron and Steel Co[22]; received eager response with all shares sold very quickly unlike some previous offerings.

1957 After several years of closer working with Black-Clawsen of USA, W. A. Baker and Co was acquired by Black-Clawsen International[23].

1962 The British Cabinet decided that Stewarts and Lloyds' attempt to acquire Whitehead Iron and Steel Co (in order to improve integration in the British steel industry) should be prevented and that Richard Thomas and Baldwins should be encouraged to make a competitive offer; recorded as having works in "West Wales and North Lincolnshire"(sic)[24]

1963 Richard Thomas and Baldwins duly made a counter-offer, saying it wanted to protect its market as Whiteheads, an independent reroller, was one of the major customers for slab produced by its new plant at Redbourn[25]. This was seen as a form of re-nationalisation, hence counter to government policy, since Baldwins were the only steel company still owned by the government[26]. Nevertheless Baldwins bid was eventually successful.