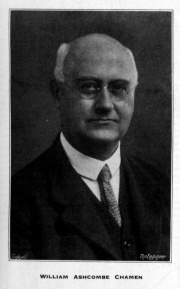 1879-81 Apprentice in the engineering department of James Gibbs and Co, Plymouth

WILLIAM ASHCOMBE CHAMEN was engineer and manager of the South Wales Electrical Power Distribution Company from 1905 until his retirement in 1927, when he became a director of the Company.

He was born at New Cross in 1864, and apprenticed at the works of Messrs. James Gibbs and Company of Plymouth.

He then joined Messrs. Crompton and Company as an improver, and during the following seventeen years was engaged on many outside works of importance for the firm, including the lighting, with arc lamps, of King's Cross Station, the installation of several electric lighting plants in Tuscany, the equipment of the Law Courts for incandescent electric lighting, and the electrical machinery at the Forth Bridge Works.

He was ultimately appointed principal outdoor engineer for the firm and was responsible for the equipment of a number of power stations and other electrical works, including Southampton Docks.

In 1898 Mr. Chamen was appointed City Electrical Engineer of Glasgow, and he designed and erected the Port Dundas and St. Andrew's Cross power stations.

In 1905 he entered into partnership with the Westminster firm of consulting engineers, Messrs. Bramwall and Harris, who amongst other works, were engaged in the design and erection of a power station for the South Wales Electrical Power Distribution Company, whom he shortly afterwards joined.

Under his direction the firm's production of power greatly increased and the plant capacity was 43,000 kw. at the time of his retirement.

He also practised as a consulting engineer in Cardiff.

He became a Member of the Institution in 1906, and was a member of the South Wales Branch Committee from its inception in 1921 until 1925.

WILLIAM ASHCOMBE CHAMEN, who died on the 13th August, 1928, was born at New Cross in 1864 and was educated at Forest School, Walthamstow.

He received a mechanical training at the works of Messrs. James Gibb and Co. at Plymouth, and then joined Messrs. Crompton and Co., with whom he remained altogether 17 years. During the early part of that period he was responsible for carrying out many important contracts, including the arc lighting of King's Cross Station, London.

After taking charge of Messrs. Crompton's exhibit at the Munich Exhibition, he resided for some time in Italy and installed electric lighting plant in several mills.

On returning to England he was entrusted with the electric lighting of the Royal Courts of Justice, one of the first glow-lamp installations in this country.

He became chief outdoor engineer to Messrs. Crompton and took a large part in the design and equipment of two power stations for the Kensington and Knightsbridge Electric Lighting Co., a power station for Barry Dock, and installations at Liverpool Street Station and Southampton Docks, as well as the electric railway on Southend pier.

Subsequently he was responsible for the municipal generating plants at Dewsbury and Yarmouth, and electric lighting at Birkenhead and South Kensington Museum.

In 1896 he was appointed city electrical engineer of Glasgow, an appointment which he held until 1905. During that period the generating stations at Port Dundas and St. Andrew's Cross were constructed.

On leaving Glasgow he joined the firm of Messrs. Bramwell and Harris, consulting engineers, who were at that time engaged in connection with several electric power companies' schemes, and shortly afterwards he was appointed engineer and manager of the South Wales Electrical Power Distribution Co., a position which he held until December 1927, when he joined the board of directors of that company and the South Wales Power Co., Ltd.

He led a very busy life, devoted a great deal of attention to church work, and was always ready to give a helping hand to those less fortunate in life.

He joined the Institution as an Associate in 1884, was elected a Member in 1894, and served on the Council in 1893-4, 1903-7 and 1913-15, and as vice-president in 1918-21. He also served for many years on the Committee of the Glasgow Local Section (now Scottish Centre), being Chairman of that Section in 1903-4 and of the Western Local Section in 1913-14. He was president of the Incorporated Municipal Electrical Association in 1900-1. In December 1923 he was elected president of the South Wales Institute of Engineers and for his presidential address to that Institute in January 1924 took for his theme the blending, by the profession and practice of the Christian Faith, of all classes in a united effort for the common weal.