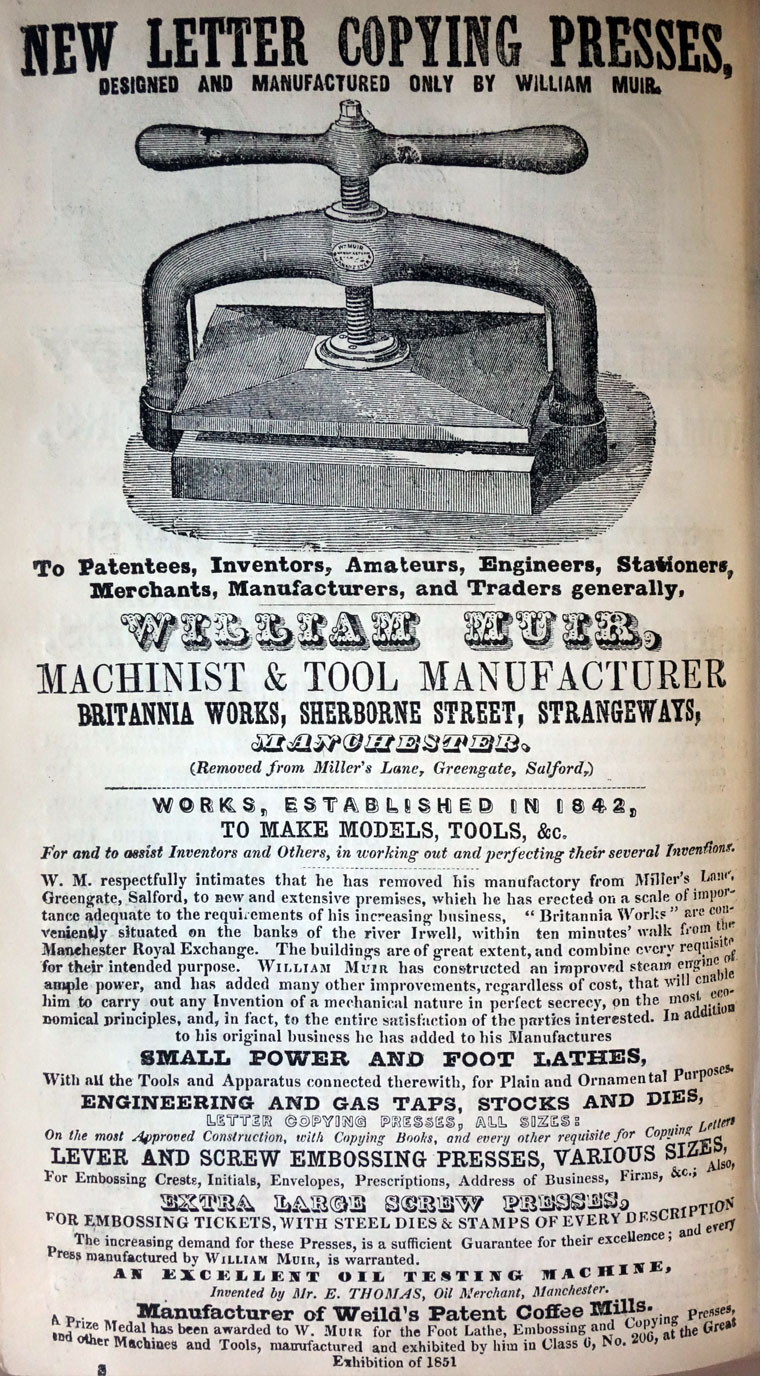 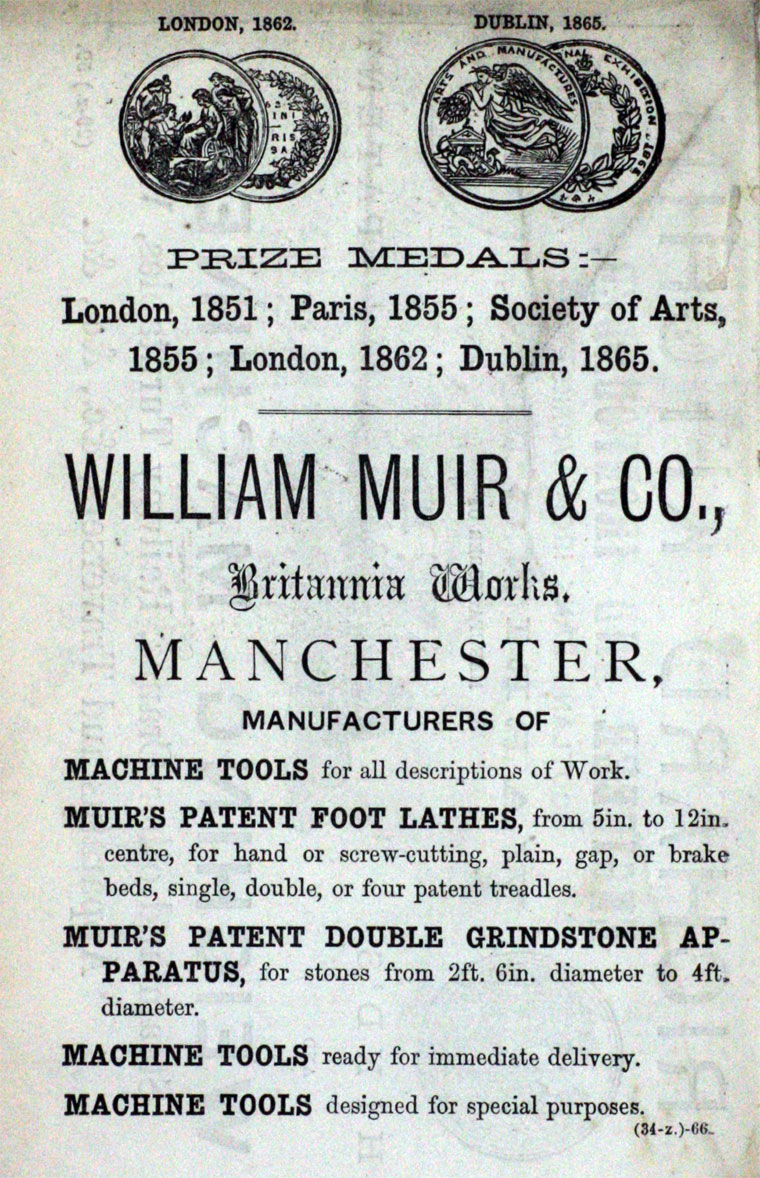 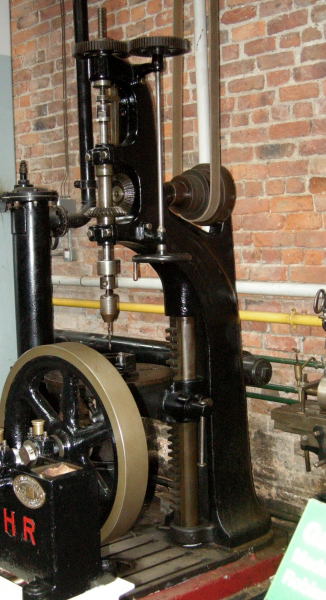 Drilling machine at Manchester's Museum of Science and Industry 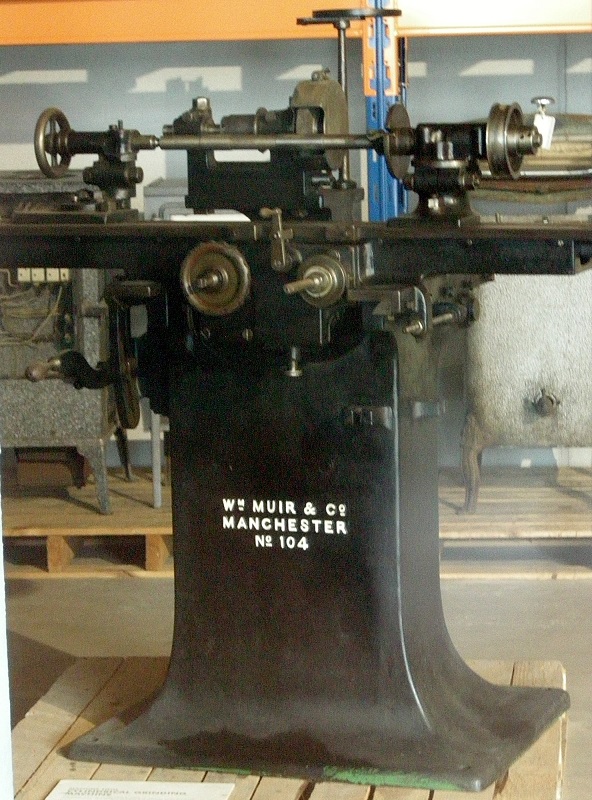 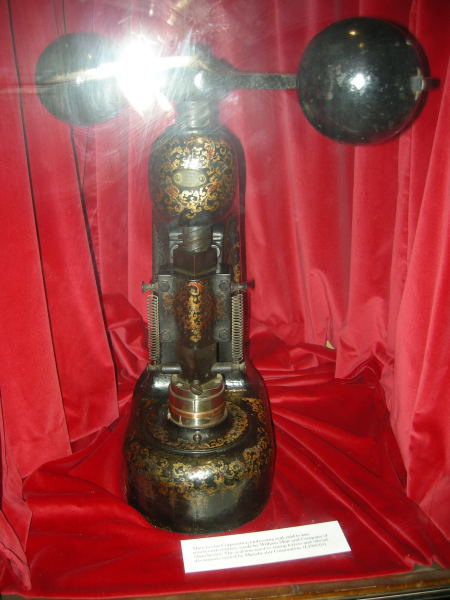 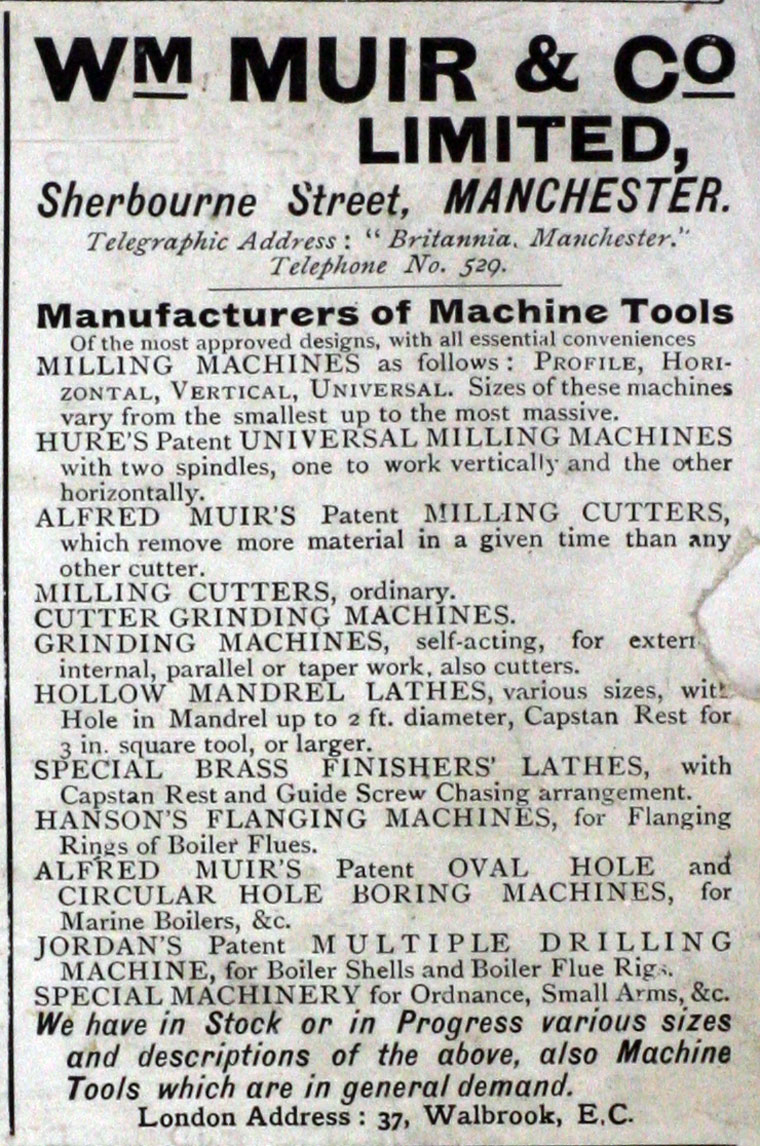 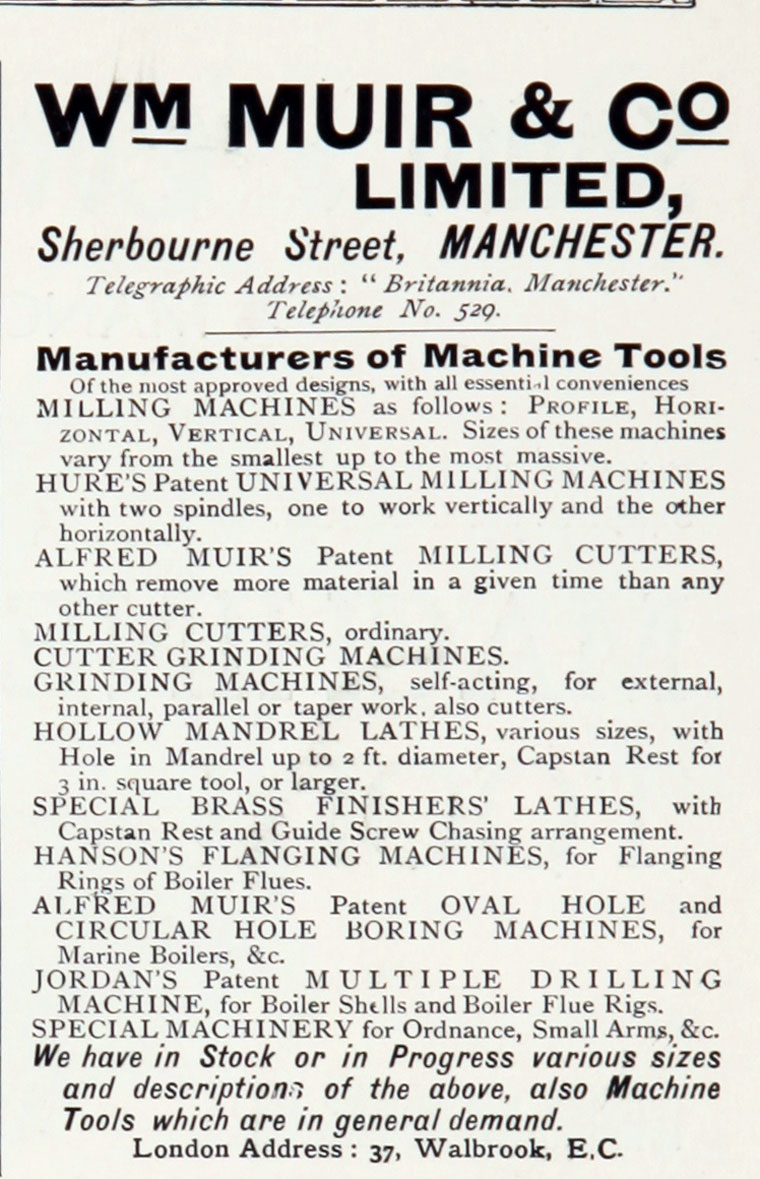 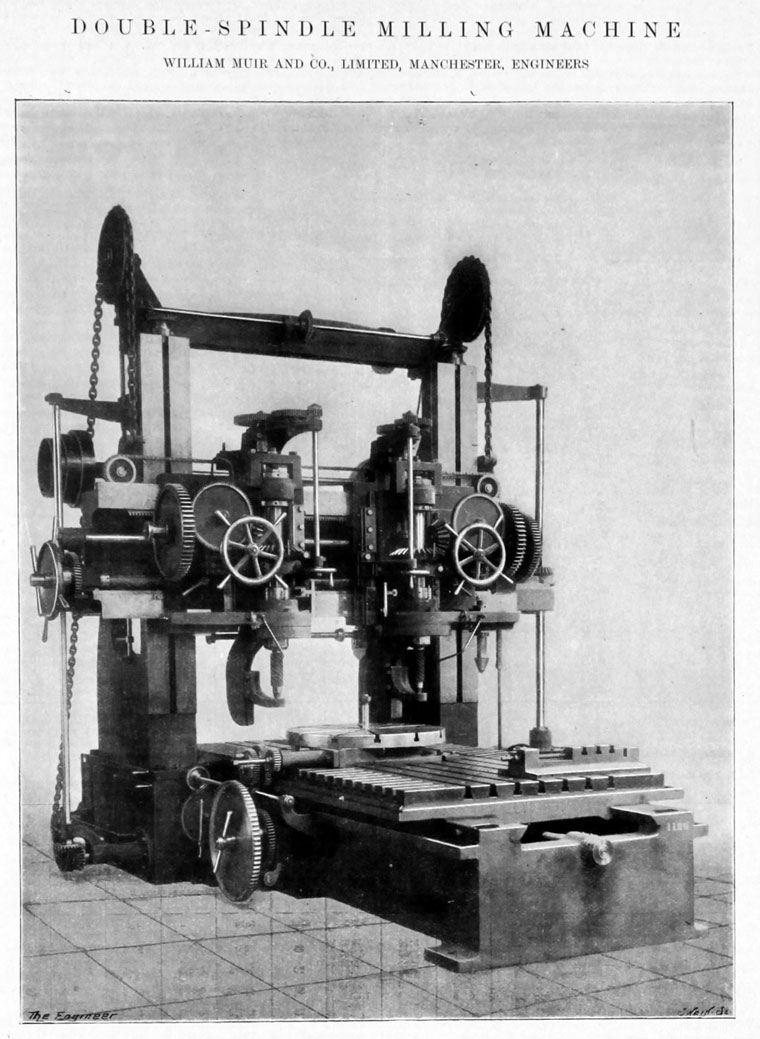 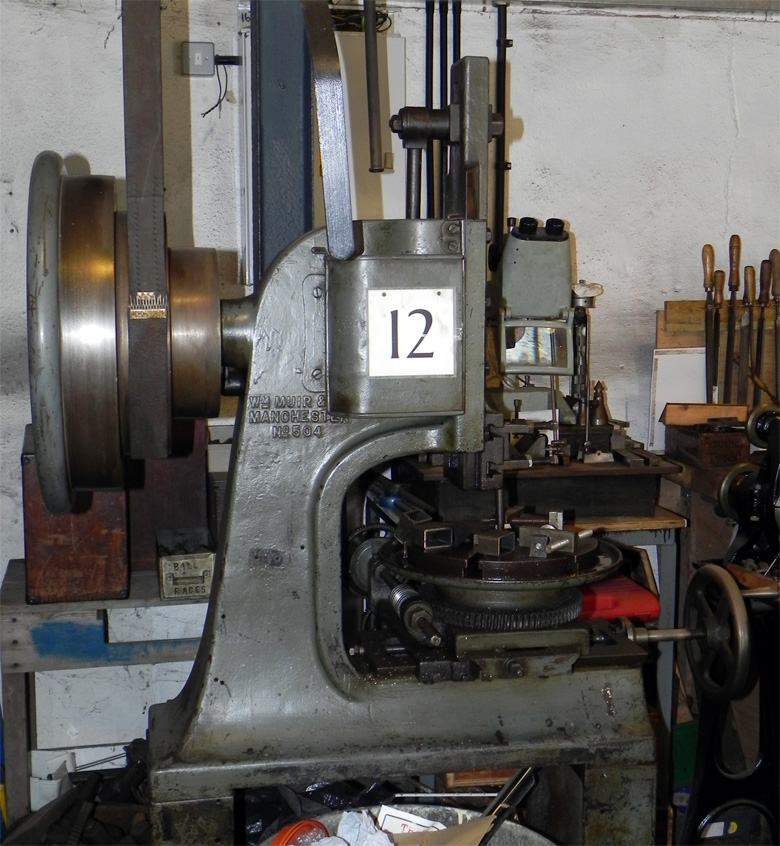 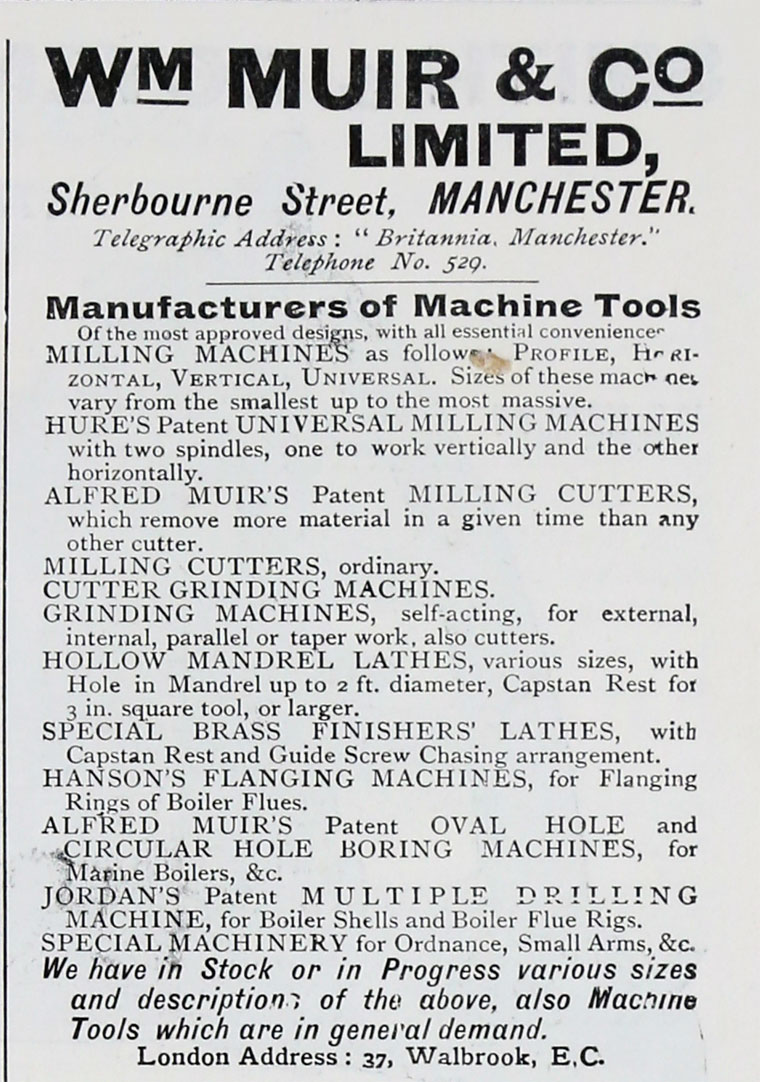 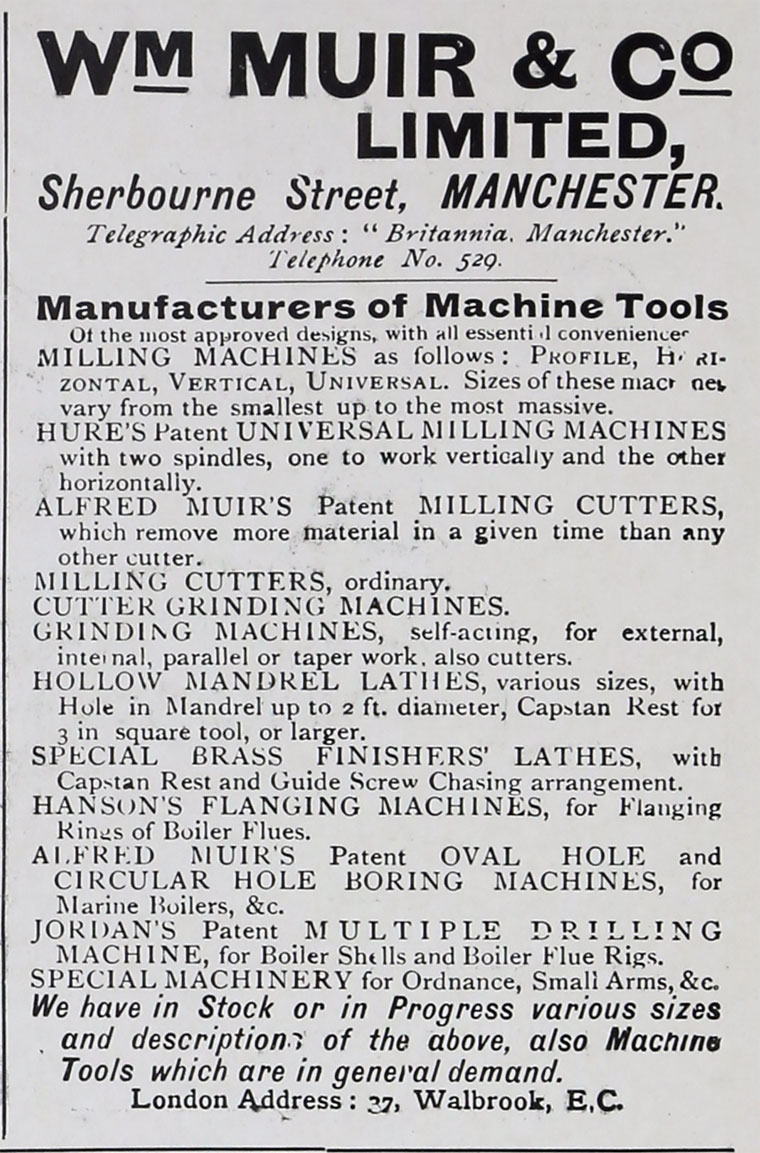 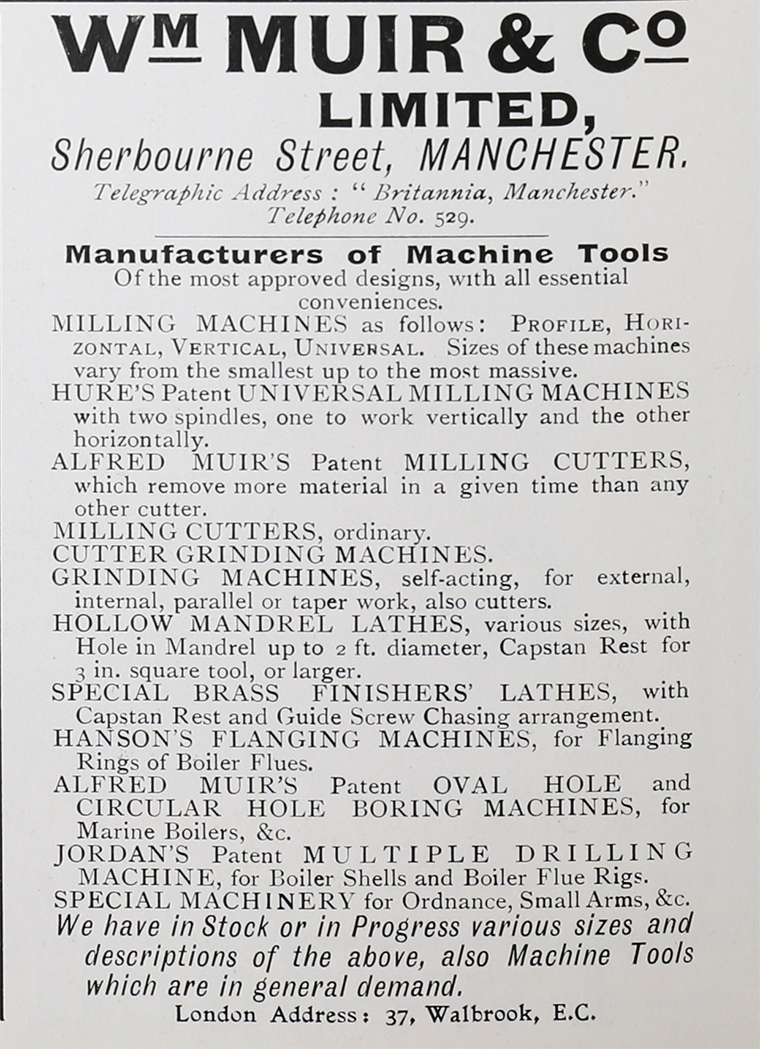 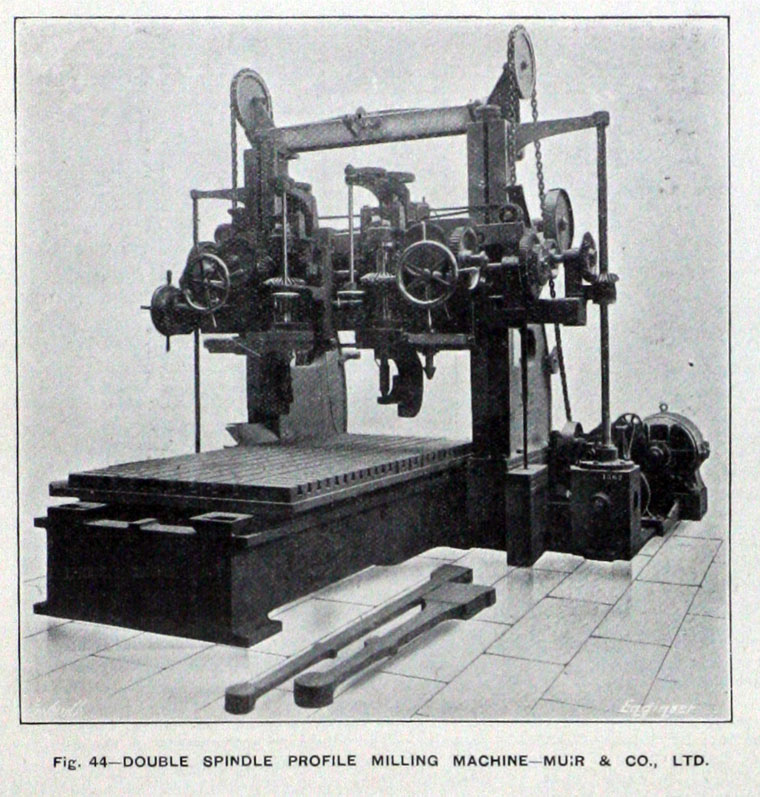 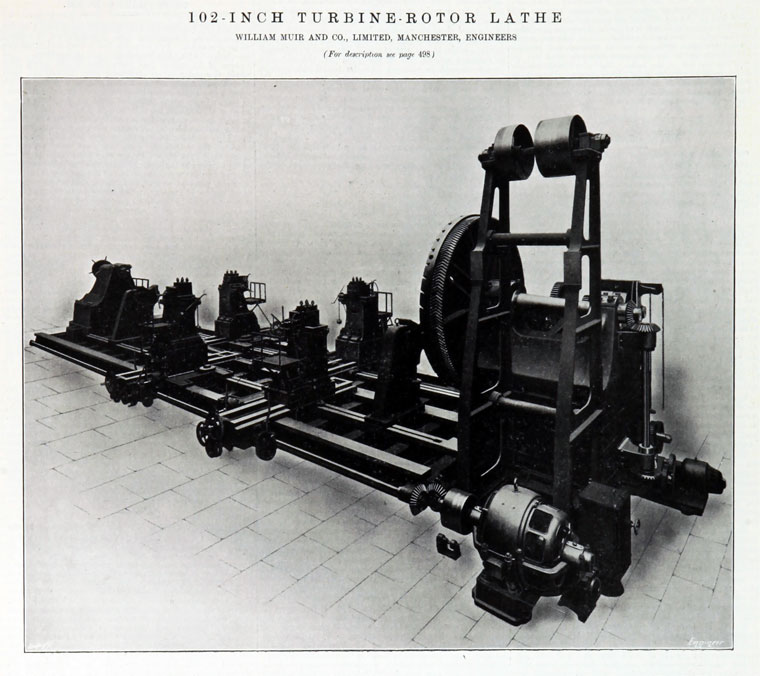 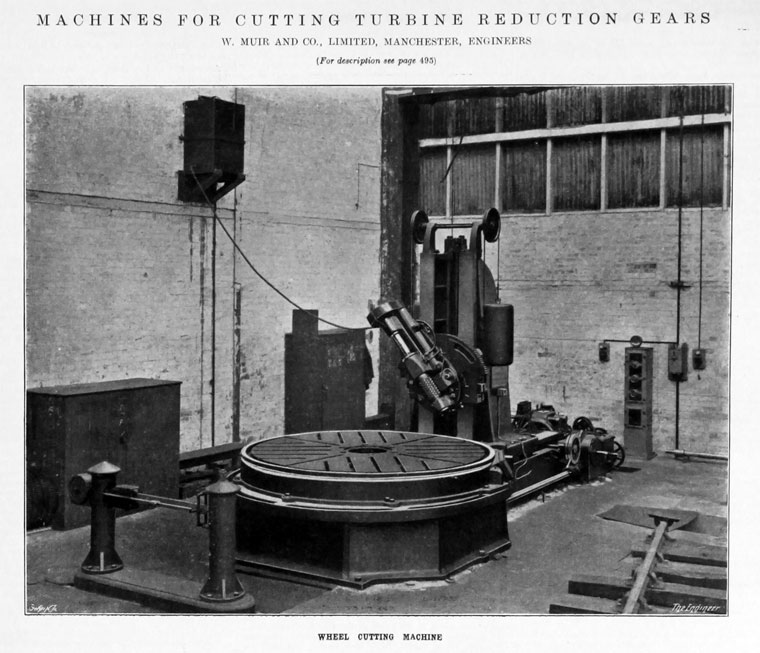 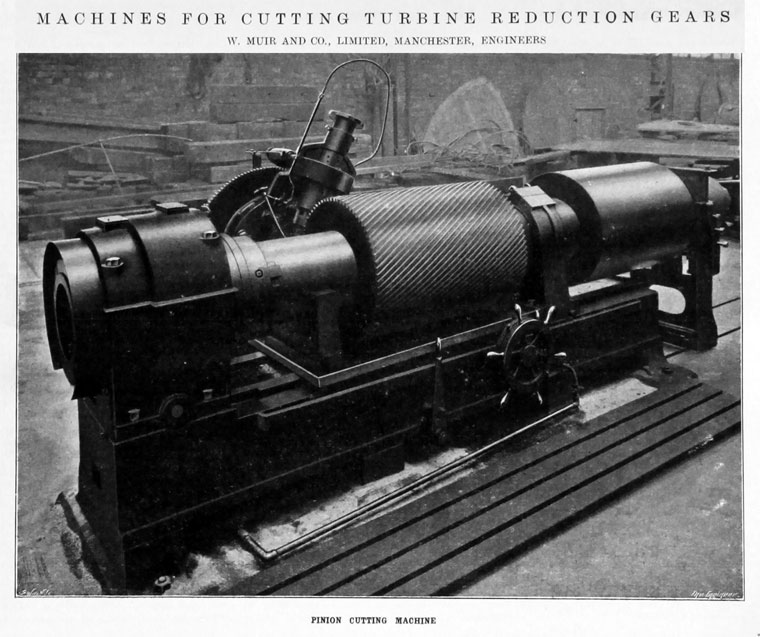 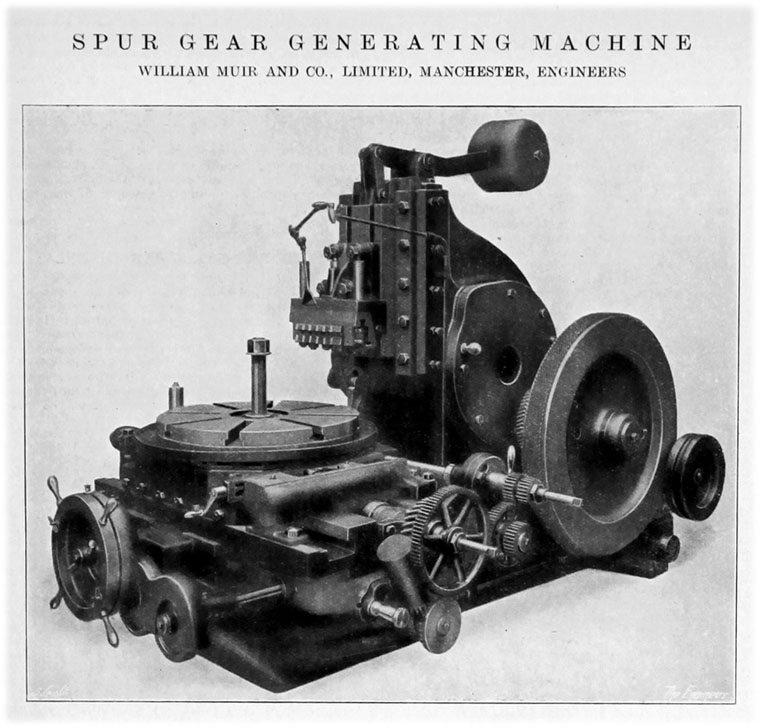 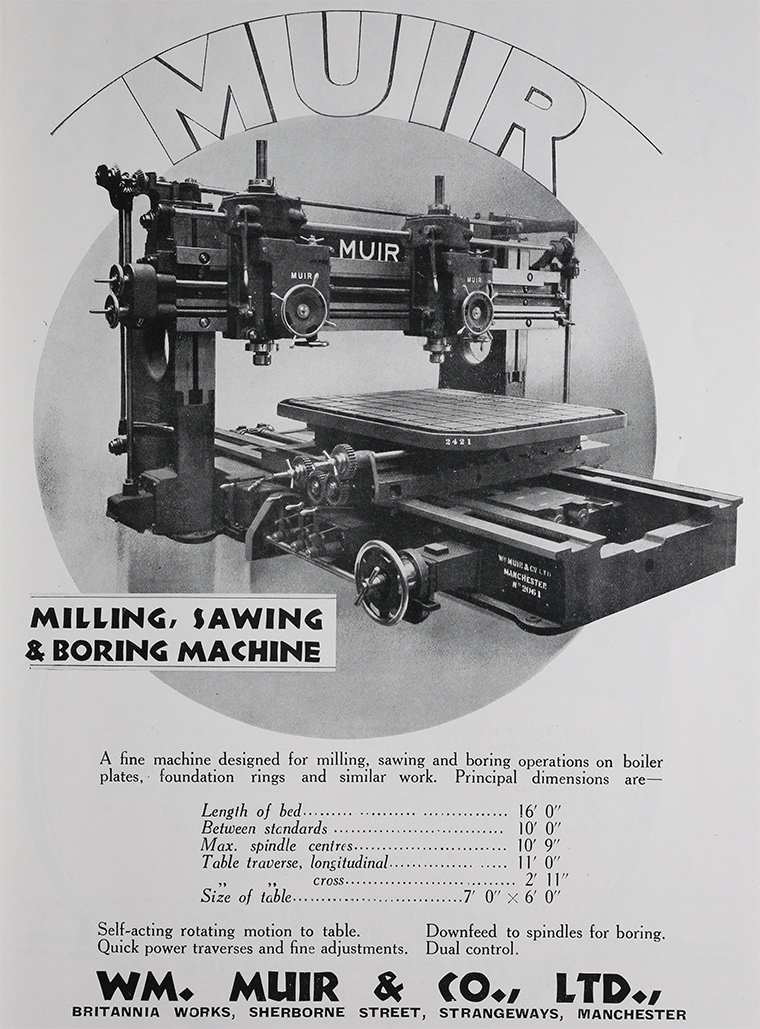 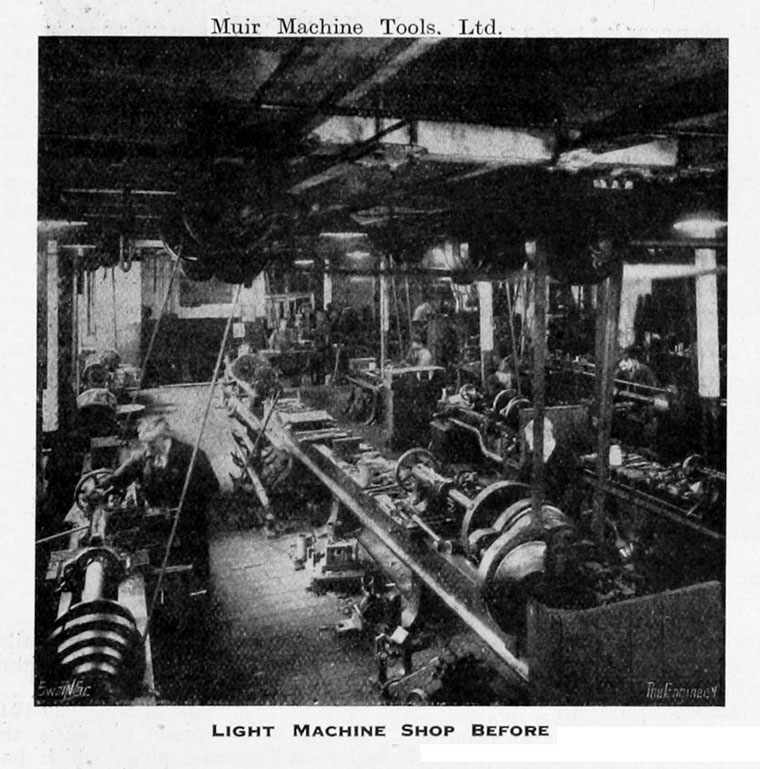 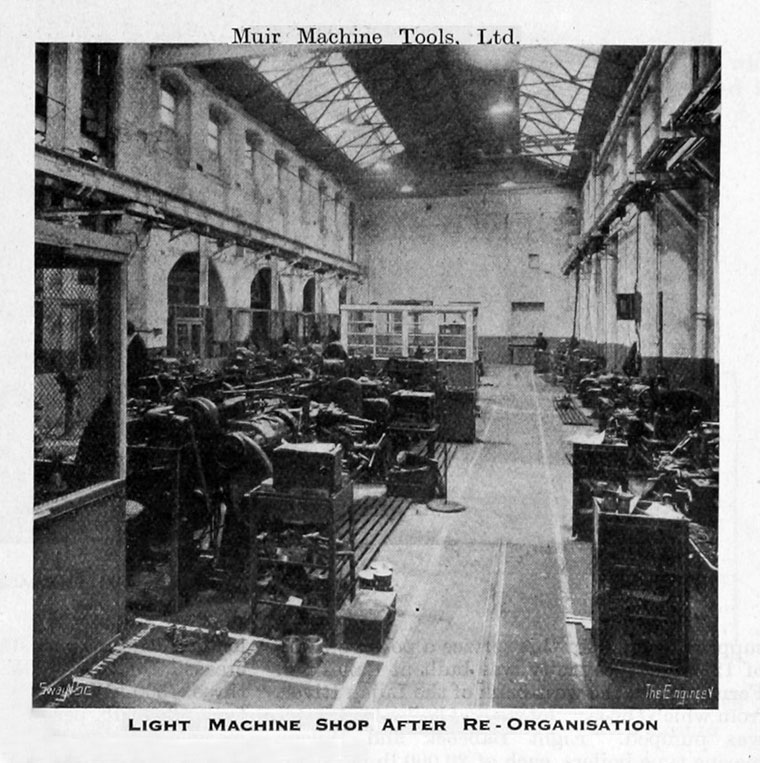 Exhibit at Geevor Tin Mine Museum. No.1688 lathe.

1842 Business established when William Muir left Whitworths in June and established a workshop in Berwick Street, Manchester, where he had room for a small forge, his lathe, and a bench.

1847 Advertising his business address as 59 Oxford Street (opposite Atlas Works), Manchester. By 1849 an upholsterer was occupying No. 59.

Outgrew his Manchester premises and then, jointly with Thomas Edmondson, Muir occupied a large building in Miller's Lane, Salford. Edmondson occupied the top floor as a Railway Ticket Printing Office; Muir manufactured the printing, dating, and other machines, as well as conducting business as a machine-tool maker. Miller's Lane was in a very old part of the City of Salford, through which the railway viaduct had been built to serve Manchester Victoria station. The lane was a short thoroughfare whose north side was defined by the viaduct, while the western end joined Greengate, and the eastern end led into a yard behind a cotton mill.

1849 advert: 'LETTER COPYING PRESSES, and EMBOSSING Ditto, Designed by WILLIAM MUIR and Manufactured under his own personal superintendence. An assortment of all sizes kept in stock. Presses fitted with Steel Dies for Initials, Address of Business Firms, & c.; also Dies and Stamps of every description, made to order. Sold Wholesale and Retail at Low Prices for cash, at the Manufactory, Millers-lane, Greengate, Salford, four minutes' walk from the Manchester Exchange.

1852 Muir was asked to supply the Woolwich Arsenal with machinery for making interchangeable rifle sights; and with business increasing, he built the Britannia Works in Sherborne Street, Strangeways, and took on partners.

1944 Acquired by David Brown and Sons.