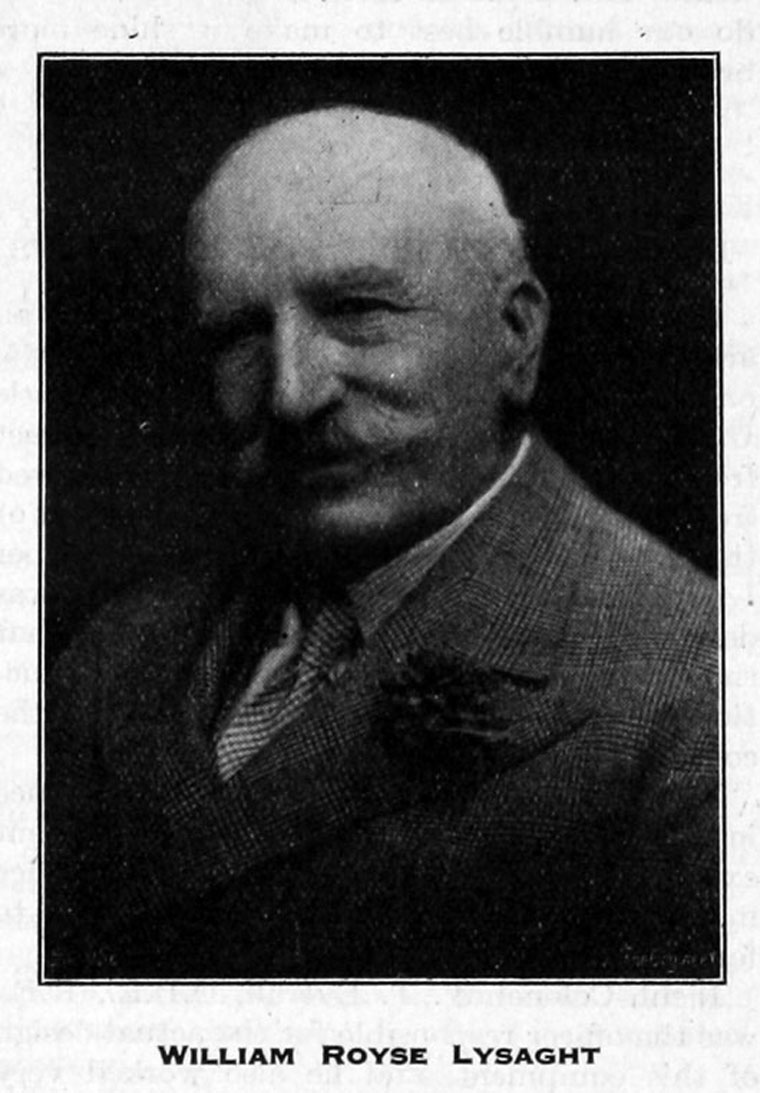 BY the death of Mr. William Royse Lysaght which took place on Friday, April 27th, at his home, Castleford, Chepstow, in his eighty-seventh year, the British steel sheet industry has lost an outstanding leader, and the firm of John Lysaght, Ltd., a sure and trusted head, who successively served as managing director, chairman, and president of the company. W. R. Lysaght was the son of the late Mr. Thomas Royse Lysaght, of Clifton and Mintinna, in County Cork, and was educated privately. He joined the firm of John Lysaght, Ltd., at Wolverhampton, in 1878. It was in that year, we may recall, that Mr. John Lysaght, his uncle, who had started a galvanising business in Bristol in 1857, bought the Swan Garden Works from Thornycroft and Co., of Wolverhampton, and the Osier Bed Works from Messrs. Sparrow. W. R. Lysaght was appointed manager of these two works, and in the subsequent history of the firm he and his cousin, Mr. D. C. Lysaght, laid out and constructed the firm's new Orb Works at Newport, Monmouthshire. Later on the Normanby Park Works at Scunthorpe, Lincolnshire, were built, in order to supply steel bars for the steel sheet mills at Newport. The move from Wolverhampton to Newport was made in 1898, owing to the great increase in the use of steel sheet, and eventually fifty sheet mills were running at the Newport works. The firm was also responsible for a remarkable development in Australia, where for some time the whole of the steel sheet requirements of the Commonwealth have been supplied from the Lysaght works at Newcastle and Port Kembla.

From the very beginning of this large and important business undertaking, Mr. W. R . Lysaght associated himself in the closest way with his staff and the men in his works. He knew intimately all in his works, and was looked upon rather as a father than an employer. In 1928, when he had completed fifty years with the company, the workmen entertained him to dinner to celebrate his jubilee. At that dinner he recalled the bad days of unemployment in the Staffordshire iron and steel industry and the improvements which had since taken place. His under-standing of his men engendered a mutual trust, and during his long career there was no labour trouble at his works. Some years ago his work people paid a tribute to him by erecting at Newport the W. R. Lysaght Memorial Institute.

For nearly forty years he was a member of the Midland Wages Board, and for a quarter of a century acted as Chairman of the Sheet Trade Committee. He was associated with several other steel firms, and was chairman of Joseph Sankey and Sons, Ltd., and a director of Bayliss, Jones and Bayliss, the London board of Broken Hill Proprietary, Ltd., Guest, Keen and Nettlefolds, Ltd., and John Carrington and Sons, Ltd. He became a member of the Iron and Steel Institute in 1888, and served as President for two years from 1933 to 1935. In September, 1934, he led the very successful visit of the Iron and Steel Institute to Belgium and Luxembourg.

In January, 1940, he resigned from the offices of chairman and managing director, after nearly sixty years with the firm. Sir David Llewellyn, the deputy chairman, was elected chairman and managing director, and Mr. Samuel R. Beale, the chairman of Guest, Keen and Nettlefolds, was appointed deputy chairman. Later, Sir Samuel became chairman. In view of Mr. W. R. Lysaght's great experience and knowledge, his directors asked him to continue his association with the firm in the capacity of president, which he continued to do until his death.

During the last war he served with the Ministry of Munitions, and in recognition of his work was awarded the C.B.E. at the close of the war. In 1915 he was appointed High Sheriff of Monmouthshire, and later became Deputy Lieutenant. In 1936 he was made an Honorary Freeman of the County Borough of Newport, in appreciation of the help he had given to the town of Newport. He also gained the thanks of Monmouthshire by his action in preserving the historic Chepstow Castle, and making it accessible to the public. This bare summary of his activities fails to do full justice to one of the outstanding characters in the iron and steel industries. He was, as his old friend Sir Samuel Beale has well said, "one of those generous personalities whose capacity for leadership contributed so much to the welfare and prosperity of this country." Whilst he avoided publicity, he was a friend to all those with whom he was associated in business, and, as he showed during his Presidency of the Iron and Steel Institute, had that personal charm that made strangers desire his acquaintance.