October 1907. The Napier and Iris cars in the Private Stakes. 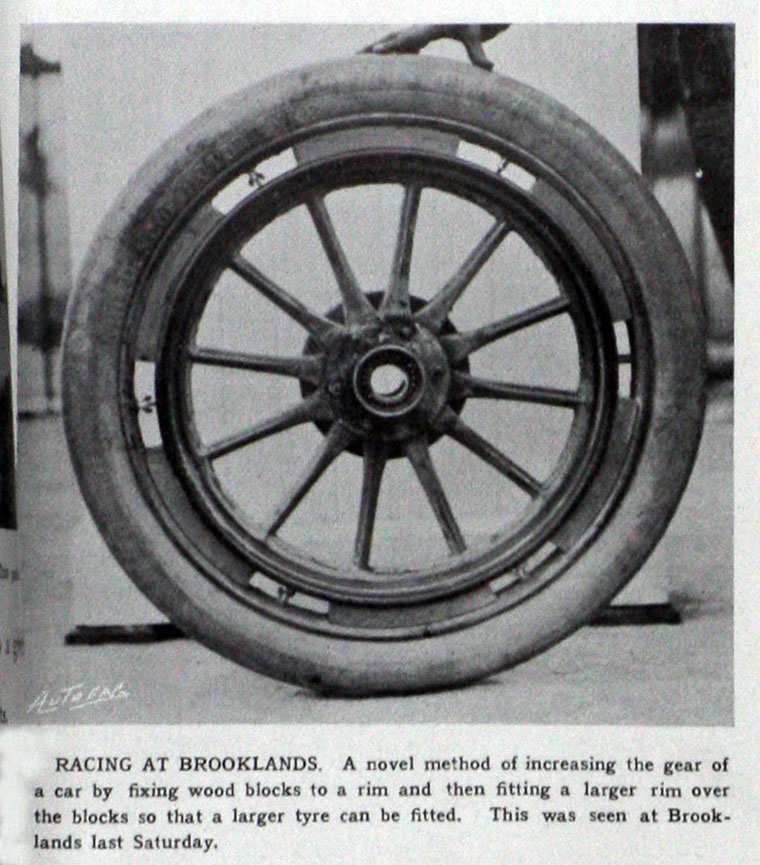 October 1907. The crowd moving to watch the race.

The 5th race meeting at Brooklands took place on the 12th October 1907. Attendance was 7,000 persons.

Persons named in this article

Automobiles named in this article

The fifth open meeting promoted by the Brooklands Automobile Racing Club was officially stated to be the last of the present year, although at one time it was anticipated that arrangements would be made so that visitors to the Olympia Show might see a race meeting. The promoters were again favoured with good weather, and although the attendance was not so large as desirable, yet the interest in the racing was very keen. Now that the general public are beginning to know the merits of the various cars much more excitement is manifested over their doings.

At this meeting no cars were allowed to compete without having exhaust boxes fitted. This was a decided improvement so far as the comfort of those in the enclosure was concerned. A new arrangement was made for filling the petrol tanks of competitors, the filling apparatus being arranged alongside the road leading to the enclosure from beneath the track. Six races formed the programme of the afternoon, and they were run off with commendable promptitude. The first race began at two o'clock, and the last at four, that not much time was lost. However, between the third and fourth race there seemed rather a long delay.

Several new designs were seen for the first time at Brooklands. The Deasy, the new four-cylinder Napier, the Britannia, and the Dennis. Only the Napier tasted the sweets of a first victory.

The new arrangement of marking the track in conjunction with the regulations for the drivers worked very well. There was no sign of difficulty in pulling up and keeping within the prescribed lines. The run back into the enclosure was also a great improvement over the old arrangement.

2.0.— The MEDIUM HANDICAP SWEEPSTAKES of 10 sovs., for acceptors. (The entrant of the second to receive one-quarter of the stakes.) For motor cars propelled by means of internal combustion engines only, of a cylinder dimension 104 to under 122. Weight, 2,700 lbs. Entrance, 10 sovs. Distance, about 5 miles.

An interesting entrant, for this event, was the 48.6 h.p. Brasier, which won the last Gordon-Bennett race. At the last moment it was discovered that the magneto driving wheel had gone wrong, and thus the car could not start. This was most disappointing to those present, who would have been interested to see how this car compared with the later designs competing in the same heat.

The Darracq got away with a lead, but the Metallurgique, driven magnificently by Cupper, came away and won readily from the Pipe, the Darracq being third. Cupper won by thirty yards, and the Darracq was fifty yards behind the Pipe.

The start was at the finishing line, and this position for starting was much approved by the spectators. The Arrol-Johnston as quickest away, closely followed by the Humber, the Napier hanging back, apparently to get a better position than the inside, shortly after passing the bend it was seen that the preliminary slowness of the Napier was only tactical, as coming along on the outside it began to rapidly overhaul its competitors. The result was a ding-dong finish between the Napier and Metallurgique; the former gained the verdict by a few yards, about fifty yards separating second and third. Immediately after turning the first bend, Tuck, the driver of the Humber car, unfortunately strained the striking portion of the top gear lever, and thus could not get the top gear into action. His chance of winning the race was therefore exceedingly remote, and his position at the bottom of the list is thus explained.

2.45.— The OCTOBER HANDICAP SWEEPSTAKES of 10 sovs. for acceptors. (The entrant of the second to receive one-quarter of the stakes.) For motor cars propelled by means of internal combustion engines only, of a cylinder dimension of 150 or over. Weight; 2,900 lbs. Entrance, 10 sovs. Distance, about 5.25 miles.

This race was a gift for the Mercedês, as D. Resta caught the Napiers very early, and finally won by half the length of the straight, whilst twice the distance separated second and third.

The winning Napier led at the bend, whilst the Napier which ultimately took third place was moving faster than the Metallurgique. However, on settling down to stern racing, Newton won in good style by over 100 yards. Cupper beat Smith for second place after an excellent tussle, the distance between the two at the finish being greater than appeared at one time probable. Wentworth was declared a non-starter.

The winner's average speed was 73 m.p.h.

The Iris was quickest away, although the Napier was first at the bend. The Dennis seemed to start very slow, and lost much ground in the first half-mile. The Napier and Iris ran for the whole distance practically locked together, but coming up the finishing straight the Napier seemed to have a lead of fifteen to twenty yards. Fifty yards from the finishing line the Iris put on a magnificent spurt for about twenty yards, which reminded us of that which the Napier put on against the Iris at it previous meeting. The effort, however, was not sustained, and the Napier won by a short length. This was the most exciting race of the day, and created great enthusiasm among the spectators. The Dennis finished half a mile behind, pulling up with a leaky petrol pipe.

There were six entries for this event, but only three faced the starter. The Mercedes got the lead immediately after the start, and the second time of passing the bend at the members' bridge was leading by a quarter of a mile from the Fiat, the Hotchkiss being a short distance further behind. This order was maintained until the final passing of the fork, when the driver of the Fiat, instead of running straight into the bend, went on for another lap, the result being that the Hotchkiss was placed second, although really it should have been third, over a mile behind the winner. The admirable running of the Mercedes will be gauged by the fact that it was never seriously troubled by the other two.

The Hotchkiss appeared to only fire on three cylinders at parts of the circuit.

NOTE.—The h.p. of all the cars is calculated on the R.A.C. D2N/2.5 formula, the stroke not being taken into account.

In accordance with the usual practice, a number of the cars which competed in the races on October 12th were officially measured. The following is a list of such cars, with the official measurements:

Official samples of the petrol used by various competitors were also taken; these will be submitted to chemical analysis, and the results published at a later date.