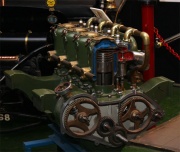 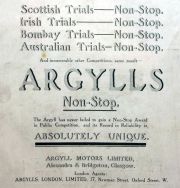 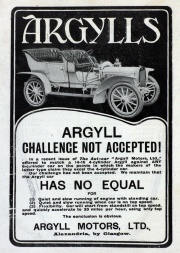 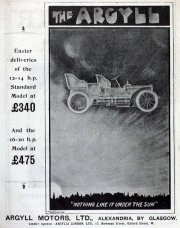 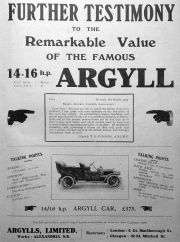 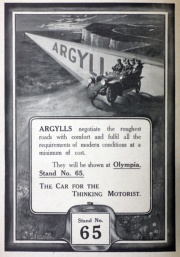 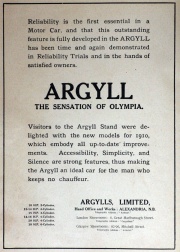 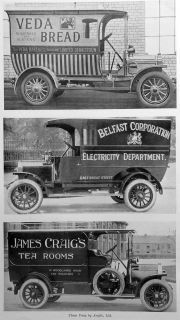 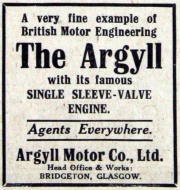 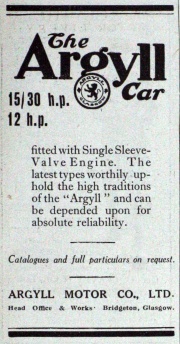 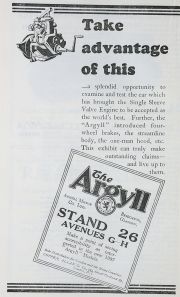 Argyll was a Scottish motor car marque manufactured from 1899 to 1932.

1905 March 11th. Argyll Motors was registered to take over as a going concern the Hozier Engineering Co. [1]

1905 Opened large factory at Alexandria[3] and retained the old Bridgton premises as a repair and service depot under A. Morris Thomson.

1906 August. Report of a drive from Glasgow to London in an Argyll by Eustace H. Watson.[4]

The Alexandria factory was never used to capacity, and the company began to decline after Alex Govan's death in 1907 and then went into liquidation in 1908.

1910 Production restarted with a new range of cars including the famed "Flying Fifteen", and a six-cylinder model. The 12/14 was widely sold as a taxi even being exported to New York. Four-wheel brakes designed by J. M. Rubury of Argyll and patented on 18th March 1910 by Henri Perrot and John Meredith Rubury (Patent number 6807) were available from 1911 on.

The Knight and Kilbourne Patents Co brought a case against Argylls for infringement of their original 1905 patent. This patent described an engine with a single moving sleeve. As part of the litigation an engine was built according to the 1905 specification and developed no more than a fraction of the rated RAC horsepower. This fact coupled with other legal and technical arguments led the judge to rule, at the end of July 1912, that the holders of the original Knight patent could not be supported in their claim that it gave them master rights encompassing the Argyll design. It is reported that litigation by the owners of the Knight patents cost Argyll ₤50,000, perhaps one of the reasons for the temporary shutdown of their plant.

1914 Argyll changed hands and the Alexandria factory was sold to the Royal Navy for torpedo production.

Car production was resumed on a small scale in the original Bridgeton works under the control of John Brimlow who had previously run the repair department. The first product from the new company was a revival of the pre-war 15·9 hp model, now with electric starter but few were sold.

1927 The company made a final appearance at the London Motor Show and the last cars were probably made in 1928.

The company though still advertised until Argyll closed in 1932.