Grace's Guide is the leading source of historical information on industry and manufacturing in Britain. This web publication contains 149,947 pages of information and 235,419 images on early companies, their products and the people who designed and built them. 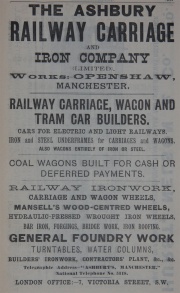 The business was established by John Ashbury in central Manchester, and moved to the suburb of Openshaw in 1847.

1876 A very small railway carriage, 9 ft long, built for the Ffestiniog Railway was paraded through Manchester in the May Day procession. [3]

1878 'Railway Carriages for the Imperial Family of Russia. The Ashbury Railway Carriage and Iron Company Limited, Openshaw, have just completed two saloon carriages for the Imperial family of Russia, and which will be principally used by the Grand Duke Michael and his consort, on the Poti-Tiflis Railway. The length of each carriage is 29ft. 2 1/2in., and 10ft. wide, and 8ft. 8 1/2in. high from the floor to the roof. Both contain travelling and dining saloons, lavatory, retiring rooms, sleeping compartments, and other conveniences, all fitted up in the most magnificent style. The carriages have been built from the design and under the superintendence of Colonel Wm. d'Alton Mann, and the work is extremely creditable to the builders.'[4]

1884 A large modular cast iron railway water tank, standing on eight cast iron columns, has survived at the site of St Mary's railway station in Tasmania. Made by Ashbury's in 1884 [6]

1887 'The New Railway Viaduct at Ancoats. The new viaduct constructed by the Midland Railway Company at Ancoats was inspected by Major Marindin for the Board of Trade yesterday, and after exhaustive tests of every part, it was pronounced by him to be very satisfactory and ready for passenger traffic. Messrs. John Etheridge and Co., of this city, carried out the work. The Ashbury Railway Carriage and Iron Company, of Openshaw, made and erected the iron bridges.' [7]. This is the presumably the bridge which crossed the valley of the River Medlock near Ancoats Bridge, having plate girders with three sets of eight cast iron columns as intermediate supports.[8]

1899 'THE CENTRAL LONDON LINE. CARRIAGES FROM MANCHESTER. The Central London Railway is now rapidly approaching completion. There have been many complaints in the city of Loudon owing to the block caused by the company through their works underneath the streets of Cheapside, Newgate-street and Oxford-street, by which the traffic was so much blocked: this will now very shortly be over. There was a very interesting trial yesterday at the works of the Ashbury Railway Carriage and Iron Company Limited, Manchester, when the Chairman (Sir J. W. Maclure. Bart., M. P.), the general manager of the company, Mr. Charlton, and other officers of the company started the first carriage out of 125 carriages ordered for this important undertaking. The trial was most successful. In order to secure every point, the carriage will run over the North-Eastern system for some days. The design of the carriages to all appearance is perfect for the special traffic of the line of this character, which is a deviation from the present systems, as is entirely worked and lighted by electricity. Travellers on underground railways generally by this system will be relieved of nine-tenths of the fouling of the air, and at the same time attain an equal, if not a higher, speed of travelling. The names of Sir Henry Oakley and Sir Richard Farrant will ever associated with this company, and from their experience it is believed they are conferring great benefits on the metropolis.' [9]