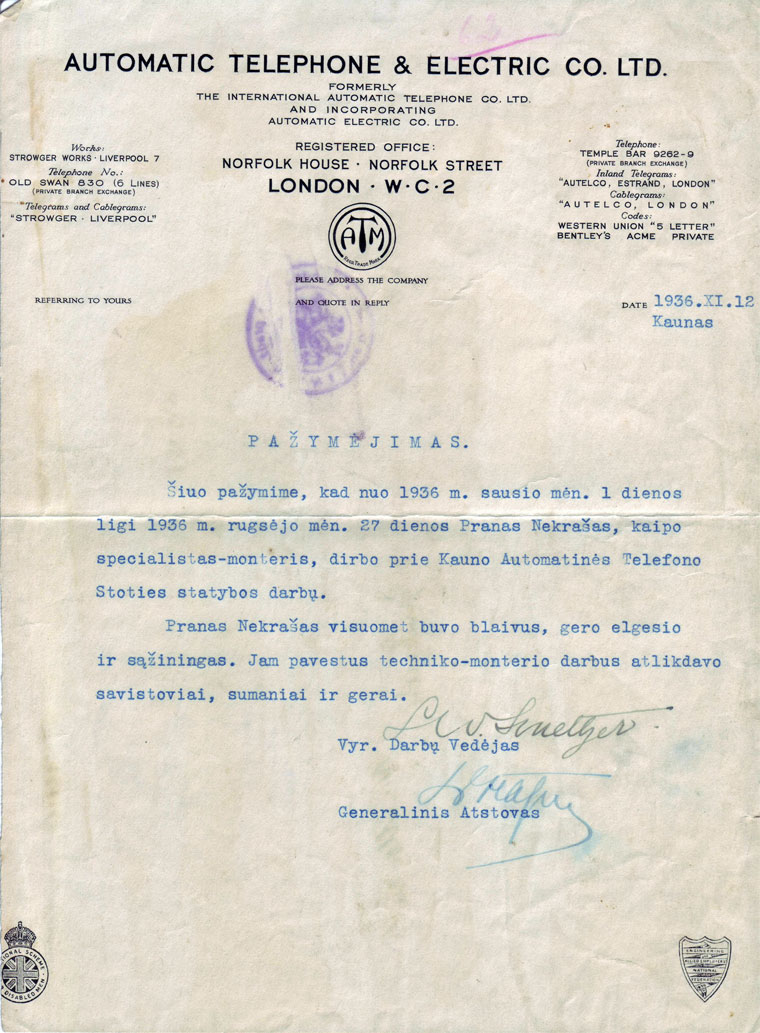 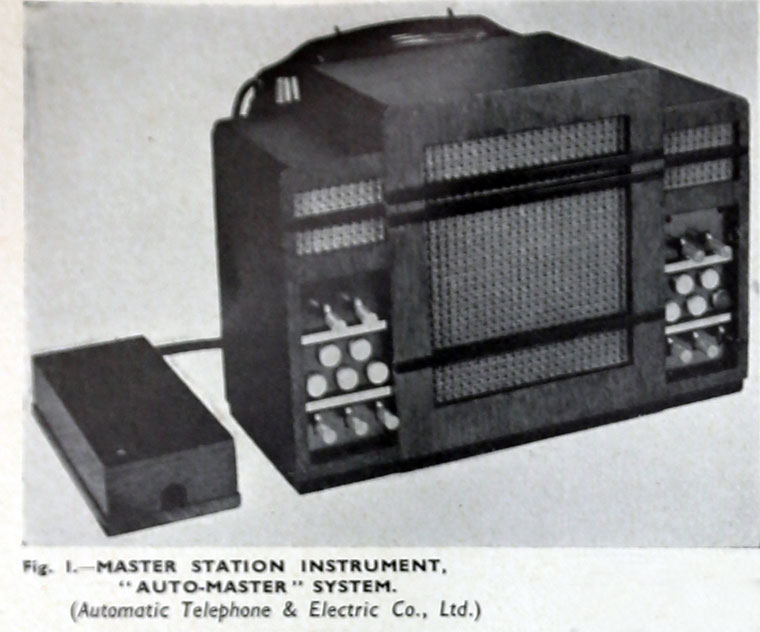 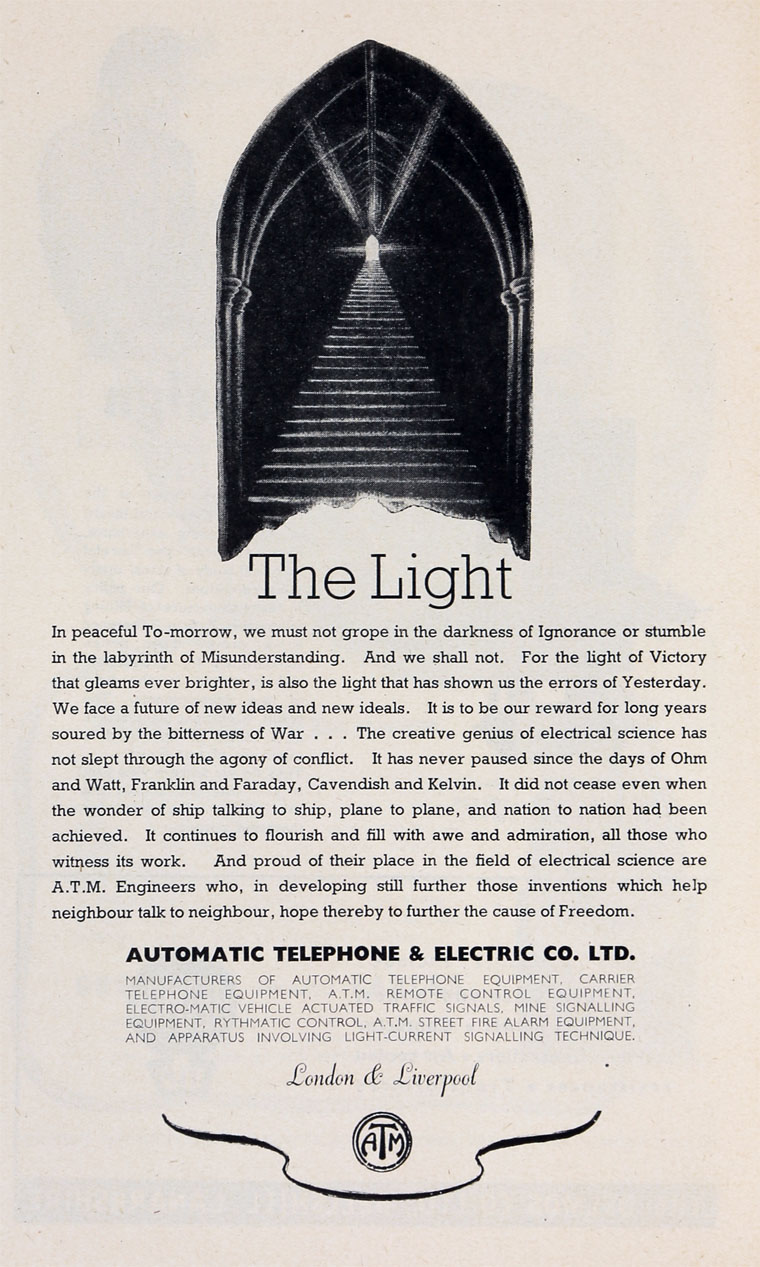 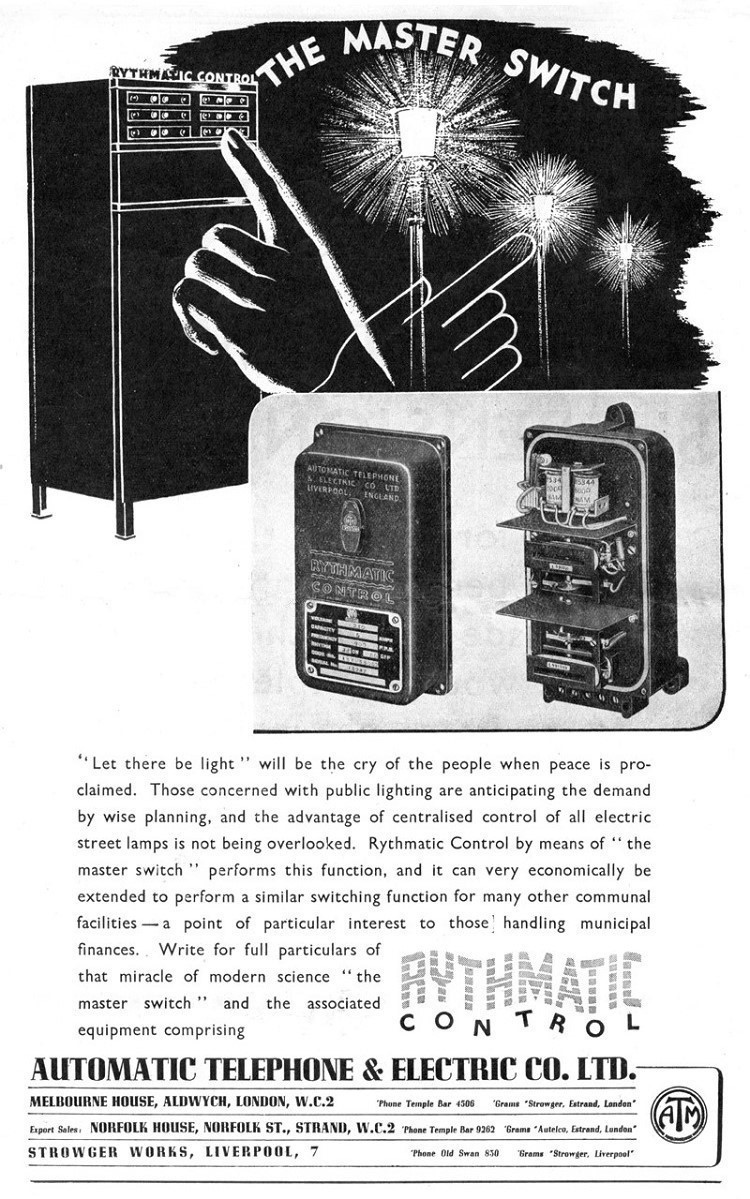 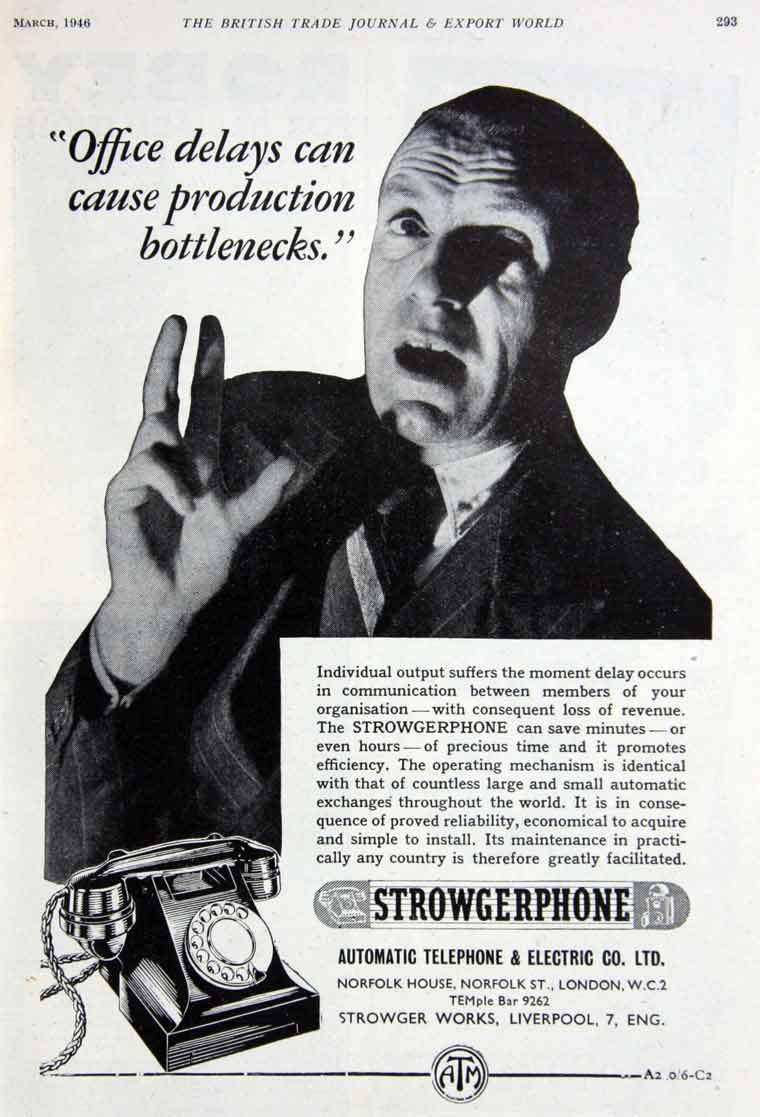 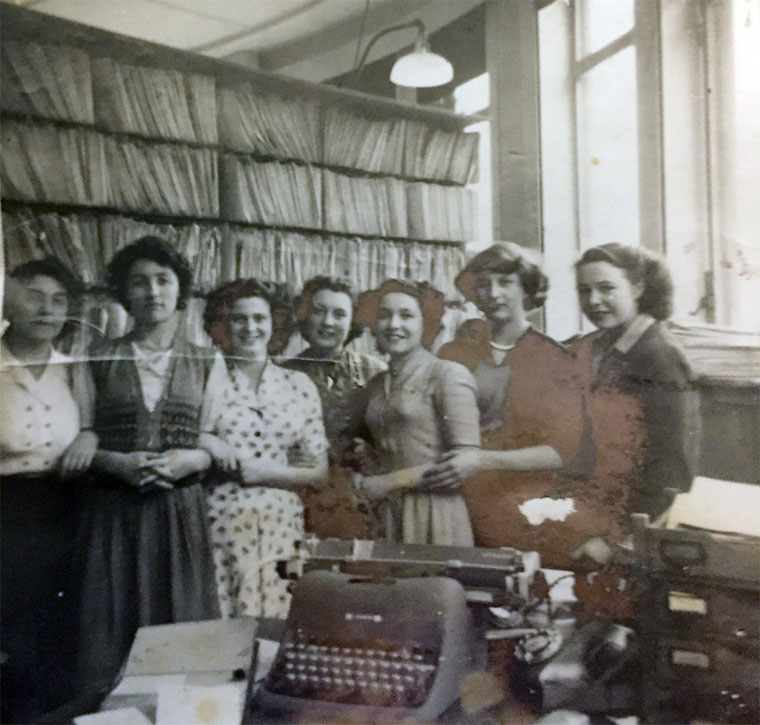 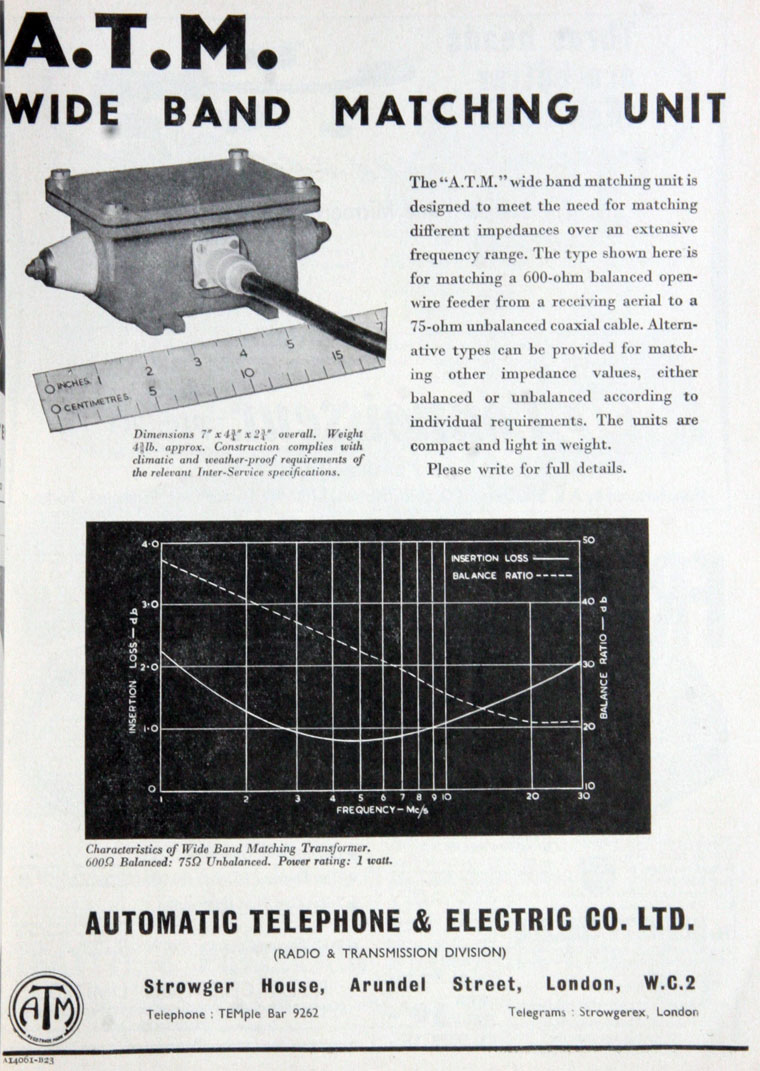 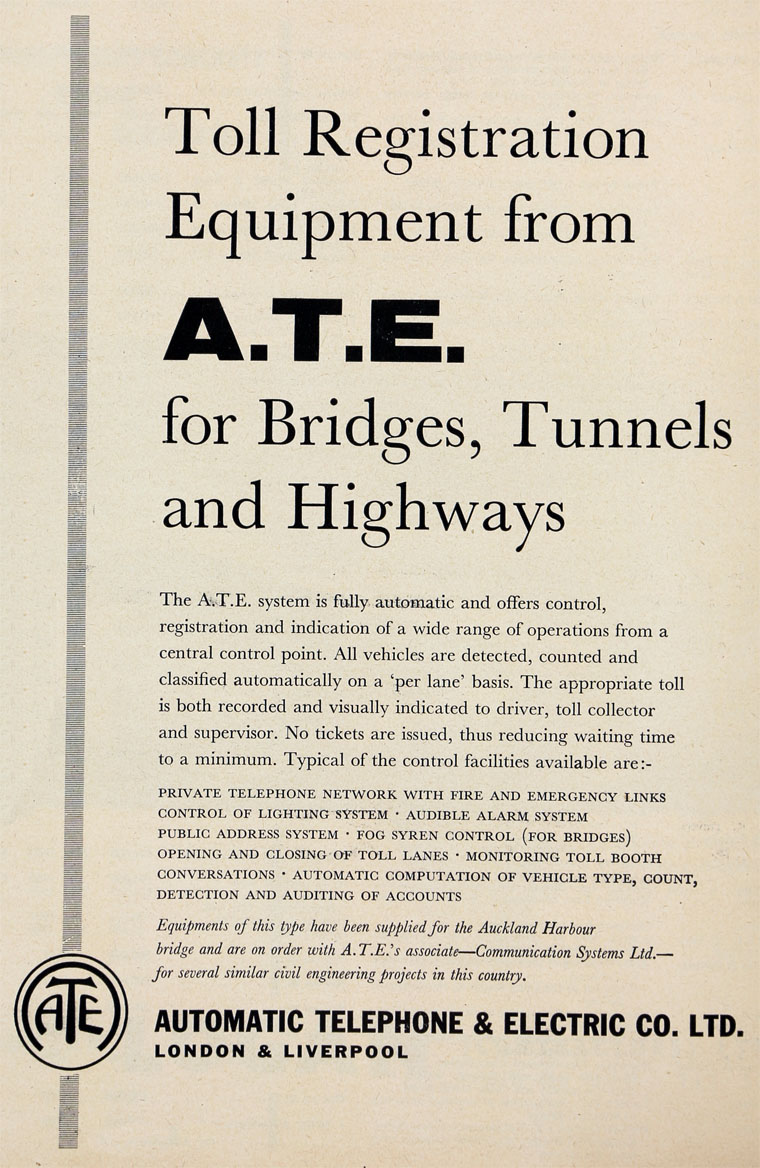 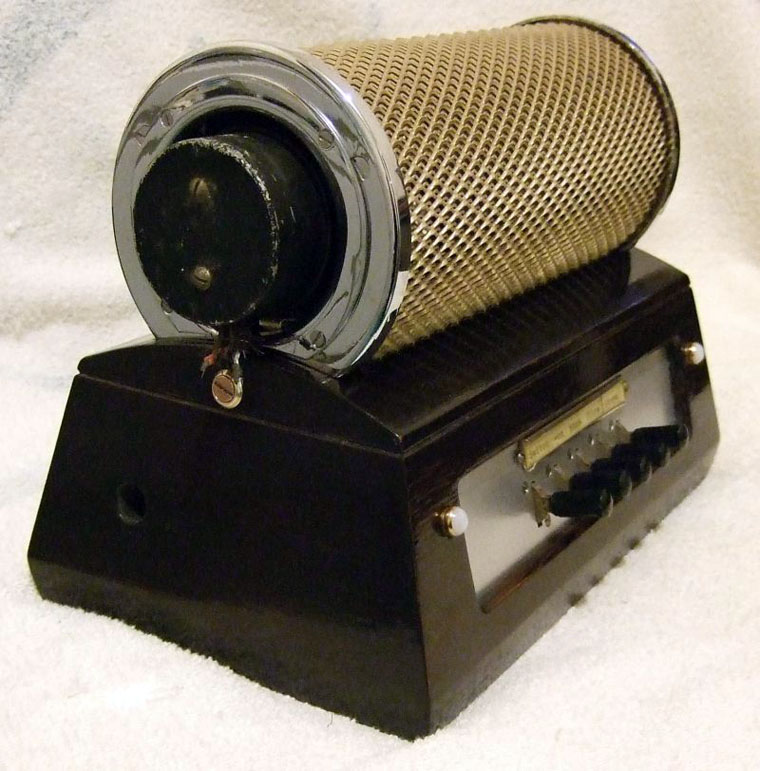 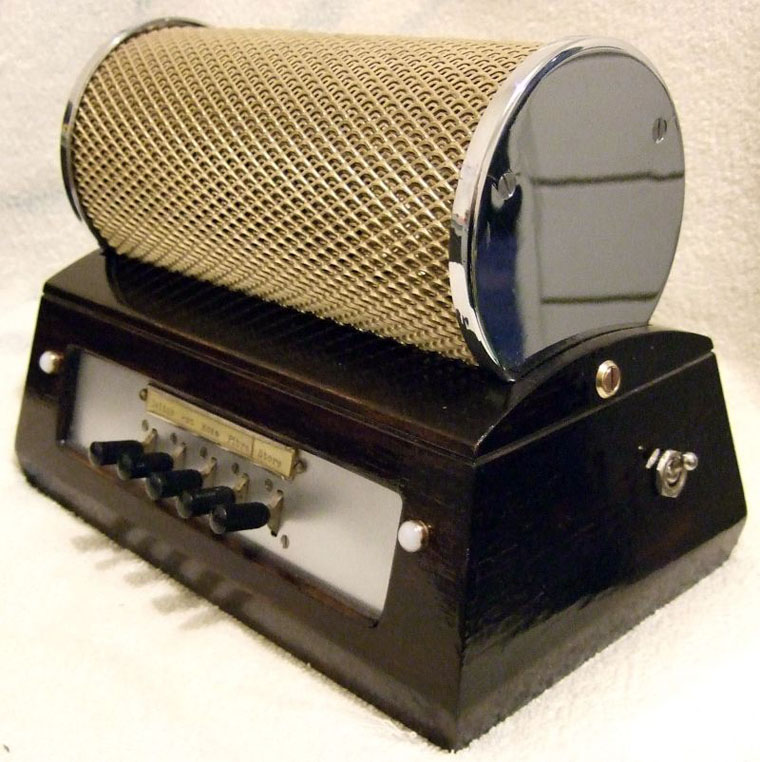 1939 Automatic Telephone and Electric Co took a controlling interest in Hivac as basis for facilities for electronic development in telecommunications[3].

1958 Establishment of a joint company with Ericsson Telephones and English Electric Co to develop and manufacture transistors in greater quantities[7][8] called Associated Transistors[9].

1959 Automatic Telephone and Electric Co became the prime contractor for a new UK air defence system, under the code name Project Linesman. The best staff from ATE Edge Lane were moved to a new building in Cheapside in Liverpool city centre; to maintain secrecy, this was called Exchange Works. Young employeees were granted exemption from conscription. The task was to design and manufacture the data processing system for Linesman, which meant designing the system, designing the computers, developing software (which included a new high level language) and manufacturing the hardware (something like 1,000 racks of equipment). The first computer was developed with RSRE Malvern using neon tubes and valves. This was later developed into the XL2 (the XL standing for Exchange Laboratories)[10] built entirely of germanium transistors and using a computer language developed at Exchange Works in the 1950s and 60s. The finished data processing system was installed at West Drayton; this used the XL4, a more powerful machine, and a few XL6 machines developed later. The radar was by Metropolitan-Vickers and Marconi[11]. The secure status of the factory later attracted other secret contracts (under Plessey) and led to it becoming one of the major designers and manufacturers of cryptographic equipment[12].

1960 New products being developed outside the traditional areas of business but based on the telecommunications expertise of the company, with applications in road and air traffic control, data processing, instrumentation[13]

1961 Merged with Plessey and the Ericsson Telephones. As a result, Plessey doubled in size, becoming Britain's largest manufacturer of telecommunications equipment (including the majority of the country's crossbar switches / exchanges).

As Linesman was being completed Plessey developed a silicon based computer, XL9, for commercial use, using the mini-Coral language; this was sold to various users including for a wide area traffic light control in Liverpool, an air defence system for Burma, a message switch comprising five XL9s together with lots of communications interfaces for GCHQ, and an accounting system for the GPO for a West London telephone exchange. This was followed by XL12, a really powerful computer, development of which was halted when ICL ?? was formed. Having determined there might be a requirement for a new telecoms computer, development restarted on a computer aimed at the telephone exchange market, specifically for the Australian market. Three computers, manufactured at Exchange Works, working in a redundant system were successfully demonstrated. These were quite unusual as their instruction sets were designed around the requirements of a telephone exchange. Immediately after this, the PP250 was designed, aimed at military communications systems. These were manufactured at the new Plessey Christchurch site for the Ptarmigan communications system.

You mention 3 computers manufactured at Exchange works being aimed at an Australian telephony market. I worked on those and can add a few more bits of info. The computer hardware design was done at Exchange works. The construction and initial testing to successful execution of all instructions was done at 3 facilities, Exchange Works, Beeston and Poole Dorset. I was at Poole.

This was a crash project. We built and tested the 3 computers in 3 months and they were integrated into a working redundant group on a token ring ready for demo in exchange control in another 3 months.I was pulled of my prior job I think in 1966 and told I was on a new project to build a computer. We were given computer register specs and told to design it using limited range of TTL chips in the a.m. In the p.m. we were given 2 pieces of transparent film with circuit card outline and fixed 1416 pin chip pad positions on it and a roll of black tape. We implemented the morning's design in circuit wiring layout with the tape joining the pads. We gave those in and next day we had actual circuit cards made by using the taped film as masters for the PC etch resist exposure.

Subsequent days we assembled cards, built test equipment, and built the computer. One computer took a 5 ft cabinet. That included a core memory also made by Plessey. All instructions were microcoded. The microcode design was customisable using wire-wrap on cards with extendable ANDOR gates for conditional inputs. Each register bit and each BUS bit was displayed on a light on the side of the cabinet to facilitate debugging. A set of 20 switches allowed data entry to registers and also were switches for address input and a single instruction and single clock step function. We worked 8:30 a.m.to midnight 3.5 days a week with 2.5 days off in teams of 2. There was 0.5 day team overlap and the teams at the 3 locations shared debug information daily and implemented fixes the others found.

A similar process was implemented for the integration phase done with all 3 computers trucked to Taplow Court, Maidenhead, then a Plessey Research Centre. We were EXTREMELY relieved when the 3 computers still worked perfectly after their truck rides. We successfully had it making phone calls within the second 3 months and also for the Australian demo made it play Waltzing Matilda on speakers. Sound was implemented by using the NO-OP instruction decode and feeding it to audio. Using this we could hear the actual routines and get a sense of proper or improper operation as well as play tunes.

Subsequently, before I went to the USA in 1970 I worked on the PP250 designing the shared memory to CPU bus. Later I joined the same team at ITT in Shelton Connecticut to help design and implement ITT (then Alcatel's) 1240 telephone exchange (another fascinating project) in a dedicated research centre built just for that project.