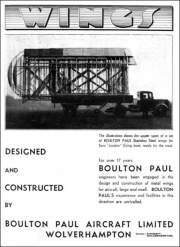 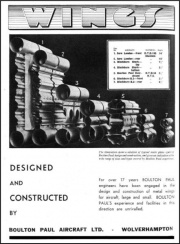 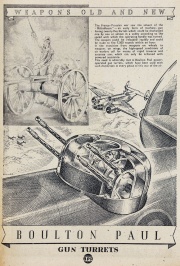 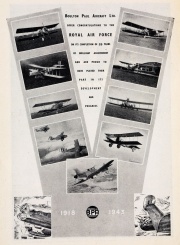 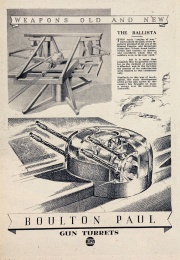 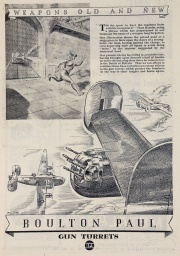 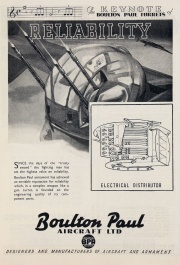 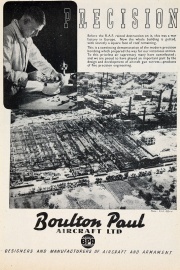 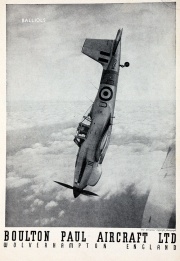 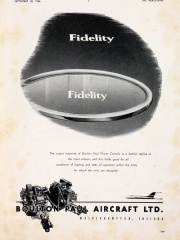 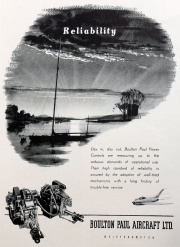 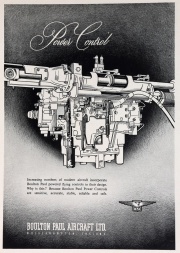 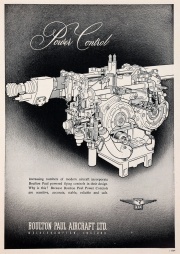 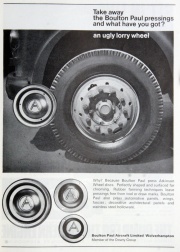 1934 The aircraft building business was sold off by Boulton and Paul of Norwich, which continued to operate as a construction business[1]. The new company was listed as a public company.

Their Overstrand bomber was just entering service - it featured the world's first enclosed, power-operated turret, mounting a single Lewis gun and propelled by compressed air. The company licensed a French design of an electro-hydraulic four-gun turret which became a major feature of their future production. In addition to fitting turrets to bombers, Boulton Paul was to install them in fighters. Boulton Paul's chief aircraft designer was John Dudley North.

Over the next couple of years a new factory site was built up in Pendeford, Wolverhampton. This gave access to a large skilled workforce on top of the 600 or so employees that left Norwich for Wolverhampton. Even so Boulton Paul would later set up a training centre in Scotland to bring in extra workers. The first "turret" fighter to be built was the Hawker Demon.

This was followed by Boulton Paul's most famous aircraft, the Defiant, which was a revolutionary but flawed concept - a "fast" fighter with no fixed forward armament but a powerful four-gun dorsal turret.

The company produced 136 of the Blackburn Roc aircraft 1937-1940 under sub-contract, the company was responsible for the detail design of the revised Skua fuselage from the engine firewall back to the tail joint on the rear fuselage, including the BPA Type A Mk IIR gun turret and installation. Blackburn designed the rest of the airframe details including the revised wings.

Boulton Paul also built the Fairey Barracuda and did conversions of the Vickers Wellington. The only post-war design was the Balliol advanced trainer, of which 229 were built, including 30 as the "Sea Balliol" deck-landing trainer.

Post-WWII: In the jet age, Boulton Paul worked on the English Electric Co Canberra and De Havilland Vampire. It designed and built a couple of delta-wing jet-engined aircraft for research work and continued to tender designs for official requirements.

1970 The company name was changed to Dowty Boulton Paul Ltd. The company was by then a member of the Dowty Aerospace and Defence Group of companies.

1991 Dowty Boulton Paul, along with others was grouped again as Dowty Aerospace with the acquisition of the group by TI.

2000 TI sold the company to Smiths and becoming part of Smiths Actuation Systems Division in 2001.

In September 2009 GE sold the actuation business of the former Dowty Aerospace at Pendeford Lane, nr. Wolverhampton to Moog but refused to sell them the factory and land it occupied. It is still unoccupied, while GE have carried out a number of environmental clean-ups. Moog operated from the site while it built a new factory on the I.54 development site off J2 of the M54 – moving there in 2012.

Boulton Paul was one of the two main innovators of gun turret designs for British aircraft, along with Nash & Thomson; they supplied large numbers of installations for British aircraft. Boulton Paul's designs were largely based on originals licensed from the French company SAMM (Societe d'Application des Machines Motrices), while Nash & Thomson concentrated on the FN designs originated by the firm's co-founder, Archibald Frazer-Nash. Boulton Paul's turrets were electro-hydraulic in operation; electric motors located in the turret drove hydraulic pumps that powered hydraulic motors and rams. This was more effective than electric motors alone, and did not require power developed by the aircraft's engines as did the hydraulic system utilized by the Nash & Thomson design. Production was transferred to Joseph Lucas Ltd.[4]