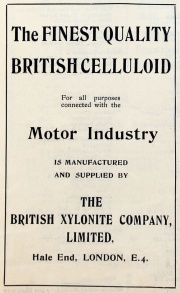 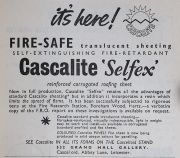 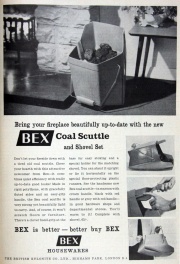 Although the trade name Xylonite (derived from the Greek word xylon meaning 'wood') is best known for its association with the cellulose nitrate products made by the British Xylonite Co, it was originally coined by Daniel Spill as the trade name for his improved version of Alexander Parkes' Parkesine material. Among the earliest products made from the material were knife handles, imitation coral jewellery, tubes and insulating materials for electric cables.

1877 June 13th. The British Xylonite Co was incorporated when it took over the business of Messrs Daniel Spill, H. J. Leigh Bennett and A. D. Mackay at 124 High Street, Homerton, in London's east end. In the same year, the Homerton Manufacturing Co was established next door in 122 High Street, Homerton. The object of the latter firm was to manufacture various articles from the cellulose nitrate sheet made by the British Xylonite Co.

1879 The two companies were merged with Levi Parsons Merriam and Ernest Leigh Bennett as joint Managing Directors. On the latter's retirement in 1884, Merriam became sole Managing Director, a post he held until his death in 1889.

In its early days, the company had many problems, some of them associated with poor quality material and changing fashions, and for many years no return was made to shareholders. It was a Mr B. F. Stevens who came to the rescue with financial assistance until times changed for the better.

1885 One fashion that was to serve the company well was that of washable collars and cuffs made from Xylonite. A collar factory was started in Holloway, London. At the same time the Homerton factory was found to be too small for the growing business (to say nothing of the highly flammable nature of the material being produced in a residential area) and search began for a site in the country.

1887 The 130-acre Brooklands Farm at Brantham, near Manningtree on the Essex/Suffolk border, was purchased. As there was no accommodation for employees, the Company built Brantham New Village containing about sixty houses. The fancy goods operation remained at Homerton.

1895 The Homerton plant producing finished articles from Xylonite was proving too small.

1896 the Company bought the 50-acre Jack's Farm in Hale End, London and work was started on the new factory, where the fancy goods operation was relocated - also see Halex.

By 1898 the new factory was in production.

1900 A new collar factory at Hale End was completed by 1900 to replace the Holloway site.

1929 Listed Exhibitor. Manufacturers of Combs, Brushes, Mirrors, and other Toilet Articles in Xylonite. Also Xylonite in sheets, rods, and tubes, and Lactoid (casein) in sheets and rods. (Stand Nos. J.99 and J.125) [4]

1955 Halex factory had been modernised to allow use of new equipment to make larger BEX household goods; had started selling Bissell carpet sweeper, made under licence from Bissell Carpet Sweeper Co of USA, which would use a few plastic parts; Cascelloid division had seen a down-turn in business; Scintillex had increased business; the recently purchased Vogue division had justified its purchase. Other subsidiaries included Expanded Rubber Co, Bexford, and Plastic Cutters[6]