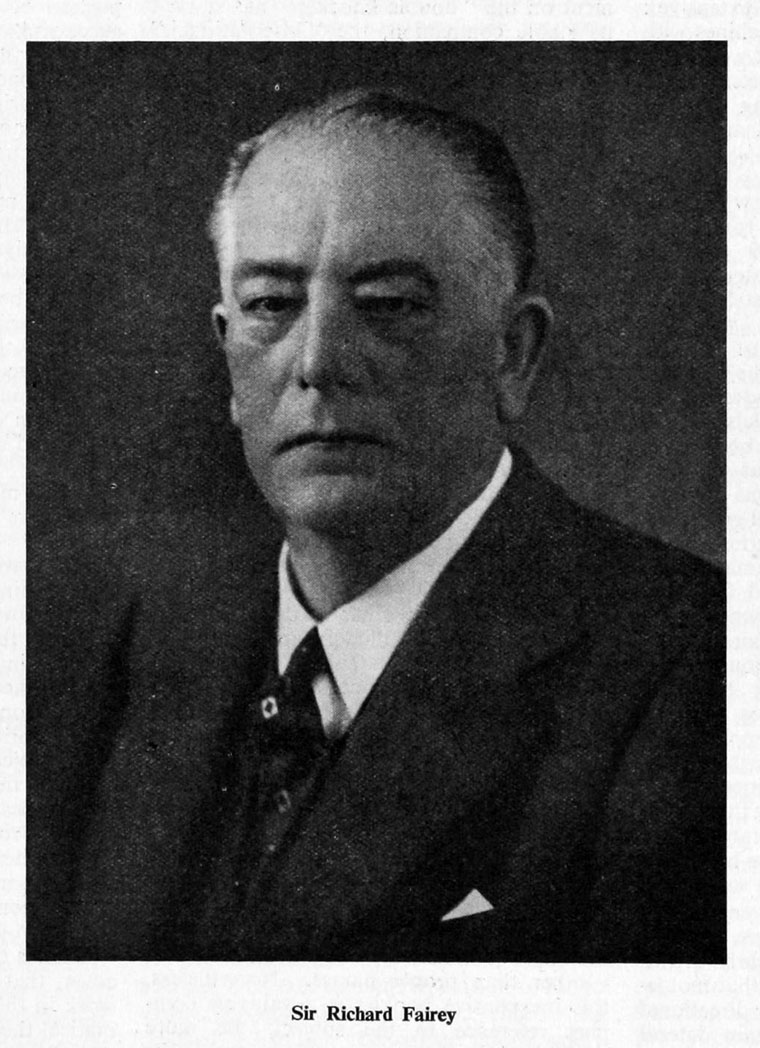 1887 May 5th. Born in Hendon, Middlesex, the son of Richard Fairey and his wife Francis Rebecca Jackson

Apprenticed at the Finsbury Technical College where he studied City and Guilds courses in electrical engineering and chemistry.

1902 The family's financial problems led to Fairey taking a job, aged 15, with the Jandus Arc Lamp and Electric Co who manufactured arc lamps. His progress was such that he was able to take charge of the installation of electric lights at Heysham Docks whilst still in his teens.

His next job was as an analytical chemist, working on boiler-feed and fuel problems at Municipal Borough of Finchley power station.

Fairey became a skilled designer and builder of model aeroplanes and active member of the Kite and Model Aeroplane Association.

1910 June 4th. Fairey entered a model flying competition at Crystal Palace, London. His model monoplane design won 1st prize in the Longest Flight and Stability Competition with a distance of 153yds 1 ft 10in. His success in aeroplane modelling helped establish his reputation as a craftsman and innovator.

1911 Fairey aged 24 became General manager with the Blair Atholl Aeroplane Syndicate, then working on tailless aircraft to the designs of John William Dunne at Eastchurch, Isle of Sheppey.

1915 Formed his own company, Fairey Aviation Co. At the outbreak of the 1914-18 war he attempted to join first the R.N.A.S. and then the R.F.C., but was refused by both on medical grounds and by reason of his skill as an aeronautical engineer. A year later, at the age of 28, he formed his own aircraft company. It started with an office in Piccadilly, and factory space was found initially in the Gramophone Co facilities at Hayes.

His company developed a new factory at Hayes just across the Great Western Railway.

1929 Listed as chairman and a director of Fairey Aviation Co. Of Grove Cottage, Iver, Bucks.[3]

In 1930 a 150-acre flying field was developed on land purchased from the church under the control of the vicar of Harmondsworth, Middlesex. Known as the Great West Aerodrome, it was later compulsorily purchased by the Crown during World War II, and today forms the south-eastern part of Heathrow Airport, London.

Soon afterwards a seaplane base was established at Hamble. He also gave his private yacht to the Royal Navy for the duration of the war. Armed and refitted, she served on anti-submarine duties at the Royal Naval Dockyard, Bermuda as HMS Evadne.

1934 Married Esther Sarah, daughter of Francis Stephen Whitmey, bank manager. They had a son John Stephen Fairey and a daughter

1956 September 30th. Died. Fairey remained in charge of his company until his death in the early morning at the London Clinic from cancer. Fairey, who was 69, had been suffering for several years from a heart condition. During those forty years he was involved with the development of many of the companies most important products including; aircraft, rotorcraft, marine craft, mechanical engineering and rocketry.

ON Sunday last, Sir Richard Fairey died in a nursing home several hours after an operation.

Charles Richard Fairey was born at Hendon in 1887, attended the Merchant Taylor's School, and trained as an electrical engineer at Finsbury Technical College.

In the early years of this century he took an active interest in model aircraft, with which he was highly successful in competitions.

In 1911 he became chief engineer of the Blair Atholl Syndicate, formed by J. W. Dunne to build his stable aeroplanes, and two years later took a similar post with Short Brothers, who were also building aeroplanes at Eastchurch, Isle of Sheppey.

When the Fairey Aviation Company, Ltd., was founded in 1915, the first aircraft it built were Short seaplanes for the Admiralty. At that time the Royal Flying Corps was equipped principally with aircraft originating from the Royal Aircraft Factory, and so the company concentrated on machines for the Royal Naval Air Service.

The first Fairey design was a large twin-engine biplane, the "F.2," remarkable for its folding wings. This did not go beyond the prototype stage, but it was followed by a contrasting design of great interest. To meet a naval requirement for a seaplane needing only small stowage space, Fairey adapted the Sopwith "Baby," and, to obtain an acceptable landing speed, made provision for the camber of the wing to be varied, the rear part of the wing being hinged at the rear spar. This and other devices to ease the design compromise between high and low-speed cases were long a characteristic of Fairey aircraft.

At the end of the war were initiated the versatile "III" series and two large flying-boats, "Atalanta" and "Titania."

The intense advance in performance that had taken place during the war did not continue in the subsequent years. When Fairey secured the British rights to the Curtiss "D.12" liquid-cooled V-1 2 engine and the Reed metal airscrew one engine he brought back from the U.S.A. in his own cabin aboard ship he was able to build a two-seater day bomber, the "Fox," which exceeded the performance of contemporary bombers by about 50 m.p.h.

At Northolt aerodrome one took the air with an Armstrong Whitworth " Siskin " fighter and proved able to carry the battle to the single-seater. Subsequently, one squadron of the Royal Air Force was equipped with these very clean single-bay biplanes. Later the type was sold overseas, and was built by the Fairey subsidiary in Belgium.

Aerodynamic refinement was also the essence of another successful design, the Long Range Monoplane. A thick cantilever wing housed 1000 gallons of fuel, and a slender fuselage, the Napier "Lion" broad-arrow twelve and a crew of two; in a flight of nearly fifty-seven and a half hours, the Mk. 11 aircraft established a world record for distance flown in a straight line of 5309 miles.

It was an ambition of Richard Fairey's to build a complete aircraft airframe, engine and propeller and Captain A. G. Forsyth designed for his firm a supercharged V-12, the "Prince." No support was forthcoming for this engine, which compared with the Rolls-Royce engines that had followed the imported "D.l2's," and so a highly original project was undertaken. This was an H-24, in which each side of the engine was completely independent and drove its own half of a contra-rotating propeller; the advantage of this arrangement was that, using it, a naval aircraft with folding wings could incorporate twin engines. This engine, with two-speed superchargers, developed 2200 h.p. and weighed 2200 lb; a variant, which was not actually flown, had a second supercharger for each bank, making four in all, which could be clutched in at high altitude and gave the remarkable performance of 1700 h.p. at 40,000ft.

At the commencement of the 1939-45 war, the "P.24", engines and designs were taken to the U.S.A where the Ford Motor Company initiated production for use in the Republic "P.47", fighter; when the U .S. also entered the war, this advanced project was finally abandoned and the" Thunderbolt" appeared with a turbo-charged air-cooled radial.

Meanwhile, the Fairey aircraft had developed rapidly, numerous projects having included the fabulously beautiful "Fantome", biplane and the less prepossessing "Hendon" night and "Battle" day bombers. When the war began, pressurised four-engined airliners were being built for British Airways. Fairey equipment was still prominent in the Fleet Air Arm, the "Seal" having been followed by the "Swordfish," and during the late war this arm again became the speciality of the company with their "Fulmar" fighter, "Barracuda" torpedo-bomber, and "Firefly" fighter reconnaissance two-seater.

After the war, the twin-engine naval aircraft was brought to actuality in the "Gannet" with an Armstrong Siddeley "Double Mamba" driving independent contra-props.

The company now diversified its activities greatly: a helicopter, the "Gyrodyne," was built which established a world speed record at 124 m.p.h. Subsequently, a study of the Doblehoff helicopter project in Austria led to the adoption of reaction propulsion for the rotor, compressed air being delivered along the blades to burners at the tips: unlike Doblehoff, Fairey mixed in the fuel only at the combustion chamber. The airscrews, being no longer required to react torque, were now free to drive the machine forward, and another step towards the conventional aerodyne was to incorporate a fixed wing. These principles are now being built into the "Rotodyne" transport, which exploits the ability of the tip-jet motor to liberate really high powers, in this case around 7000 h.p.

An entirely different vertical-takeoff project was the Fairey "Delta I," which it was intended to control under powered lift by pivoted jets at the rear of the fuselage. Vertical ascents were made by models, but the piloted aircraft flew only on aerodynamic lift.

Another research aircraft, the "Delta II," became world-famous this year when it established a speed record of 1,132 m.p.h.: with 60 deg. of sweep on the leading edge, it exceeds Mach number 1.8 with a single after-burning turbine. Supersonic aerodynamics is also exploited by the guided weapons division of the company, which has produced the "Fireflash " missile. At the same time, the company has carried out interesting work on power controls, production methods, and full-scale lofting.

During the second war Fairey himself was not working with his company, but was in the U.S.A. where he became head of the British Purchasing Commission: in 1942 he was knighted.

He had many interests besides aviation. He sailed his yacht "F1ic " in 12m races and, when the big "J" class was active, raced the "Shamrock V." Subsequently, he took part in the design of another 12m, the "Evaine." For many years he had a Stanley steam car. He was an ardent fisherman, and held a stretch of the River Test.

Sir Richard was an Honorary Fellow of the Royal Aeronautical Society and of the Institute of the Aeronautical Sciences ; he had been president of the R.Ae.S. and chairman of the Society of British Aircraft Constructors.

He was a member of the Order of the British Empire, a Commandeur de l'Ordre de la Couronne, and held the United States Medal of Freedom with Silver Palm. He is survived by his second wife, two sons, one of whom, Richard, is on the board of his company, and a daughter.