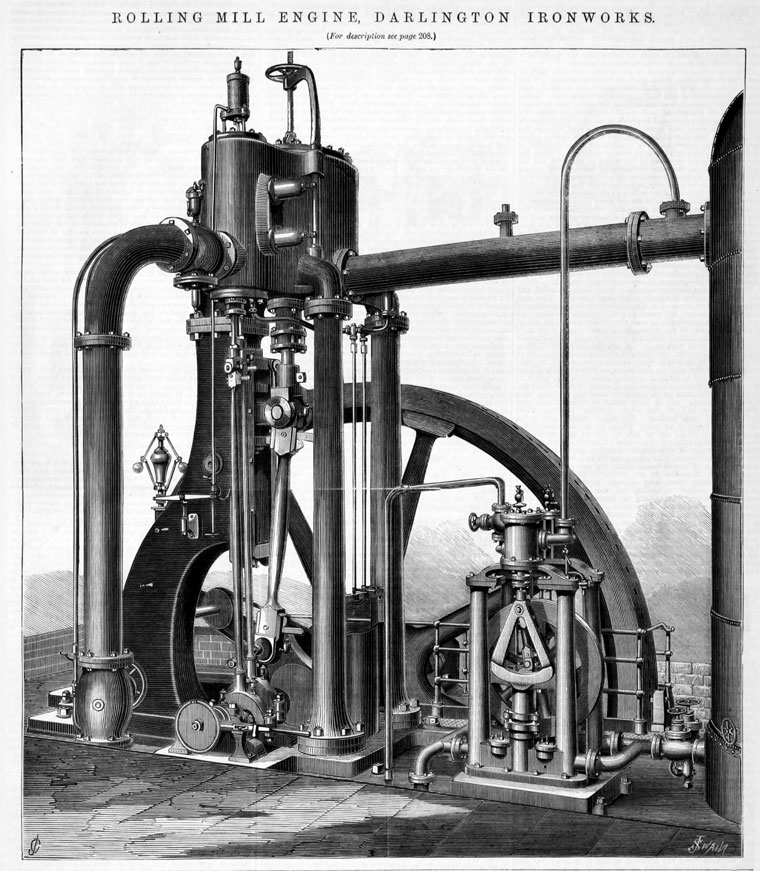 The first production in Darlington of malleable iron, that is, wrought iron made by puddling, was by William Barningham (1825-1882) at the Darlington Iron Works on Albert Hill.

From a modest beginning in engineering in Middlesbrough, where he met John Harris, Barningham later established himself successfully in business in Pendleton, near Manchester, (see William Barningham) after seeing an opportunity to re-roll worn rails on a site where transport costs could be minimised. As the Pendleton works were not suitable for larger foreign contracts for new rails, he sought a base in Cleveland

1858 Barningham identified Albert Hill as his preferred site. Besides its situation on the main railway line between London and the north, and close to the north-east ports, an added advantage was the pig-iron available free of freight charges from the South Durham Iron Co's blast furnaces. Henry Pease, then chairman of the South Durham company, also saw the profitable potential in having the two works side by side, offering Barningham four and a half acres of land at £350 an acre, with an option on a further eight acres at £300 an acre. Pease ensured that house-building was prohibited on the property sold to Barningham, so that the surrounding acres controlled by Pease and his associates maintained a high value for housing thousands of workers and their families whose arrival was anticipated.

1859 Barningham's ambitions ran ahead of his initial purchase, even before the works were completed, and he bought the Springfield farm, an adjoining estate of 85 acres to the north, in 1859 for £11,000. By the time Jeans wrote about these transactions in 1875, some of this land was changing hands for £1,000 an acre.

Machinery for Darlington was made at Pendleton, and the roof of the Albert Hill puddling and rolling plant was also imported from Manchester. Barningham had bought and rebuilt the roof of the Manchester Art Treasures Exhibition of 1852. There were two arches, each of a fifty foot span, running 800 feet long north to south. This, along with the high headroom and white-painted interior, provided 'palatial surroundings' and Jeans noted that 'travellers… between York and Newcastle must have noticed with surprise these ponderous and yet elegant-looking works…' The main line ran down the east side of the factory, the Stockton and Darlington Railway on the south side and South Durham Iron Co was on the west. 'The night passenger on the Stockton and Darlington sees many a glimpse of the foliated tracery of the arches, showing sharp and clear in front of the glowing fires. Far off, on road and river, the tall chimneys are conspicuous landmarks'. Despite the grandeur, Barningham had little capital available at first.

The Springfield Ironworks, later called the Old Works, was east of the main line and north of the Skerne, with rail access via the 'Five Arch Bridge' over the river. Sixteen acres of the Springfield farm was later sold to Robert Stephenson and Hawthorns, but the remainder stayed with the Albert Hill works when the site was afterwards transferred to the Darlington Forge Co. The Springfield plant made bar iron which was re-rolled into rails at the main works.

1864 Barningham's became the Darlington Iron Company, when 800 tons of wrought iron was produced each week; Benson estimates that this would have required 73 furnaces and 300 puddlers, or 1,000 employees in all.

1872 There were 1,600 workers between the two sites by 1872, rising to almost 2,000 in 1875. William Barningham's management of the works appears to have been confrontational and antagonised his workforce, many of whom were Irish. It was claimed that a 'Fenian plot' to shoot him had once been hatched in the Dolphin Hotel, although the attempt was never made.

There had been a strike in 1861, and Barningham prosecuted workers for absenting themselves from work in 1870. The company's success had come rather from Barningham's 'special genius and faculty for the laying out of works of this description' while his nephew Thomas ran the commercial department.

1872, the fortnightly wages bill approached £5,000, and the firm was producing 80,000 tons of finished iron each year. William Barningham had made enough money in his short time in Darlington to become 'an extensive iron-stone proprietor near Guisborough and owner of steam shipping employed in the iron trade'.

1872 The Pendleton works had recently started to make Bessemer steel and the Darlington Iron Company Ltd was established; Barningham was paid £275,000 for his share of the old firm. [It was said that he was 'desirous of retiring from their principal management']. The new company, seeking to raise £350,000 in £20 shares, had as its directors many of the largest ironmasters in the Tees valley - Thomas Vaughan, Joseph Dodds M.P., John George Swan, and John Gjers. Thomas Barningham was to continue as manager, and the company's prospects seemed bright. The valuation of £275,000 was said to be much less than the cost of a new plant, and John Jones of the Middlesbrough Royal Exchange write privately that the new enterprise 'cannot fail to be a good investment'. The works, with 198 puddling furnaces, was the largest of its kind in the north of England or south Wales. By the end of 1873, in thirteen months of operation, it had made a profit of £80,000, paid a 31.5% return on shares and carried a considerable sum to reserve. Immediately afterwards a trade depression hit and the company never again paid a dividend.

By 1874 Hugh Bell, son of the Middlesbrough ironmaster Lowthian Bell, had taken over from Vaughan as chairman, with Thomas Barningham as managing director.

1875 When Jeans described the company's operations there were 105 puddling and 40 mill furnaces at the main works, and 92 furnaces at Springfield. The company's own locomotives carried puddled bars to Albert Hill for manufacture into iron rails, which was practically the only product. 'Of this commodity they probably manufacture more than any other firm in England'. Barningham supplied rails to almost every railway in India, to many American lines including the Pacific Railroad, and to Russia.

1878 Barningham was involved in a considerable scheme to develop workers' housing off the North Road, suggesting a confidence that high levels of employment would be maintained. Yet at the same time he was trying to overturn a rating valuation on the firm's premises by arguing that machinery listed in 1872 was standing idle.

By the end of 1879, the company's losses amounted to £20,000, although its position was considered relatively good as £5 a share was available to call upon and the works, 'comparatively idle for three or four years' - all employees had been laid off during an iron trade depression in October 1878 - had 'regained a state of activity under the American spurt'. Shares rose from about £1 to £10-£11 in three or four months. Work started on building a Bessemer plant and the production of Bessemer steel rails began in 1880, replacing the trade in iron rails, which had collapsed. The steel works, which had cost £25,000, were successful and busy, but the company had lost money on stocks of haematite iron and was obliged to make a call on shares and advertise debentures. The money was not forthcoming, and £35,000 was due to Barningham for the purchase of the works. The failure of the company in March 1881 was greeted by surprise, and blamed on the bulk of shareholders who had declined to subscribe to the debentures. It was anticipated that the firm would be re-constructed.

1882 A scheme to reconstitute it was announced the following autumn, and the firm was re-launched in 1882, the year of William Barningham's death, as the Darlington Steel and Iron Company Ltd. Bessemer converters, which the board had ordered in 1878, were delivered only in 1884, making the Springfield plant redundant.

1885 The Springfield works lay derelict and to let in 1885 while efforts continued to re-equip the Albert Hill site by installing new engines. The Pendleton Iron Works, which made a wider variety of railway and colliery products, itself failed in 1888.

1894 After the Darlington company mortgaged its Albert Hill works to Thomas Barningham and others in 1894, the plant was sold to Sir Hugh Bell and transferred to Middlesbrough the following year. The Darlington Forge Co took over the site, though not the business, which was liquidated.

1919 Thomas Summerson and Sons expanded into Barningham's foundry, presumably the Springfield site, in 1919.