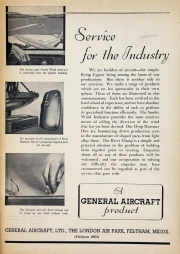 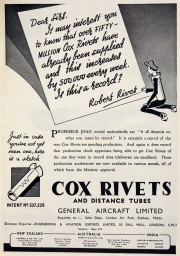 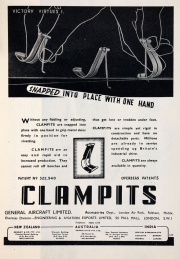 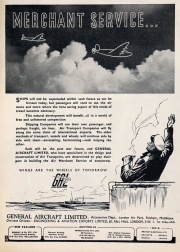 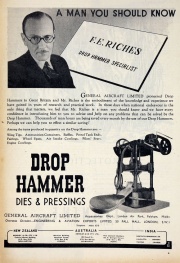 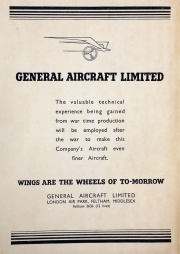 1931 General Aircraft Limited was formed at Croydon Aerodrome on 27 February, to take over the assets of another aircraft company, the Monospar Co.

1934 In October, the company restructured (the original company was voluntarily wound up) and moved to Hanworth Aerodrome in Feltham.

1935 Gained the licence for the British Empire for Hispano Suiza aero engines. These would be manufactured in the old Douglas factory at Bristol which had just been acquired by the British Pacific Trust[2]

1936 The company received an order to build 89 Hawker Fury II. This was followed by other sub-contract work including the conversion of 125 Hawker Hinds into trainers.

1938 The company bought the design of the Cygnet aircraft from C. W. Aircraft which was developed as the Cygent II. The company also acted as a repair facility during the war for the Supermarine Spitfire and it modified Hawker Hurricanes into Sea Hurricanes. General Aircraft became an important designer and manufacturer of gliders during the war. After the war the company had to diversify into the construction of pre-fabricated houses and car bodies.

1944 Philco Radio and Television Corporation acquired shares in Aero Engines Ltd that had previously been owned by General Aircraft, with consequent changes in board membership[6].

1946 General Aircraft brought together two of its subsidiaries Airtraining (Fair Oaks) Ltd and Airtraining (Oxford) Ltd in a new company Universal Flying Services. The company was diversifying into a range of other products; gained sole manufacturing rights to the a new type of pump from Megator Pumps and Compressors Ltd[7]

The company had designed and started to build a large transport aircraft the GAL.60 Universal. It realised it did not have the room or capacity to produce the aircraft in any number and approached the Blackburn Aeroplane and Motor Co Aircraft who were looking for work to keep its factory at Brough Aerodrome busy.

1949 This led to the two companies merging on the 1 January 1949 to form the Blackburn and General Aircraft Ltd. The first aircraft was transported from Farnham to Brough and the factory at Farnham was closed.