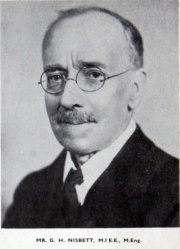 Apprentice at Paterson and Cooper

The engineering world has suffered many losses this year and, in the death of George Hinde Nisbett, at the age of 73, on October 21, 1940, at his home at Huyton, another gap has been made in the ranks of the great pioneering engineers of the electrical industry.

It is too early to assess to the full the share that Mr. Nisbett took in laying the foundations of the industry. After his training under Professor Ayrton and Professor Perry, with Paterson and Cooper, Ltd., and a brief period as distribution engineer of the City of London Electric Lighting Company, his real career began when he joined the British Insulated Wire Company as chief engineer in May 1894. With his great enthusiasm and grasp on new ideas, he took hold of the then new paper-insulated cable and applied it to the distribution of electricity with such results that, by 1896, the company had built the first lead-sheathed paper-insulated cables in the world, and had in service the well-known concentric cable of that type for the London Electric Supply Corporation.

From this time the company's cable business developed steadily under Mr. Nisbett's guidance, and his work for the company was recognized by his promotion to the Works Management Committee in October 1918, and to the Board in March 1924.

Later he became managing director, from which position he retired on May 31, 1940, owing to ill health, although he retained the Vice-Chairmanship of the Board.

He extended the influence of the B.I. by joining the Boards of other companies and, at the same time, he was enabled to resume his early interests in electricity supply. He became Chairman of the Electrical Finance and Securities Company and of the Midland Electric Corporation, retaining this latter position until his death.

His fertile mind was constantly engaged in schemes for the better organization of industry, and he took a leading part in the formation of the Cable Makers and other Associations, while he was originator of the scheme that led to the collaboration of leading cable makers under the name of Cable Research. He had known his inevitable end for a considerable time, but, with unflinching courage, he had worked almost to the last, and had made well- thought-out plans so that the business of the companies in which he was interested might not suffer. The memory of his unselfishness and forethought is an abiding inspiration to those who now have the responsibility of carrying on.

Mr. Nisbett was an Original Member of the Institute of Metals, and served as a Member of Council from 1911 to 1913.