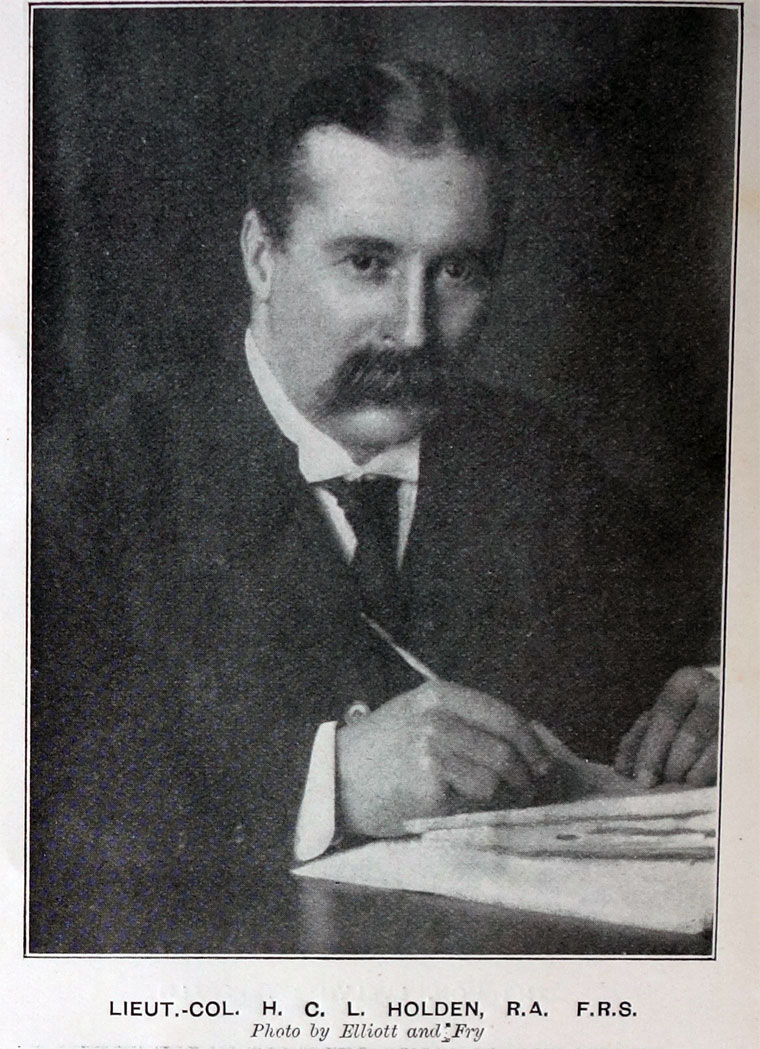 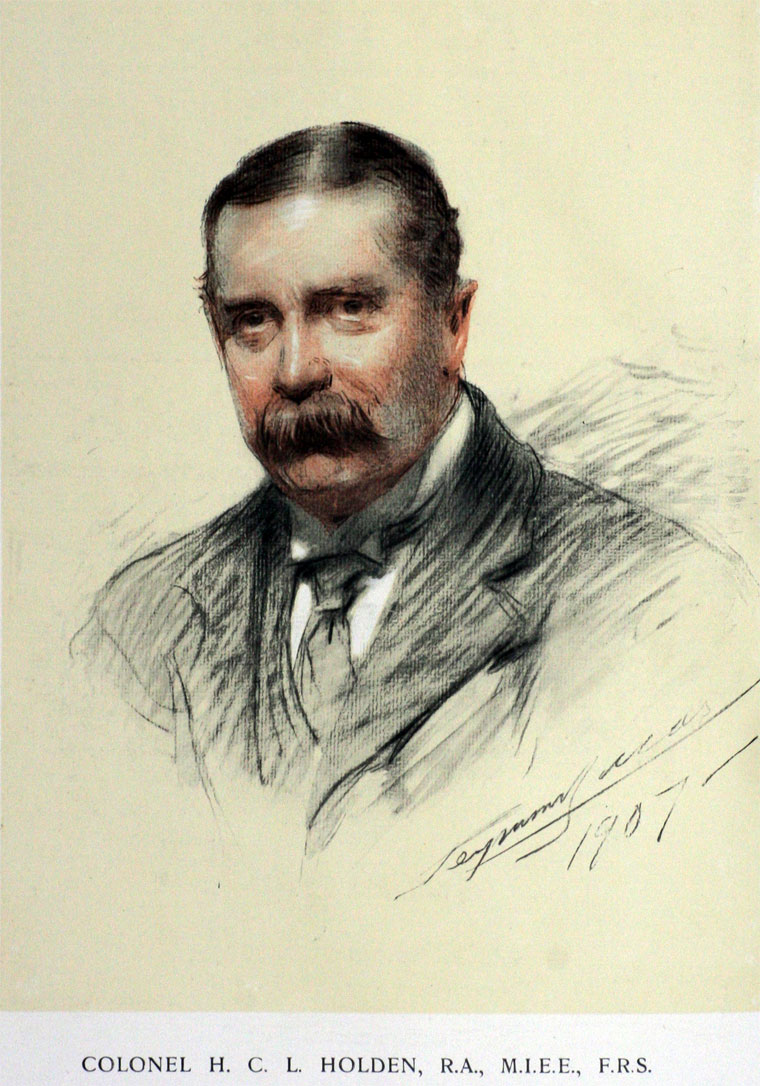 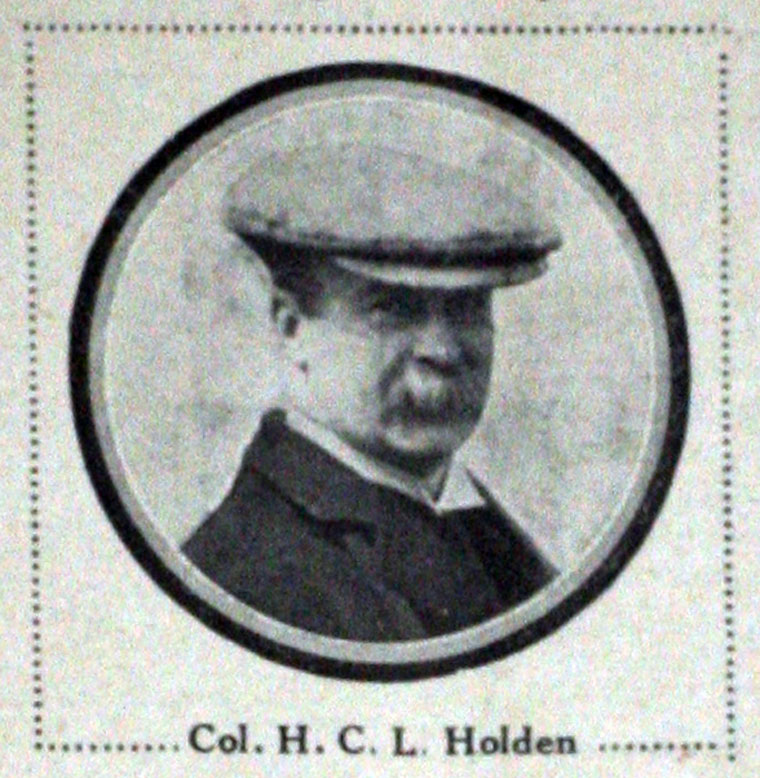 1895 Invented and built a motor-propelled bicycle with a four-cylinder engine. An article in The Engineer of 23rd April 1904 has details. [1]

In 1906 he designed the Brooklands race track

1921 Chairman of the Royal Aero Club

HOLDEN, LIEUT.-COLONEL H. C. L., R.A., F.R.S.- Born at Cheltenham in 1856 and educated at Ipswich, Lieut.-Colonel Holden obtained his commission in the Royal Artillery in 1875. He has held many scientific appointments, and in 1895 was made a Fellow of the Royal Society. He is now Superintendent of the Royal Gun Factory, Royal Arsenal, Woolwich. Connected with automobilism from the very earliest time, he designed in 1895 the four-cylinder engine which bears his name, and was the first to realise and put into practice the four-cylinder Otto cycle engine, the advantages of which are now generally acknowledged.

Lieut.-Col. Holden has been very intimately associated with this Club, and has figured as a judge or member on all Committees of Trials organised by the Club and Technical Committees. His interest in automobilism is mainly centred in the technical side of the movement; he is a member of the War-office Committee on Mechanical Transport, and of the Council of the Institution of Electrical Engineers.

With this issue of The Autocar we present to our readers, in the form of a supplement, a reproduction of a crayon portrait by Mr. Seymour Lucas, R.A., of that most popular automobilist, Colonel H. C. L. Holden, R.A., F.R.S. Colonel Holden's connection with, and arduous labours in, the cause of automobilism are generally known, but a few biographical details may fittingly accompany the portrait.

Colonel Holden received his education at Ipswich Grammar School and the Royal Military Academy, and obtained his first commission in the Royal Artillery (not Royal Engineers) in August, 1875. He proceeded to India with his field battery two years later, and served in the East until 1880, after which he returned home.

Colonel Holden was subsequently engaged with the late Colonel Watkin in perfecting the electrical position finder for coast defence, which work drew upon him the attention of the authorities, so that in 1885 he was appointed proof officer to the Royal Gun Factory. This appointment was held until the formation of the Inspection Department in 1888, when he was made Inspector of Guns. During his tenure of this office he remodelled all the various appliances and instruments concerned with the proof of guns, and experimental work in ballistics, such as chronographs. The pattern of this instrument as designed and perfected by the subject of our picture for ascertaining the velocity of projectiles is now in use all over the world, having become the standard instrument for such work.

Many devices in connection with crusher gauges for determining the pressures in guns, electrical firing apparatus, and other details are due to Colonel Holden's thought, resource, and ingenuity.

In 1899 Colonel Holden was appointed Superintendent of the Royal Gun Factory, and since he has held that supremely important position the factory has been almost entirely remodelled, and is now equipped with the most modern and up-to-date installation of plant for the construction of modern guns that exists anywhere in the world. This is particularly the case with regard to the electrical propulsion of the machine tools, etc., the employment of electrical pyrometers by which temperatures during every operation of forging, oil hardening, tempering, and annealing are ascertained, and in many cases automatically registered, in such-wise that every portion of steel employed in the construction of a gun has its history recorded.

That Governments do occasionally recognise individual services to the nation and great personal abilities when placed at the disposal of the country is proved by the fact that in 1902 Colonel Holden was the recipient of a considerable grant of public money in recognition of his "researches in connection with ordnance and explosives."

From 1899 Colonel Holden has held the position of Superintendent of the Royal Gun Factory, but on the 1st August last he was additionally appointed Superintendent of the Royal Carriage Factory, both of which appointments he now holds. Guns of all descriptions, both for the navy and army, are made in the Gun Factory, while the Carriage Factory produces field carriages and the ten thousand and one other things that are necessary to the equipment of horse, field, and garrison artillery.

In 1902 the Lefroy gold medal was presented to Colonel Holden in recognition of his distinguished contributions to the scientific study and application of artillery. Moreover, he was the first officer to obtain this medal under the new conditions.

With regard to Colonel Holden's connection with automobilism, he is a founder member of the Royal Automobile Club (RAC), having been present at that famous meeting in Whitehall Court when the Club was practically founded, and Mr. Hiram Maxim electrified the assemblage with entirely irrelevant, but particularly interesting, historiettes. From that moment Colonel Holden threw, himself heart and soul into the movement, and lent his strenuous and powerful aid to each and every undertaking of the Club. In all technical matters his influence has been most powerful and valuable, and his presence on committees charged with the deliverance of grave decisions and awards is a guarantee that such are soundly and meritoriously made.

At a somewhat critical period of the club's history he courageously stepped into the breach and became chairman of the A.C.G.B.I. in the years 1904-5. Only those most intimately acquainted with the tangle of club matters during that period are aware how much Colonel Holden's tact, discretion, and urbanity served to aid in placing the Club in the position it occupies to-day.

For several years Colonel Holden represented the A.C.G.B.I. on the International Commission at the Gordon-Bennett and Grand Prix Races. He is to-day chairman of the Competitions Committee.

We should like to recall also the construction by Colonel Holden in 1896 of a horizontal four-cylinder motor bicycle, fitted with high tension distributed ignition, etc., on the lines of the very apparatus fitted to-day to Daimler cars, and sold by the Electric Ignition Co of Birmingham.

His latest work, as is known to all who follow automobilism, was the design of the form and banking of the Brooklands motor track and the arrangement of the varied electrical communications in use there. While Colonel Holden's brilliant abilities and strenuous work have been of great advantage to automobilism, they have, in other and perhaps more important directions, proved of yet greater value to his country.

Brigadier-General Sir Capel Lofft Holden was born in 1856 and educated at The Royal Military Academy, Woolwich, and on completion of his course there, was posted to the Royal Artillery.

During the whole of his career he served in the technical branches of the Army in connexion with artillery, manufacture of ordnance, gun-carriages, etc., and he was eventually appointed Superintendent of the Royal Gun and Carriage Factories at Woolwich Arsenal. In addition, he was President of the Technical Mechanical Committee at the War Office.

Sir Capel Holden was elected a Member of the Institution in 1911, and served on the Council from that date until 1913, when he became a Vice-President.

He was elected President for the Session 1914-15, but owing to the arduous nature of his duties at the War Office during the War he was unable to take up the office.