Model of a Howard & Bullough carding machine at the Musee des Arts et Metiers. Model c.1890 by Digeon of Paris. 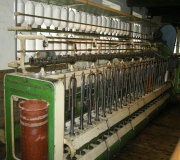 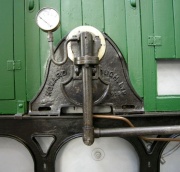 An impressive 1/3 scale model of a Howard & Bullough carding machine (carde à chapeaux chaînés) is on display at the Musee des Arts et Metiers. The model was made c.1890 by Digeon of Paris. See photo.

1891 John Bullough, of Howard and Bullough in Accrington, died. Three of the company's executives decided to set up business on their own. Brothers Edmund and Samuel Tweedale and Joseph Smalley each put £10,000 into the venture which became Tweedales and Smalley.

1894 The Howard and Bullough company was registered on 30 June, to acquire the cotton-spinning and other machine manufacturing business formerly carried on by a firm, but more recently by a private company, of the same name as that now used. [1]

1901 Drawing Frame. Exhibit at Manchester's Museum of Science and Industry.

1931 Private company. Howard and Bullough, Platt Brothers, Brooks and Doxey, Asa Lees and Co, Dobson and Barlow, Joseph Hibbert and John Hetherington and Sons sold their textile machinery making assets to Textile Machinery Makers (TMM) in return for shares. Tweedales and Smalley were initially not partners of the TMM scheme but they joined later.

1931 'ACCRINGTON Corporation is to have an opportunity of giving a practical test to a new method of road construction with the iron tiles upon which Howard and Bullough, Ltd., engineers, are specialising. Many claims are made for cast iron roadways, including durability and stability, non-skid surface, traffic noise and vibration reduction, and low cost of construction. The blocks being produced by Howard and Bullough are in the shape of an equilateral triangle, each side being ll 1/2in. in length, and each block weighing about 10 1/2 lb. They are laid on concrete, and bitumen placed between the joints allows for the expansion and contraction.'[3]

By 1959 was a subsidiary of Stone-Platt Industries[5]