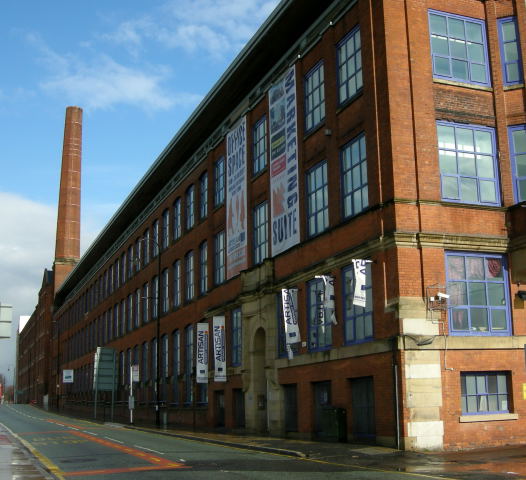 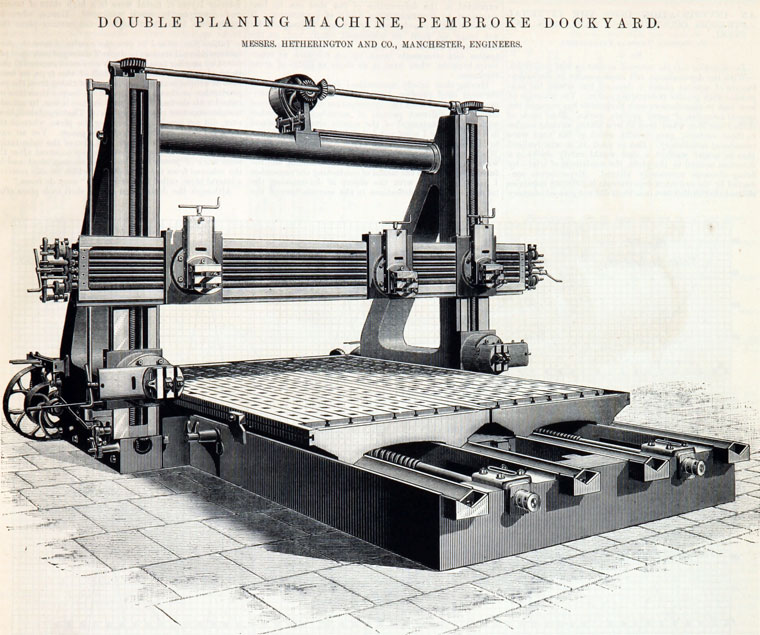 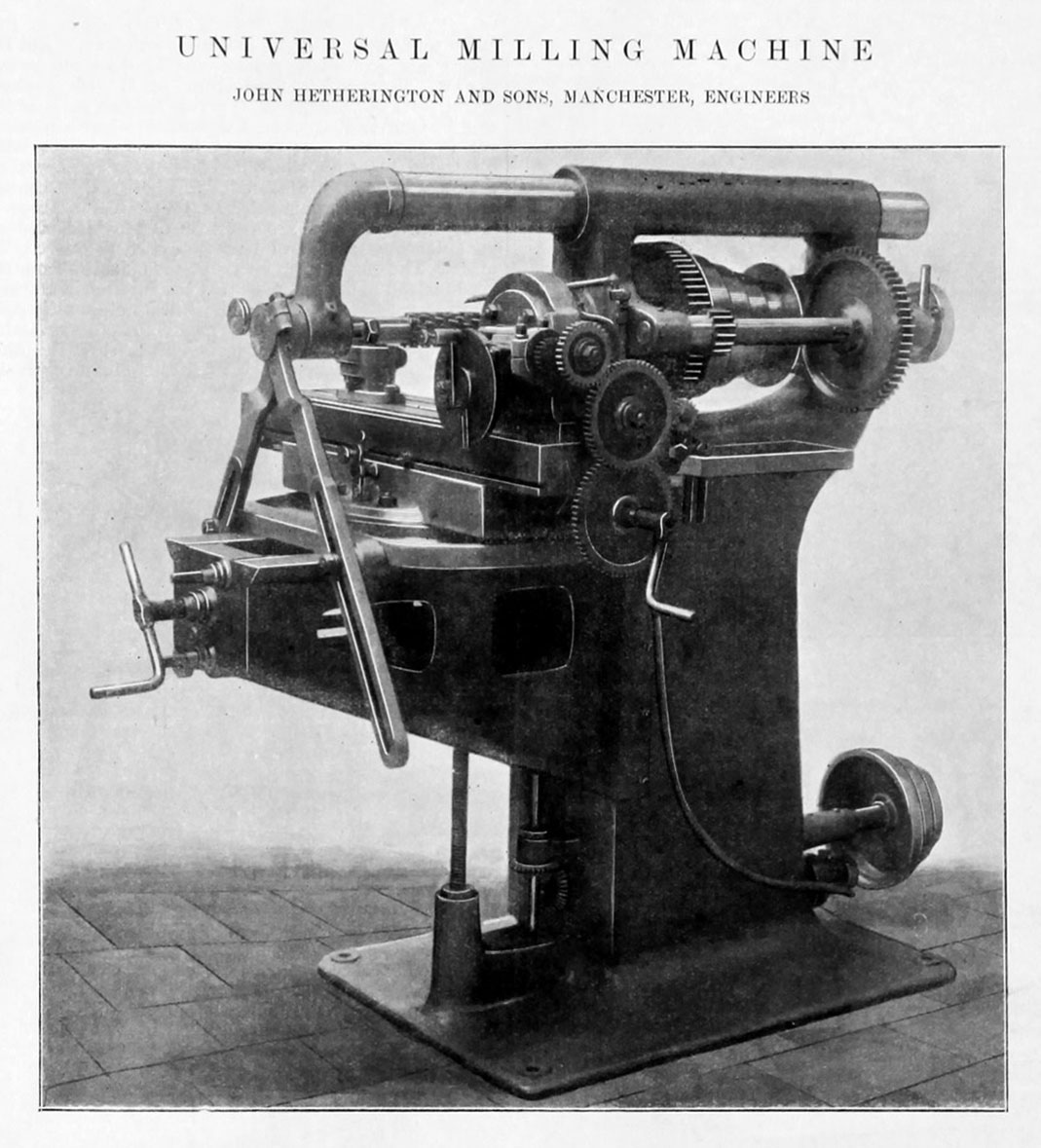 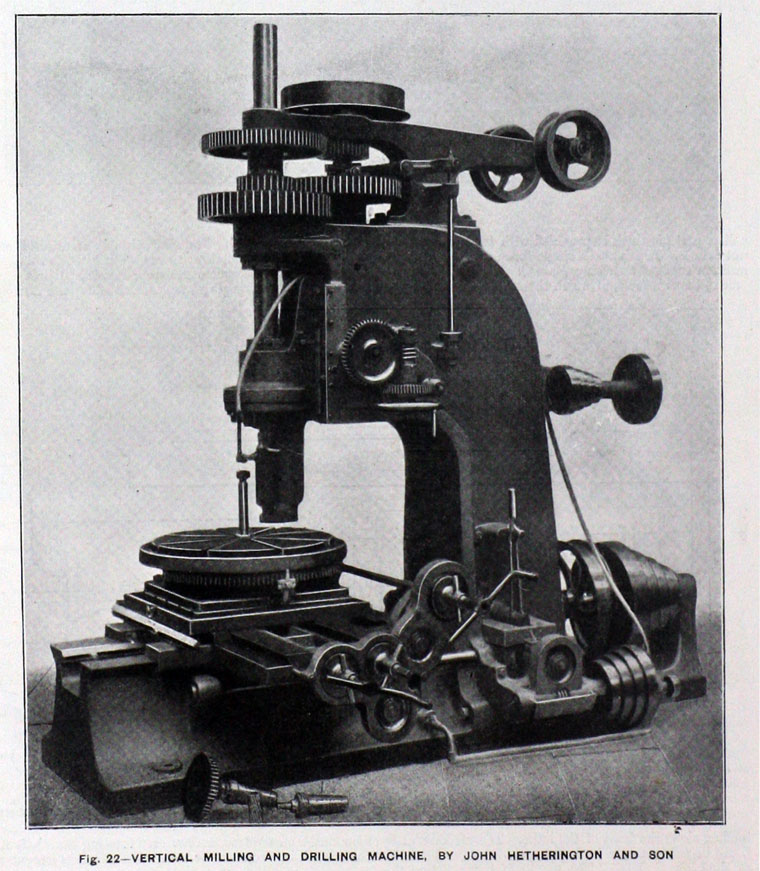 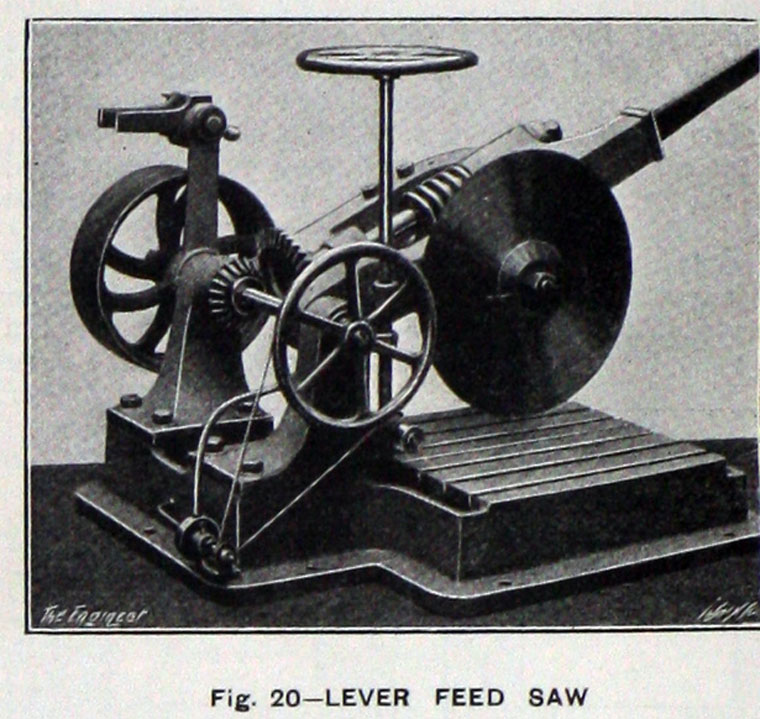 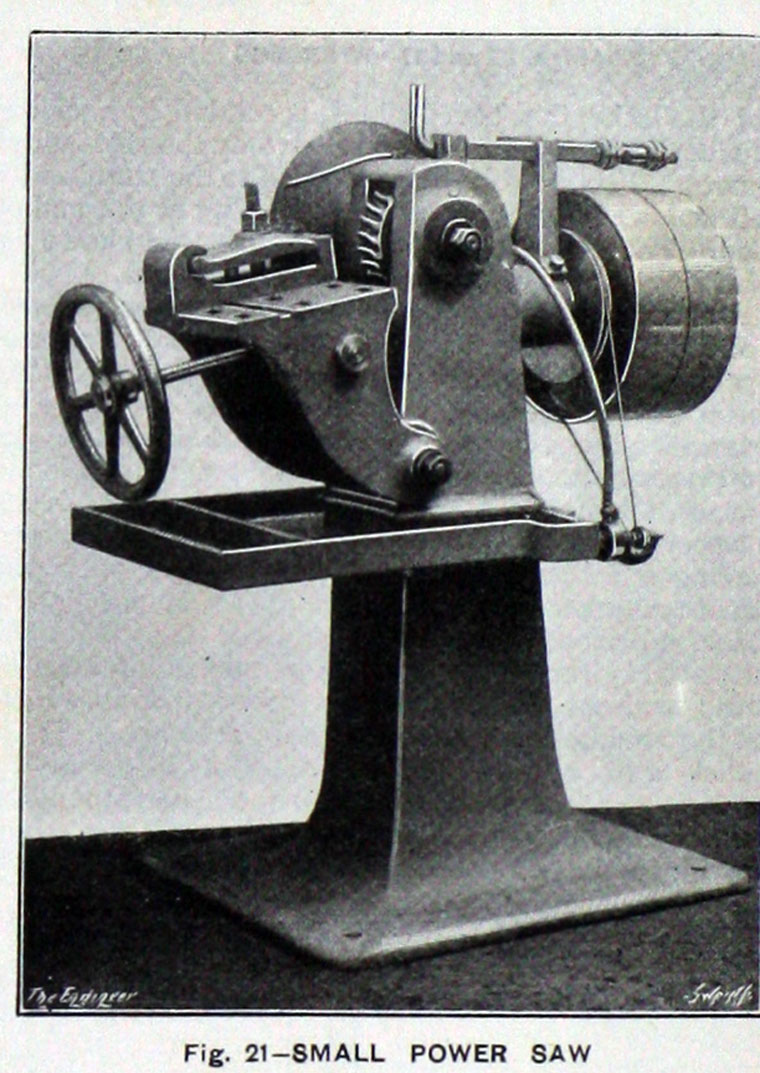 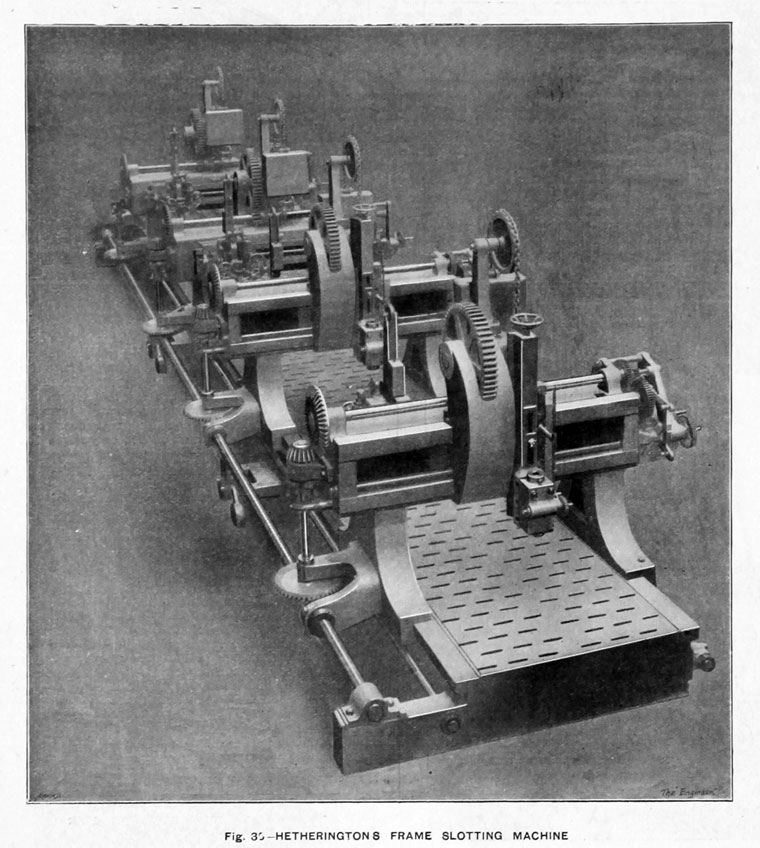 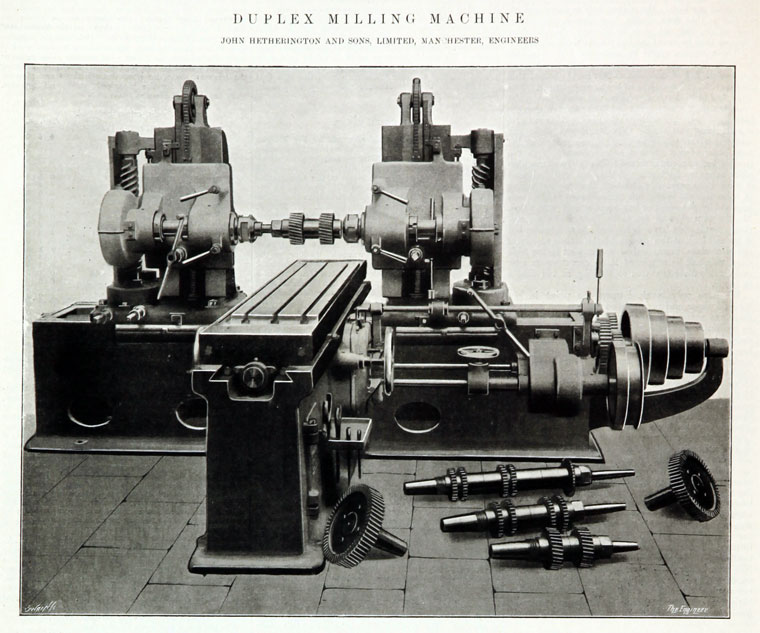 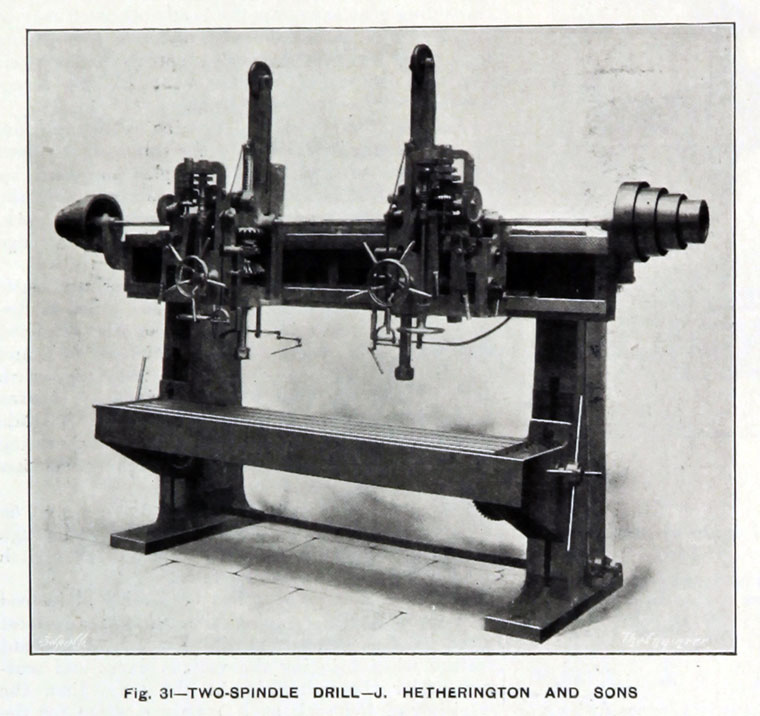 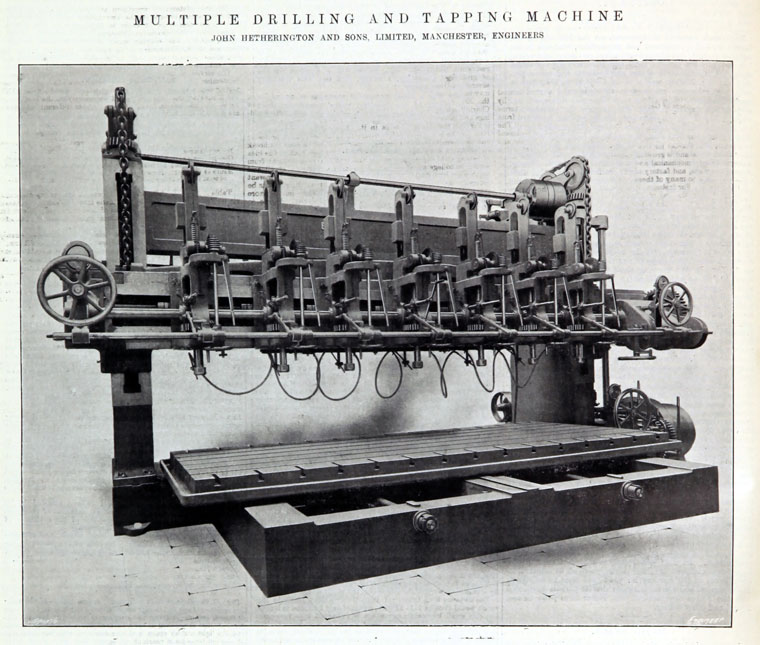 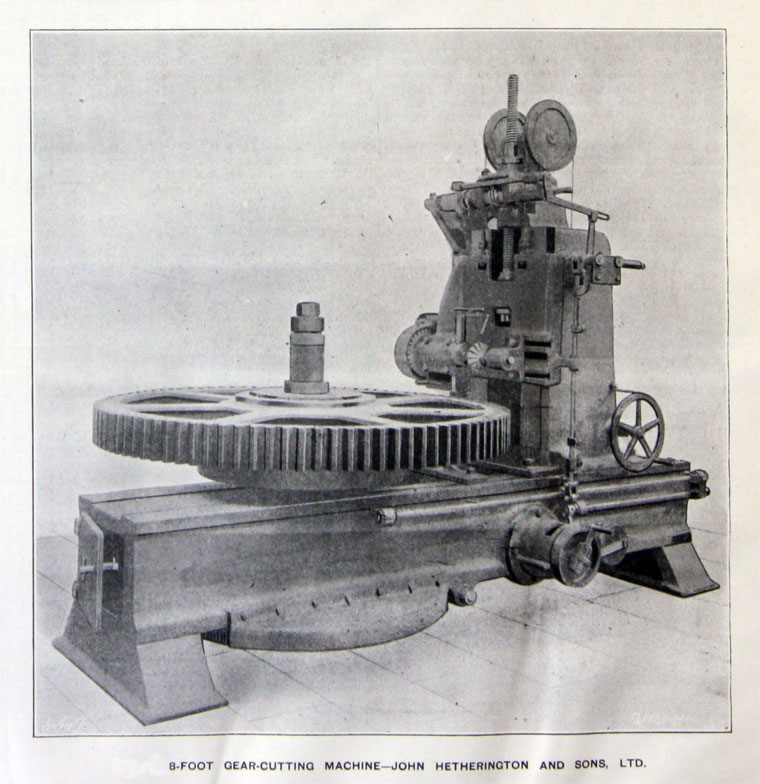 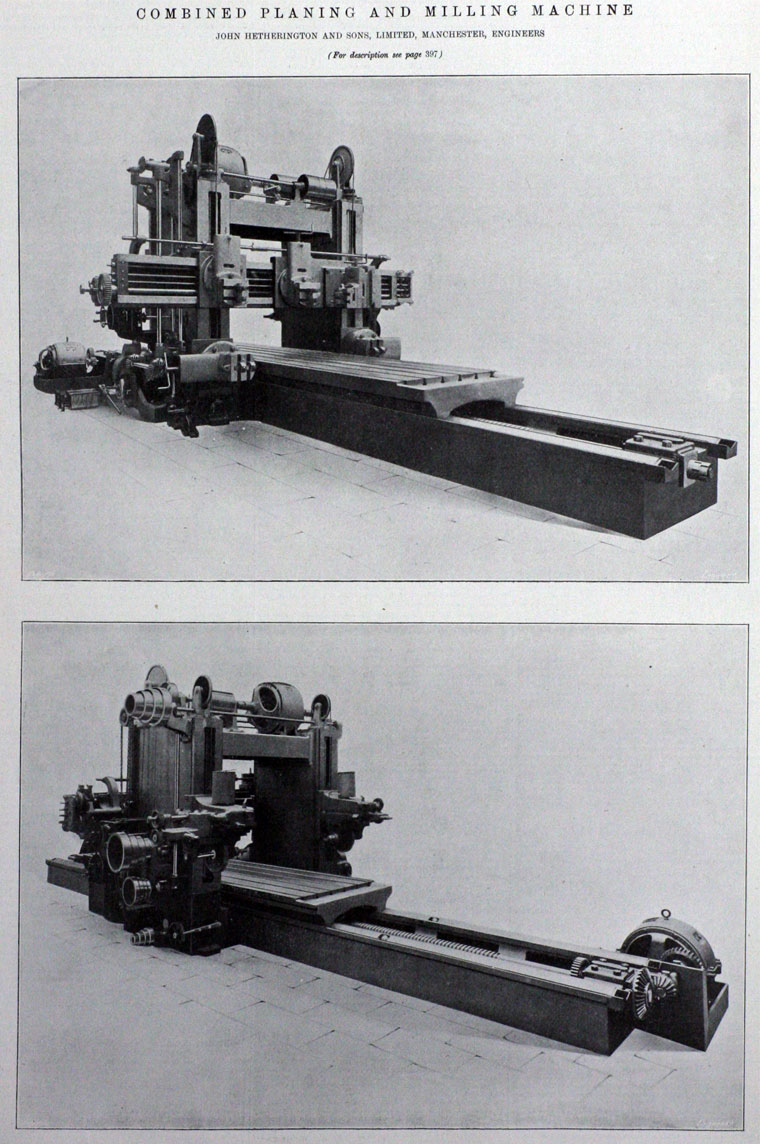 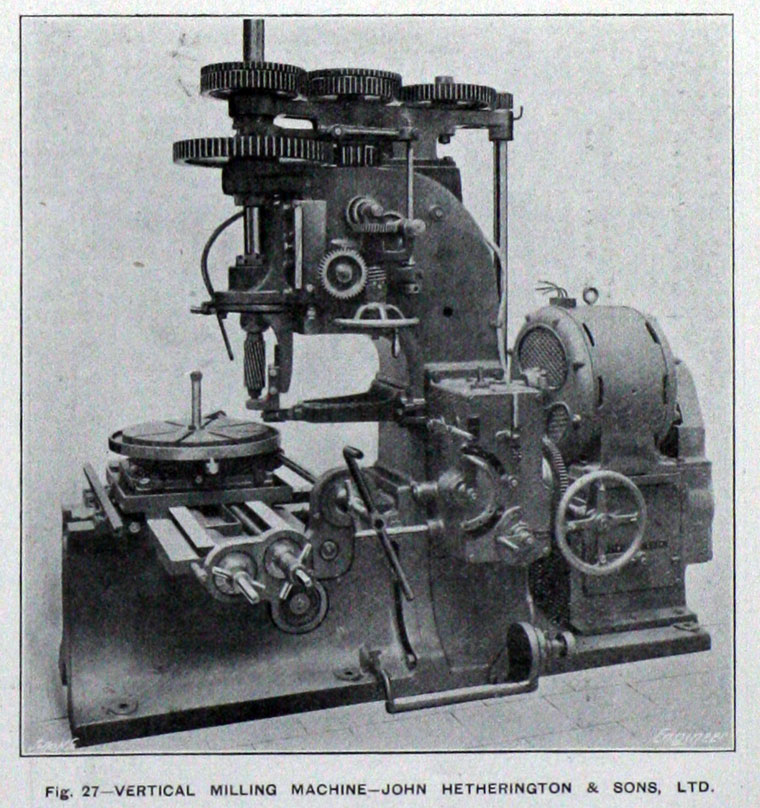 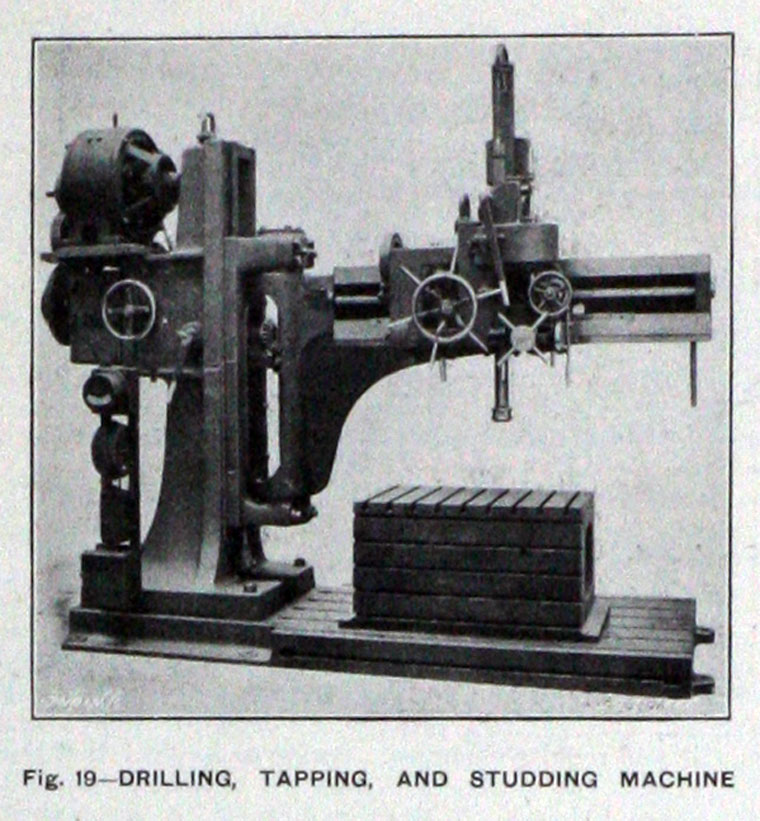 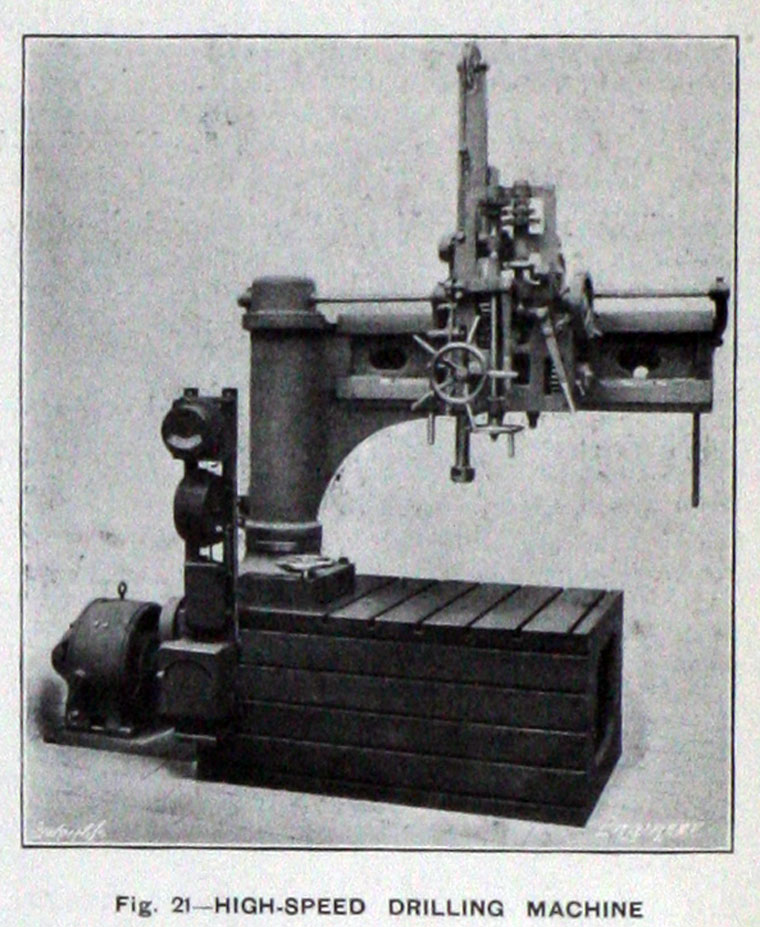 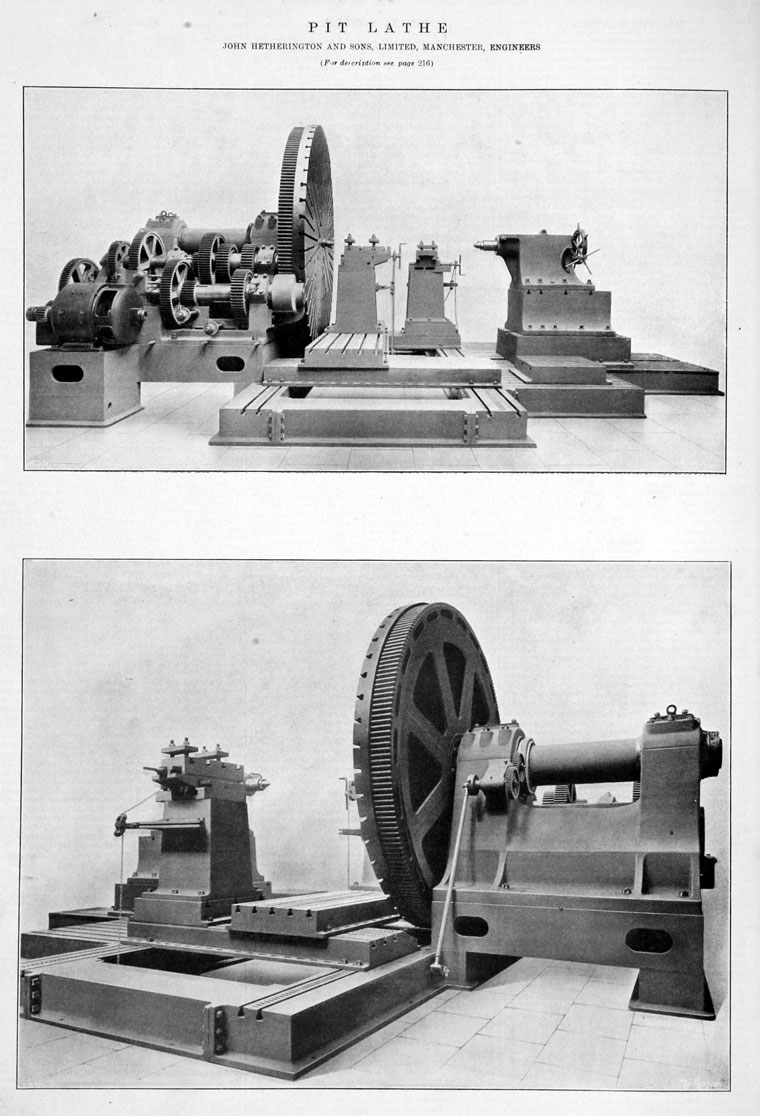 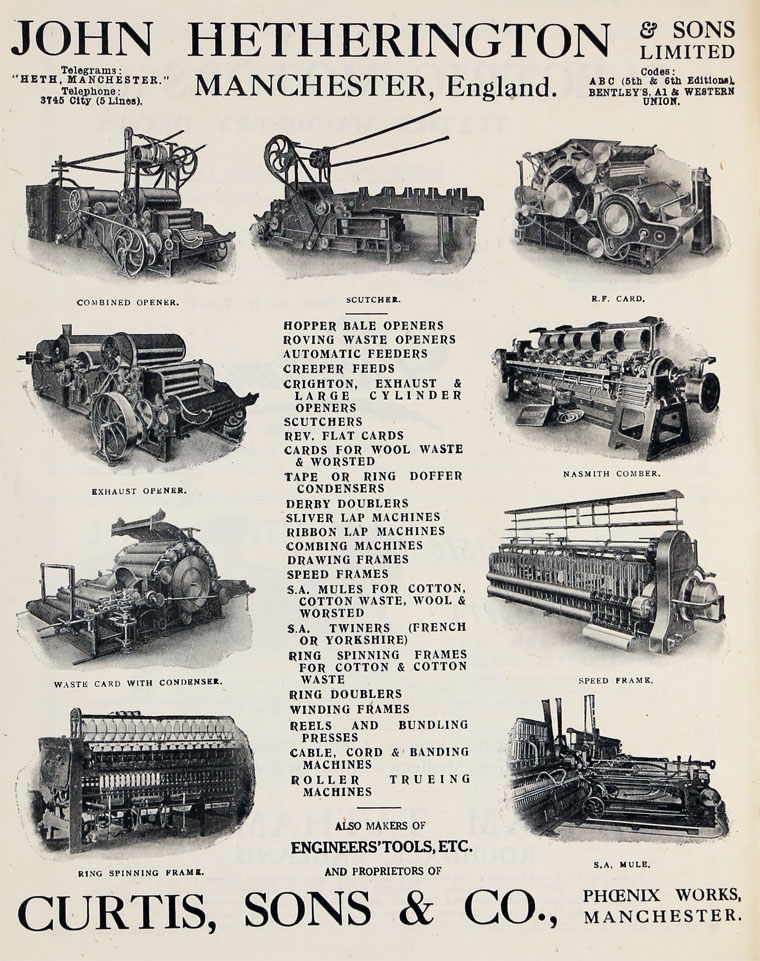 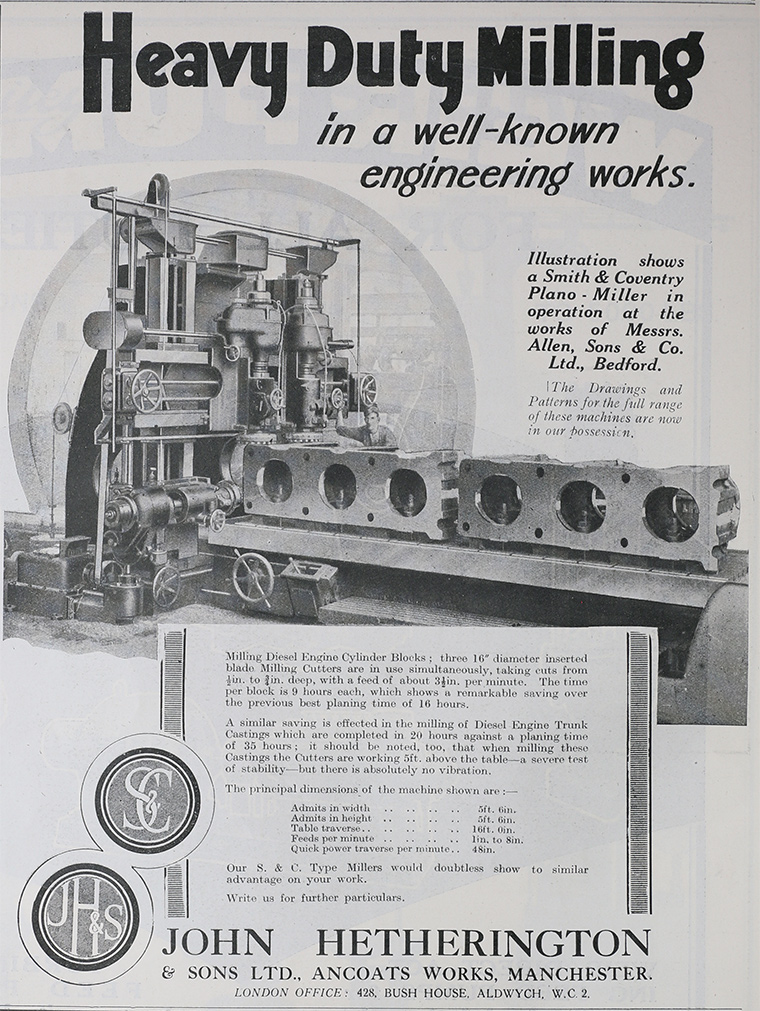 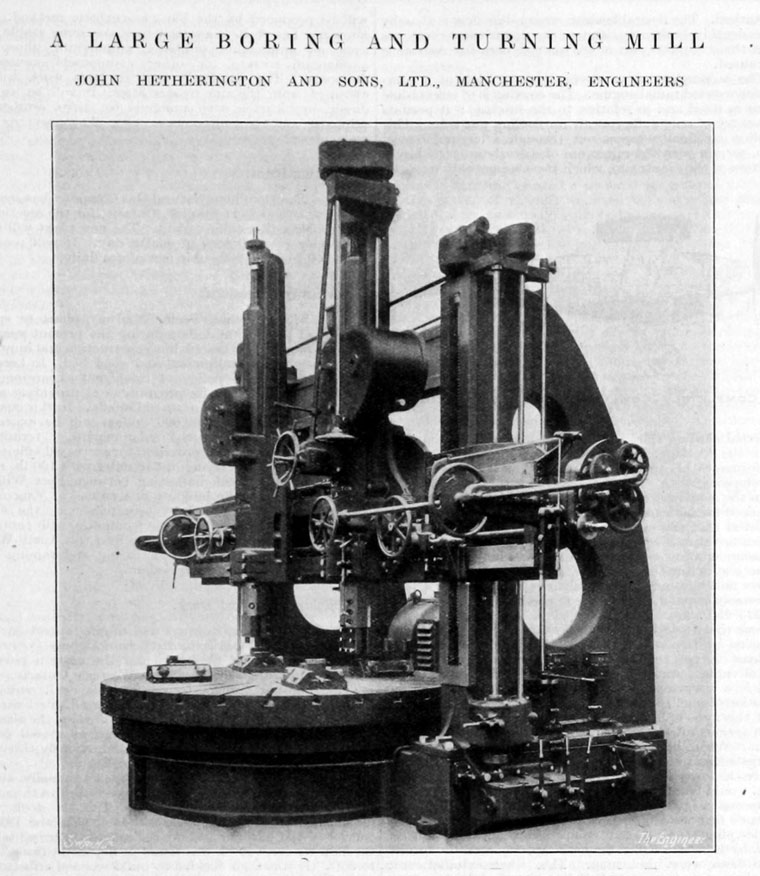 of the Vulcan, Hope, and Ancoats Works, Pollard Street, Manchester.

John Hetherington and Sons were makers of machine tools and textile machines.

1854 John Muir Hetherington becomes a partner in the company

1880 Messrs. Hetherington and Sons' Vulcan Works was producing cotton machinery. A branch of these works making tools had so grown in importance that it was put into a separate concern at a converted cotton spinning and weaving mill in Pollard-street, the street in which the original works were situated - this was called the Ancoats Works and was carried on by a branch of the firm under the style of Hetherington and Co.[7]

1887 The speciality of the firm is overhead travelling cranes.

1888 The 'Draper-Hetherington' Automatic Sprinkler (by Hetherington and Co of Manchester). [8]

1888 Double Planing machine for Pembroke Dockyard (by Hetherington and Co of Manchester). [9]

1890 Incorporated as a limited company.

1894 The company was registered on 29 November, to acquire the business of textile machinists and engineers of a private company of the same name. [11]. The prospectus includes the following information:-

Directors. John M. Hetherington, Esq., Chairman. John M'Queen, Esq., Vice-chairman. Clement V. Haworth, Esq., Manchester. Amos Mellodew, Esq., Oldham. .....The vendor company recently acquired the plant and business of the old and well-known firm of Curtis, Sons, and Co. whose speciality, in addition to cotton machinery, was the manufacture of spinning and other machinery for the woollen trade, and this is included in the present purchase.

The works and premises comprise (1) the Vulcan Works in Pollard-street, Ancoats; (2) The Ancoats Works on the opposite side of the same street, and used for the purposes of the tool making and general engineering department; (3) The Hope Mills, adjoining the Ancoats Works ; and (4) The Phoenix Works taken upon lease at the time of purchasing the plant and business of the late firm of Curtis, Sons, and Co.

1900 The US magazine 'Machinery' described a machining operation carried out on a large rolling mill housing at the works of the Philadelphia Roll and Machine Co 'on an old Hetherington & Co's 60" x 60" x 22' planer'.[13]

1905 Special lathe described in the American Machinist [16]. It could turn flywheels, pulleys, cylinder covers, etc., up to 12 ft diameter, and incorporated a 30" stroke shaping and slotting head.

1929 OLD ESTABLISHED MACHINE TOOL BUSINESS CHANGES HANDS. Messrs. John Hetherington and Sons, Limited have purchased the goodwill, including drawings and patterns so far as relates to machine tools, excepting Vertical and Duplex Key seating Machines of the well-known Machine Tool manufacturing firm, Messrs. Smith and Coventry Limited, which was originally established in Ordsall Lane, Salford in about 1859 and has been carried on lately at Timperley. Messrs. Hetherington intend to run the Smith and Coventry business in conjunction with their existing machine tool manufacture at their Works in Pollard Street, Manchester. Under normal conditions Messrs. Smith and Coventry employed about 300 hands at their works in Salford and as Messrs. Hetheringtons have recently enlarged and modernized their own machine tool works they have every facility and accommodation for dealing with the increased business which will follow as result of their recent acquisition. They are prepared to supply any spare parts - to duplicate in their entirety machines purchased in the past from Messrs. Smith and Coventry [19]

1931 John Hetherington and Sons, Howard and Bullough, Platt Brothers, Brooks and Doxey, Asa Lees and Co, Dobson and Barlow, Joseph Hibbert sold their textile machinery making assets to Textile Machinery Makers (TMM) in return for shares. Tweedales and Smalley were initially not partners of the TMM scheme but they joined later.