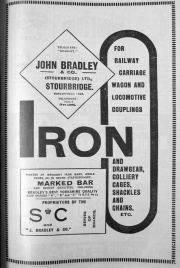 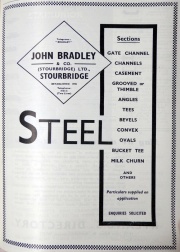 The company set up a forge, steam engine and mills. Initially it converted pig iron into wrought iron plates and rods for local industry. Expansion was rapid and leases were secured on further forges and land.

1802 Steam engine installed in the iron foundry by Fenton, Murray and Wood

1819 Foster went into partnership with John Urpeth Rastrick to expand Bradley's involvement in machinery production. John Urpeth Rastrick became the managing partner in the firm of Bradley, Foster, Rastrick and Co, iron-founders and manufacturers of machinery, at Stourbridge, Worcestershire, taking the principal engineering part in the design and construction of rolling-mills, steam-engines, and other large works[3]

1821 A new foundry was built to cope with the expansion of the business. The company produced bedsteads, cooking plates, wheels and tools, rails and railway sleepers.

1827 James Foster and Henry Bradley became co-partners in the trade of ironmasters, under the name of John Bradley and Co[4].

1831 Foster, Rastrick and Co. was formally dissolved on 20 June. The assets were transferred back into the Stourbridge Iron Works with the foundry business continuing under the management of John Bradley and Co where James Foster was the major partner with Collier and Henry Bradley[6].

Supplied many of the early railways with the first rails, chairs and accessories. Charcoal rods supplied for the first American cable.

1832 Deed of co-partnership [7] dated 3rd May between: James Foster of Stourbridge, Worcestershire, Ironmaster, and Henry Bradley of Wollescott, Oldswinford, Worcestershire, Ironmaster. From 1st January 1827, James Foster and Henry Bradley had been Co-Partners in the Trade of Ironmasters, under the name of John Bradley and Co. They had equal moieties in: Freehold tenements, buildings, lands, steam engines, mills, forges, furnaces, mines, ironworks and premises at Amblecote, Oldswinford; Shutt End, Scotts Green and Brettell Lane, Kingswinford; Dudley, Worcestershire; Eardington and Hampton Loade, Shropshire; all belonging to the several works of the Company. The Works were known as: The Stourbridge Old Works; The Stourbridge New Works; The Stourbridge Foundry; The Shutt End Colliery; The Scotts Green Colliery; The Brierley Ironworks; The Baptist End Colliery; The Eardington Works; and The Hampton Loade Works.

1837 James Foster became the sole owner of John Bradley and Co. The Stourbridge Iron Works continued to produce rods, bars and wires while the foundry worked on specialist rolling machines.

1843 4 puddling furnaces were relit at the Stourbridge Iron Works[9].

1853 After Foster's death his nephew, William Orme Foster (-1899), inherited the £700,000 estate and under his stewardship, John Bradley and Co continued to grow.

1856 With the arrival of cheap steel, Foster failed to invest in new machinery

1870s When the iron industry entered a slump, the productivity of the company declined.

1913 Preferring other pursuits, William sold the company's collieries to Guy Pitt and Co.

1919 Sale of the business by William Henry Foster to Edward J. Taylor of Wollescote Hall near Stourbridge for £15,000[12].

1926 Jan: Acquired the old-established business of Roberts and Cooper. It is understood that the iron and steel trade hitherto carried on at Roberts and Cooper works at Brettell-lane, Bromley, and elsewhere, was concentrated at Brettell-lane works, which were now in active operation after the holidays. A scheme of reorganisation was contemplated at Brettell-lane. John Bradley and Co. were among the oldest makers of the famous Staffordshire iron. They were one of the few firms which, in spite of the ups and downs in the trade, maintained continuous operations ever since their establishment. [16]

1926 December: The works of John Bradley and Co which had been standing idle since the end of April, in consequence of fuel shortage, resumed operations in the second week of December this year. Some subsidiary works of the company ran intermittently during the coal stoppage.[17]

Post-WWII: the Company became part of John Bagnall and Sons.

1966 Company wound up. Latterly its principal asset was a shareholding in John Bagnall & Sons, Ltd. (a fellow Hingley subsidiary) which continued to operate the Bradley rolling mills.

The Lloyd Group then sold the Bradley premises to Sidney Smith and Sons (Stourbridge) Ltd., manufacturers of manhole covers.