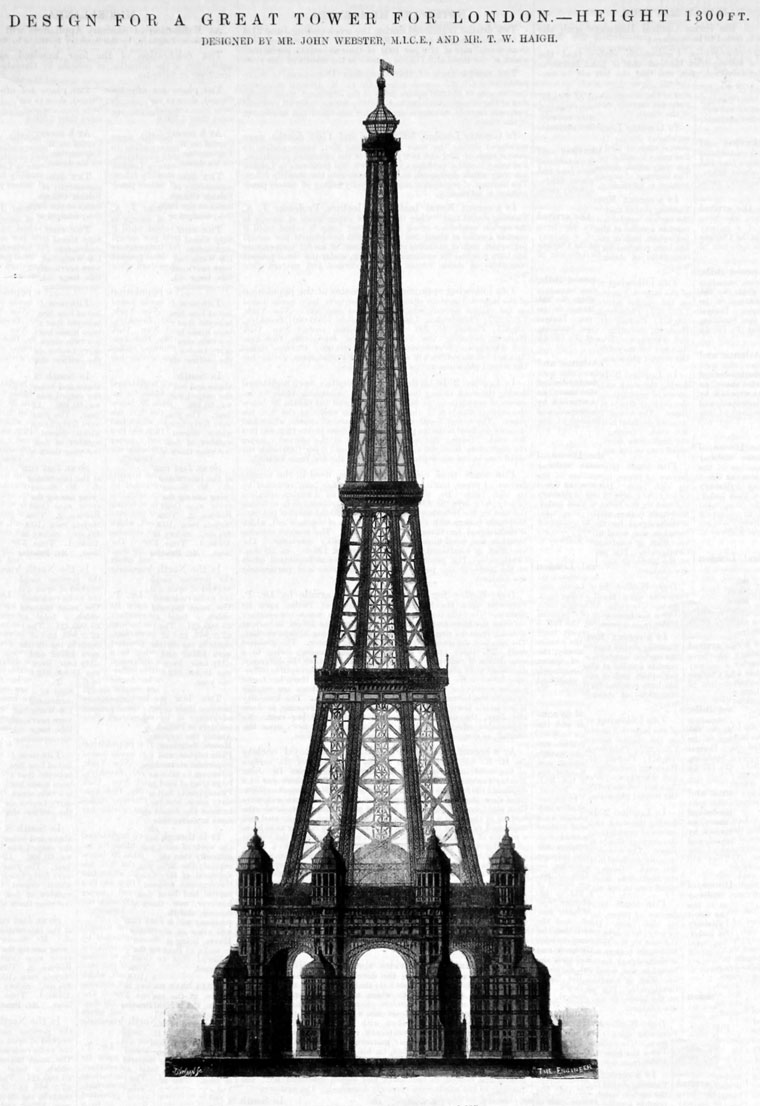 1845 June 9th. Born at Warrington the son of Samuel Mather Webster, a Druggist, and his wife Mary

JOHN JAMES WEBSTER was born at Warrington on 9th June 1845.

He was articled to Messrs. E. J. Bellhouse and Co., Eagle Foundry, Manchester, and stayed with them from 1861 to 1871, occupying for the last four years the position of head draughtsman and assistant manager. During his apprenticeship he was also engineering student at Owens College, Manchester.

In 1871 he became Manager of the Ashbury Carriage and Iron Company, and left the firm in October of the same year to take up a position as chief of the bridge department at the works of Messrs. Thomas Brassey and Co., Birkenhead, which he held for five years.

On leaving this position, in December 1880, he commenced private practice in Liverpool, when he designed a bridge 600 feet long for erection in Australia, and a pier and landing stage for South America and wire ropeways for Spain.

In 1883 he had charge of the erection of two new bridges over the Ouse at Bedford, and of improving the river at the bridge sites.

Mr. Webster was responsible for the design of numerous important bridges and piers, among which may be mentioned: Promenade piers at Dover, Bangor, Minehead, Llandudno, Menai Bridge, Penmaenmawr, Egremont, etc.; bridges at Guildford, Northwich, Boston, Portsmouth, and over the Rivers Cam, Usk, Arun, and Ouse; the reconstruction of the Conway Suspension Bridge, bascule bridges, swing bridges, etc.

In conjunction with Mr. J. T. Wood, he designed the transporter bridge across the Mersey, between Widnes and Runcorn. He was especially successful in open competition, being placed first or second on fourteen occasions. His successes included the Watkin Tower, the design of which had taxed the efforts of eighty-seven competitors, the Sydney Harbour Bridge, the big wheel at Earl's Court, the Stadium, and the structural work of four of the largest buildings at the Franco-British Exhibition.

In 1911 was commenced the construction of a large transporter bridge for South America from his newly finished design. A reinforced concrete bridge at Warrington was his last work. His opinion was highly valued by the Board of Trade, where his services were in frequent request, and for Parliamentary work.

His death took place at Streatham Hill, London, on 30th October 1914, at the age of sixty-nine.

Born at Warrington on the 9th June, 1845, he obtained his practical training with Messrs. E. T. Bellhouse and Company, of Manchester, afterwards acting as their Chief Draughtsman and Assistant Manager. During this period he was engaged on the construction of several large bridges, and also prepared many original designs.

In 1871 he was engaged for the Ashbury Carriage and Iron Company on the design of Indian bridges and other work, and later in that year he accepted the post of Chief of the Bridge Department to Messrs. Thos. Brassey and Company, where he was responsible for many important structures destined for all parts of the world, notably the construction of the Liverpool landing-stage, from the designs of Mr. G. F. Lyster.

In 1881 he engaged in consulting practice in Liverpool, removing later to Westminster. In this capacity he was responsible for a great variety of important work, including bridges at Bedford, Cambridge, Guildford, Northwich, and in India and Australia; the reconstruction of Conway suspension bridge, Portsmouth bascule bridge, Littlehampton swing bridge, and other structures ; piers for Dover, Bangor, Minehead, Llandudno, Penmaenmnwr, Menai Bridge, Egremont, and other places in this country and in South America, ropeways in Spain, machinery for the Alexandra Dock, Hull, and elsewhere, designs for the Lyndhurst Gas and Waterworks, and many other works.

Among his later activities may be mentioned the transporter bridge between Widnes and Runcorn, designed in conjunction with Mr. J. T. Wood, the Stadium and other structures at Shepherd’s Rush, the big wheel at Earl’s Court, and the design of a large transporter-bridge for South America. His last work was a reinforced-concrete bridge at Warrington, since completed.

He gained first or second place in many open competitions, including those for the Watkin Tower and Sydney Harbour Bridge. Evidence of the wide range of his interests and activities is found in the Papers contributed by him to the Proceedings and in the many discussions in which he took part. The Papers are: “Iron and Steel at Low Temperatures,”’ “Dredging Operations and Appliances,” “Fireproof Construction,” and “The Widnes and Runcorn Transporter-Bridge.” For certain of these he was awarded a Telford Medal and Telford premiums.

Mr. Webster’s services were in frequent request by the Board of Trade and for Parliamentary work. In recent years he practised in partnership with Mr. H. W. FitzSimons.

Mr. Webster was elected an Associate Member of the Institution on the 4th July, 1879, and was transferred to the class of Members on the 11th May, 1886.