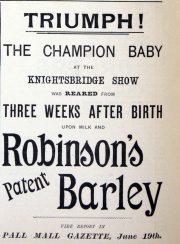 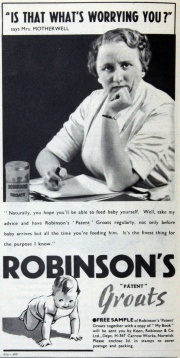 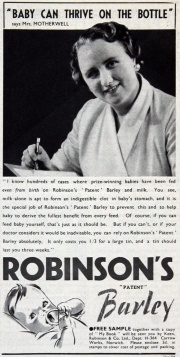 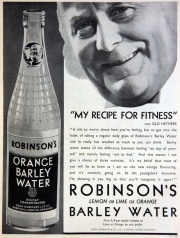 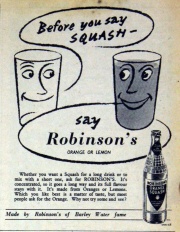 1742 Keen's Mustard first made by Keen and Sons.

1862 Amalgamation with Robinson Belville[1] as Keen, Robinson, Bellville and Co, producer of barley-based drink and of mustard.

1903 Keen Robinson and Co was acquired by rival mustard-maker Colmans, who continued to use the Keen's brand name in Canada and Australia.

1935 Creation of barley water for the Wimbledon tennis championship - a Colman's representative created a drink to refresh and hydrate the players, by combining barley crystals with lemon juice, sugar and water.

1938 After a merger, Colmans became part of Reckitt and Colman.

1992 a special 250th anniversary tin of Keen's Mustard, sold in Canada, contained the following: For over 250 years, Keen's has provided premium quality Dry Mustard to discerning customers around the world. The brand was first manufactured and sold in 1742 by Messers Keen and Sons in the Garlick Hill section of London, England. Keen's quickly established itself as a superior mustard, winning prestigious medals in London, Paris, Moscow, Australia and Philadelphia while also obtaining royal warrants to William IV, Queen Victoria and Napoleon III. Today the tradition continues. Keen's Dry Mustard is manufactured by Colman's of Norwich by appointment to Queen Elizabeth II, and remains the "genuine double superfine" grade. Insist on the very best. Use Keen's Dry Mustard. Imported by Reckitt and Colman Canada Inc. Toronto Ontario M8Z 5M5

1995 Colmans was sold to Unilever which continued to own the brand-name Keen's for the UK domestic market.

1998 McCormick took over the Keen's brand in Canada and Australia. Although historically a maker of dry mustard, since 1963 Keen's has also been available in Canada as a prepared mustard.

2008 Keen's Mustard is now less known, in the UK, than the Robinson's Barley Water drink.