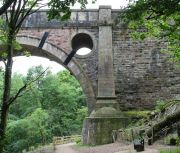 Marple Aqueduct, also known as the Grand Aqueduct, carries the lower level of the Peak Forest Canal across the River Goyt at Marple, Greater Manchester.

Benjamin Outram was responsible for the design, and Thomas Brown was the Resident Engineer. The contract for its construction was placed with William Broadhead, Bethel Furness and William Anderson.

The first stone was laid without ceremony in May 1794. The three arches were keyed in during 1799 and the aqueduct was filled with water in 1800.

The aqueduct contains 8,000 cubic yards of masonry. The semi-circular arches are on 72 feet 4 inches centres. The lower part is of red sandstone, rough hewn from the nearby Hyde Bank quarry, and the upper part is of white stone from Chapel Milton. The abutments widen in well-proportioned curves and batter or diminish upwards in the same manner. The skilful use of architectural features, such as pierced spandrels and string courses, arch rings and pilasters of ashlar stone, oval piers and stone of different type and colour have created a graceful structure.

In 1860, serious frost damage required urgent repair by Charles Sacré, chief engineer of the Manchester, Sheffield and Lincolnshire Railway, which then owned the canal. He tied together the two faces above the central arch by 2-inch bolts through the structure, secured by the plates (see photos). In January 1962 the outer face of the north-east arch collapsed. British Waterways wanted to demolish the aqueduct, but Cheshire County Council funded the extra cost of full restoration, over and above what it would have cost BW to demolish it. The main contractor for the restoration was Harry Fairclough Ltd of Warrington, with Rendel, Palmer and Tritton as the consulting engineers. The aqueduct has since been scheduled as an ancient monument and in 1966 listed Grade I.

The above information is condensed from the Wikipedia entry, which is recommended for further information.

Running along side it to the north is the Marple Viaduct, on the Marple, New Mills and Hayfield Railway that serves Marple Station.