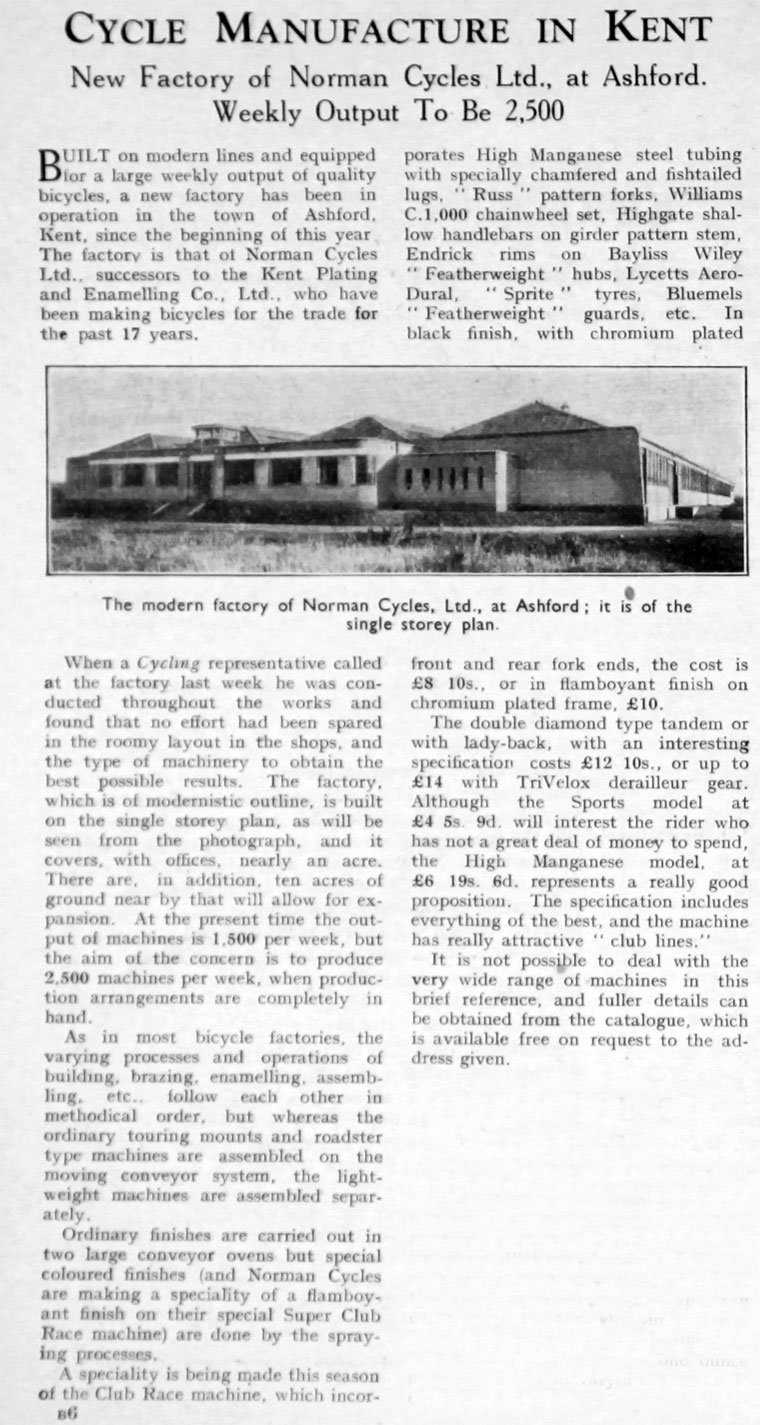 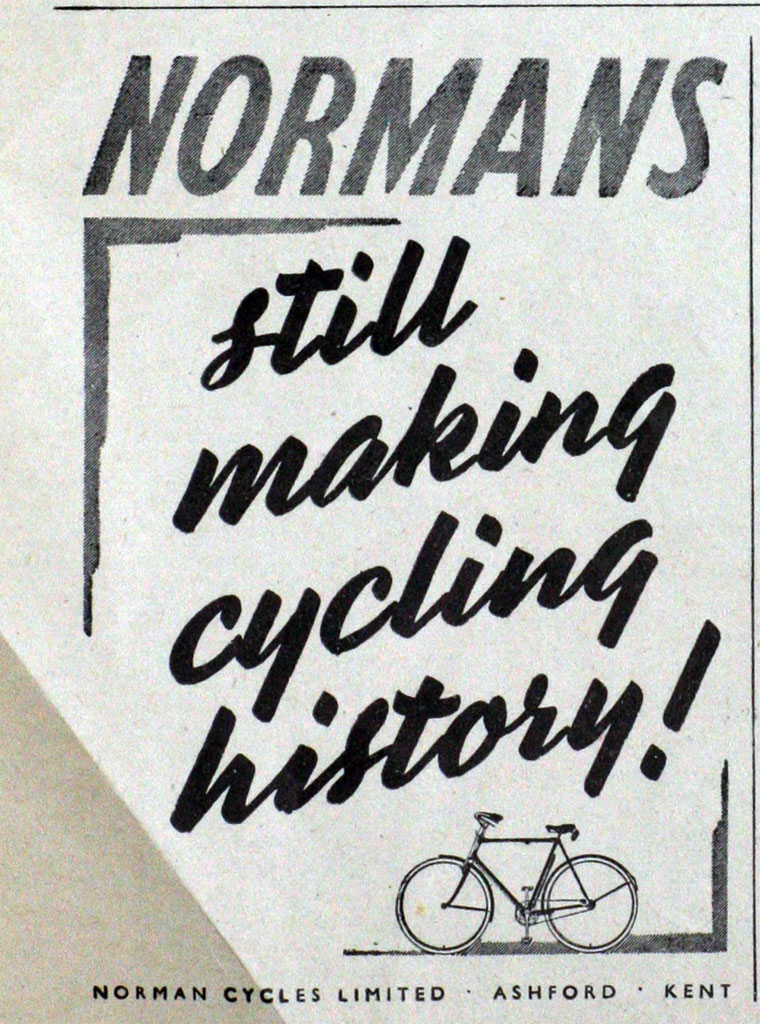 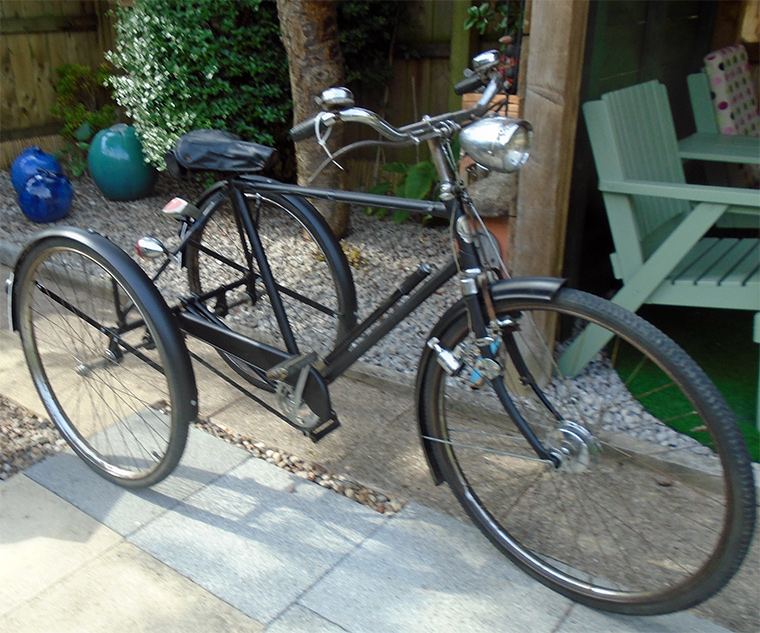 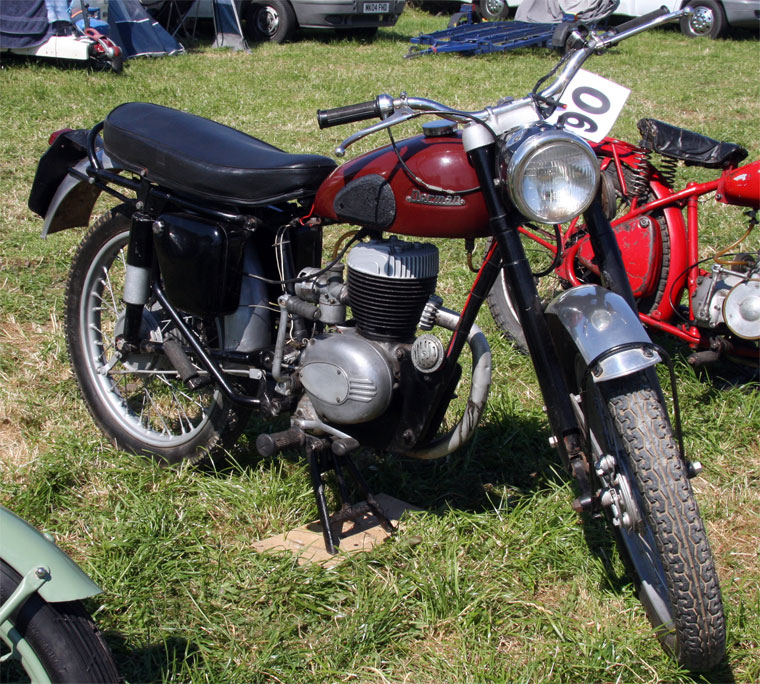 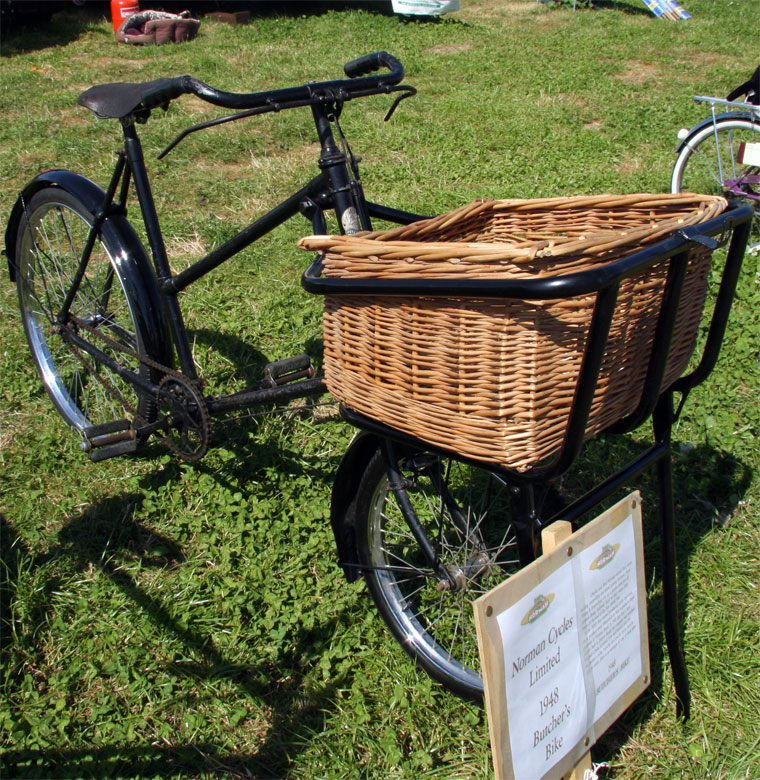 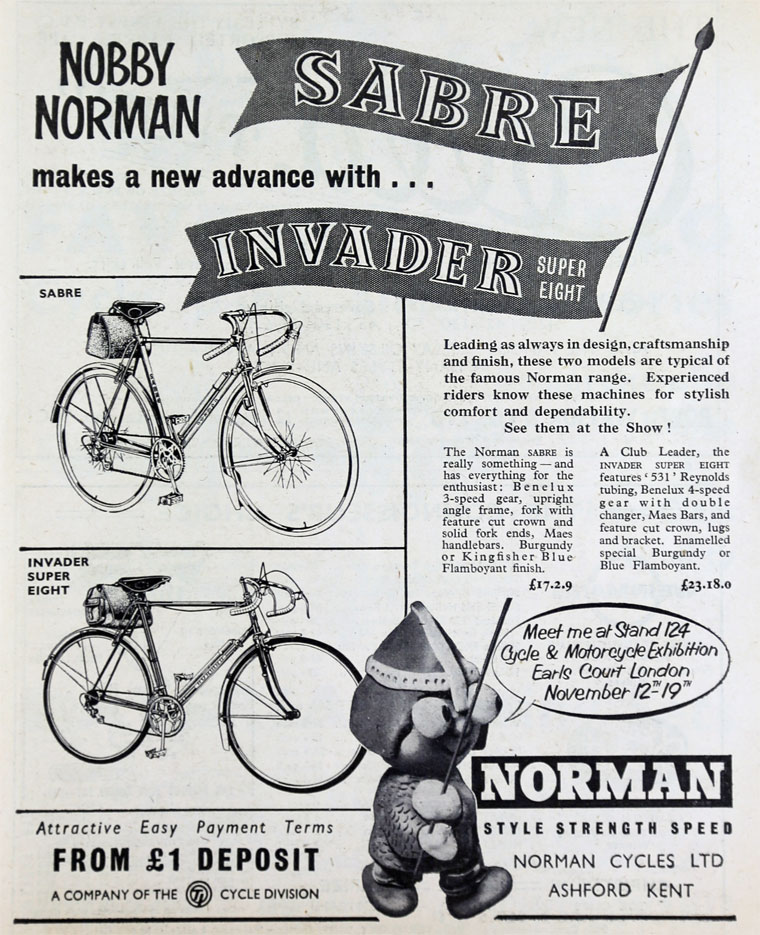 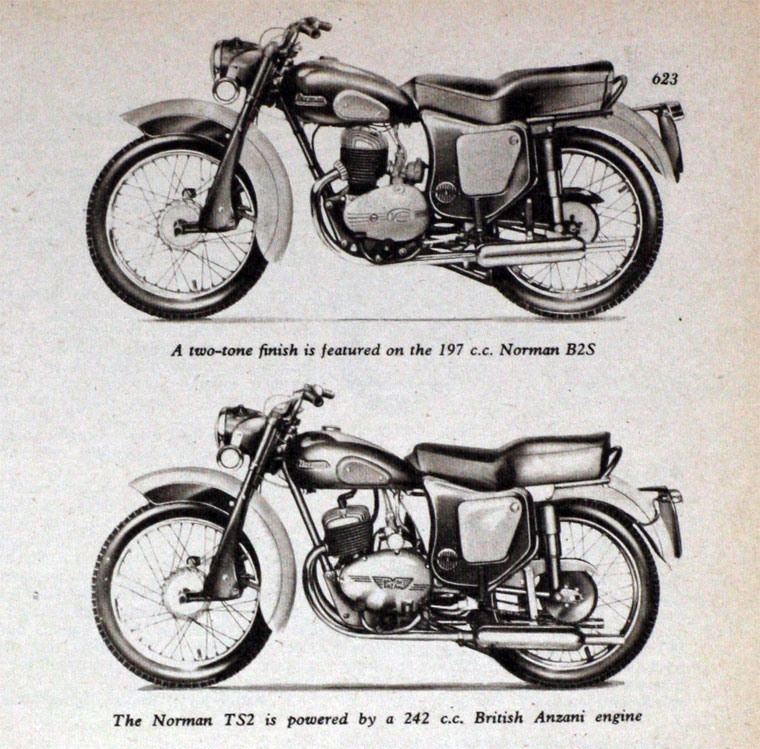 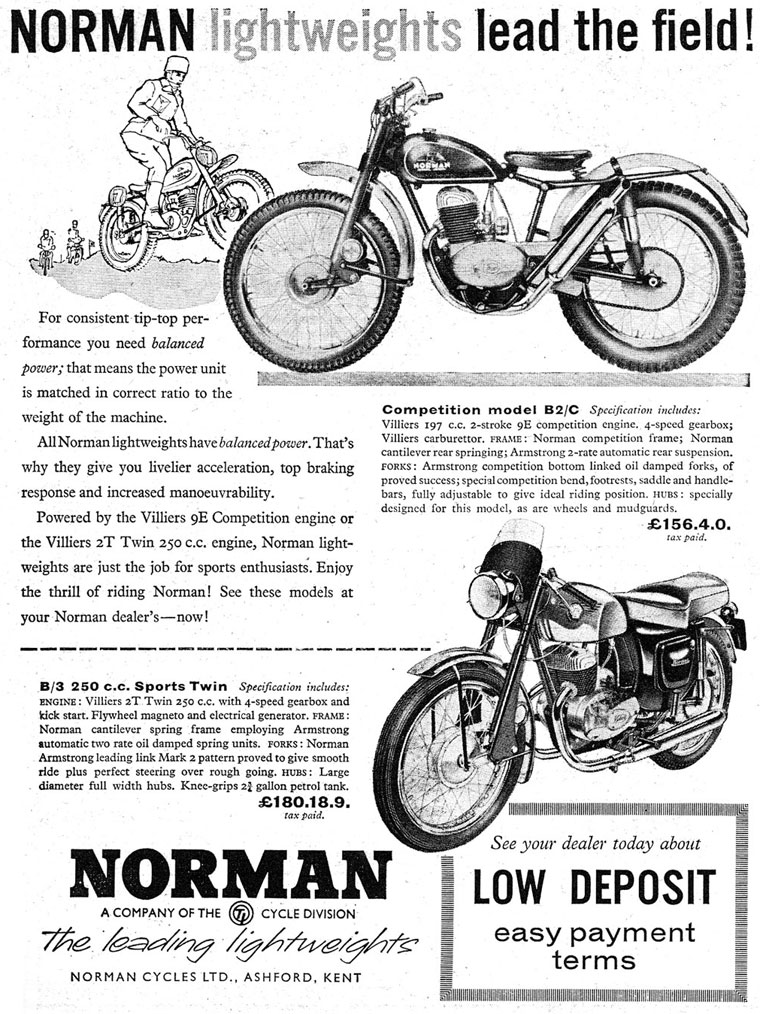 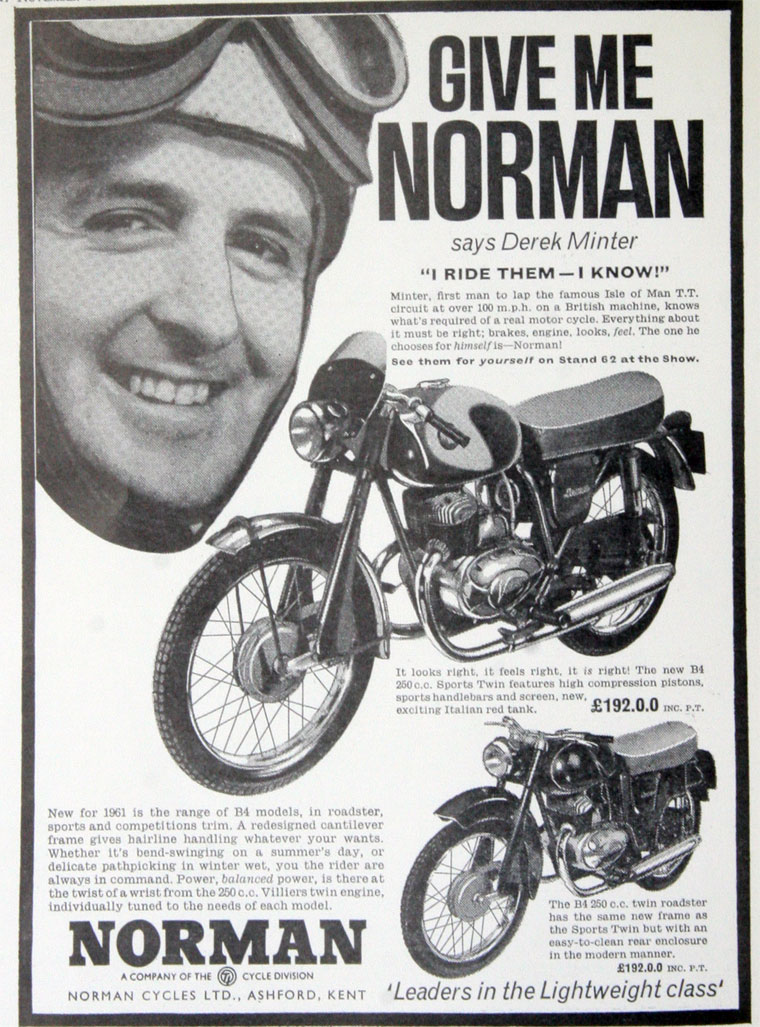 Norman Cycles was a British bicycle, autocycle, moped, and motorcycle manufacturer based in Ashford, Kent. Norman motorcycles were produced from 1939 to 1962.

1920s The Company was founded to make pedal cycles by the Norman brothers, Charles and Fred, on their return from France at the end of the WW1.

1935 Moved to a new factory in Beaver Road, Ashford.

1939 The firm was already well known in the field of bicycle manufacture, and other enterprises, when they entered the powered market that year. They started out with two models: an autocycle with rigid forks, known as the Motobyke; and a 122cc Lightweight. Both were powered by Villiers engines.

1940 The De Luxe model with Webb girder forks joined the range, together with a lower-geared Carrier model and a 98cc version of the Lightweight. That year Norman also made autocycles for Rudge.

Production then stopped until the end of World War II.

1946 Manufacture recommenced with a range all fitted with Villiers engines. These comprised the 98cc Autocycle and the 122cc Motorcycle.

The post-WW2 range were powered by Villiers and Anzani engines.

1949 These became the model C with 99cc Villiers 2F, and model B1 with Villiers 10D engines. Then came the B2, with the 197cc Villiers 6E engine. Both B models were listed in standard and de luxe versions.

1953 Rear suspension was added to create the B1S and the B2S. The B1 became the model E and a competition model, the 197cc B2C, joined the range.

1954 Eight trials machines were entered in the Scottish Six Day event. The models E and B2 were dropped by the end of the year.

1955 The D and B2C were gone by the end of the year and the B1S changed its engine to the 147cc Villiers 30C and a twin. The TS model appeared using the British Anzani engine. In came Armstrong leading-link forks, which were to become standard.

1956 The B2S was listed with the 197cc Villiers 9E engine, and the 8E also remained for the next couple of years. The B2C/S also appeared. New for that year was the 48cc Nippy moped, with a Sachs engine and Continental design.

1957 Also listed was the B1S with an alternative of the 148cc Villiers 31C. Rear enclosure was adopted for most models. At about this time Norman bought the German Achilles tooling. Both Villiers and Sachs engines were used in their Nippy mopeds of that year.

1958 The twin changed its engine to create the B3.

1959 The B3 Sports joined the range. Another version of the moped appeared, with a 50cc Villiers 3K engine, plus the Lido model, with a styled enclosure for the power unit. Over the following few years those models were improved.

Acquired by Tube Investments in the 1950s

1961 The twins were modified to become B4 models, and the competition machines changed to the B4C Trials and the B4C Scrambles. The mopeds were followed by improved versions. Charles and Fred Norman both retired, so the firm was taken over by Raleigh Industries and moved to Smethwick.

1962 Only the twins survived into that year, plus the mopeds based on Raleigh models. Production ceased that year and the Norman name came to an end.

The Norman Cycles Club is based at Willesborough Windmill, in Willesborough, part of Ashford. The Norman Museum is located in the Windmill's barn, where they have some mopeds and bicycles on display.

It was the trade name used by Norman on some export models. They were the same machines apart from the tank badge, although some may well have had minor changes apart from the normal light and speedometer alterations.

Roamer were motorcycles produced after the end of the Second World War, by Norman.

The name, like Rambler, was used for models exported to Australia after the end of the war. The only difference was the tank transfer.