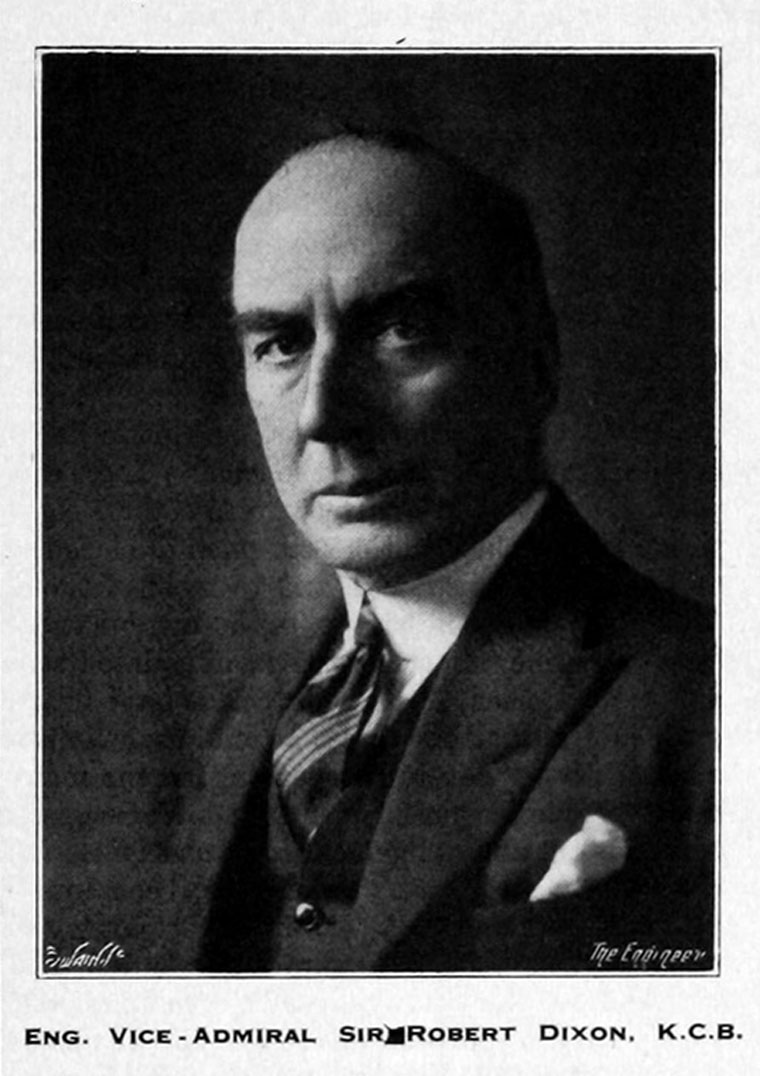 Director of Babcock and Wilcox and Royal Navy Engineer Officer.

1926-1927 - Accepted the presidency of the Junior Institution of Engineers

"THE boiler engineering industry has lost a leading figure and the Royal Navy one of its most outstanding engineer officers of recent years by the death of Engineer Vice-Admiral Sir Robert Dixon, which took place on Friday, July 28th, at Sydney, New South Wales, following a short illness. Sir Robert was on a business journey for Babcock and Wilcox, Ltd., of which he was a director, and had only arrived in Sydney a few weeks ago. In his forty years of service in the Royal Navy, he occupied important positions afloat, and in the Royal Dockyards, while at the Admiralty he rose to be the Engineer-in-Chief of the Fleet, succeeding Sir George Goodwin in June, 1922, and retiring in 1928. On his retirement he joined the board of Babcock and Wilcox, Ltd., and also became interested in several other important engineering firms.

Robert Bland Dixon was born in 1867 at Darlington, and received his education at Queen Elizabeth's Grammar School in that town. He showed great interest in scientific and engineering subjects, and at the age of fifteen years was sent for a six years' course to the Royal Naval Engineering College at Keyham. At the end of that course, which he passed with distinction, he was awarded the rank of Assistant Engineer and went on to the Royal Naval College at Greenwich, which he left in 1891, at the head of a list of brilliant contemporaries. In that year he joined his first ship, HMS Hecla. His next appointment was to the finest battleship then afloat, HMS Trafalgar. A year later he returned to London, and was posted to HMS President to serve as Lecturer and Assistant to the late Professor James H. Cotterill, who was then Professor of Applied Mechanics at the Royal Naval College, Greenwich. He was a clear and convincing lecturer, and his work at Greenwich was greatly appreciated by the engineers and naval architects who attended his classes...[more]

Eng. Vice-Admiral Sir ROBERT BLAND DIXON, K.C.B., D.Eng., had a distinguished career at the Admiralty. For several years he filled the position of Engineer-in-Chief of the Fleet with great ability, and for eleven years after his retirement he held important appointments in several engineering firms. His work for the Institution, of which he was elected a Member in 1922, was also much valued. He was elected a Member of Council in 1926, and re-elected in 1929; he served as Vice-President from 1933 until his death. Moreover, he brought his early experiences in engineering education to bear in the work of the Education Committee, of which he was chairman.

Sir Robert Dixon was born in Darlington in 1867 and was educated at Queen Elizabeth's Grammar School, Darlington, the Royal Naval Engineering College, Devonport, and the Royal Naval College, Greenwich. His first sea appointment was in the special torpedo vessel Hecla, in 1891.

During 1892-3 he served on the Trafalgar, after which he was appointed instructor in applied mechanics at the Royal Naval College, Greenwich. After further service afloat in the Victorious and the Centurion, in China, he returned to the engineer-in-chief's department in the Admiralty in 1898. A year later he became assistant to the chief engineer at Chatham Dockyard, and was placed in charge of the drawing office, and in 1902 was transferred to Portsmouth as first assistant to the chief engineer; subsequently he was appointed to the staff of the Director of Dockyards at the Admiralty. He was later promoted to be engineer commander, and from 1907 to 1909 was Chief Engineer of the Dominion, of the Channel Fleet. From 1909 to 1912 he held the position of Chief Engineer of Haulbowline Dockyard, Queenstown, returning to the Admiralty three years later as a member of a committee appointed to inquire into the education and training of cadets. He received special recognition for his work on this committee, and in 1912 he was made engineer manager of Portsmouth Dockyard, being promoted to the rank of engineer captain in 1915. In 1917 he became Assistant Director of Dockyards at the Admiralty, and three years later he was appointed Deputy Engineer-in-Chief of the Navy, under Sir George Goodwin, Hon.M.I.Mech.E., whom he succeeded in 1922. His promotion to the rank of engineer rear-admiral had come in 1919 and he was made engineer vice-admiral in 1922.

He was created C.B. (Civil) in. 1918, in recognition of the services which he rendered during the Great War, and in 1924 he was advanced to K.C.B. The honorary degree of Doctor of Engineering was conferred upon him by the University of Sheffield in 1926. Sir Robert Dixon was responsible for the developments in the machinery designs of the battleships Nelson and Rodney, and of the Kent class cruisers. After his retirement in 1928 he became a director of Messrs. Babcock and Wilcox, Ltd., and it was during a business visit to Australia in this capacity that his death occurred in Sydney on 28th July 1939. He was also on the board of directors of Messrs. Dick, Kerr and Company, Ltd. In addition to his work for The Institution of Mechanical Engineers, he also keenly supported a number of other technical institutions, and was a past-president of the Institute of Marine Engineers, and a vice-president of the Institution of Naval Architects. He was also associated with the work of the Department of Scientific and Industrial Research.

A man of outstanding abilities, he had done much to raise the engineering side of the Navy to the position which it holds to-day.

He was born at Darlington, in Yorkshire, educated at the Queen Elizabeth Grammar School there, and entered the Naval Engineering College at Koyham in 1882. His work here showed consider- able promise, and at the end of six years he was chosen for a further advanced course at the R.N.C., Greenwich, which he left, at the head of the list, in 1891. After two years' service at sea, Dixon returned to Greenwich as an Instructor in applied mechanics. He left to serve again at sea, and was recalled for his first Admiralty appointment in 1898.

The next year he was appointed to Chatham as assistant to the Chief Engineer, transferred two years later to Portsmouth, and again after a further two years to the Staff of the Director of Dockyards. Dixon was by now promoted to Engineer Commander, and he took up his last sea appointment in 1907, when he served as chief engineer of the battleship Dominion.

In 1909 he was appointed Chief Engineer of Haulbowline Dockyard, Queenstown, and in 1912 served for six months on a committee investigating the training of naval cadets.

From 1912 to 1917, Dixon was Engineering Manager at Portsmouth Dockyard, being promoted to Engineer Captain in 1915. He returned to the Admiralty in 1917 as Assistant Engineer to the Director of Dockyards. Two years later, now promoted to Engineer Rear-Admiral, he was appointed as assistant to Sir George Goodwin, whom he succeeded in June 1922 as Engineer-in-Chief.

On his retirement in 1928, Sir Robert Dixon joined the board of directors of Messrs. Babcock and Wilcox Limited, becoming chairman of two associated companies. He was a member of many naval and engineering institutes and was a Past President of the Institute of Marine Engineers, and a vice-president of the Institution of Naval Architects, and of the Institution of Mechanical Engineers. In 1918 he was created C.B. and advanced to K.C.B. in 1924; in 1926 the honorary degree of D.Eng. was conferred on him by Sheffield University.

Sir Robert Dixon was elected a member of the Institute of Metals in 1913. He provided valuable service as a Member of Council from 1921 to 1926 and from 1933 to 1937, and also as a Vice-President from 1926 to 1928 and again from 1937 until the time of his death. Since 1935 Sir Robert had occupied with distinction the office of Chairman of the Finance and General Purposes Committee.